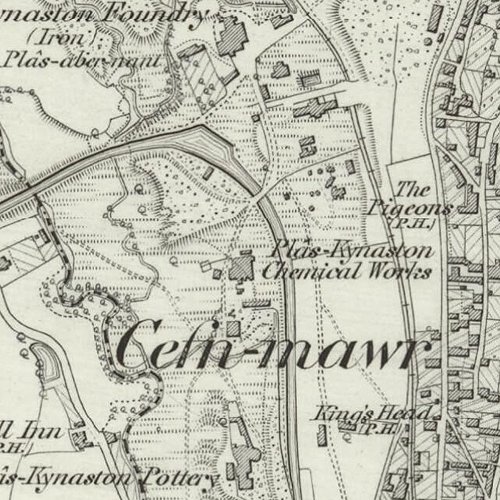 A newpaper description of the Flintshire oil industry, printed in 1865, speaks of a "remarkable pit of cannel coal at Plas Kynaston, just by the railway site". This pit presumable supplied a number of oil businesses that existed in the Cefn Mawr area, which seem to have been known collectively as Plaskynaston Oil Works.

The earliest reference so far located is an advertisement (below), dated August 1866 for the sale of the plant and newly erected oil works, including four retorts and other refinery equipment, on behalf of C.F. Earp and Co, of Cefn Oil Works.

The following month, September 1866, an advertisement was published for the sale of Plaskynaston Oil Works following the bankcruptcy of George Darlington. This describes the equipment and contents as "entirely new". It seems probable that these premises were bought and developed by the firm of Crowther and Graesser, probably in 1867, and developed as Plaskynaston Chemical Works.

Two other companies appear to have produced oil at Plaskynaston during the late 1860's. The premises operated by George Lamb, described in a sales notice of August 1869 (below), was a small scale affair, with only four retorts. Little is known of the firm of Joseph Holmes, other than he operated a number of American-designed "meerschaum" retorts at Cefn.

Crowther and Graesser describe themselves as "manufacturing and analytical chemists" in a press advertisment that ran during 1869 and 1870, supplying a range of chemicals in addition to oils and greases . The partnership was dissolved in 1872, and operation of the works taken over by others, however Graesser retained ownership of the property and took control of the works again in 1892.

The first edition OS map, surveyed in 1872, illustrates a complicated and diverse industrial landscape. The buildings labelled "Plaskynaston Chemical Works" seem likely to the premises of Crowther and Graesser, linked by a circuitous tramway to Plaskynaston Colliery; perhaps the "pit just by the railway site" described in the 1865 account. The tramway terminate beside a long narrow structure, perhaps bench of retorts. A number of small structures to the north east of the main chemical works building might relate to the smaller oil operations on site

According to a website devoted to the history of Plas Kynaston and Cefn Mawr:

"In 1867 Robert Ferdinand Graesser, an industrial chemist from Obermosel in Saxony, established a chemical works at Plas Kynaston to extract paraffin oil and wax from the local shale. The company later expanded into the production of coal tar, carbolic acid and phenol. The site soon became the world's leading phenol producer. In 1919 the US chemical company Monsanto entered into a partnership with Graesser's chemical works to produce vanillin, salicylic acid, aspirin and later rubber. The works now ceased by Flexsys, a subsidiary of Solutia."

Number of retorts: Not known. 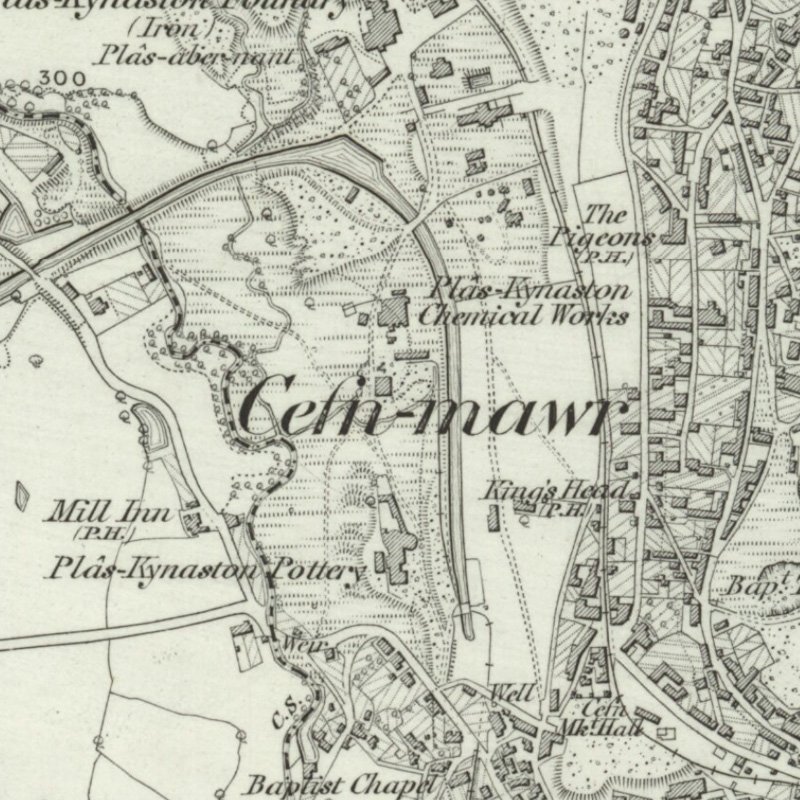 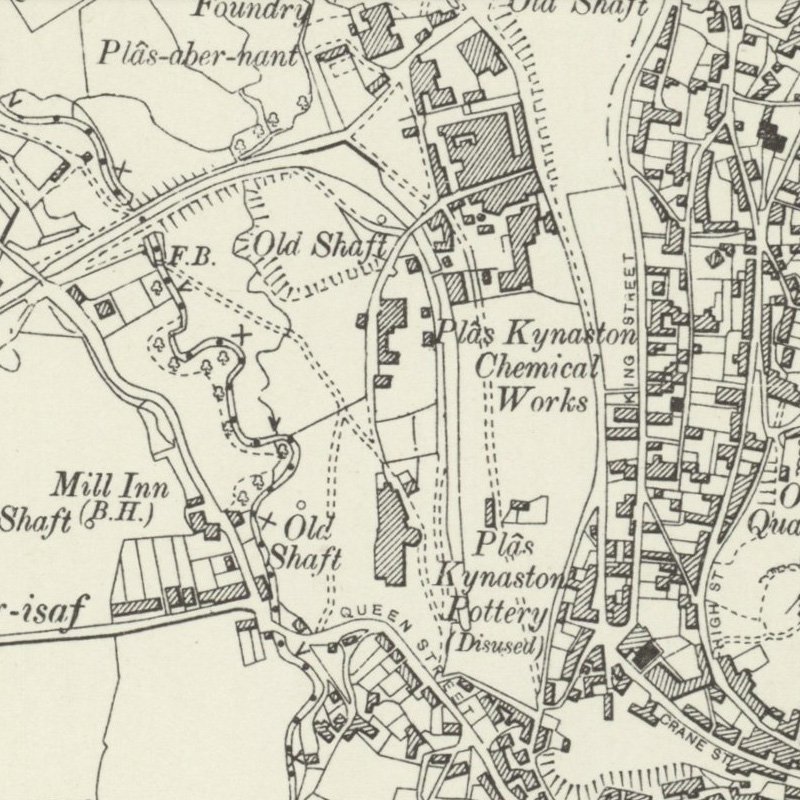 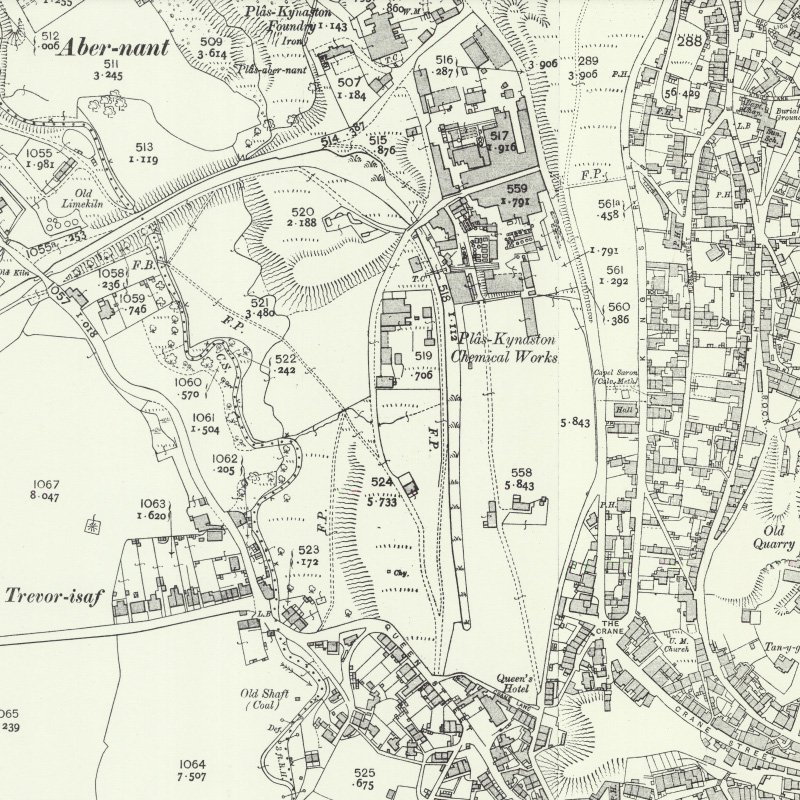 CEFN. Important Discovery.— A few months ago, we announced that the Plaskynaston and Cefn Collieries had passed into the hands of a company of Lancashire capitalists, who were likely to develop the seams of coal therein existing, and which had not hitherto been worked. This company have now sank down to the yard coal seam on the deep side of the Cefn Fault, which turns out be a splendid bed of "cannel," five feet four inches thick, and of first-rate quality. This discovery will certainly the harbinger a new era of prosiperity to the south Ruabon district, and we with pleasure congratulate the inhabitants and the company upon the discovery

SALE BY MR. MOXON. CEFN-MAWR, NEAR RUABON.—PLASKYNASTON OILWORKS. RE GEORGE DARLINGTON, a Bankrupt.—important Sale of the Tenant's Interest of and in a Lucrative Business Plant, comprising entirely New Apparatus, with retorts, condensers, wrought iron cisterns, casks, oil in casks and cisterns, several tons of cannel shale, waggons rails, barrows, timber, tramway, Ac. MR. MOXON begs to announce the receipt of instructions from the Assignees of Mr George Darlington, a Bankrupt, to SELL BY AUCTION, in one lot, on the above named premises at Cefn-Mawr, near Ruabon, on Friday, the 28th day of September instant, two o'clock in the afternoon, subject to conditions to be then produced, the Tenant's interest in a Lease dated the 20th day of February, 1865, granted to the said George Darlington for a term of year, at yearly rent of £6 17s. 6d.. and also all the newly erected and valuable Plant and Effects above named. For further particulars apply the Auctioneer, 31, Cooper street, Manchester; or to Mr John Leigh, 30, Brown-street, Manchester, Solicitor to the Assignees.

USING ABUSIVE LANGUAGE. Joseph Stubbs was brought up under a warrant, charged with using abusive language towards one Edgar Tomlin Jerrold, analytical chemist to the Plaskynaston Oil Company —The clerk read the depositions of Harriet Jones made before Colonel Price when the warrant was granted. This witness stated that prisoner came to her house where complainant lodged, and said would kill the rascal (meaning complainant) if he could get at him. He went away and came again and said, " You have got him here; I will find him; I will kill him this night " He was drunk at the time - Complainant said prisoner was a workman under him, and he had behaved like brother to him. Taught him everything could in connection with the oil works. He once wrote a letter against him to Carruthers, the proprietor of the works. Charged him with writing the letter, but denied it.

Fire at Oil Work;. — On Tuesday morning a fire took place at Messrs Crowther and Co's oil works at Plaskynaston, which created considerable alarm for a short time. It would appear the fire was caused by the overheating of the refining plant, causing combustion of the oil while undergoing the preparatory process. The oil blazed rapidly, and water had no effect in extinguishing it, but a number of men soon put it out by throwing earth upon it. About 500 gallons of oil were destroyed, but little damage was done to the works.

To the Editor of the Wrexham Advertiser. Sir, — Our attention has been called by a customer to a paragraph under the above heading in your impression of Saturday, the 9th inst., about which we would not have troubled you had it not been calculated to do us an injury; we must, therefore, ask you to insert a short paragraph correcting the matter. The fire was caused by a leakage in a joint of the distilling apparatus directly over the fire place, the oil from such leakage running into the fire and igniting caused a few casks in the immediate neighbourhood to take fire, and part of their contents — not 500, but about 60 gallons were destroyed. Water was not thrown on for the purpose of extinguishing the flames ; a quantity of soil and ashes were thrown on for such purpose, and subsequently a few buckets of water were thrown upon such ashes and soil for the purpose of damping and making them lie closer. You will perceive on consideration that the paragraph in question may have led persons to infer that our burning oil is explosive, and thus prevent our selling it, such not being the case. The government requirement is that the oil be non-explosive below 110, whilst ours is not explosive below 120 ; but, in fact, there was no explosion, neither was there any fire inside the apparatus ; we there fore trust your sense of fairness to us will induce you to set this matter right before the public. — Yours truly, Crowther & Graesser.

SALE at the PLASKYNASTON OIL WORKS, Cefn Mawr, Ruabon, Denbighshire. MESSRS BAUGH and JONES have been instructed by the Trustee of the Estate of Mr Frederick Lambe to offer for SALE by AUCTION, on Tuesday, 3rd August, 1869, upon the above premises, unless previously disposed of by private treaty, of which due notice will be given, the whole of the valuable PLANT, MACHINERY, and other Effects, comprising:

The site of the works and premises containing 4,s7s superficial square yards, held under lease, dated 20th February, for the term of years, at the annual ground rent £5 with the erections thereon, which comprise still house, engine house with chimney stack, store room, cooperage, and office, all brick built and recent erection, will sold in one lot (subject conditions.) Sale at Eleven o'clock prompt. For descriptive catalogues, apply to the Auctioneers -

Pollution of a Stream. — Peter Greaser, one of the proprietors of the Plaskynaston Oil Works, was summoned for allowing certain Liquid poisonous matter to run into a brook passing the works........On the 27th of June I visited the parafine oil works at the Cefn. There is a brook passing the works which runs into an adjoining stream, then into the river Dee, which is a salmon river. The works are drained into a dam, then into the brook. The dam was full of liquid, and the bank between the dam and the brook is only nine inches. The liquid was under the embankment — there was an opening for that purpose. The liquid was like coal tar and water mixed........The defendant had only had the works twelve months and he was more interested than any one else that what had been called refuse was not wanted, as it was valuable, and he had gone to great expense in making the dam to prevent it going into the brook.

GOING TO CHAPEL AND GETTING AMONGST BAD COMPANY. Christopher Beirne was in custody under the following circumstances : — P.G. R. Jones said that on Sunday evening he found the prisoner drunk and a sleep in Penybryn. He was in a very bad state. In locking him up they had to get the assistance of three or four civilians...... He worked for Messrs Crowther and Graesser, of the Plaskynaston Oil Works, Cefn, and came to town to the Roman Catholic Chapel, but it was so wet that he could not go back.

WREXHAM BANKRUPTCY COURT. Tuesday, April 10th. Re EDWARD CORBETT, Edward Corbett. junr., of Plaskynaston Chemical Works, near Ruabon, was examined. His liabilities were stated to be £65 4s 2d ; assets, £8 10s 4d ; deficiency, £56 13s 10d. Mr Poyser appeared for a creditor. — The bankrupt commenced business in 1876 with about £1,100 capital, lent by his father, which had been repaid by instalments. He was first in partnership with a Mr Athol, who had been manager of the works. They were short of capital, and a Mr Black became a partner in 1877. He put £2,000 into the Plaskynaston Works, and £1,000 into some works in Manchester. The works in Manchester did not pay. Mr Athol shortly afterwards retired, and the partnership between bankrupt and Mr Black terminated in 1881 or 1882. Bankrupt borrowed £3,000 on a mortgage of the works from Mr Graesser; in order to pay Mr Black out. He carried on the business alone until August, 1891, when he made a private arrangement with his creditors. He could not say what his liabilities were, but Mr Graesser took over the works, and was to pay his creditors 6s in the £. Since that time he had carried on no business. He had done a small business as commission agent. He had lost £91 in a patent medicine speculation, and he had also lost in connection with a speculation in carbolic acid. — The examination was closed.