The firm of Joseph Turner & Co. was established in c.1860 as manufacturers of printing ink, based in Chester. (The Cheshire Post Office trade directory of 1857 lists Major & Turner, printing ink manufacturer, of Great Broughton, Chester). Available evidence suggests that they constructed the major Queen's Ferry Chemical works during the oil boom of the 1864-5; perhaps as an oil refinery, and also operated a crude oil works at Padeswood, which was discontinued in 1871.

The chemical business continued to expand and diversify, and was well-placed to refine the coal tars produced in the coke ovens of the North Wales steel industry. The firm was formed into a limited company in 1884, and merged into the Midland Tar Distillers Ltd in 1933. 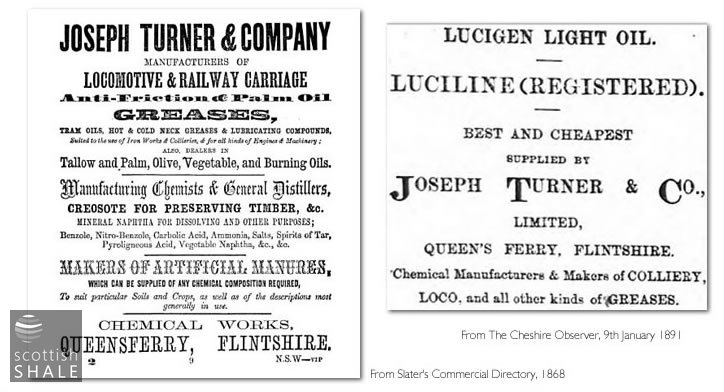 DESIRABLE INVESTMENT. —To be Sold, with immediate session, the Machinery, plant, and Stock-ln-Trade of a Printing Ink Manufacturer, consisting of Steam-engine and shafting, mills, mixers, varnish and oil cisterns, with every requisite for carrying out extensive and lucrative business. The Stock-in-Trade consists inks, varnishes, colours, etc.. with few printing presses and furniture. The above will be disposed of on advantageous terms, and all necessary instruction given to master the manufacture, with ample reasons for declining this branch of the business, For particulars apply to Mr. Joseph Turner. Broughton Chemical Works, Chester

WANTED, a Gentleman good business habits to Solicit Orders for Printing and Lithographic Inks and Varnishes, Paints, Greases, Lubricating Compounds, and other articles in general use. Must find security to a reasonable amount.—Apply, by letter prepaid, to Joseph Turner and Co., Queensferry Chemical Works, Flintshire

Joseph Turner, of Queens Ferry is giving up the Oil Business at Padeswood to sale by auction on Monday September 11th commencing at 11 o'clock am to the minute. The whole of costly and modern plant and machinery including retorts, condensers, revolvers, and necessary appliances, horizontal steam engine, 3ft stroke with Cornish Boiler and fittings, separators, pipes and receiving tanks, large brick covered tanks with lids and separator, large cast-iron stove etc.

HEAVY FAILURE AT QUEEN'S FERRY.
Joseph Turner, manufacturing chemist, Queen's Ferry and Hawarden, appeared for public examination in bankruptcy. The liabilities ware stated at £3,513, but it transpired at the creditors' meeting on Monday that £2,700 more would rank, making the total liabilities £6,200 in round figures. The assets consisted only of the debtor's furniture and a certain amount of rent, amounting altogether to about £500. At the creditors' meeting it was explained that the debtor's shares in the firm of Joseph Turner and Co., limited, amounting to a nominal value of £8,000, had lately been forfeited to the company on account of non- payment of calls thereon. An offer of 2s in the £ was submitted, which it was understood was considerably more than the estate, it realised in bankruptcy, would offer, but which the debtor hoped to be able to pay by that assistance of friends. At the public examination it was stated that the alleged causes of failure were losses in business, depreciation in shares of the company, and loss on works at Gateshead by fire.

The Official Receiver's written observations on the case were to the effect that the debtor intended to propose a composition. The immediate pressure that led to the petition was an adverse judgement in an action against the debtor as guarantor for an insolvent person with whom he had business relations. The was he scheduled greatly exceeded the deficiency shown in the above statement, and the particulars given might be summarised thus:— Bad debts £5,575, losses in colliery £3,100, disastrous Fire £6,000, loss on contracts in 1883 and 1884 £6,000, total £20,675. In 1884 the debtor sold his business at Queen's Ferry to a limited company partly for cash and partly for shares. The company had a mortgage on those shares and a second mortgage on the house to secure loans, made to the debtor. On the application of the Official Receiver the examination was adjourned for the filing of additional accounts.