William Charles Hussey Jones, co-proprietor of Leeswood Green colliery, is credited with the discovery of the oil-rich Leeswood cannel coal that spawned the coal oil industry in North Wales. In 1861 Jones obtained a licence to use Young's patent to manufacture oil, but little appears to have come from this, however later that year, Jones contracted to supply cannel coal to Fernie and Carter for oil production at their Leeswood and Saltney works. It appears however that Jones had difficulties in meeting the requirements of this contract

The London, Leeswood and Erith company was established to purchase the mineral interests of Jones and associates in the Leeswood area, including the contract to supply cannel to Fernie and Carter. 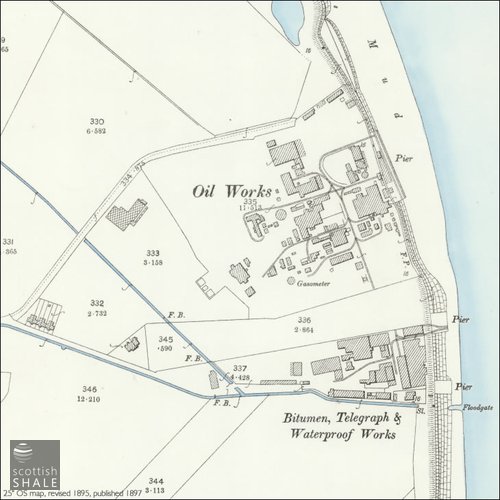 The Articles of Association of the company also make reference to a lease of 20 acres of land at Erith in Kent. It is uncertain whether the intention was to construct oil works on that site, and whether there was any association with the Belvedere Oil Works of Charles Price & Co, that operated in the Victorian era and into the 20th century.

"our whole clerical staff consists of one office boy; our commercial transactions being conducted in London"

The company were also owners of a coal and cannel pit (the Pont-y-Bodkin colliery) and are listed as coal masters in the 1868 Slater's Trade Directory of Wales. A substantial dinner, laid on by the company for their workforce, was reported in the Wrexham Advertiser of 5th January 1867. Between speeches and songs, mention was made of the company's "two branches of work" and toasts were drunk to "the company" and for "health to the working classes". It was also reported;

"When the workmen enjoyed their treat twelve months ago, there were two companies, one of which gave a treat to the men; but now they were under one board of directors, and he (the chairman) felt anxious that the men under him should be met by him according to the old custom, to exchange a little friendly feeling; and so he wrote to the board of directors, who lived at a distance, but who still had the welfare of the workmen at heart, and the secretary replied that they were to have their treat at the expense of the company."

The reference to two companies now under one board of directors is partly explained by a reference in the Wrexham Advertiser of 13th January 1866 - one year previous.

"On Saturday last, W. M. Williams, esq of the Patent Oil Works, Pontybodkin, gave his workmen a good substantial dinner and plenty of cwrw da, a custom he has carried out every year since he commenced oil making."

Second edition OS maps (c.1898) show the Erith Brick, Tile and Terracotta works (operated by the Erith Brick Tile and Terracotta Co.) on a site slightly north of the presumed site of Pont-y-bodkin oil works. It is unclear what connection, if any, existed between the proprietors of the brick works and those of the oil works. There remains an "Erith Street" in the nearby village of Leeswood.

1.) It has been represented by William Charles Hussey Jones Esq., one of the promoters of the company, to other promoters, that he is entitled for a term of years to mines, minerals, coal, cannel coal, slack, fire-clay and brick-clay under part of certain farm called tryddyn, in the county of Flint, containing about 130 acres, with powers of working the same, by virtue of a lease granted by the Trustees of the Lord Dungannon, and dated 12th of August 1857, subject to the payment of rents and royalties, and to the performance of the covenants and conditions contained in the lease.

2.) It has also been represented by Mr. W.C.H. Jones to the other promoters that he and Mr. Henry Jones are entitled, for a term of years, to the mines of coal, cannel, and ironstone, under a piece of land containing about 6 acres, 2 roods and 30 perches, by the same more or less, situate in Leeswood in the county of Flint with powers of working the same by virtue of an underlease from Mr. Edward Oakeley and the Coed Talon Colliery Co. Ltd., dated 9th July 1861, subject to the payment of rent and royalties, and to the performance of the covenants and conditions contained in the underlease.

4.) A provisional agreement, dated the 29th day of September 1864, had been entered into by Messrs R.C. Price and T.W. Keates (two of the promoters), on behalf of the company with Messrs Jones and Tyndall for the purchase of the rights of the Messrs Jones under the lease and underlease of the mines and minerals above mentioned, and for the purchase from Mr. W.C.H. Jones and Mr. Tyndall of the above-mentioned royalties, and binding Mr. W.C.H. Jones to procure the lease of the mines and minerals under other lands near the land comprised in the underlease to be made to him upon certain terms, and then to assign the same to the company.

5.) The consideration agreed to be given by the company for the assignment to them of the royalty is £20,000, and for the other benefits derived by them under the provisional agreement £28,000. The £28,000 is to be taken by Mr W.C.H. Jones and Mr. H. Jones in shares of the company considered as fully paid up. The £20,000 is to be paid by the Company to Mr Jones and Mr Tyndall in the manner following; that is to say - £4,000 within two months after the sum of £2 has been paid to him y six half-yearly installments of £2,200 each, and one half yearly installment of £2,800, but without interest; but no payment is to be made unless the calls of £2 per share shale have been paid on 5,200 shares.

6.) Provisional agreement has also been made between Messrs W.C.H. Jones and H. Jones (two of the promoters), on behalf of the company, with Messrs Ralph Charles Price and Arthur James Prices, who are also two of the promoters. This agreement is dated 29th September 1864, and by it Messrs Price agree to lease the Company about 20 acres of land at Erith, in Kent, for a term of 63 years, at a rent of £750, with option to the company to purchase the reversion at any time within five years from the date of the lease, giving six months notice to the lessors at the price of £15,000

From the Articles of Association of the London, Leeswood & Erith Mineral Oil Co. Ltd, January 1864