Oil Depots and Offices throughout Scotland 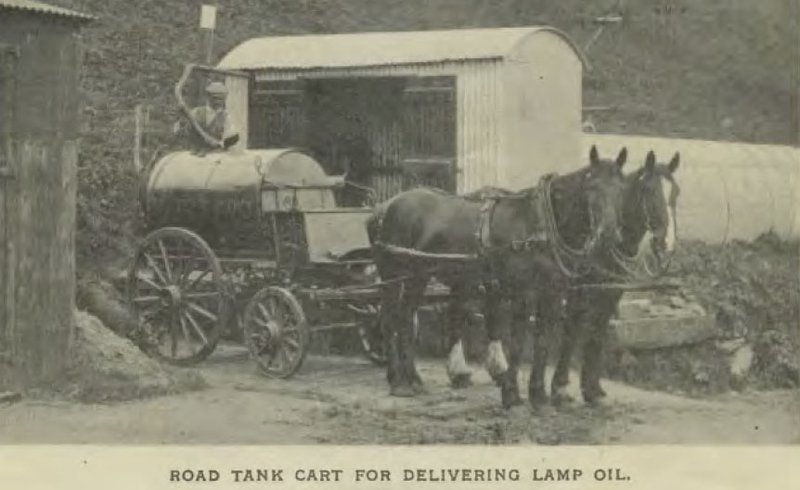 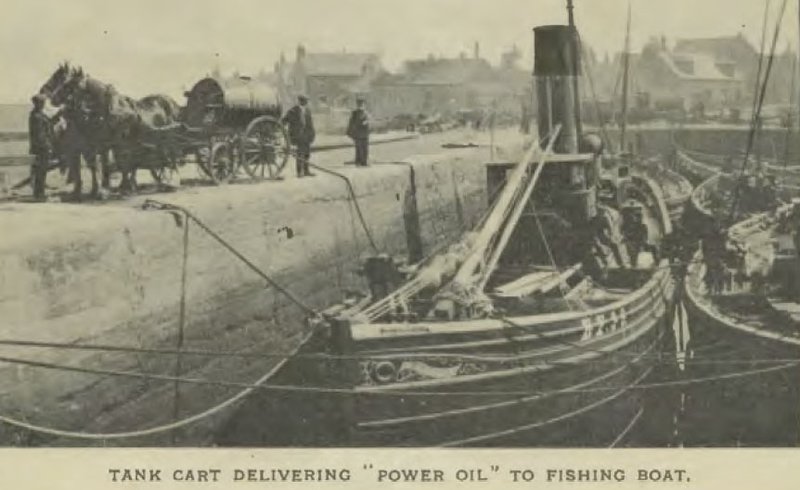 In 1908 the Anglo American Oil Company introduced the first horse-drawn oil tankers to the streets of Scotland’s major cities. Until then, individual barrels of paraffin or other burning oil were dispatched from the refinery to the retailer by railway wagon. The new American system of bulk transport saw full rail tankers of oil dispatched from the refinery (or bulk storage depot) to a network of smaller depots sited close to railway lines in the centre of towns and cities. From these depots, horse-drawn tankers would journey a few miles to local ironmongers, grocers, and other retailers of lamp oil, using a hose to fill small storage tanks within these shops. This innovation saved the cost and nuisance of returning barrels and other containers, and provided Anglo-American with brightly painted moving advertisements for their company products that paraded through the hearts of Scottish towns.

The Scottish shale oil companies were alarmed by this American intrusion, but failed to agree on collective action to combat this competition. Instead the Pumpherston, Oakbank and Young's oil companies major established their own country-wide network of distribution depots served by their own fleet of horse-drawn delivery tankers. In many instance the Scottish shale oil companies set up depots in the same small town, wastefully competing with each other, and seldom matching the scale and efficiency of their American rivals.

The stakes were raised when the American company began to use motor lorry tankers, which were able to serve a much larger area surrounding a distribution depot. In 1910 the progressive Pumpherston Oil Co. purchased its first motor tanker, and within five years many of the Scottish oil companies had built up a substantial fleet of motor vehicles, usually built by Scottish manufacturers such as Albion or Halley. In the years immediately prior to the First World War, many of the Scottish oil companies opened new depots in towns throughout Scotland. A total of 111 depots were in operation by 1918. . 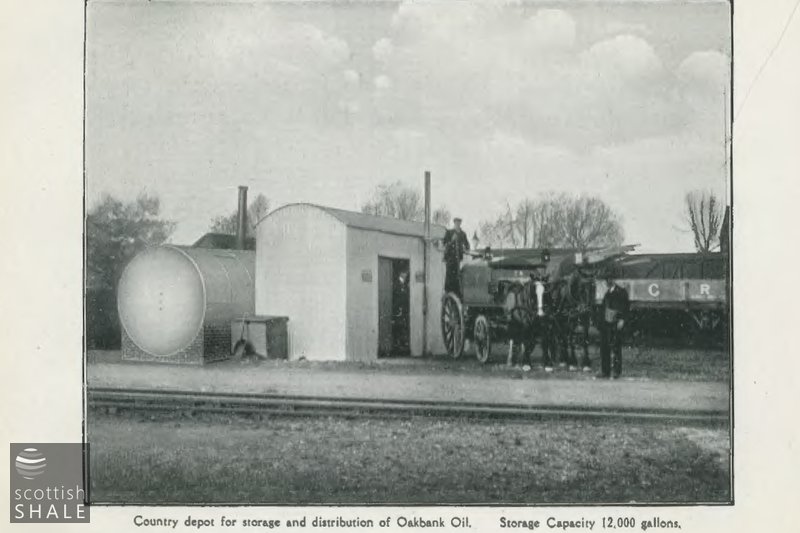 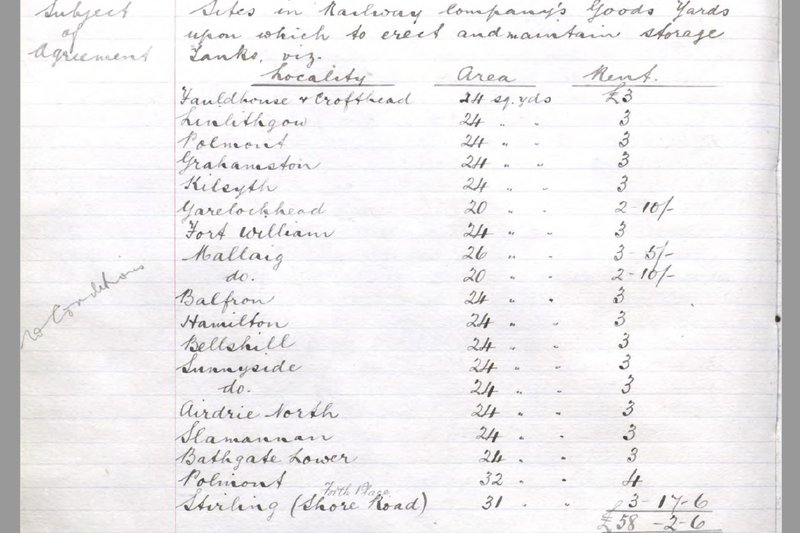 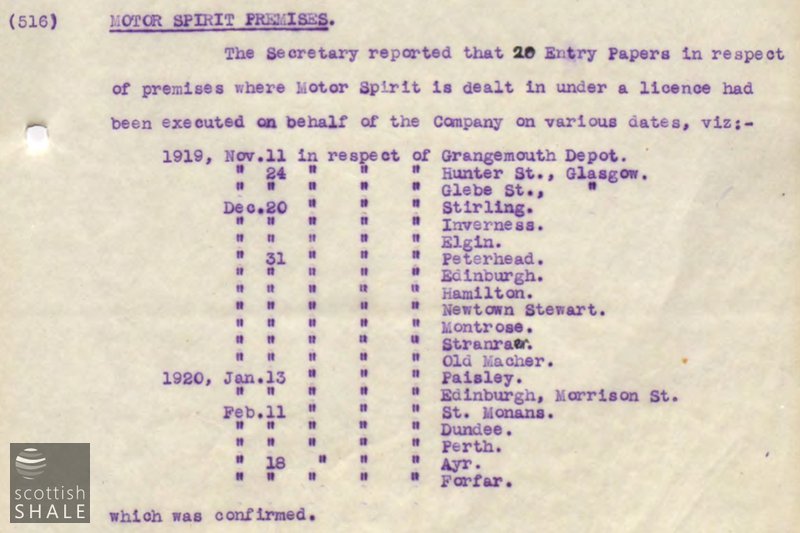 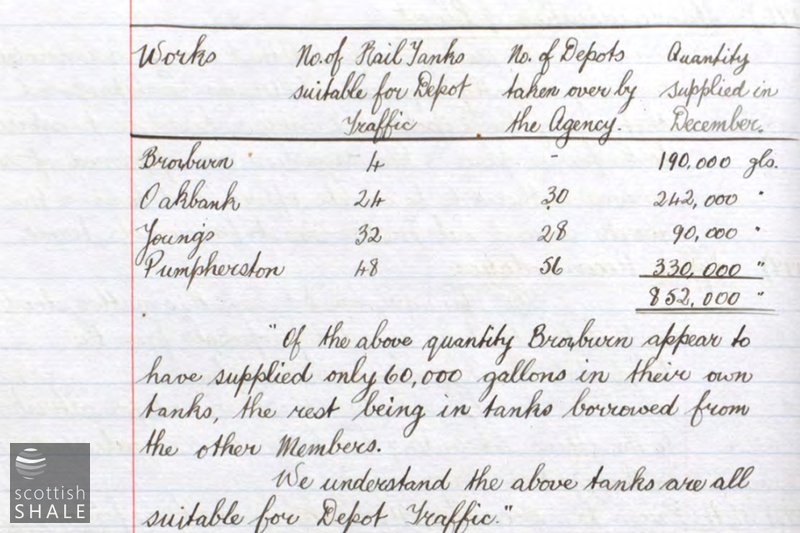 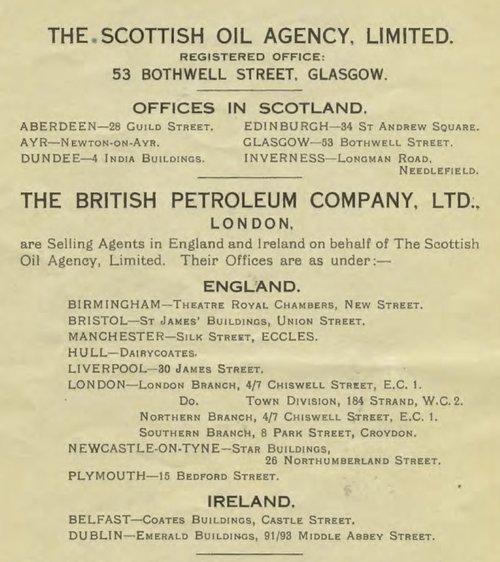 The rise of motor transport following the war encouraged the further bulk distribution of motor spirit (petrol), superceding the old method of transport in two gallon tins. In the early 1920's the Scottish Oil Agency closed many of the 114 depots and tanks it had inherited from the shale companies, as they often covered overlapping areas, or were not suited to the needs of motor transport. The Scottish Oil agency then established a network of new rail-linked depots serving towns and country areas throughout Scotland, for the distribution of both burning oil and motor spirit. Over 15 depots were opened across Scotland, from Stranraer and Wick.

Buildings at most of these depots were clad in corrugated iron, with distinctive curved roofs, and a tall "unclimbable" perimeter fence made from corrugated iron sheets. A few depots were directly served by their own railway siding, however in most a "surface box" was installed beside the rails in a goods yard or some other existing siding. The railway tank wagons would be coupled by hose to the surface box, from where the oil was pumped along a 3" underground pipeline to storage tanks within the oil depot. Road tankers were filled from the storage tanks, and these vehicles were often garaged within the depot. Most early depots also contained a range of buildings in which oil tins and drums were repaired and repainted prior to being re-filled.

The Shell-Mex company had operated a rival network of depots across Scotland and the UK, but in 1932 an alliance was agreed that saw the formation of Scottish Oils & Shell Mex Ltd. as the joint marketing agency for both concerns. The Scottish Oil Agency Ltd was then wound-up

This section considers the distribution depots of the shale oil companies and subsequently the Scottish Oil Agency Ltd. We have no comprehensive record of all sites and many sites will be missing from our list.

A WAR OF RATES.

A Glasgow telegram says a war of rates is threatened between the Standard Oil Company of America and Scottish oil producers. The American company, which recently established oil depots in Scottish towns, has, it is stated, approached wholesale houses in Scotland with an offer to take over their retail merchant business. The Scottish companies have not yet decided upon any concerted action, but one the principal firms of producers has resolved to establish oil tank depots in Scotland and England, besides providing distributors with oil tank waggons and retailers with tanks in which to store Scottish oil.