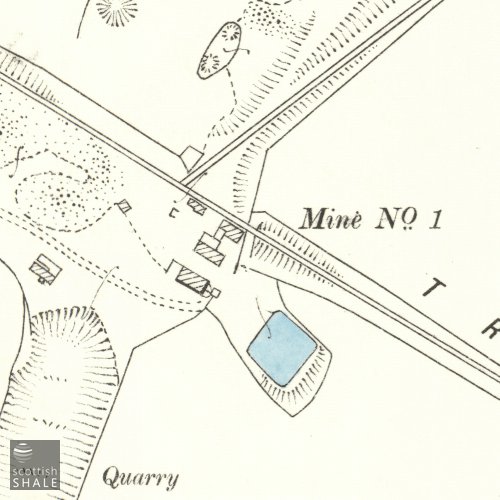 NOTE: There is some suggestion that "Mine No. 2" and "Mine No. 3" may have been incorrectly labelled on the 1897 O.S map, and that No. 2 should be labeled as No. 3 and visa versa. Until further evidence comes to light however, it is assumed that the labels on the OS map are correct.

The early history of the Deans mines remains unclear. Deans No. 1 exploited a number of areas of Dunnet Shale; these workings were eventually continuous with those of West Lothian Oil Company's Deans No.3 mine. Cross-cut mines also provided access to large areas of Pattison (Under Dunnet) Shale.

The Pumpherston Oil Company purchased the local mineral rights several years after the failure of the West Lothian Oil Company c.1891, and appear to have re-opened No. 1 Mine. No. 1 and No. 3 Mines were linked underground and by a surface tramway. Shale was quarried in the area between No. 1 and No. 3 Mines, and workings to the Pattison Shale and the Stanley Shale seem to have led off that quarried area.

Mapped by the Ordnance Survey of c.1895, showing No. 1 Mine in operation. 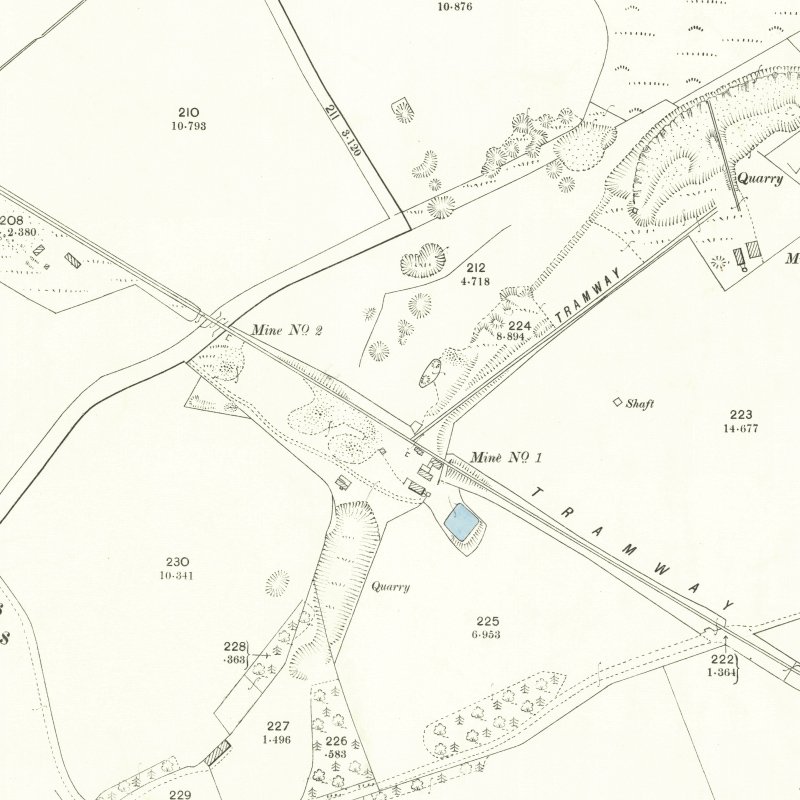 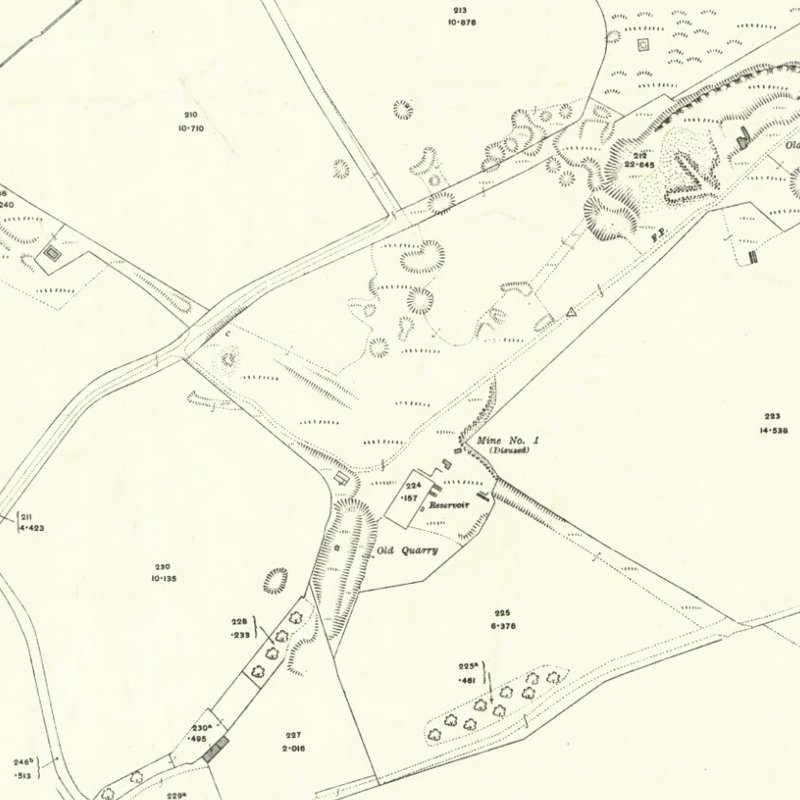 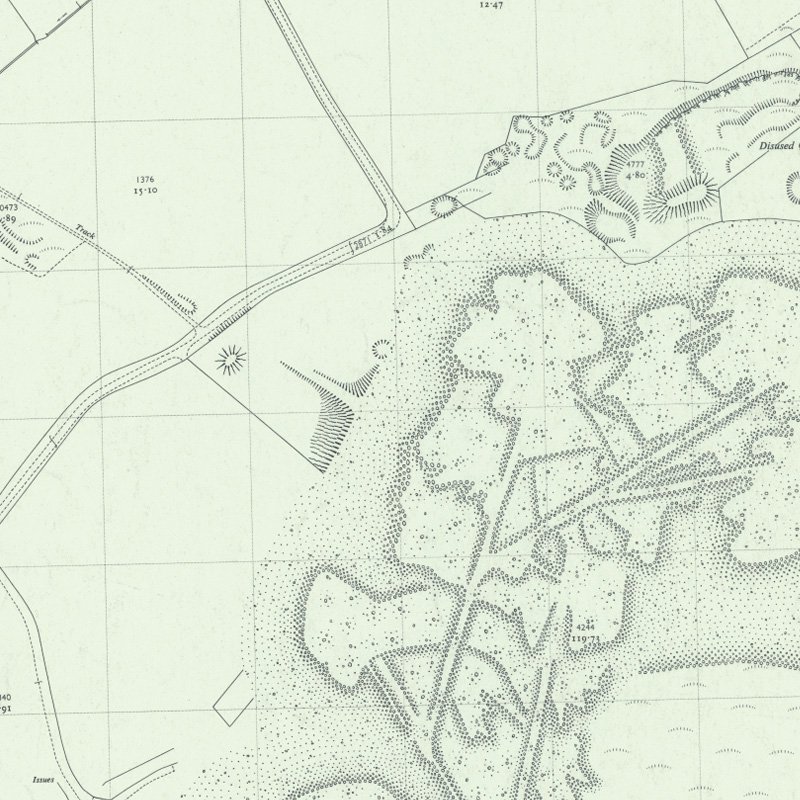 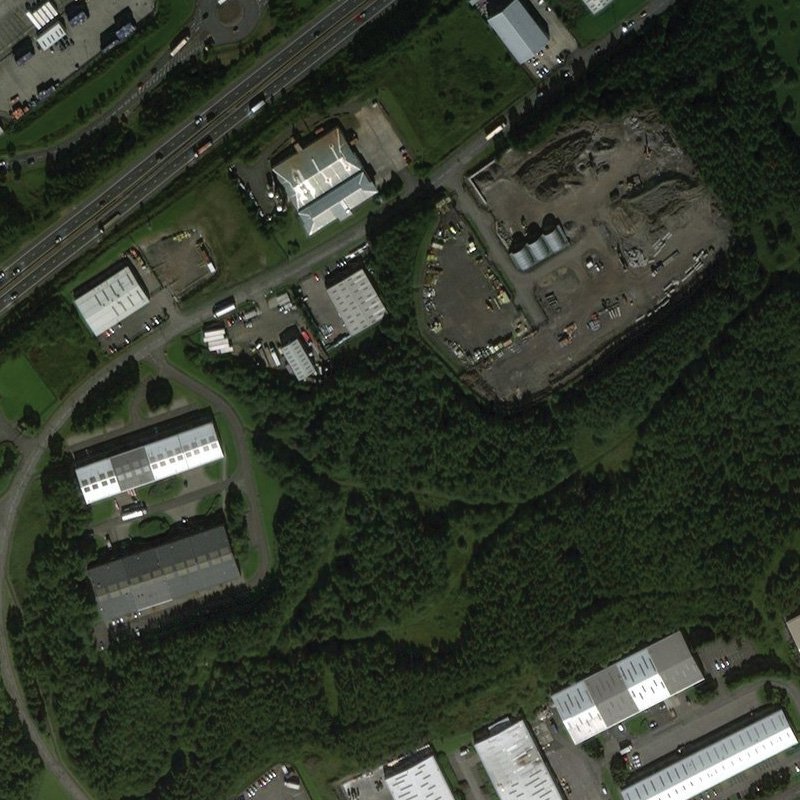 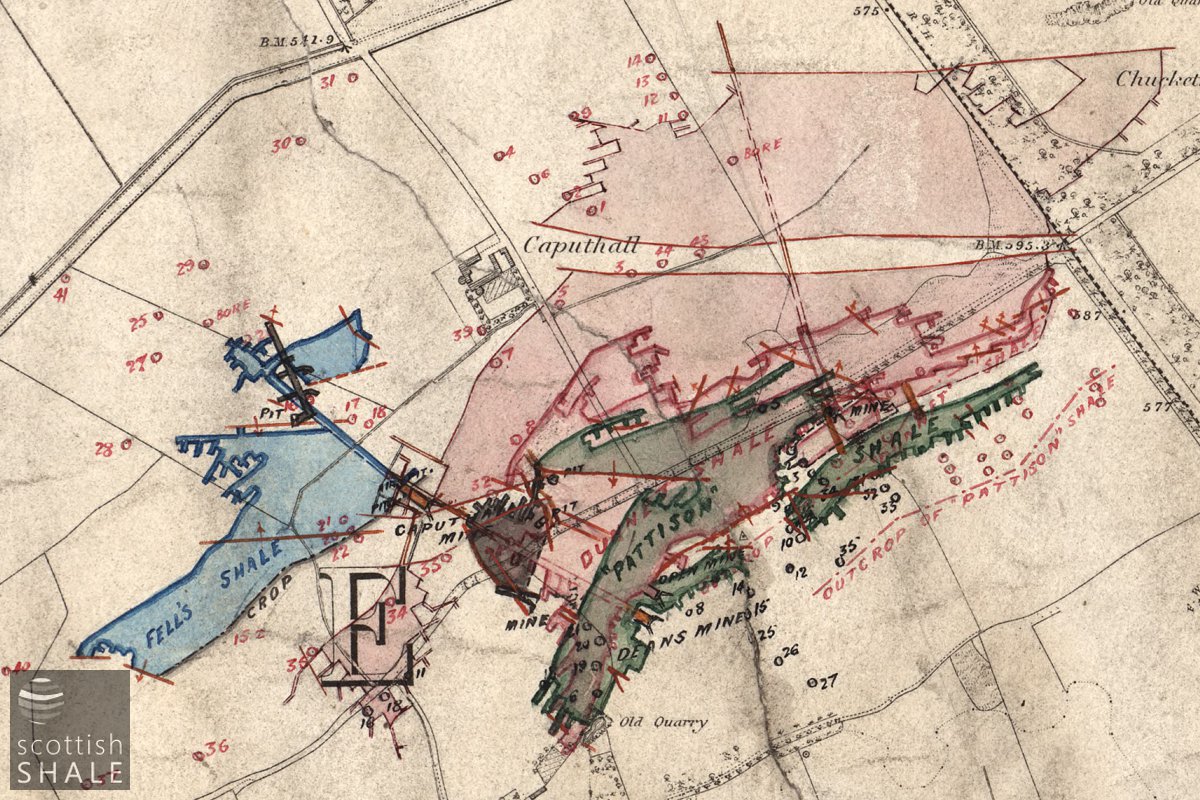 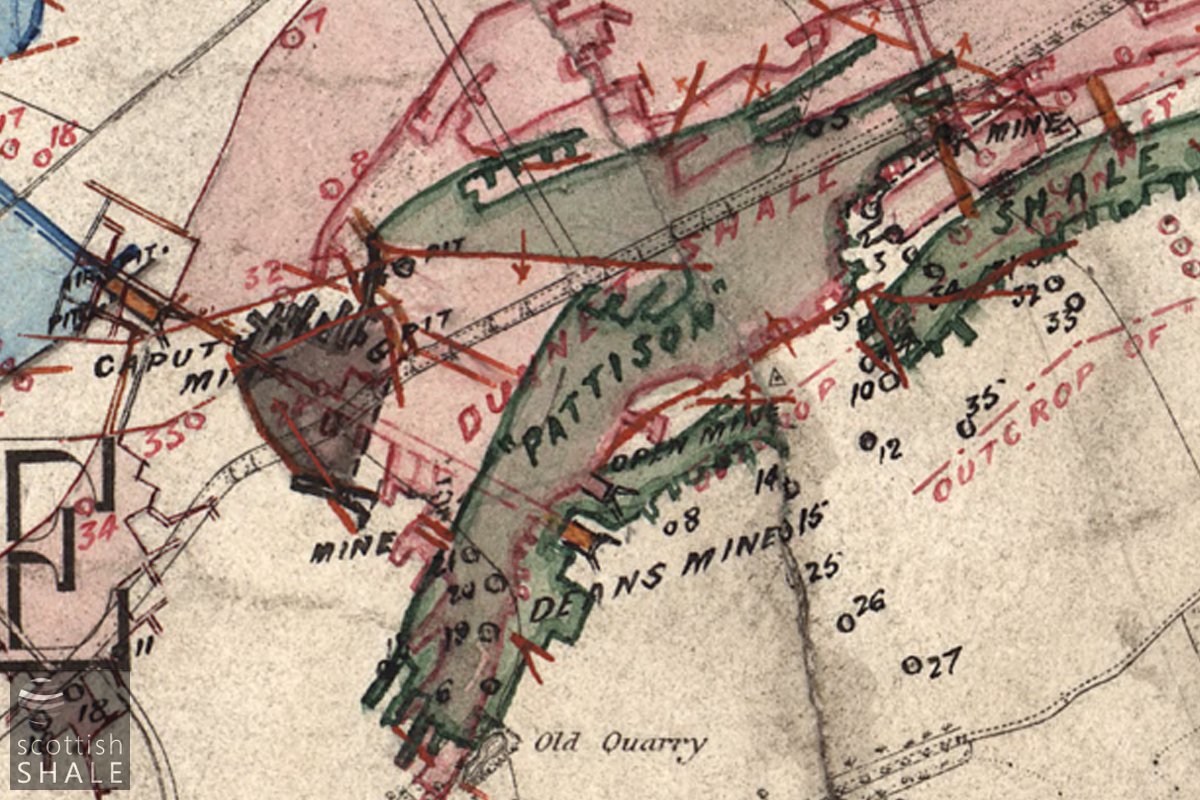 Close-up of (1) showing various mine entrances in the vicinity of Deans No. 1 mine. 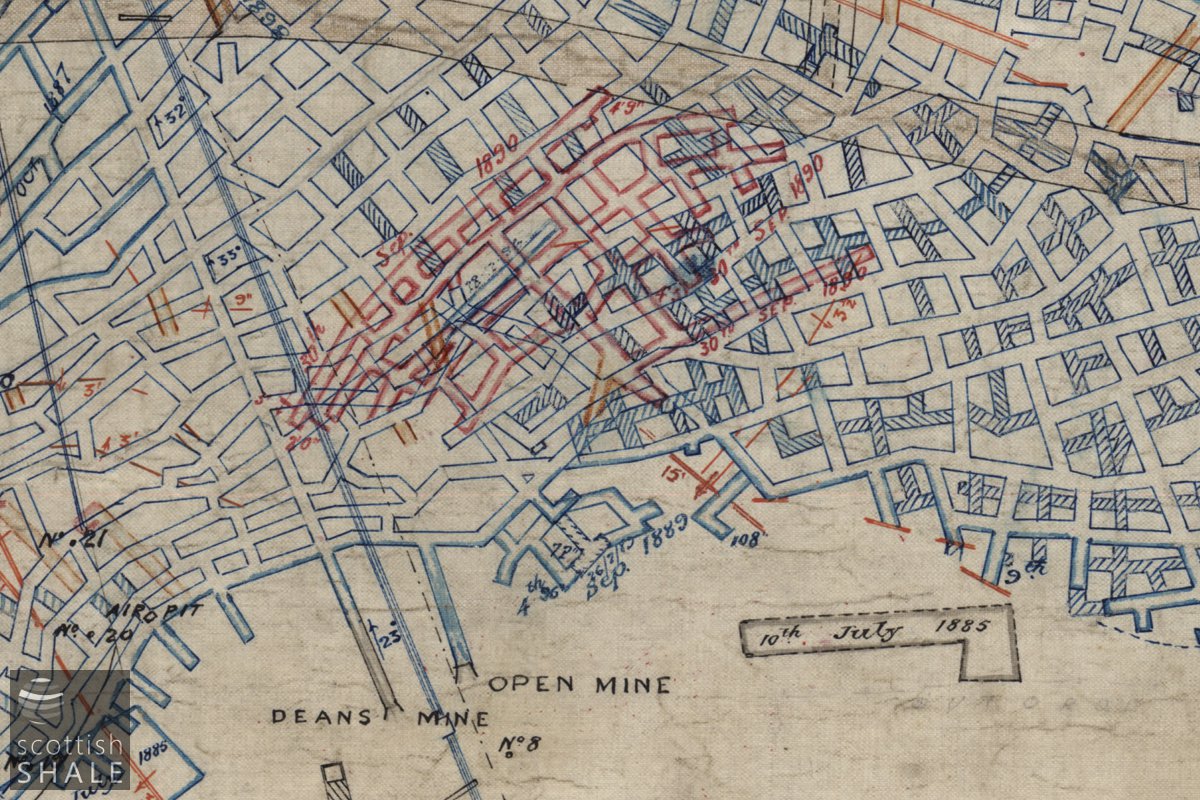 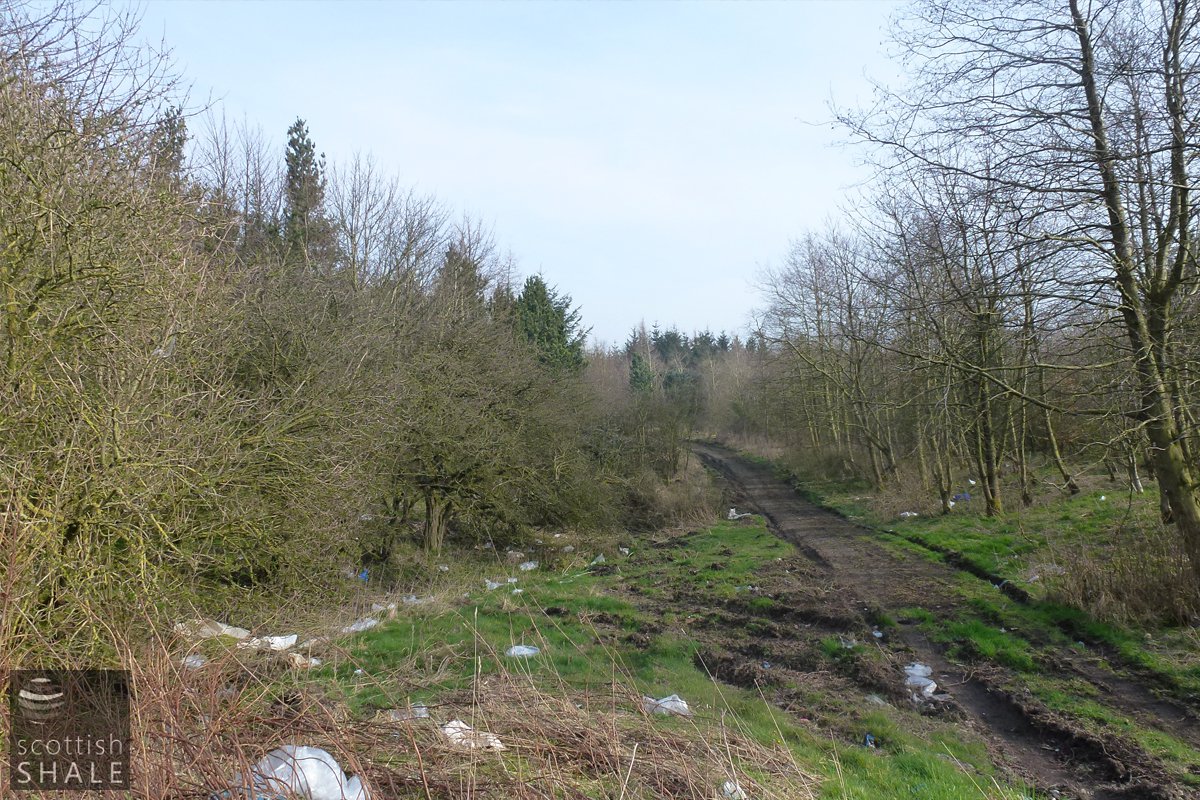 The immediate foreground marks the approximate site of No. 1 mine. Looking east. March 2012. 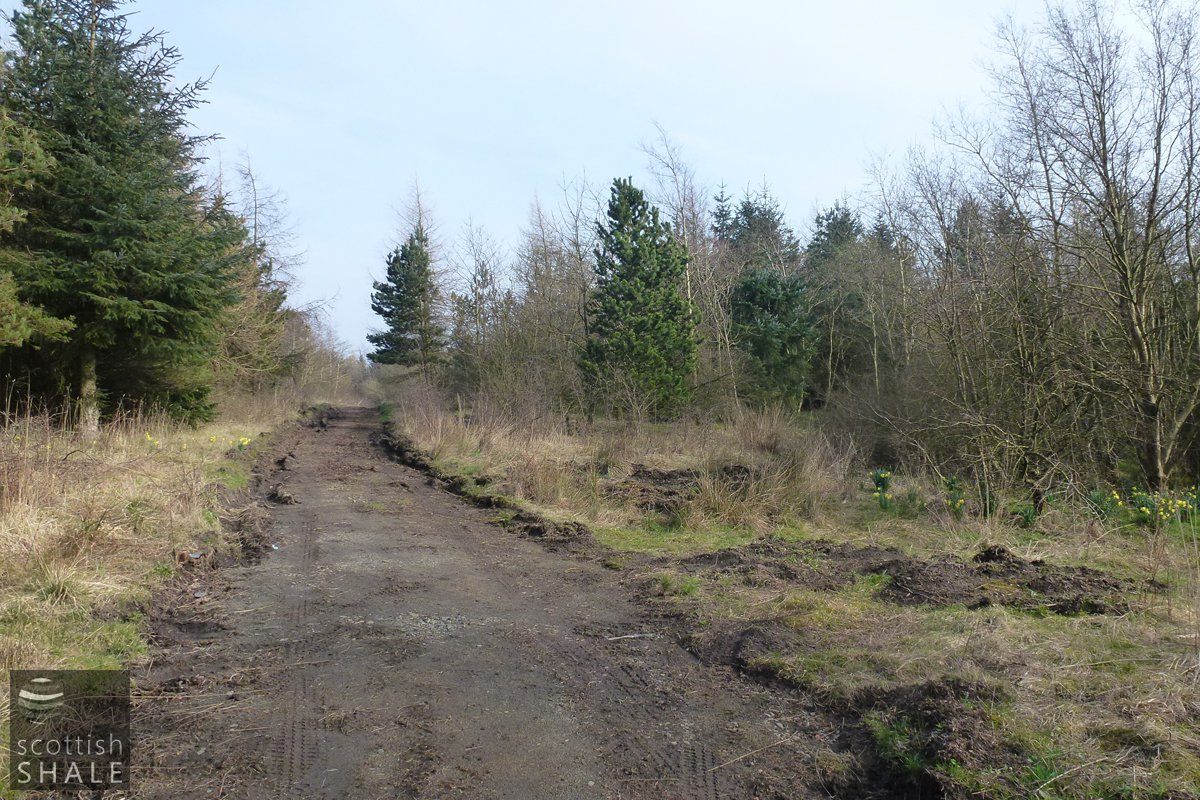 View towards the site of No. 1, from the site labelled "No. 2" on the 1896 map. The path and the overgrown hedgerow (left) mark the approximate route of the tramway, and are some the few features surviving the substantial landscaping of the area. Looking south east. March 2012.

Many… had pointed out to them with satisfaction,the open quarry, where they had, so to speak, a bing of shale that would keep them going for years. Had they wrought that quarry alone, which they could easily have done at that time, they would have saved in the meantime a large amount of capital expenditure, but this would not have been fair for the future of the company. What they had been anxious about, and what they had done had to be to develop the two mines that they had opened out to the Dunnet and Fells seams.

...a fresh seam of shale (the "Barrack") has been successfully opened into, greatly superior to any shale hitherto obtained on the property, yielding, per ton, much more oil, which is finer in quality, richer in scale, and produces greatly more sulphate of ammonia, which this special and unusual advantage, that it is brought to the surface by one of the existing mines. Further, an outcrop of "Dunnet" shale, of great thickness and excellent quality, in still better condition in the mine, has been opened up, which is capable of yielding a large supply by open cast or quarrying, at a much lower rate of cost than anything hitherto known.

Their mines were in good order, and they were opening up a new mine which would help to keep their shale at a moderate cost. The new mine was in the side of the quarry, and was a specially valuable part of the present properties, and thus lessening the cost of drawing; and it likewise opened up a great field of shale about 18 feet in thickness. The extra cost of this new mine would be small.

Coal Authority Mine Abandonment Catalogue No. 4940, showing workings in the Stanley, Dunnet and Pattison Shales from Deans No. 1, No. 2, Caputhall, abandoned in 1906.