Dunnet or Sandholes mine 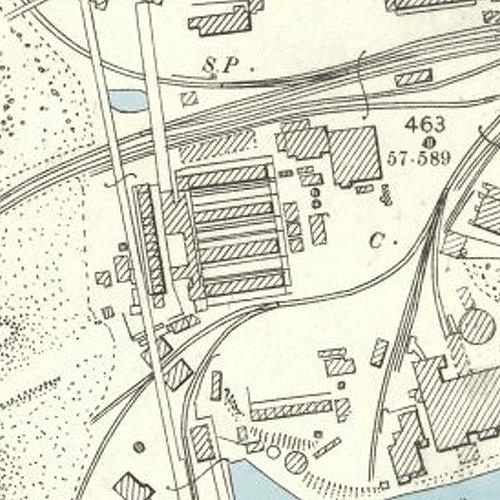 A pair of steeply inclined adits driven from a site in the heart of Broxburn Oil Works, tunnelling beneath existing buildings and, as a cross-cut mine, cutting through barren ground to access seams of Dunnet Shale lying to the south, beneath the town of Broxburn. c.1925, the workings were linked to those of Newliston No. 29 Mine, and may also have linked to those of Pyothall No. 5 Pit.

Mapped by the Ordnance Survey of c.1895, showing retorts on site prior to development of Dunnet Mines. 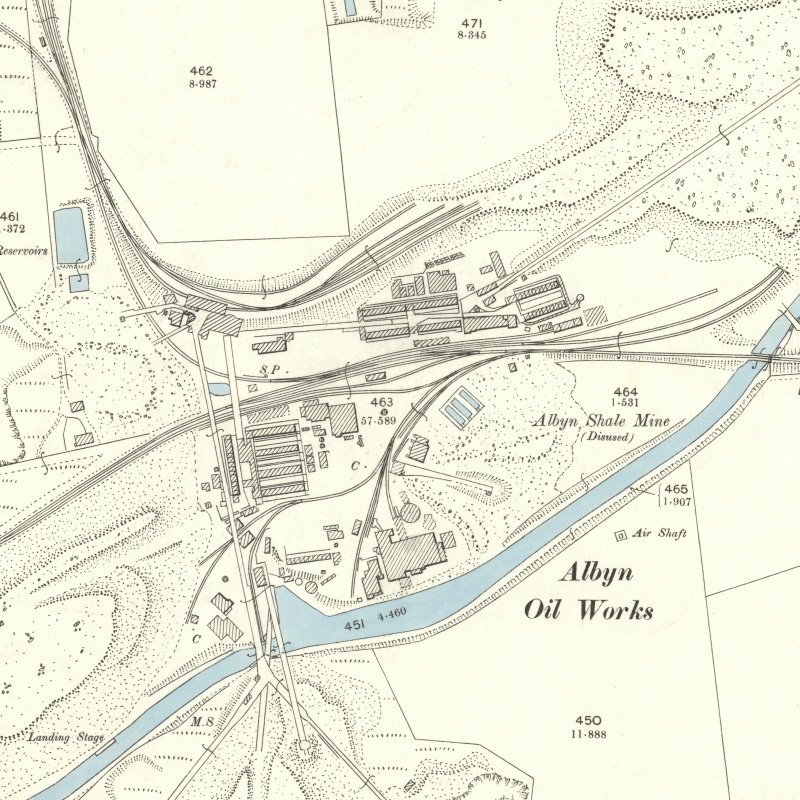 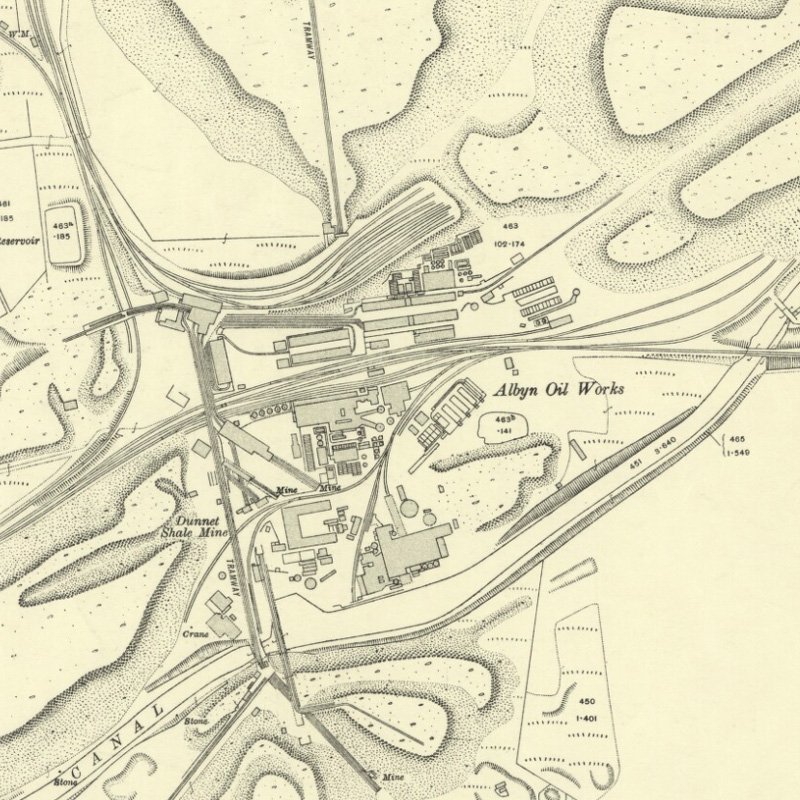 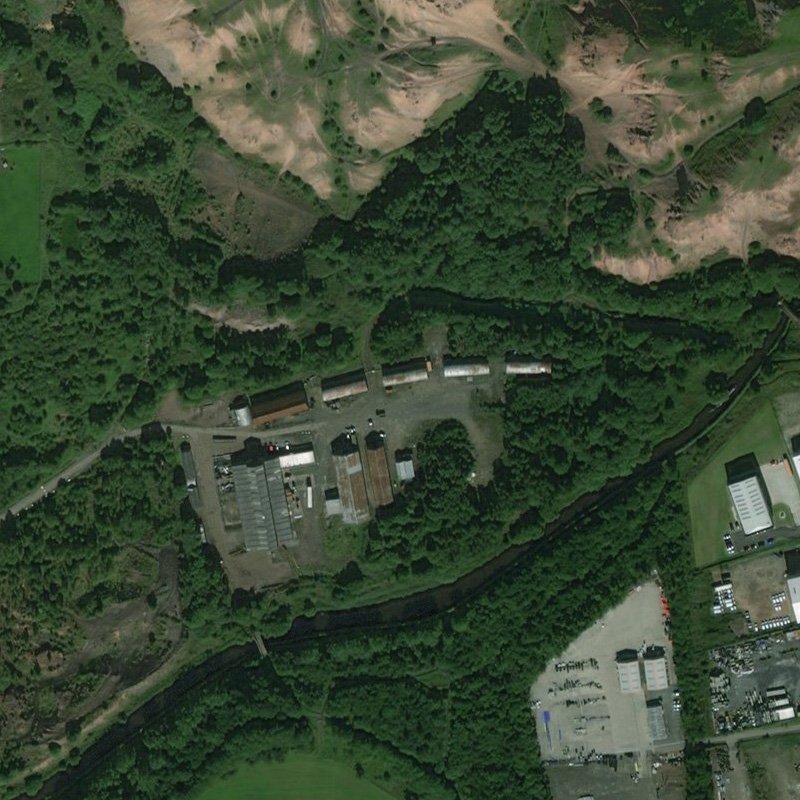 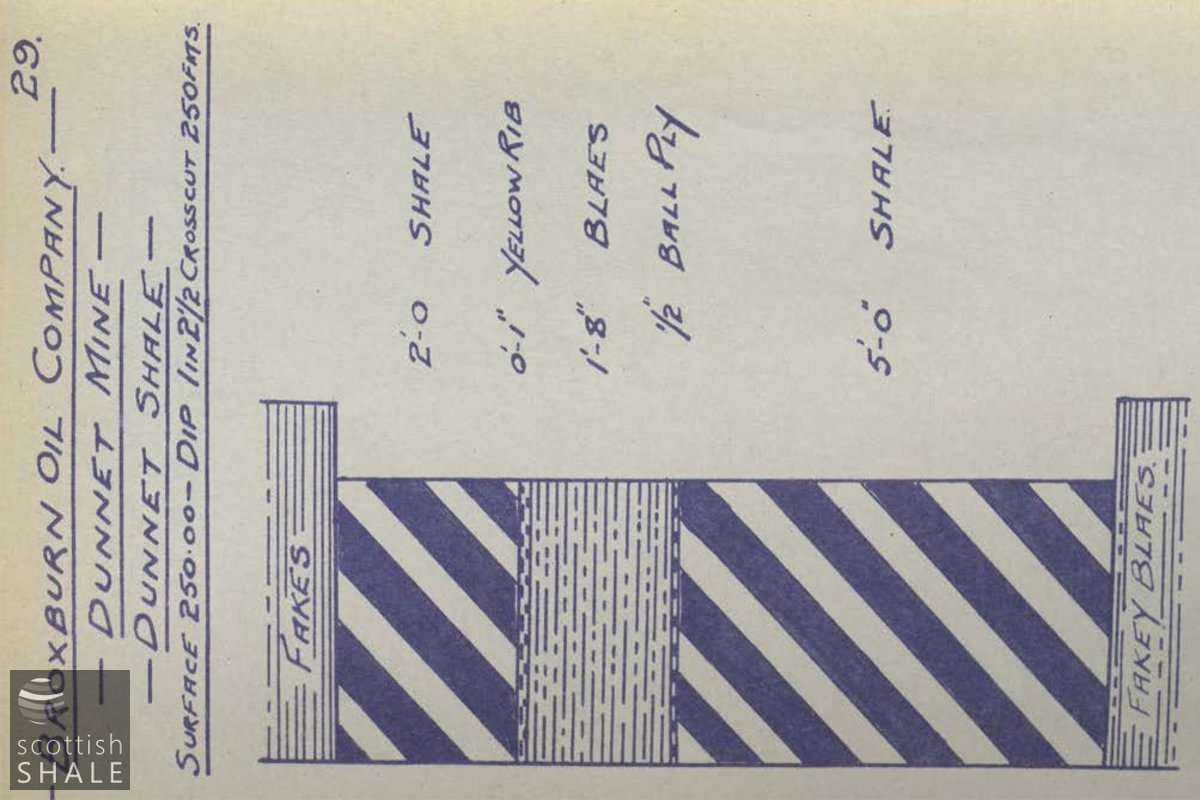 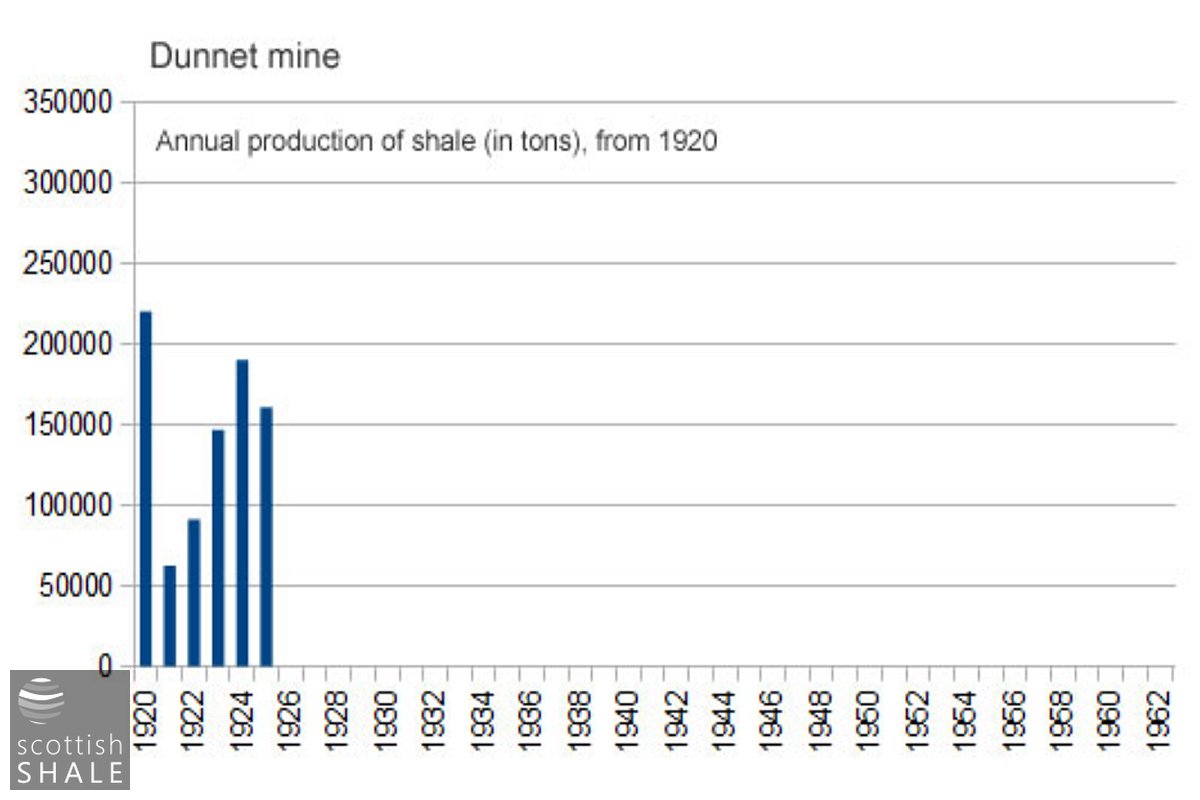 1950's industrial buildings on the site of Broxburn Oil Works. Dunnet mines surfaced on a site between second and third building from left. Looking west. April 2012.

Mr William Clark in this paper pointed out at the outset that the mines to the Dunnet shale seam, which are situated about a quarter of a mile north-east of Broxburn village, are only about 160 yards distance from the company's breakers and retorts. The motive power chiefly employed is electricity, obtained from a central power station alongside the work's boilers and within a few yards of the retorts, in which all the exhaust steam from the engines is utilized.

Careful attention is being paid to the quality of the shale, the poor places being abandoned and the height of the workings restricted in others so as to obtain best results (September 1924). A fairly heavy fall has been encountered in the old level of the Newliston mine which is being opened up from the Dunnet Mine, but the work on the companion level has been carried forward a distance of 17.5 fathoms (January 1925). Some trouble is occurring through the crushing of the strata where stooping is in progress, but it is expected that this will diminish as the stooping area extends. As the old levels of the Newliston mine were badly fallen, the two levels from the Dunnet mine are being carried forward through the stoops and are making fairly good progress (February 1925). The crush has been less troublesome and good progress has been made with the level which is re-opening the old workings in Newliston mine (April 1925).

Broxburn Oil Company (Ltd.) posted the following notice at their works and mines yesterday afternoon:– "The Broxburn Oil Company (Ltd.) regret to intimidate that the Dunnet mine, Albyn crude oil works, and Broxburn refinery will not be reopened, and notice is hereby given that all contracts of service with the Company at these places will terminate on Saturday, 14th May 1927. The employment of any workers who may be engaged in dismantling or otherwise will be from day-to-day only." Previous to the four weeks' strike, which took place at the end of 1925 to resist a reduction of 10 per cent. in rates and wages–about 1200 men were employed at the above works and mine. Since the strike the works and mine have remained closed, only care and maintenance men being employed. A small proportion of the unemployed have succeeded in getting work elsewhere or have emigrated, but a very large number of men would receive the above intimation with feelings of dismay. Many are elderly men who have spent all their working days in the employment of Broxburn Oil Company and are now looked upon as quite unfit for other work. Another unfortunate result of this abandonment will be the effect it will have upon the public rates of the parish of Uphall. The oil companies pay 50 per cent. of the total amount collected by the Parish Council, and the demolition of Broxburn works and the abandonment of Dunnet mine will mean a very large reduction in the valuation of the parish, with consequent increased burdens upon those ratepayers remaining. The debt upon the Parish Council on account of payments to able-bodied unemployed already runs into a very large sum of money.

Coal Authority Mine Abandonment Catalogue No. 9067, showing workings in the Dunnet Shales from Dunnet Mine, abandoned in 1927.