Oakbank Pit, sometimes known as Midcalder Pit, supplied most of the shale used by Oakbank Paraffin Oil Works during the 19th century. The two adjacent shafts (No. 1 and No. 2) accessed both the Dunnet Shale and the Broxburn Shale (locally known as the Big Shale). 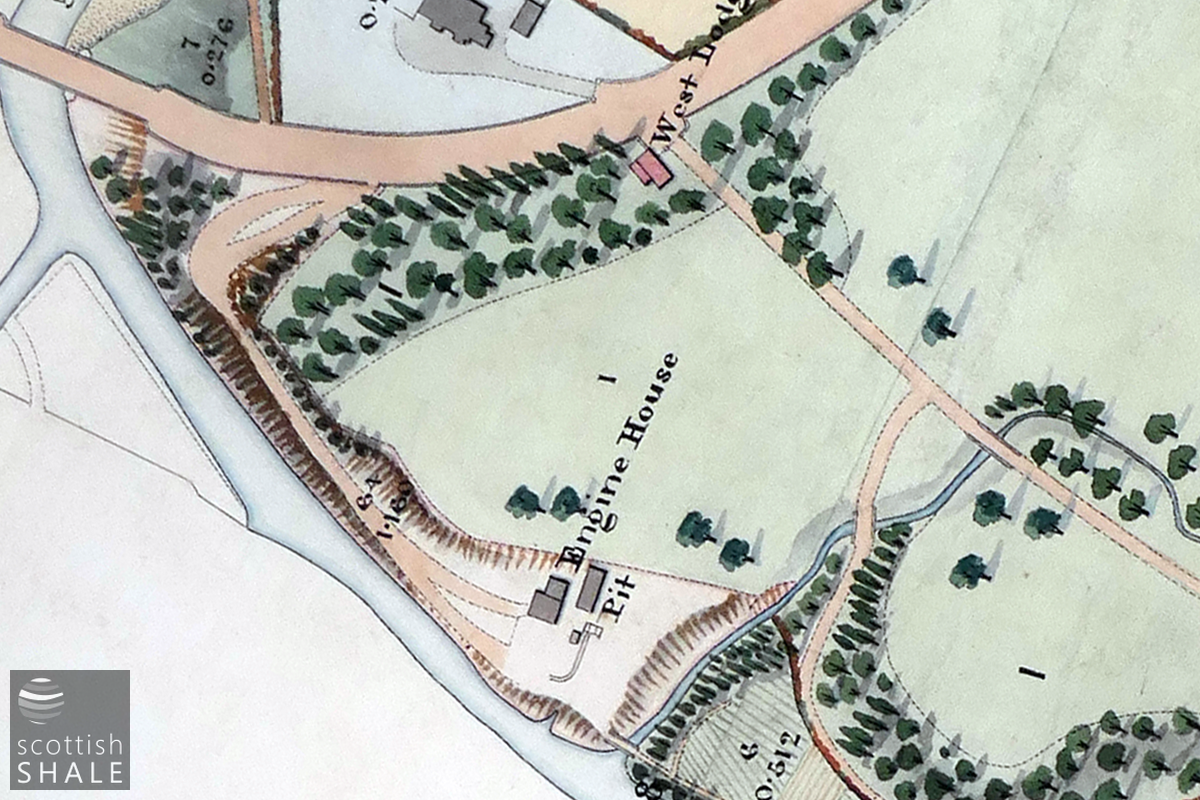 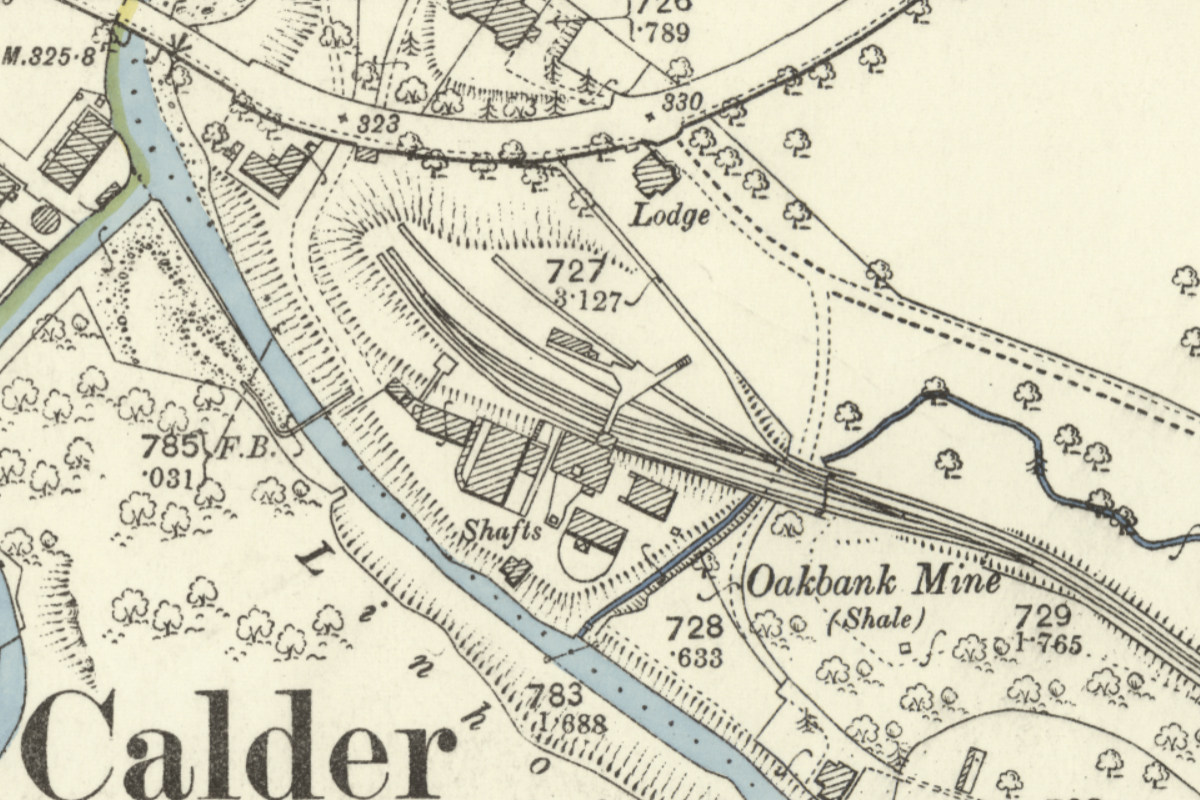 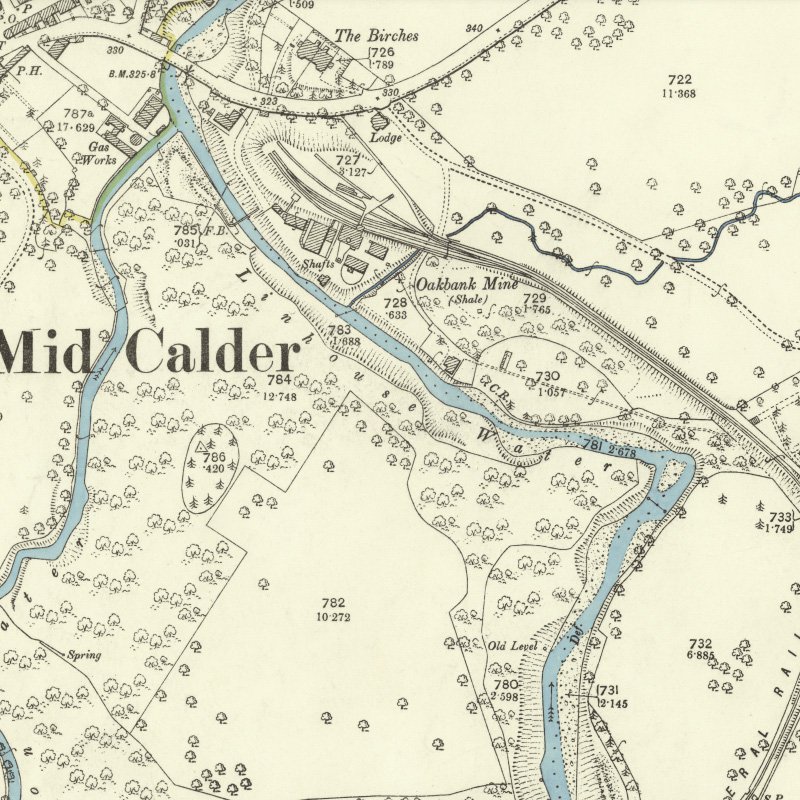 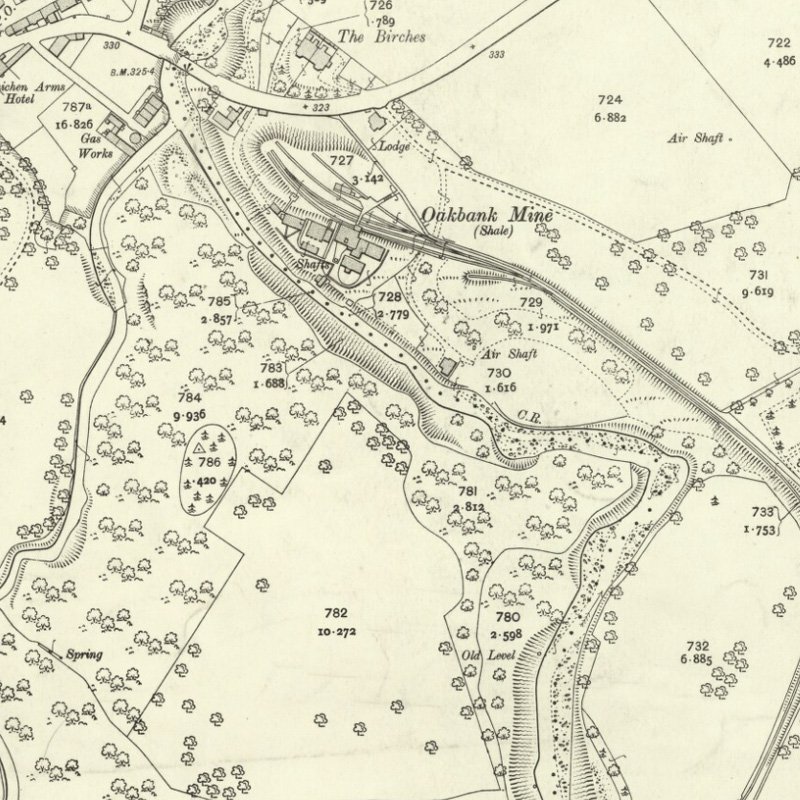 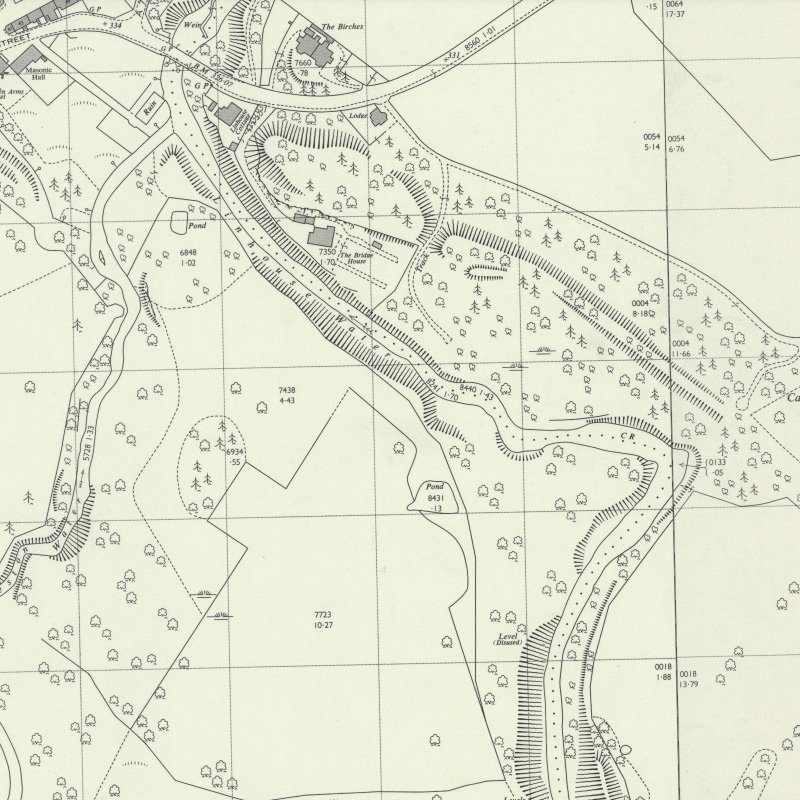 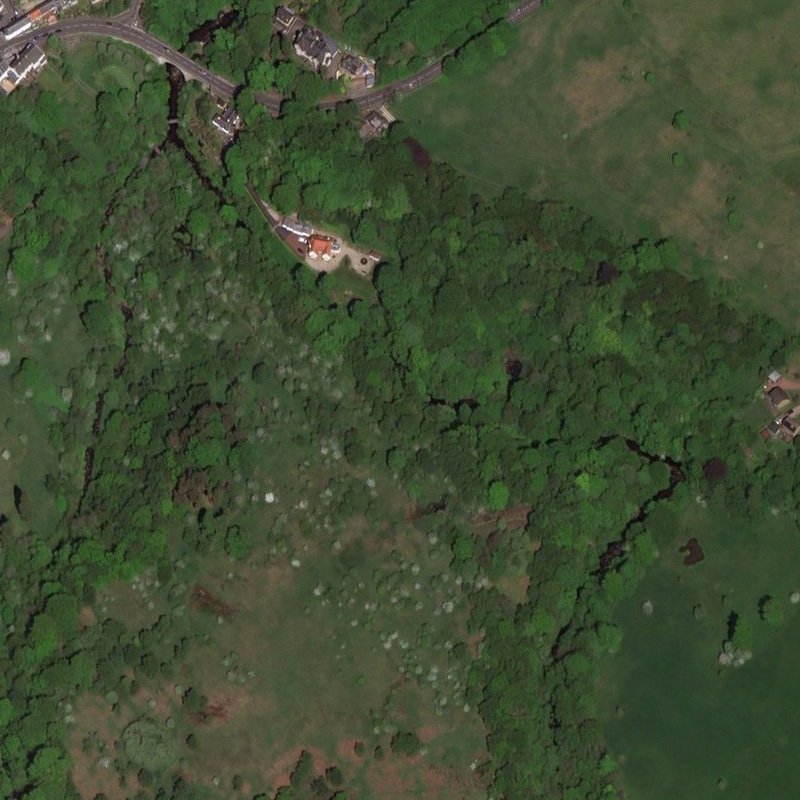 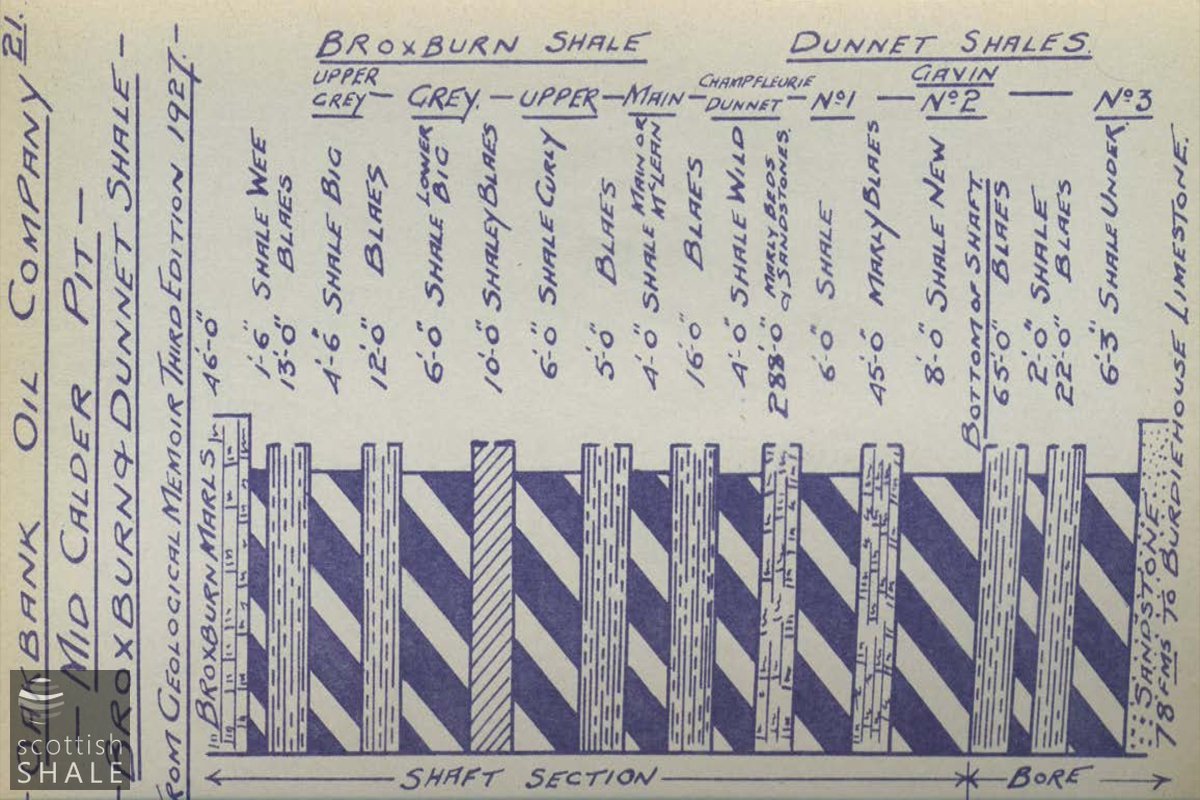 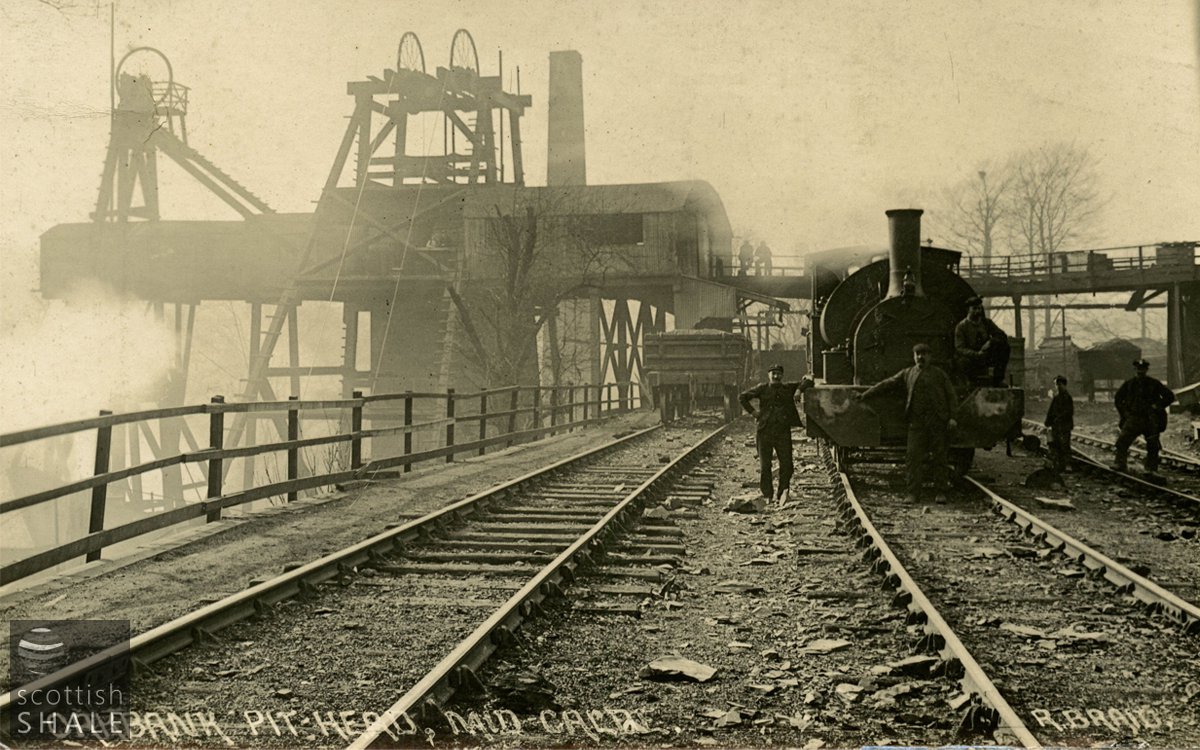 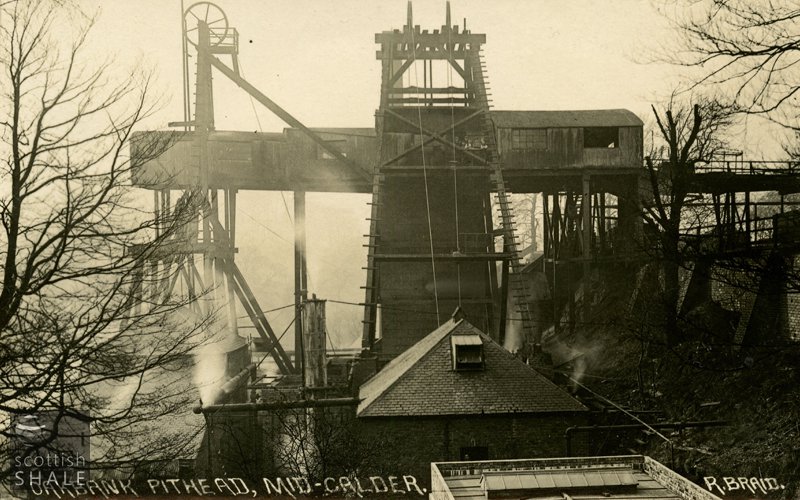 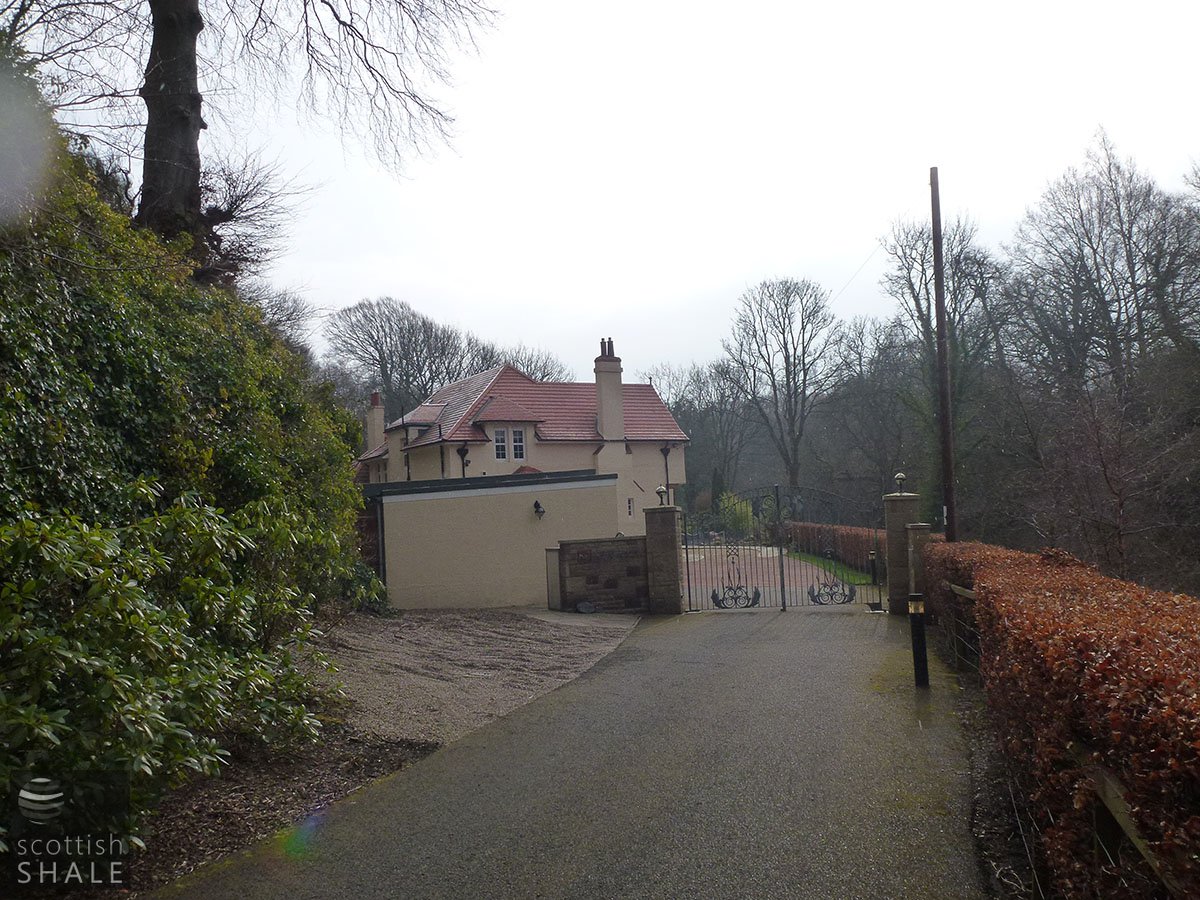 Bridge House, constructed on the site of the mine with Linhouse water flowing beyond the hedge to the right. Looking south east. March 2012. 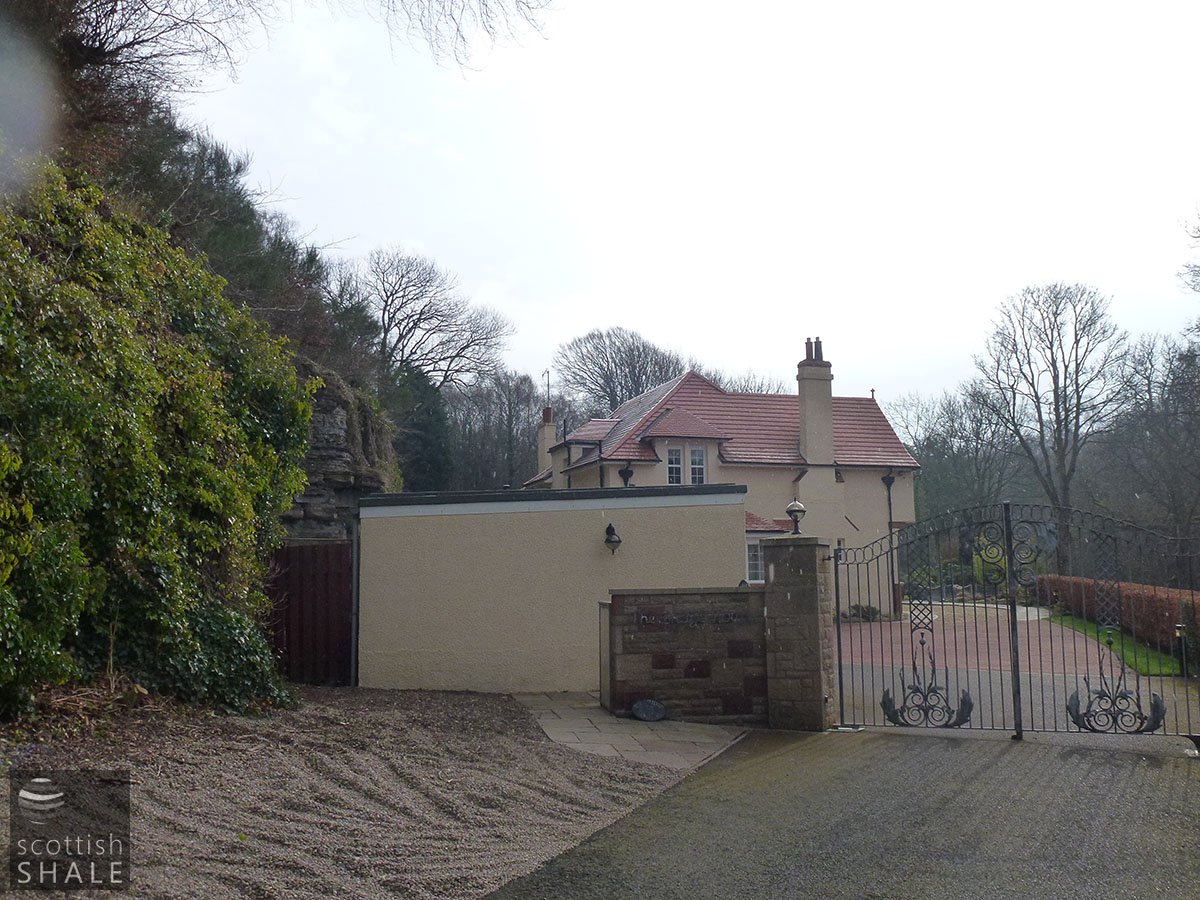 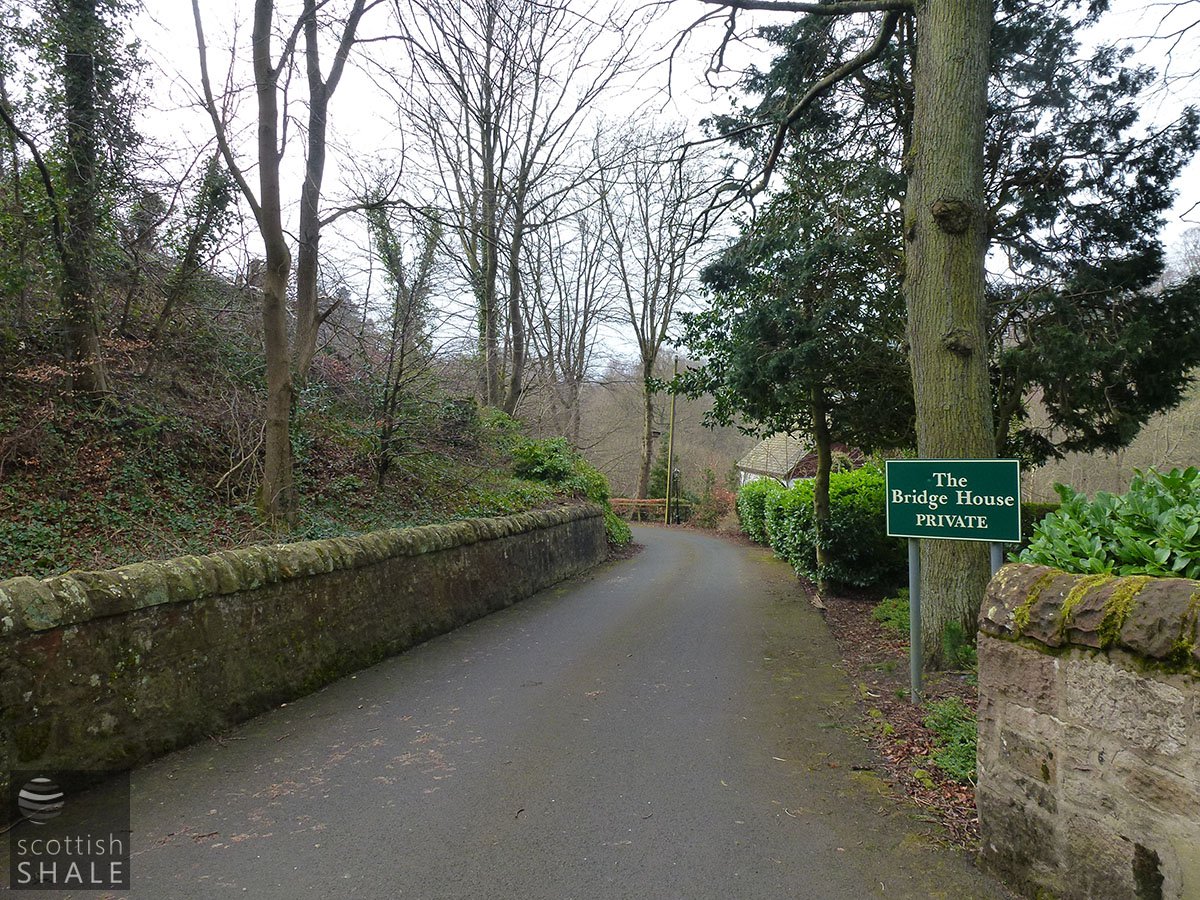 On Saturday this Society had their fifth excursion for the summer season, to Linhouse burn and the district around Mid-Calder. Mr Thomas Smyth was the conductor. The Society took the train to Kirknewton Station, and first visited East Camps Quarry, about two miles east of the village of Mid-Calder. The excursionists next walked to Mid-Calder and examined the operations at a shale-pit which has recently been sunk, a short distance above the bridge, by the Mid-Calder Mineral Oil Company. The Society then visited Oakbank Works.

One of the most extensive of the shale pits belonging to the company is on the banks of a tributary of the Almond, near the village of Mid-Calder. It is forty -three fathoms in depth. and when it was deemed advisable a few months age of work the lowest seam of shale, which is four and a half feet thick, it was found necessary to erect new pumping machinery to keep the workings dry. This machinery, which is as efficient in operation as novel in construction, was made by Messrs. A. Barclay & Son, engineers, Kilmarnock. The engine, which is of the overhanging-beam class, high pressure and condensing, has a steam cylinder 62 inches in diameter, with a stroke of 8 feet, which gives a stoke of 10 feet at the pumps......The engine having been christened "Maggie" by a young lady breaking a bottle of champagne over the beam, steam was put on, and the engine from the start worked with beautiful smoothness, and to the satisfaction of every one present.

A number gentlemen from Edinburgh and Glasgow, who are interested in mining, paid a visit on Thursday to the works of the Oakbank Oil Company, near Mid-Calder, for the purpose of inspecting some new pumping machinery lately erected there.

The Oakbank Oil Company have worked the Calder shale field for seven years, and the works for distillation of oil, &c., cover an area of 26 acres. 60,000 tons of shale are distilled per, annum, and two million gallons crude oil are refined and manufactured into burning and lubricating oils, naptha, and paraffin wax, from which candles are made; while a valuable product from the shale, sulphate of ammonia is also extensively manufactured.

One of the most extensive of the shale pits belonging to the company is on the banks of tributary to the Almond, near the village of Mid-Calder. it forty-three fathoms in depth, and when it was deemed advisable a few months ago to work the lowest seam of shale, which is four and a half feet thick, it was found necessary to erect new pumping machinery in order to keep the workings dry. This machinery, which is efficient in operation as novel in construction, was made by Messrs A. Barclay & Son, engineers, Kilmarnock. The engine, which is the overhanging beam class, high pressure and condensing, has a steam cylinder 62 inches in diameter, with a stroke 8 feet, which gives a stroke 10 feet in the pumps.

The beam is made of solid wrought iron plates, 30 feet long, made of two plates 1¼ inch thick thoroughly bound together. The pump rods are hung between these plates at the pit end, and the steam cylinder is just within these rods, the back end of the beam being supported by a vibrating column. By this arrangement the pithead is kept perfectly accessible, and unencumbered by machinery, point of the greatest moment. engine is fitted with the most improved system valve gear, working two Corinth valves in the one steam chest, with the equilibrium valve between. The condenser is of blow-through type, so successfully applied by Mr Barclay to the largest pumping engines. This form of condenser has no working parts to go wrong or keep in repair, and at all times gives a steady vacuum in the cylinder. The pump which the engine works is of the plunger class, the plunger being 27 inches in diameter, working a 10 feet stroke, and weighing 8½ tons. The rods to which the plunger is attached are made of pitch pine 14 inches square, in lengths of 40 feet, bolted together at each joint by four malleable iron plates 20 feet long. The column of pipes from pit bottom to the surface are 22 inches in diameter.

All the pipes, clack pieces, and working barrel were tested in Messrs Barclay's works to a pressure of 450lb to the square inch before being sent out. The heavy weights that had to be lowered down the pit necessitated the use of a very powerful crane. This was also made by Messrs Barclay & Son, and is fixed permanently on a stone seat, to be made use of as occasion requires in the pit.

This crane is capable of lifting 20 tons as a working load, but has been tested much above that strength. It is driven by a single 8 inch cylinder, working with screw and worm wheel on the first motion, and reduced with spar gearing to the drum. The drum is six feet diameter, supported on three strong cast iron rings and covered with wood cleading. The rope has been tested severely in lowering the heavy weights down the pit, and has worked very satisfactorily. The total weight of the material in connection with the pumps in the pit is about 150 tons, and of the engines above ground 70 tons. The great power of the engine and pumps may be imagined from the fact that 1500 gallons of water can be discharged per minute from the pit into the adjoining stream. Besides the gentlemen already named, there was a considerable assemblage round the pit-head on Thursday afternoon, when the new machinery was set agoing for the first time.

The engine having been christened "Maggie" by a young lady breaking a bottle of champagne over the beam, steam was put on, and the engine from the start worked with beautiful smoothness and to the satisfaction of everyone present. On the call of Mr Kennedy, general manager of the works, three cheers were given for the success of "Maggie".

A RAILWAY THROUGH A TENNIS COURT - ACTION FOR INTERDICT

Lord Shand, in the Bill Chamber of the Court of Session yesterday, heard counsel in connection with an application for interdict presented by Peter M'Lagan of Pumpherston, M.P., against Colonel Hare of Calderwood and the Oakbank Oil Company. Mr M'Lagan sought to have the company interdicted from forming a railway through the grounds of Calderhall. It was stated that in September, 1884, Colonel Hare let to Mr M'Lagan the mansion house of Calderhall, with the pleasure grounds and policies, for seven years. In the following year Colonel Hare intimated that he proposed to grant permission to the Oakbank Oil Company to form a railway from the pits to their works. This railway, it was maintained, would interfere with the amenity of Calderhall as a residence. The company, on the allegation that Mr M'Lagan had given his consent, proceeded on Saturday last to stake off a line of railway which cut through the shrubberies and intersected the tennis court. It was contended on behalf of the oil company that Mr M'Lagan had agreed to the proposed line of railway being formed. Lord Shand granted interim interdict, and ordered answers to be lodged within eight days.

The Oakbank Oil Company today closed down the shale workings, which have supplied the works at Mid-Calder since their inception. The workings are unique in that they have yielded several hundred tons of shale per day for a generation. Lord Tophichen's daugher, the Hon. Miss Sandilands, cut the first sod of the new shale field acquired on the Calder House estate at Mid-Calder.