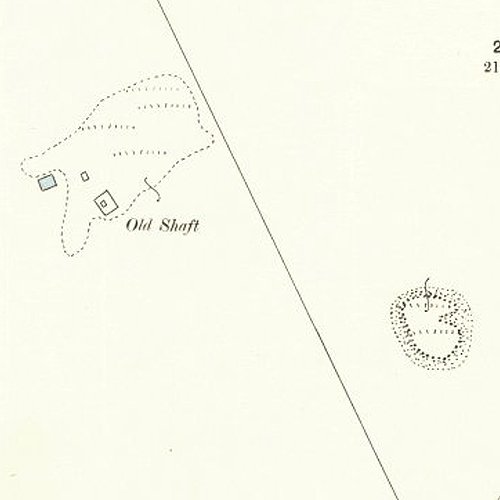 The identity of these sites remain subject to confirmation.

Coal and shale appear to have been worked on the neighbouring estates of Drumcross and Drumcrosshall. An annotated estate plan in the museum collection (LVSAV1991.056) shows that the road from Caputhall to Drumcross formed the boundary between the two estates.

On the eastern side of the road, in the estate of DRUMCROSSHALL, the same map shows a further "old shaft" with associated surface features, plus two other areas of disturbed ground. The "old shaft" (55.910335, -3.585828) is shown on Geological Survey plan LSP 562 to be an adit to workings in the Houston Coal. A slight platform of raised ground survives at this point within a ploughed field. Plan LSP 562 also shows an adit associated with the easternmost area of disturbed ground (55.910593, -3.582052), noted as accessing the Fells Shale although not showing the extent of working. A low elongated mound remains close to this point, covered in more luxuriant grass than the waterlogged ground around it. This mound is marked "shale" on the annotated estate plan LVSAV1991.056. The central area of disturbed ground, (55.909466, -3.584102) has now been levelled and little trace remains other than a possible discolouration of the soil. No mines are associated with this feature which is labelled on the estate plan as "spent shale" - suggesting waste shale from the retorting process rather than mining waste. This would point to this area being the site of Drumcross Paraffin Oil Works. No other evidence is known to survive of the location of the Drumcross Paraffin Oil Works of Lester, Wyllie & Company, or a subsidiary works owned by Page & Palmer which operated between c.1866 and c.1868.

The public roup following the bankruptcy of both partnerships (see snippet below, dated 14/02/1868) included the plant of Drumcross Oil Works (presumably sited in the Drumcrosshall estate) and the mineral rights of DRUMCROSSHALL. This seems at odds with an earlier advertisement placed by the oil works proprietors (see snippet below, dated 09/02/1867) seeking miners to development two mines at DRUMCROSS. On the balance of evidence, it is assumed that the two workings in the Drumcrosshall estate are the Drumcrosshall No. 1 and No. 2 Mines , but otherwise as described in the advertisement.

It seems likely that the two shafts to the west of the Caputhall to Drumcross road, that lie within the Drumcross Estate, are related to the later coal mining operations of the Drumcross Coal Company which was liquidated c.1875.

Mapped by the Ordnance Survey of c.1895, showing mine site, thought to be Drumcross No. 1, plus associated workings. 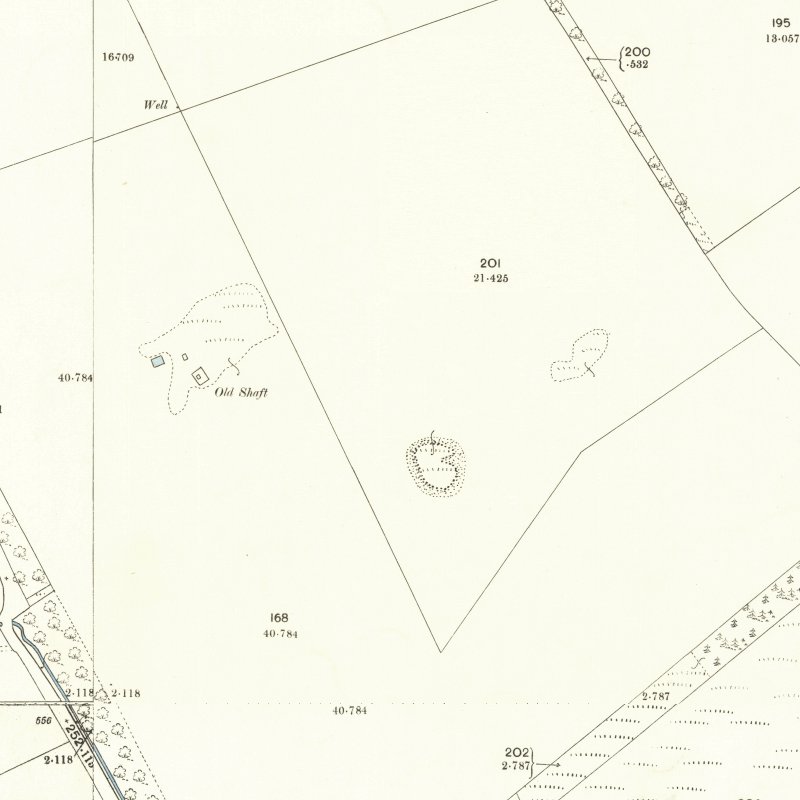 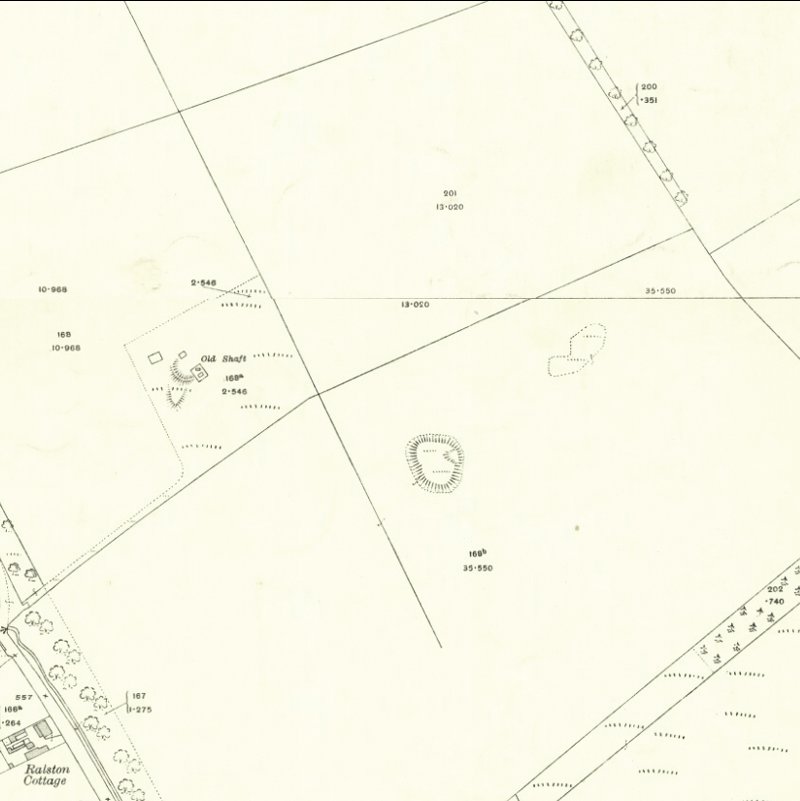 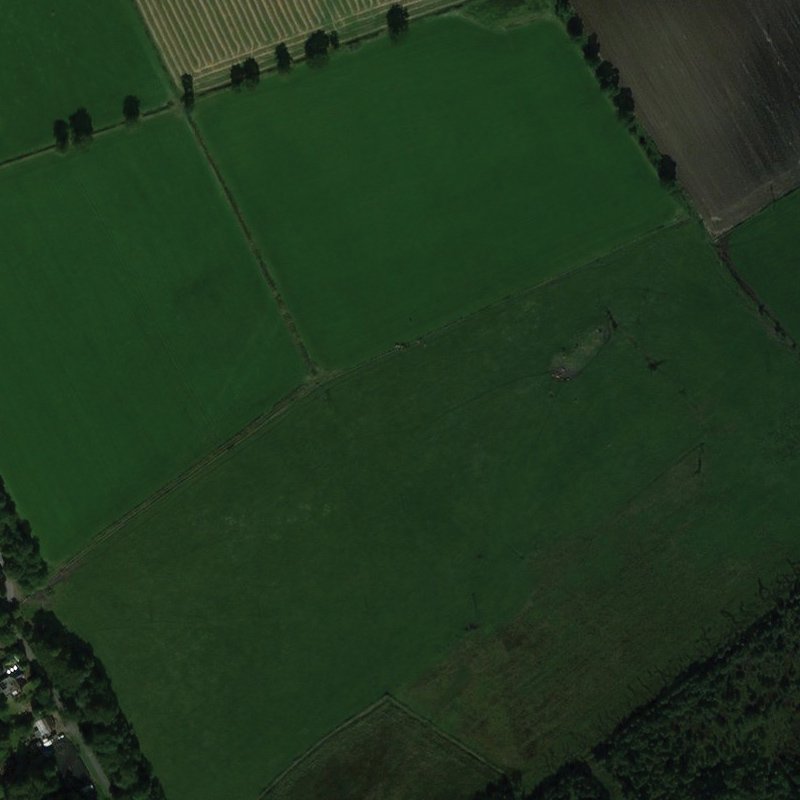 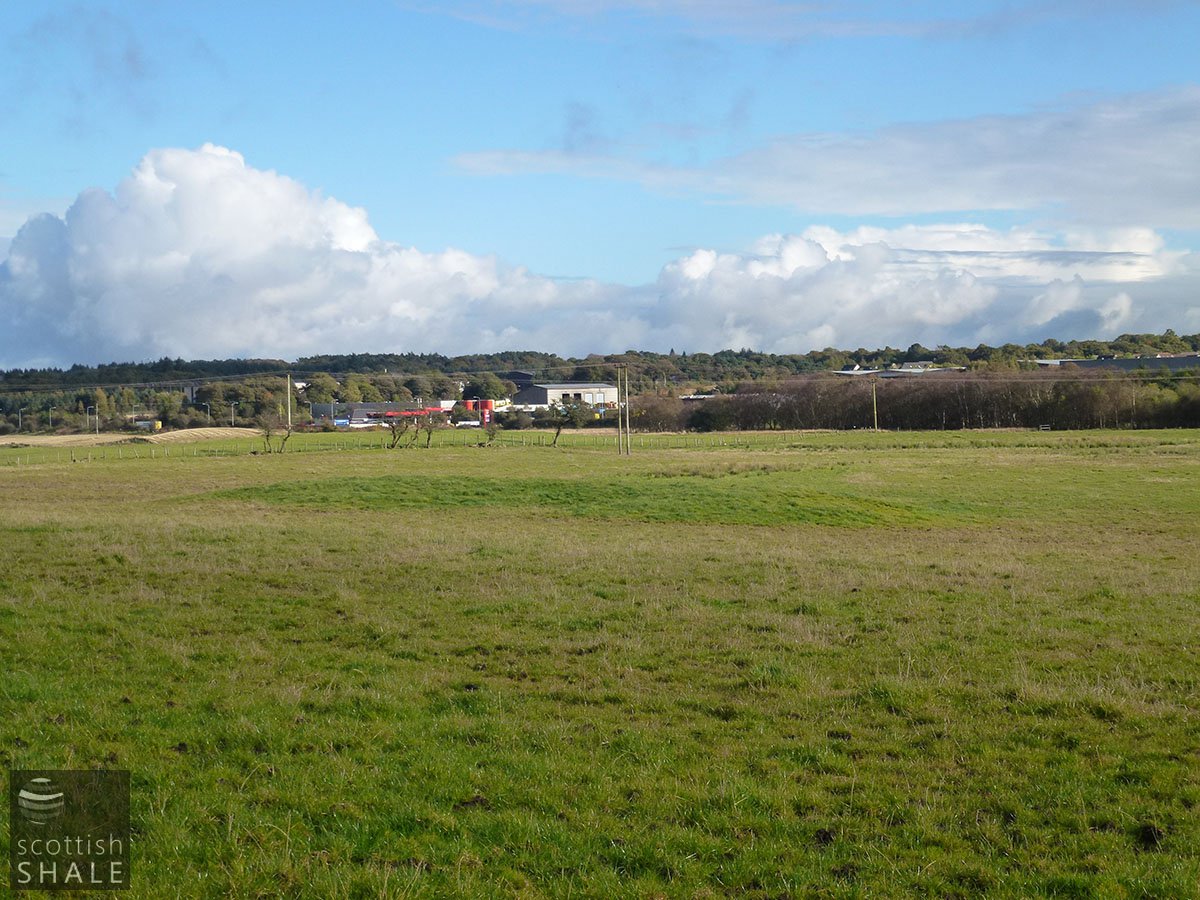 View towards mound, presumably related to the site of No. 2 mine. Looking east. October 2012. 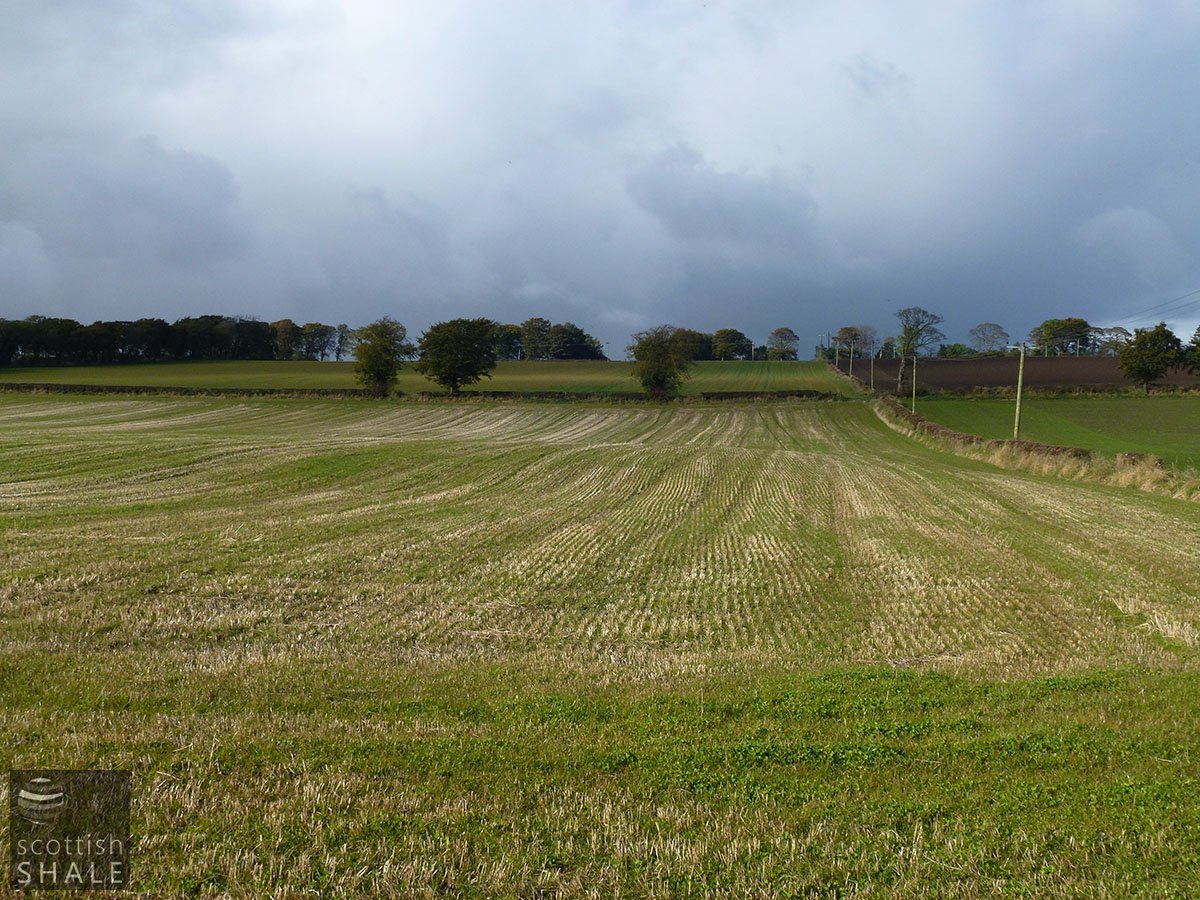 View towards presumed site of No. 1 Mine, marked by a slight raised platform of land within the field. October 2012. 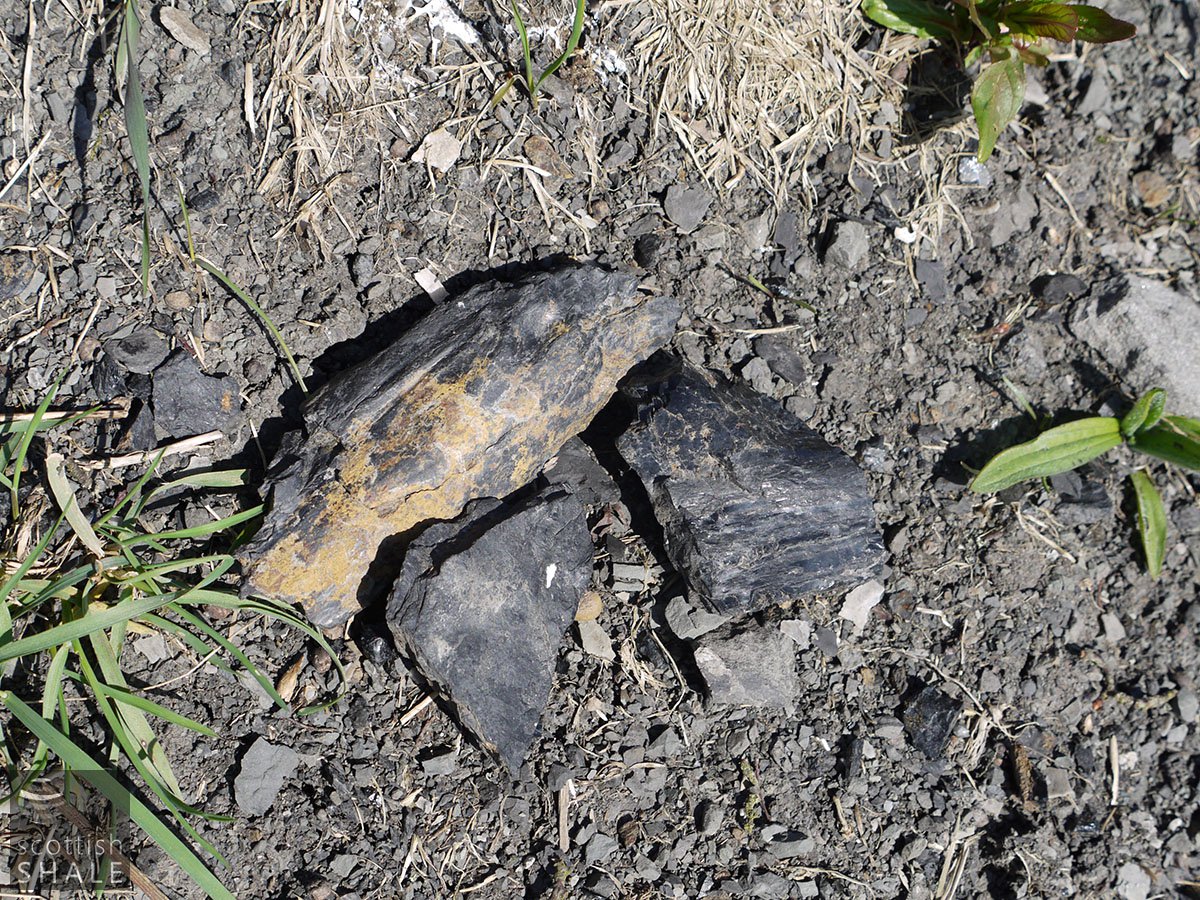 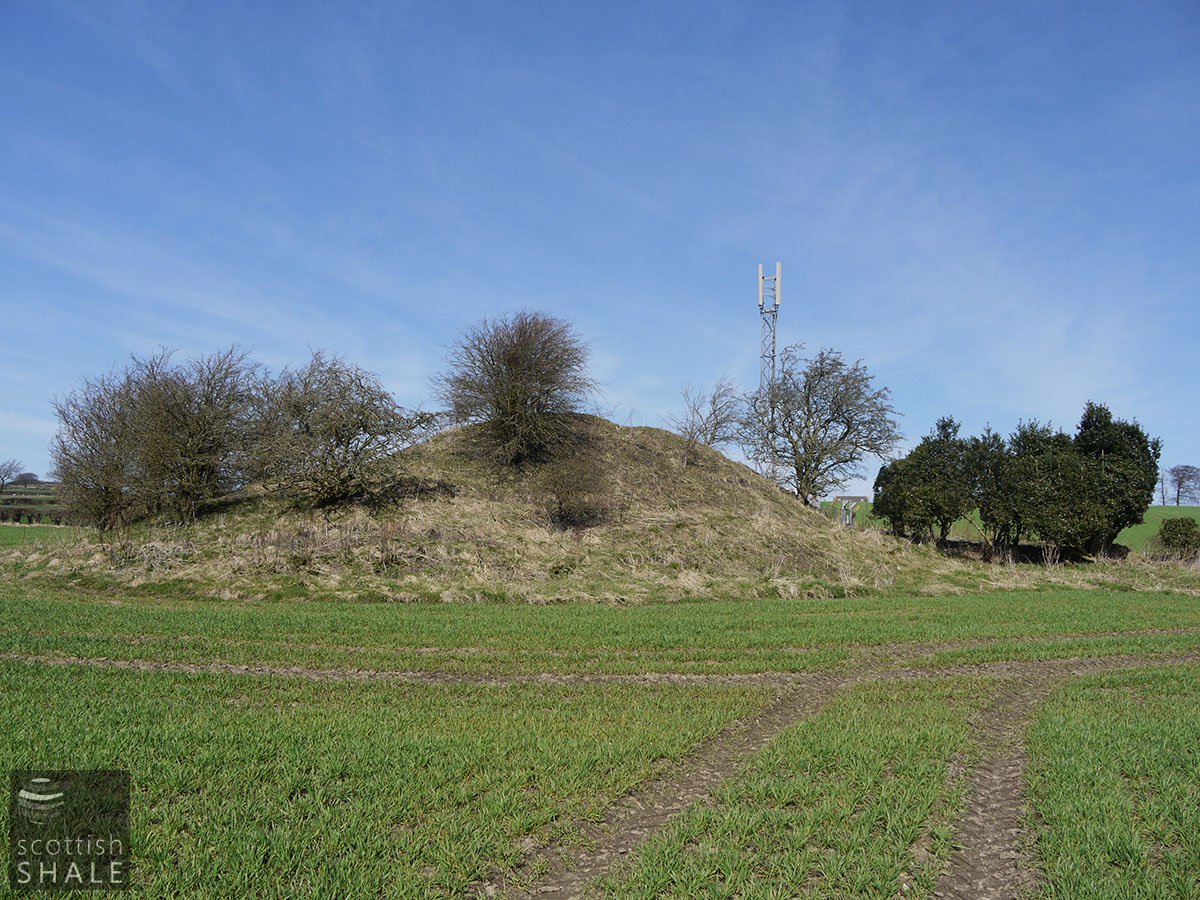 … the Grey shale, a seam of about 18 inches in thickness. This Grey shale is often sunk through, and could be more readily opened up, than any other shale seam in the country; but with the exception of a small trial at present being made of it at Drumcrosshall, there is none of it now working. It is said to be rich in solid paraffine and to contain from 22 gallons of crude oil per ton; but the oil is heavy or inferior in quality. ….... Occasionally a few inches of shale and gas coal are found associated with (the Houston Coal), as at Drumcrosshall, both of which are converted into oil.

TO LET ON LEASE

THE COALS AND SHALES of the Estate of Kirkton, about Two Miles distant from Bathgate and extending to about 400 acres. The Houston Coal Strata have a westerly dip in the vicinity of Kirkton; and as they crop out along the East march, it is believed that they exist in a large area of the Estate. The Coal seam has been found to have a thickness of upwards of 7 feet in tow bores in the Lanes; and a bore farther up the dip a seam of Shale 2 feet 6 inches in thickness was found at a depth of 35 fathoms. The Drumcross Oil Works, in connection with which the Houston Coals and Shales are extensively wrought, are distant about 100 yards from the east march of the Estate. Donald Ferguson, Overseer at Kirkton, will show the Lands; and further application may be made to Messrs GLEN & HENDERSON, Writers, Linlithgow, who will receive offers until 12th August next. Linlithgow, 19th July 1866.

MINE-CONTRACTORS WANTED to PUT OUT the COAL SHALE and FIRECLAY in No.1 MINE , and SHALE in No.2 MINE, DRUMCROSS, near BATHGATE. There are Houses on the Ground which the Contractor can have possession of. Specifications and further particulars to be had of Mr. WALKER, Drumcross; or LESTER, WYLLIE, & Company, 146 Buchanan St, Glasgow.

To be Exposed for SALE by Public Roup, within the Facility Hall, St. George's Place, Glasgow on Wednesday the 26th day of February next, at Two o'clock afternoon at the pleasure of the Offerers, subject to a reserved bid in favour of the Exposer, The TENANT'S RIGHT to a LEASE, for Sixteen Years, from Candlemas next, of the whole PARROT or GAS, HOUSEHOLD, COKING, and SMITHY COAL, and the whole BLACKBAND and CLAYBAND IRONSTONE, LIMESTONE, FIRECLAY and BITUMINOUS SHALE in and under the FARMS and LANDS of DRUMCROSSHALL and BYRES, in the Parish of Bathgate, and County of Linlithgow, extending 451 Acres or thereby: together with the OILWORK, BRICKWORK, and PLANT, including RETORTS and CONDENSORS on the Ground, all belonging to the Sequestrated Estate of Lester, Wyllie & Co. The Minerals are generally of Excellent Quality and easily wrought, the Coal commanding a high price in the Edinburgh Market; while the Shale and Gas-Coal wrought along with it can be advantageously sold, or the Oil can be manufactured therefrom on the Lands at a cheap rate. Altogether, the Lease is in favorable terms for the Tenant, and the Mineral Field and Works are well adapted for carrying on a Large Business in the Coal and Oil Trade. The Plant, which is in good condition, comprises all the requisites for a Going Work. The Stock of Wrought Minerals may be had at the Valuation. For further particulars apply to McCLELLAND, SON, & Co., Accountants, 140 St Vincent Street, Glasgow; JOHN RANKIN, Solicitor, Airdrie; GLEN & HENDERSON, Writers, Linlithgow; or BURNS & ALISON, Writers, 50 West George Street, Glasgow, in whose hands are the Articles of Roup, Inventory of Plant &c., and adjusted Lease. Glasgow 30th January 1868.

To be Let for such a number of years as may be agreed upon, and with Immediate Entry, THE MINERALS in the Lands of DRUMCROSS as the same belonging sometime to the late Andrew Kerr, Esq., now his Trustees. These Lands are situated in a Mineral district, being within tow miles of the Town of Bathgate, and one mile from the Edinburgh and Bathgate Railway, into which a Siding could be introduced. The minerals in the Lands consist of Smithy, Household, and Parrot or Gas Coal; also Shale and Fireclay of excellent quality. Journals of the Bores that have already beenput down will be exhibited to intending offerers. Further Particulars will be furnished on application to ROBERT BROOK, Solicitor, Bathgate; or to JAMES KERR, Esq., Drumcross House, the latter of whom will show the Lands.

VALUABLE COAL, MINERALS, &c, FOR SALE. There will be Sold, by Public Roup, within the Faculty Hall, St. George's Place, Glasgow, on Wednesday, 21st July, 1875 at Two o'clock PM (if not previously disposed of by private bargain). The Whole COAL, MINERAL, &c., in the LANDS OF DRUMCROSS, near BATHGATE, together with all the Valuable PIT, PLANT, ENGINE, MACHINERY and Others, in possession of the Exposers. The supply of Coal. &c. in the Lands is believed to be extensive, and in the hands of an energetic Party would yield a very profitable Return. The Lease is for 12 years from Whitsunday 1872. Private Sealed Offers, to be addressed to the liquidators, at the registered Office of the Company; 4 North Court, Royal Exchange, Glasgow; and the Articles of Roup will be exhibited by the Subscriber. RICHD., M'CULLOCH, Writer.