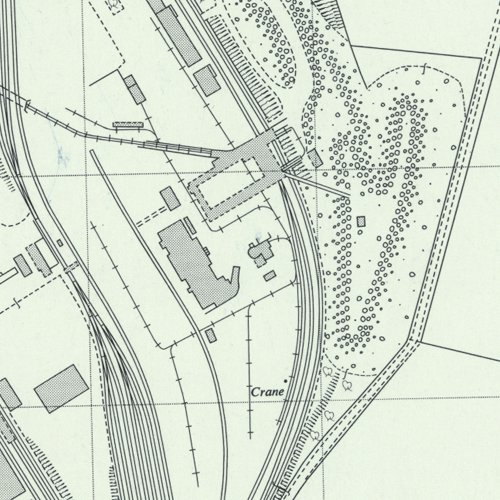 One of the largest, deepest and longest-lived of shale workings, and the last shale pit to remain in operation. Westwood was Scottish Oils Ltd's showcase pit during the 1920's and 30's, featured in their promotional films, and received many important visitors. See foot of page for a full technical description.

Mapped by the Ordnance Survey of c.1955, showing the pit in production.

These pits were sunk to the Dunnet Shale by the Oakbank Oil Company Ltd in the year 1915 and command and area of about 500 acres of oil shale, comprising the Broxburn and Dunnet seams. The pits are circular in shape, the downcast or winding shaft being 16' in diameter, the upcast being 14' in diameter. Both pits are 700 feet deep and are brick-lined from top to bottom. At present only the downcast shaft is used for winding shale and this pit is fitted with eight wire rope guides suspended in the shaft and kept taut by large balance weights at the bottom. The two cages are of the single deck type, holding two hutches each, and are raised and lowered in the shaft by steel wire ropes 1.25" in diameter.

There are two seams of shale presently being worked; Broxburn and Dunnet. The distance between the seams is 380 feet. The Broxburn Shale is about 5' thick and the Dunnet Shale from 12' to 14' thick. The method of working is stoop and room. In the first working of the Dunnet, a thickness of only 9' is taken the remainder being recovered in the second working or stooping operation. The shale to the the dip is brought from the working faces to the pit bottom by means of mechanical haulage of either the endless rope type or single rope dook haulage. Shale to the rise is lowered by gravity haulages which are self-acting. Water is pumped from the mine by three motor driven turbine pumps consisting of two 500 gallons per minute pumps, and one 450 gallons per minute. The present output is 650 tons per day, but the plant is capable of dealing with 800 tons in eight hours.

Steam is raised to a pressure of 160 lbs. per sq. inch by means of three Lancashire boilers 9'10" diameter and 24'0" long. There boilers are fitted with underfeed stokers and forced draught is supplied by means of a fan. Steam passes through Cooper and Greig superheaters placed at the back of the boilers. Steam is supplied to the winding engines and the power station.

The winding engines for No.1 pit are of the coupled non-condensing type with cylinders 20" diameter and 3'6" stroke. The drum is 10' diameter and carries a 1.25" diameter winding rope for the downcast pit. The engine is fitted with a Barclay controller, which is a device for the prevention of overwinding. Should the winding engineman fail to reduce the speed of his engine when the ascending cage nears the top of the pit, the controller, by means of a system of levers and governors, automatically cuts off the supply of steam to the engineman and applies a powerful brake, thus bringing the engine to rest. The winding engine for No.2 pit have 18" cylinders and 4'0" stroke. This engine is mainly used at present for raising and lowering the cages for the purpose of inspecting the shaft which contains the water pipes and electric cables leading underground. 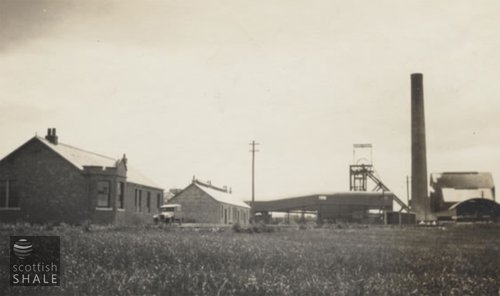 There are two generating sets in the power station, each with an output of 625 K.V.A., 820 Amps. 440 volts, 25 cycles, at a speed of 250 r.p.m. The alternators are coupled direct to Bellis and Morcom triple-crank compound condensing engines. A single Korting jet condenser deals with the exhaust steam from both engines, and is working in conjunction with an open cooling pond.

The generators supply current for lighting on the surface, power on the surface and underground and power to No. 26 mine Polbeth. Coupled to each generator shaft is a direct current exciter of 21 K.W. 250 r.p.m. 190 amps. 110 volts. While supplying the exciting current for the field magnets each alternator, this machine has surplus energy which is used for lighting lamps on the surface. The generators supply power at 440 volts for driving motors on the surface and also for lighting underground after passing through the step down transformer. There is also in the power station and oil-cooled transformer, which raises the voltage from 440 to 3300 for transmission by overhead line to No .26 mine, Polbeth.

The air passes into the mine through the downcast shaft and after travelling round the workings is drawn out through the upcast shaft by means of a Sirocco fan, 105 inches in diameter, belt driven at a speed of 140 r.p.m. The ventilating pressure, or the difference in pressure of the air in the two shafts is registered continuously on a recording water gauge placed in the fan-house, and is about 1.5" W.G.

Dated 8/6/27, the original source of this transcription is not known. 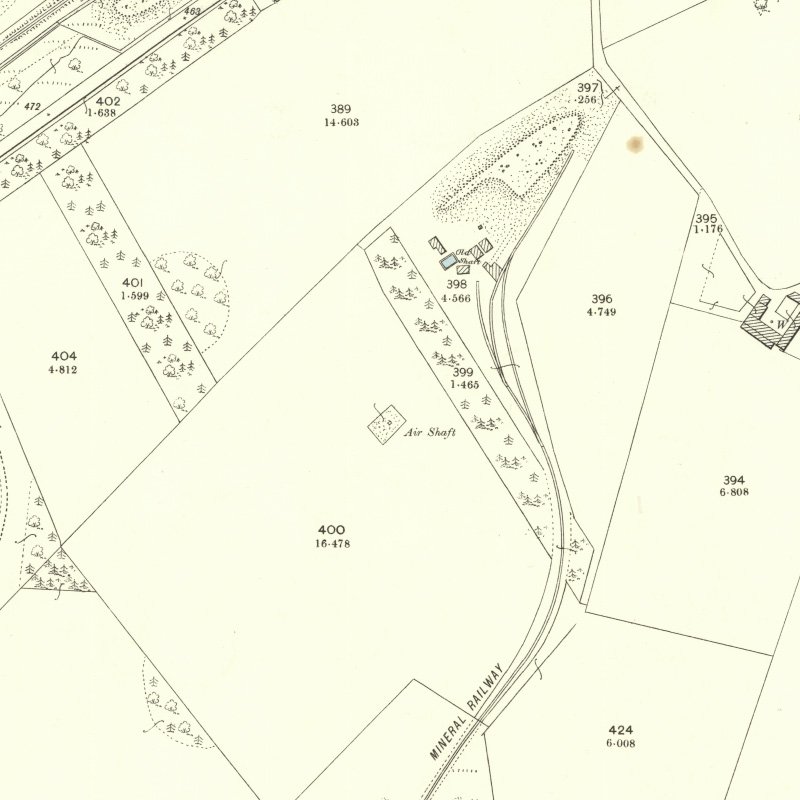 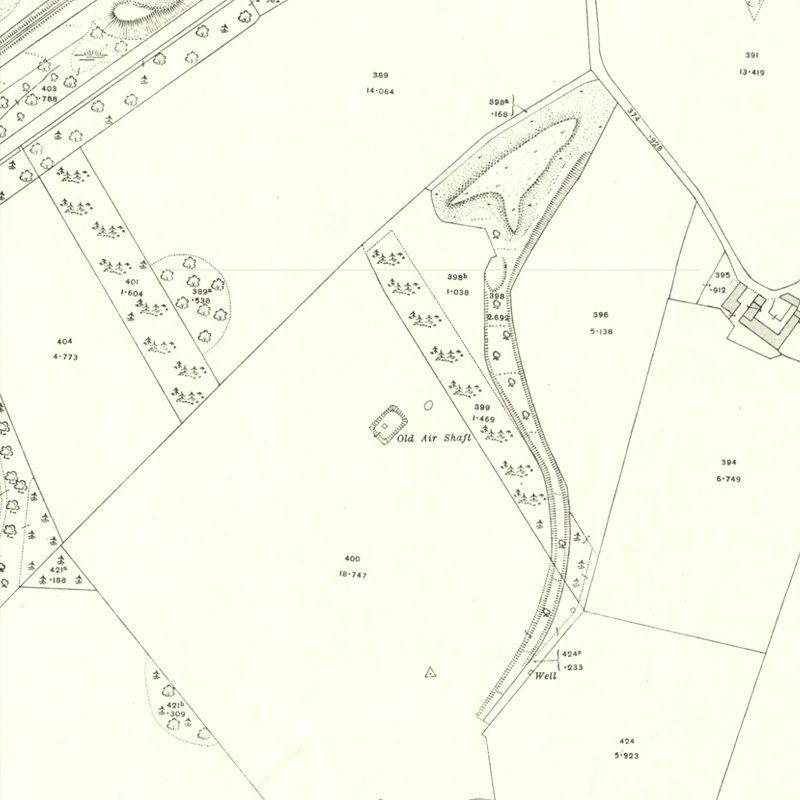 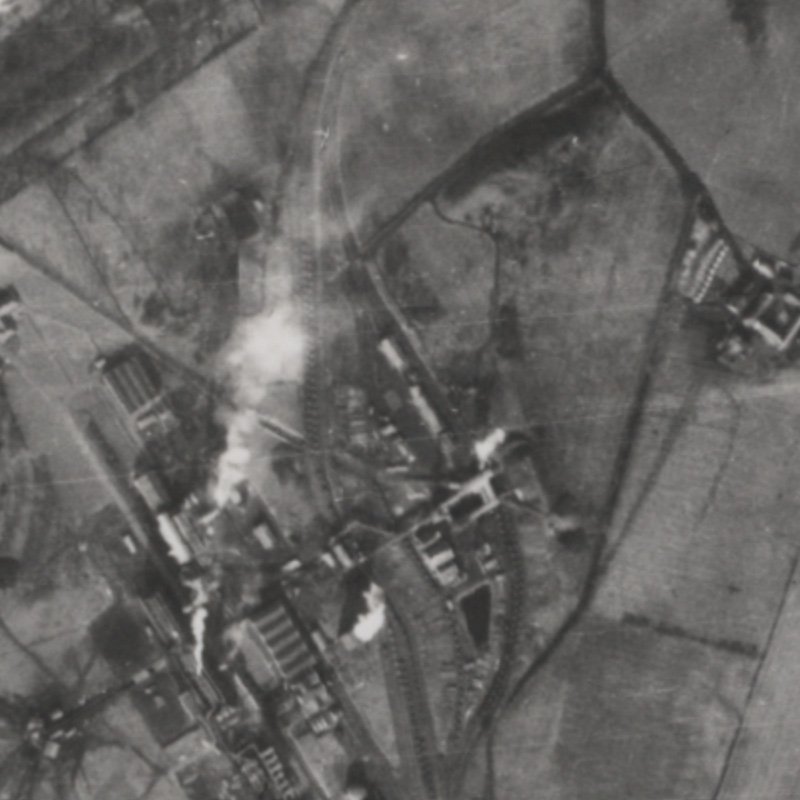 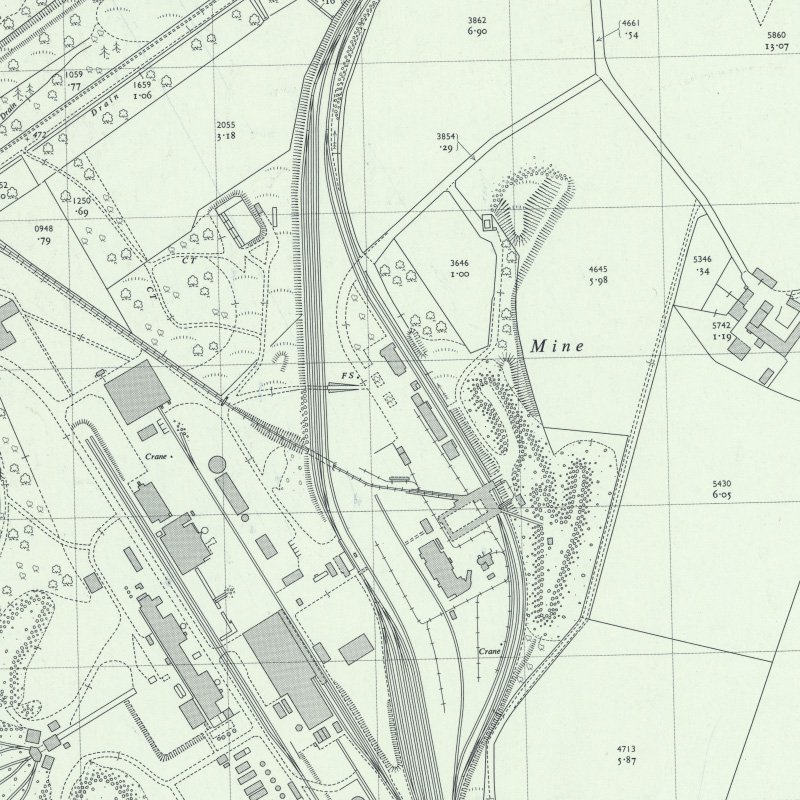 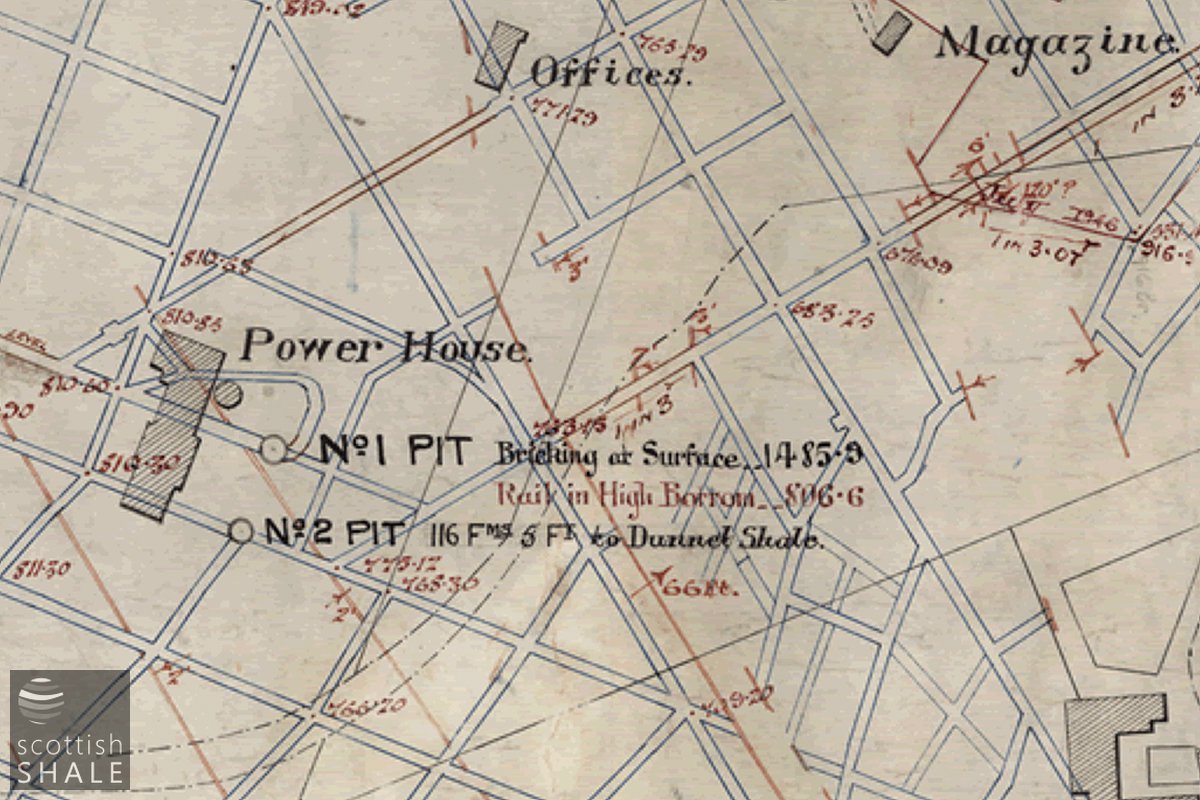 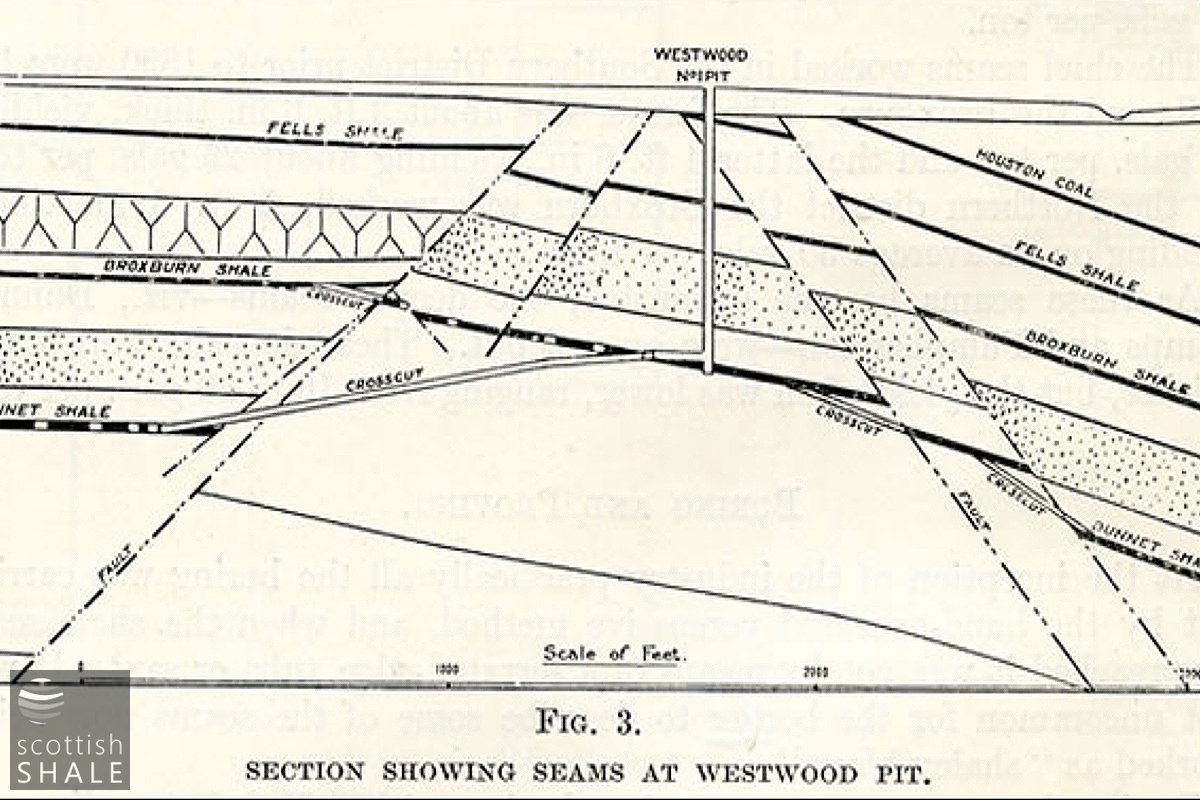 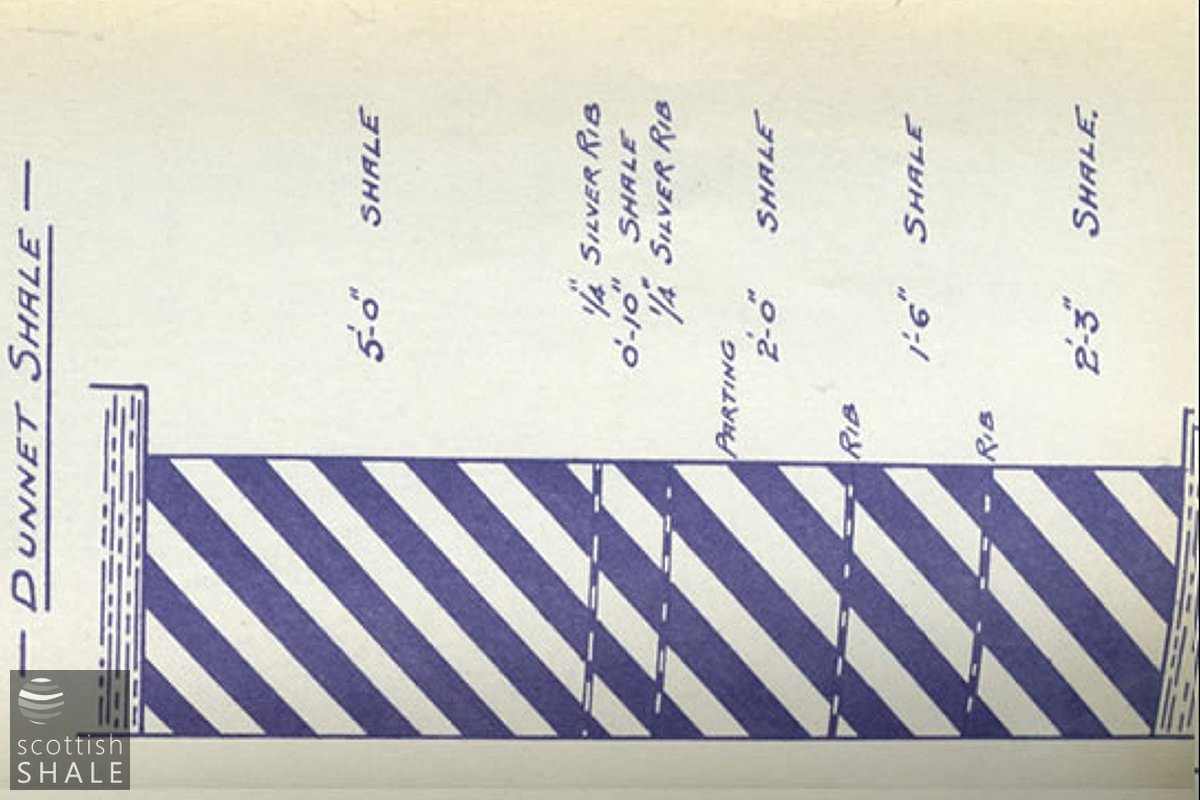 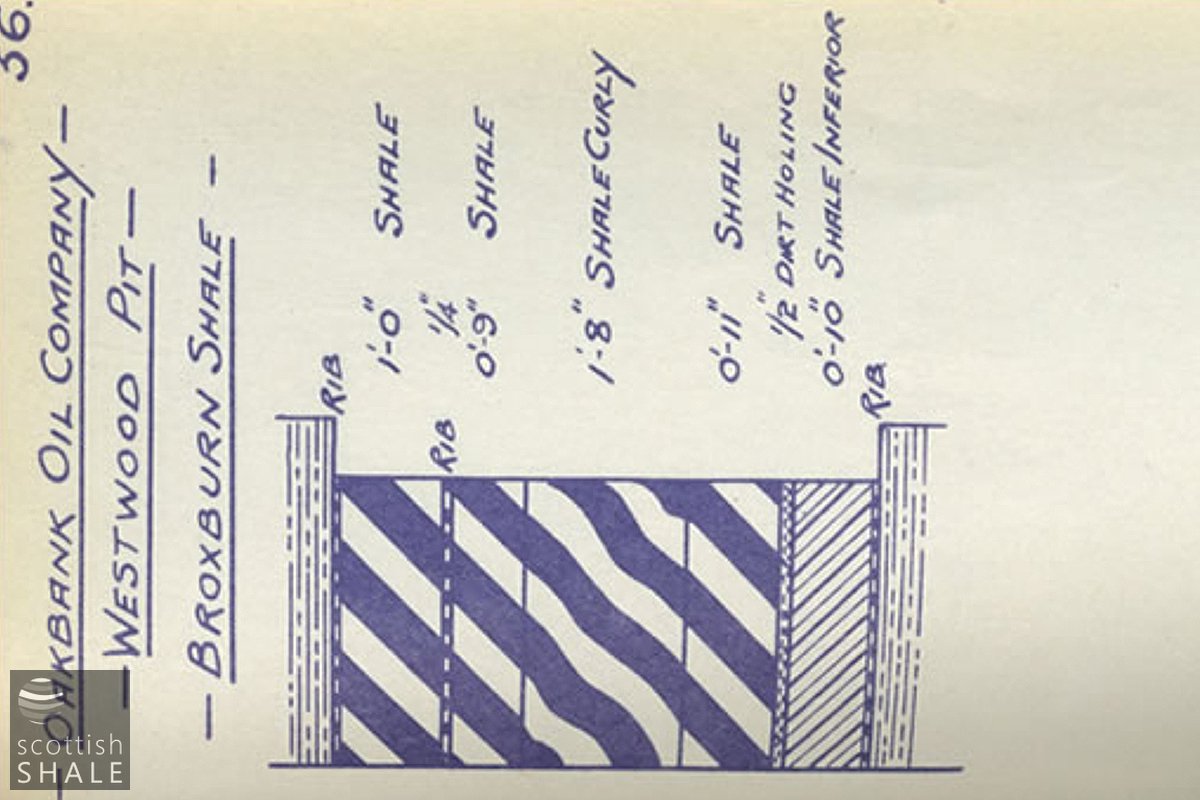 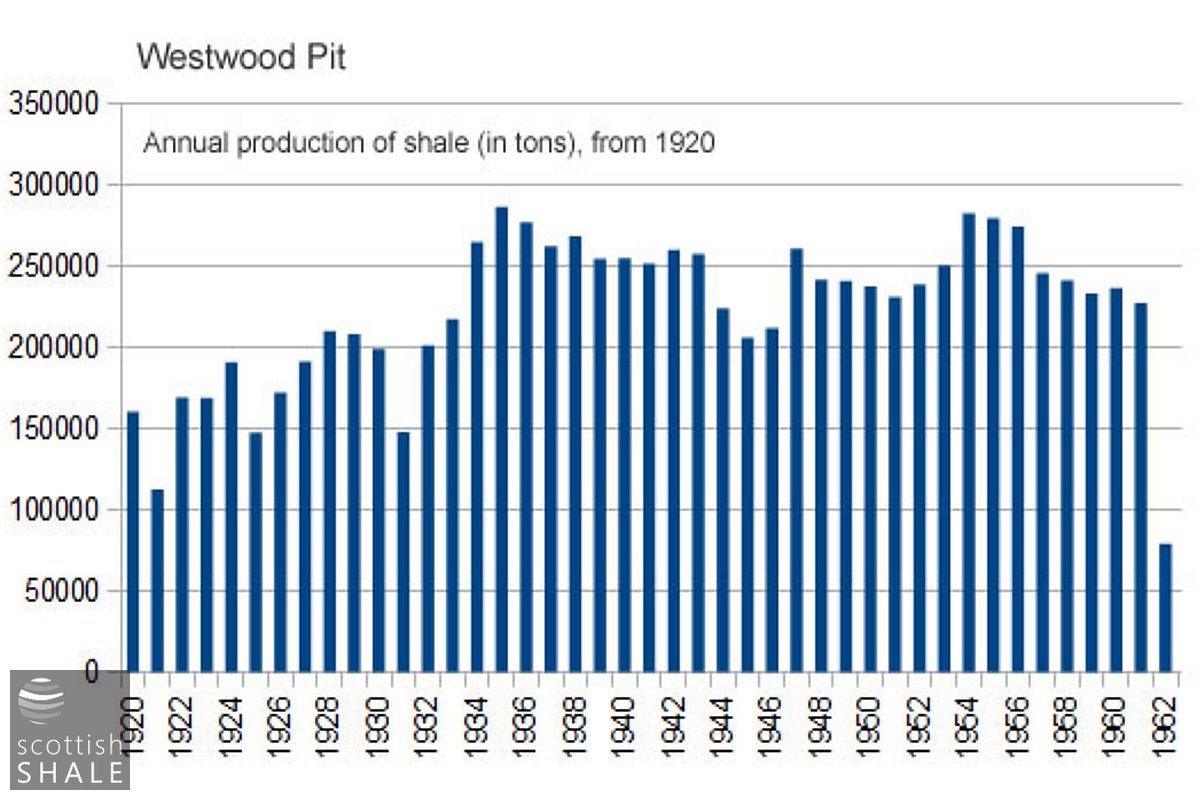 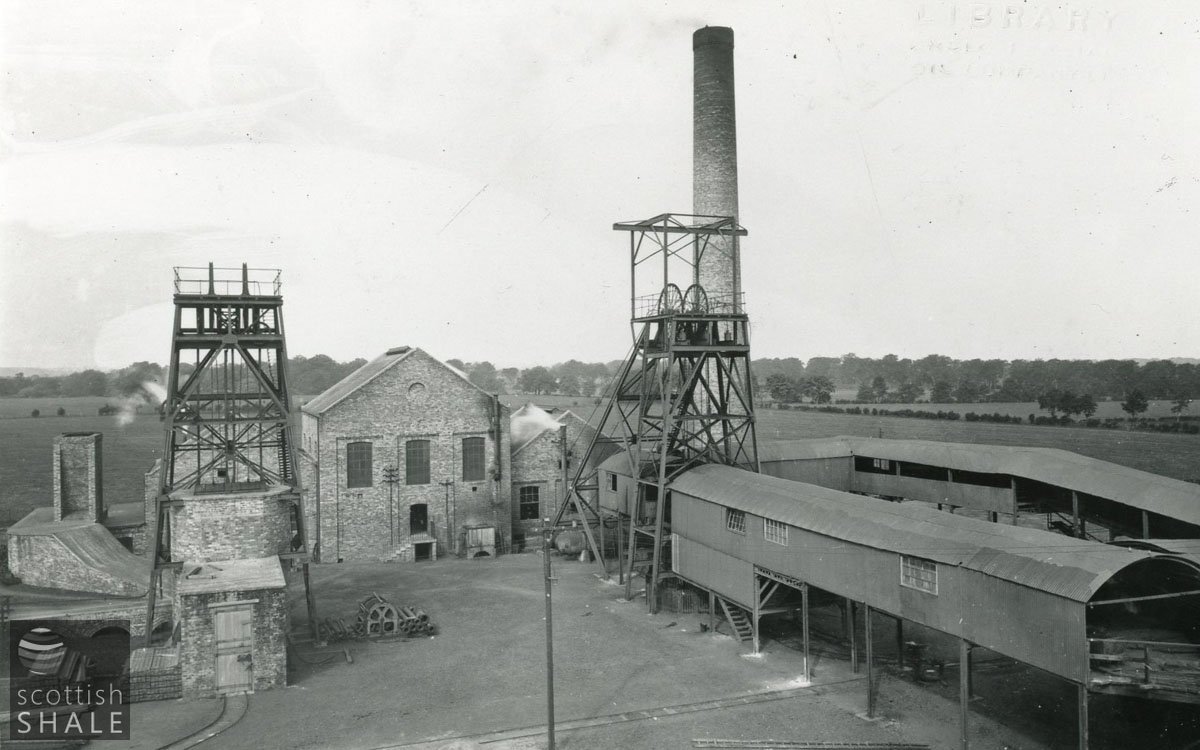 "A view of the surface arrangement showing two shafts. These shafts are equipped to handle men and materials, but that on the left is normally used for ventilation only. The air-duct and fan-house are seem to the left. Each shaft has its own independent steam-driven winding engine in the building immediately behind the head-gear. The taller building between the shafts houses the steam-driven generator sets which supply power for pumping and hauling underground." See full record, R10-00354 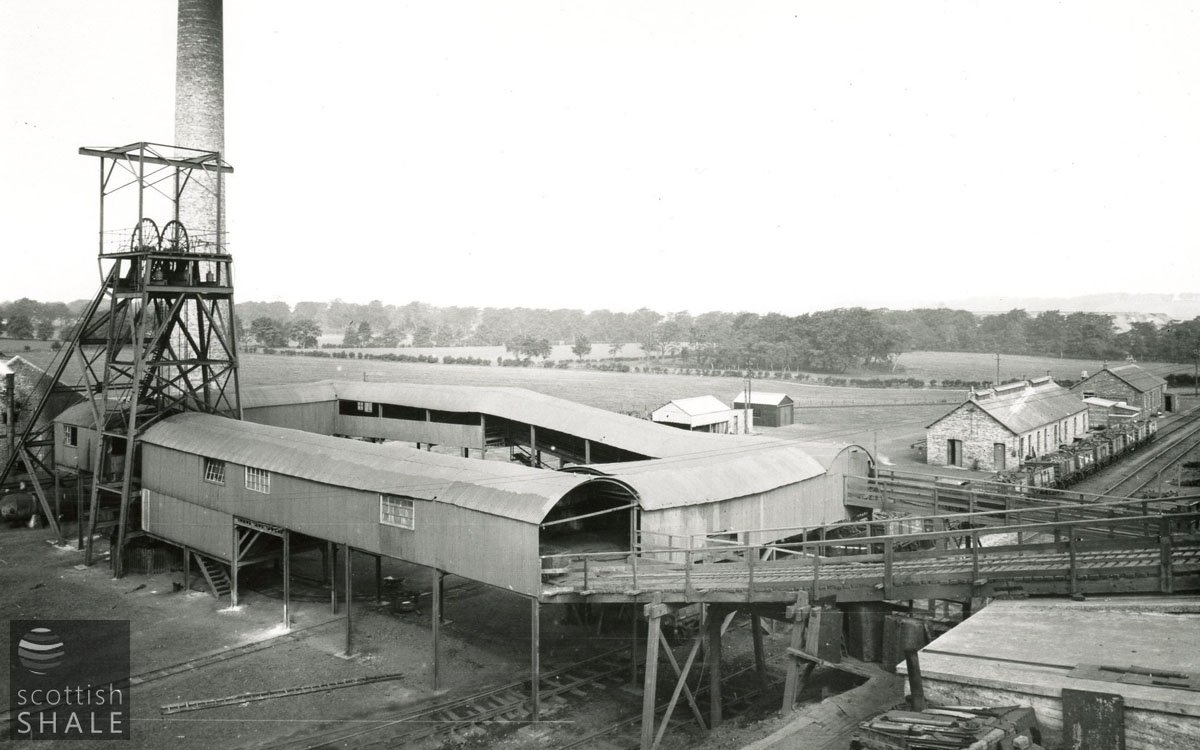 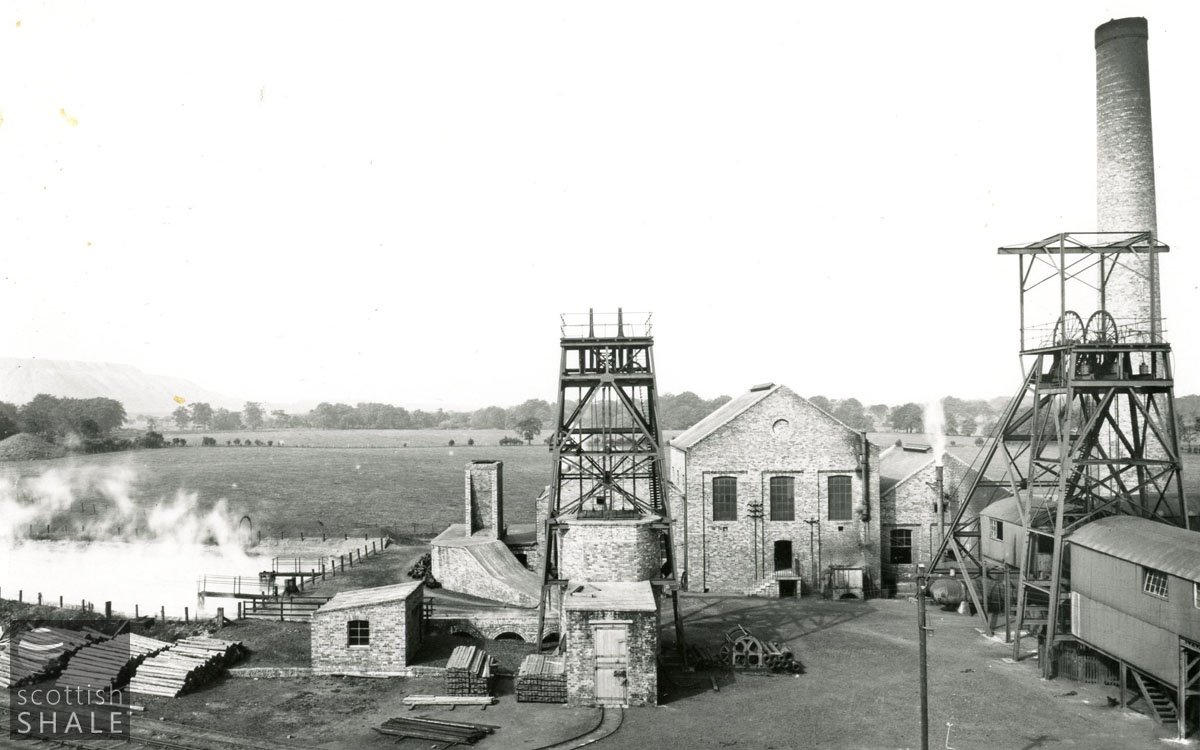 "The hutch roads for handling the output, which after being weighed, is either emptied into railway wagons on the tracks below, or taken up the incline road to the right to be put into storage in the "bing". Buildings in the background are offices, workshops etc." See full record, R10-00277 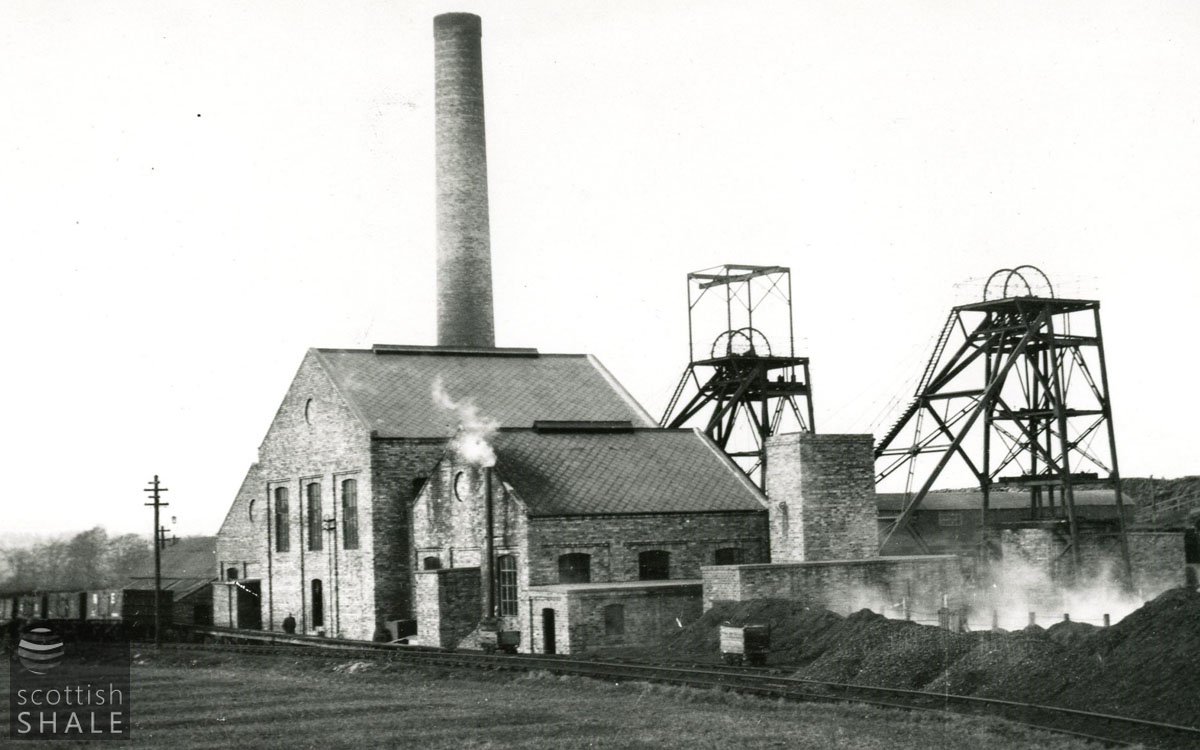 RUSH OF WATER SCOTTISH SHALE MINE STRENUOUS EFFORTS TO SAVE PIT. The mining managers of Scottish Oils, Ltd., have had an anxious time dealing with a great inrush of water which took place in Westwood shale pit at West Calder. Millions of gallons of water broke in from a number of disused pits in the district. The pumps were unable deal with the water, but special pumps were hurried to the pit and electric cables laid for power. The water came in at the rate of 4000 gallons per minute, at pressure of 166 lb. per square inch. A dam was constructed in the pit, and the water sealed off tho main workings. Great courage was displayed the miners who went to work as usual to provide shale to keep the retorts at Addiewell and Oakbank oil works going. The water is still pouring into the workings, but it now under control, and it believed that unless there is serious breakdown with the machinery, the pit will be saved. 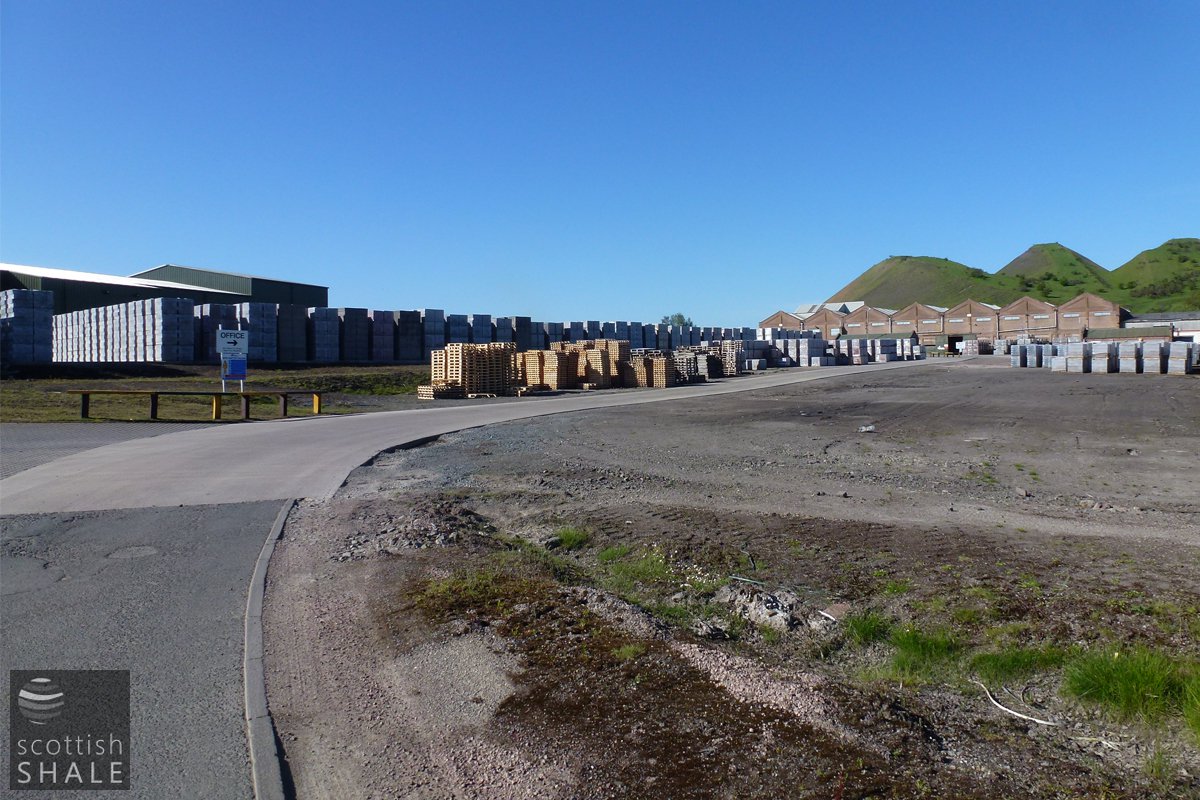 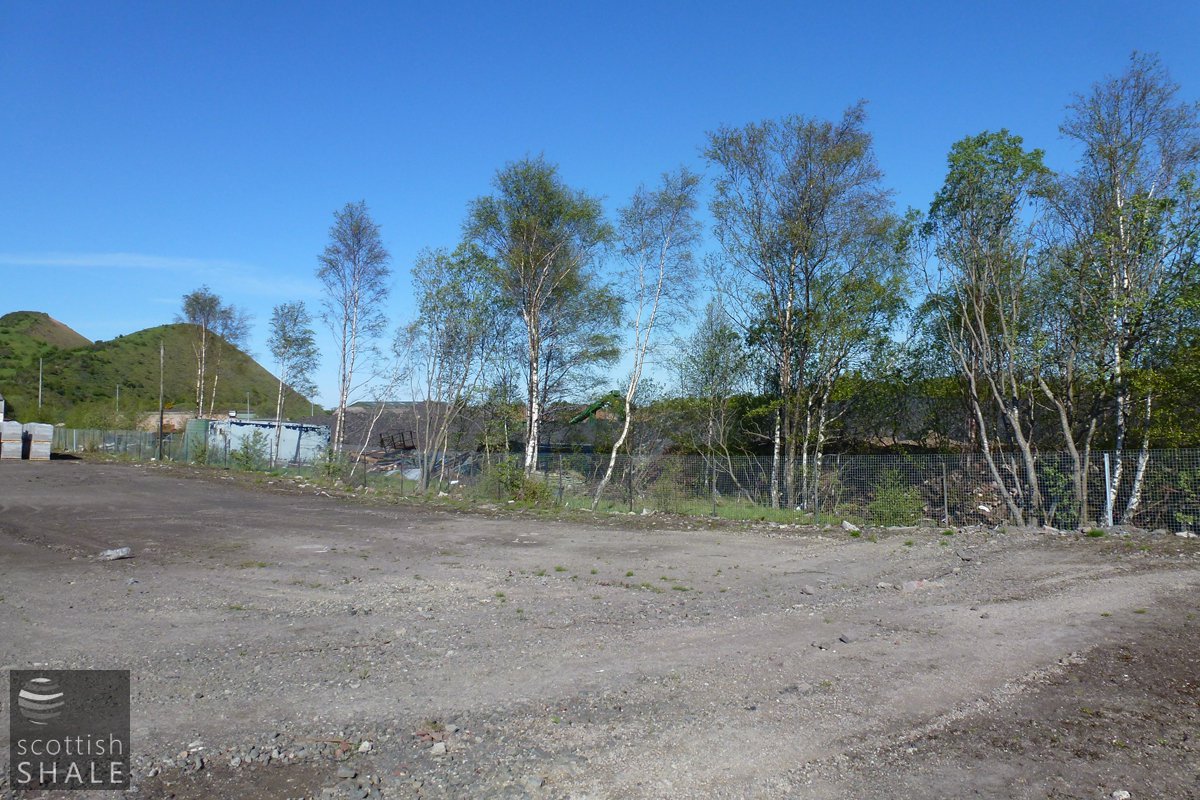 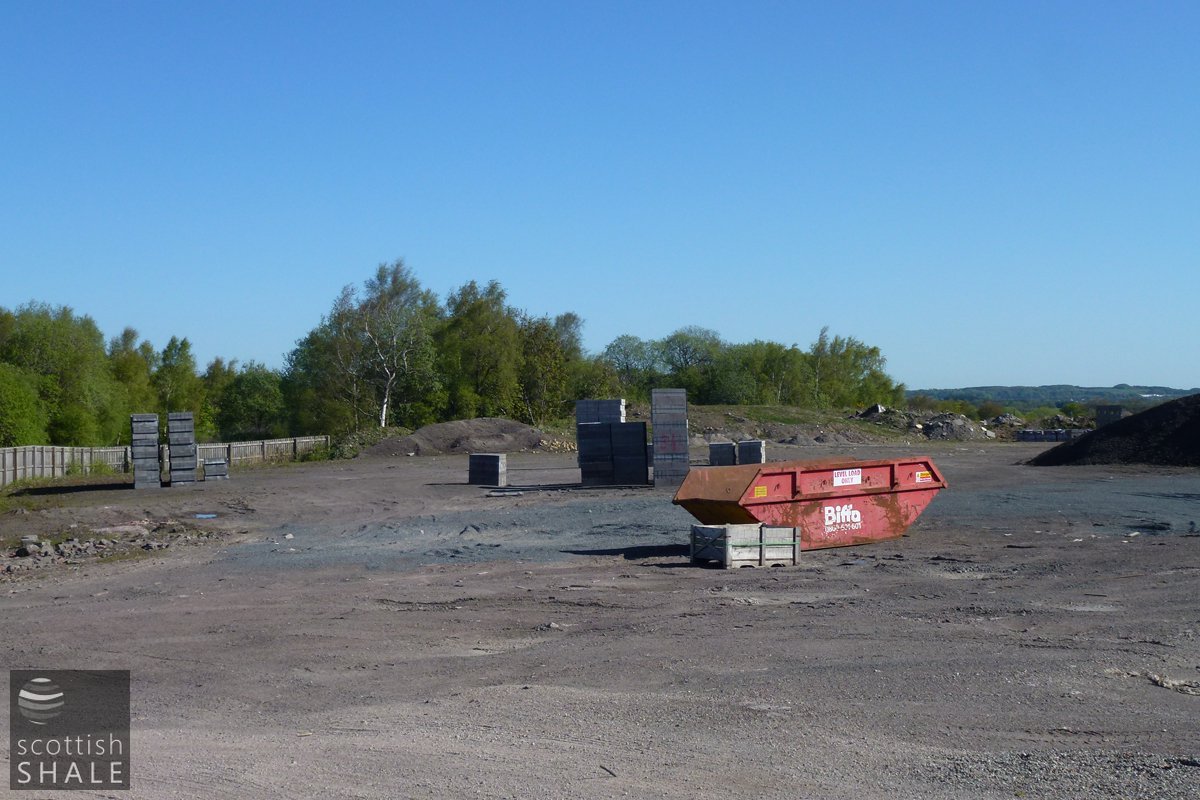 Coal Authority Mine Abandonment Catalogue No. 15,106, showing workings in the Fells, Broxburn and Dunnet Shales from Westwood Pit, abandoned in 1962. 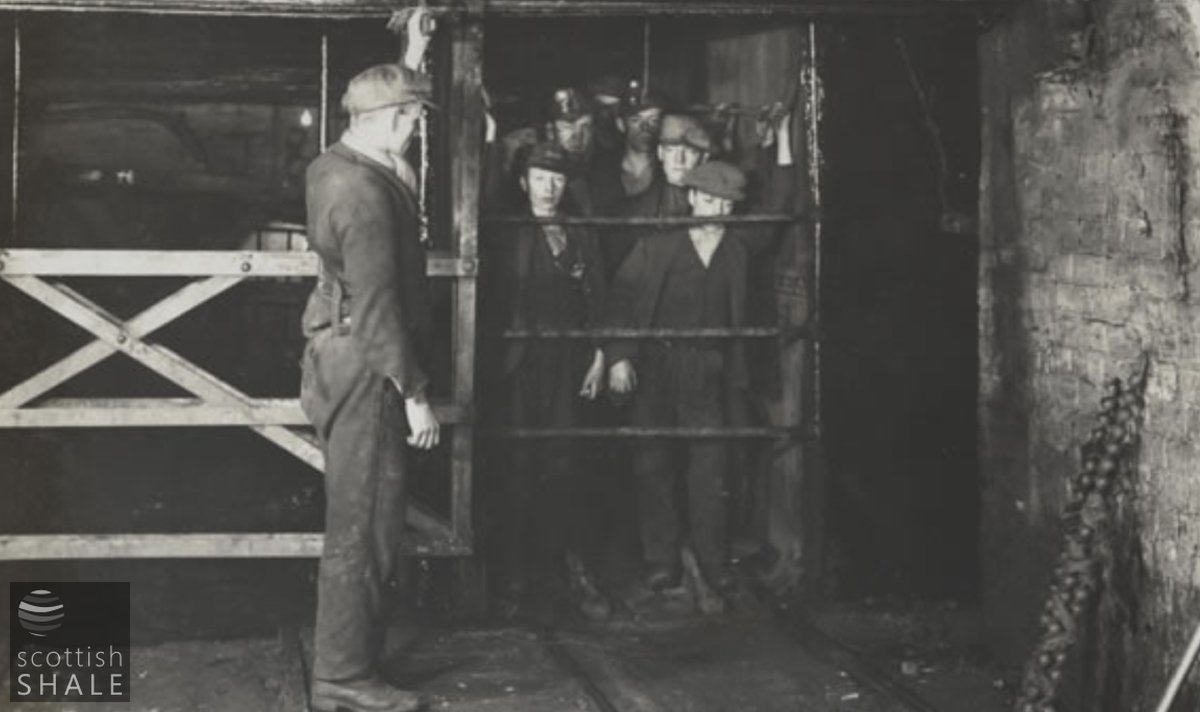 " A party of men in the cage at the pit bottom, waiting to be hoisted to the surface. The man in the foreground in the pit-bottomer, and in his hand is seen the signal lever with which he signals to the winding engineman on the surface that the cage is ready to depart. Leaning against the wall on the right are the drills, used for boring shot-holes, waiting to be taken to the surface for re-sharpening". c.1929. 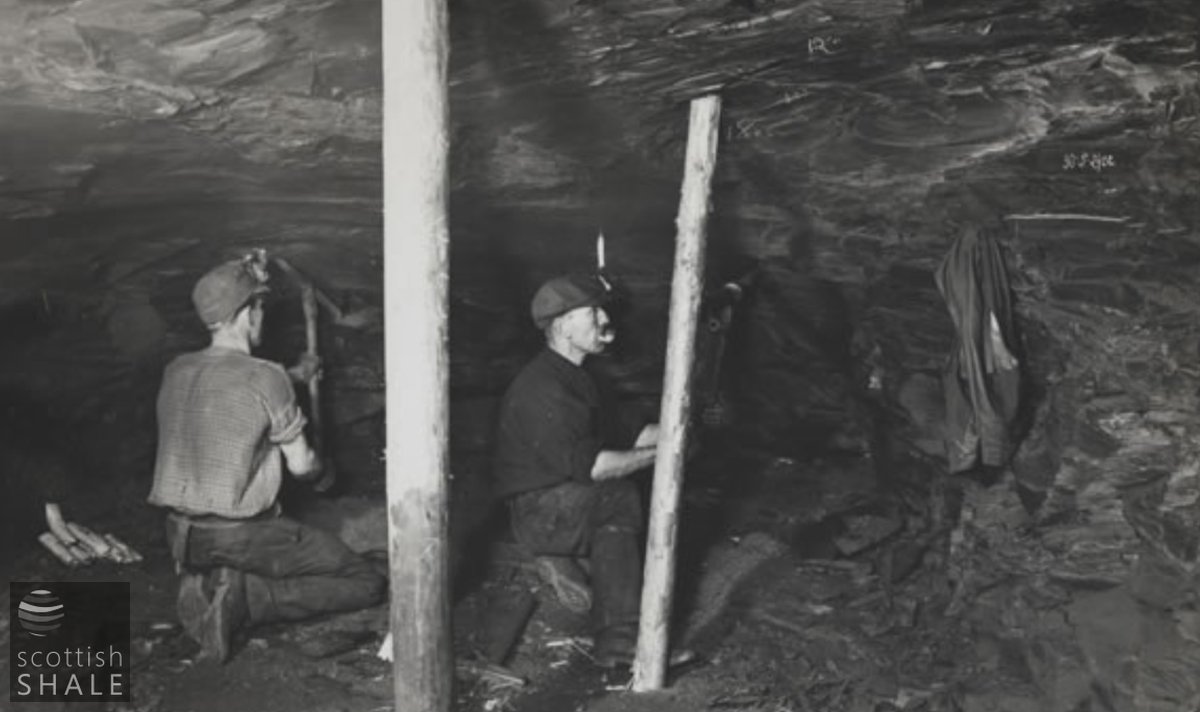 "The working face. The man on the right is boring a shot-hole with a ratchet drill which is held in place by a "tree" fixed between the roof and the floor. The man on the left is preparing to load a shot hole, the charge for which is lying on the floor to the left. Chalked on the wall are the initials of the fireman who visited the place before the miners commenced work, and the date of his visit". 30-05-1929. 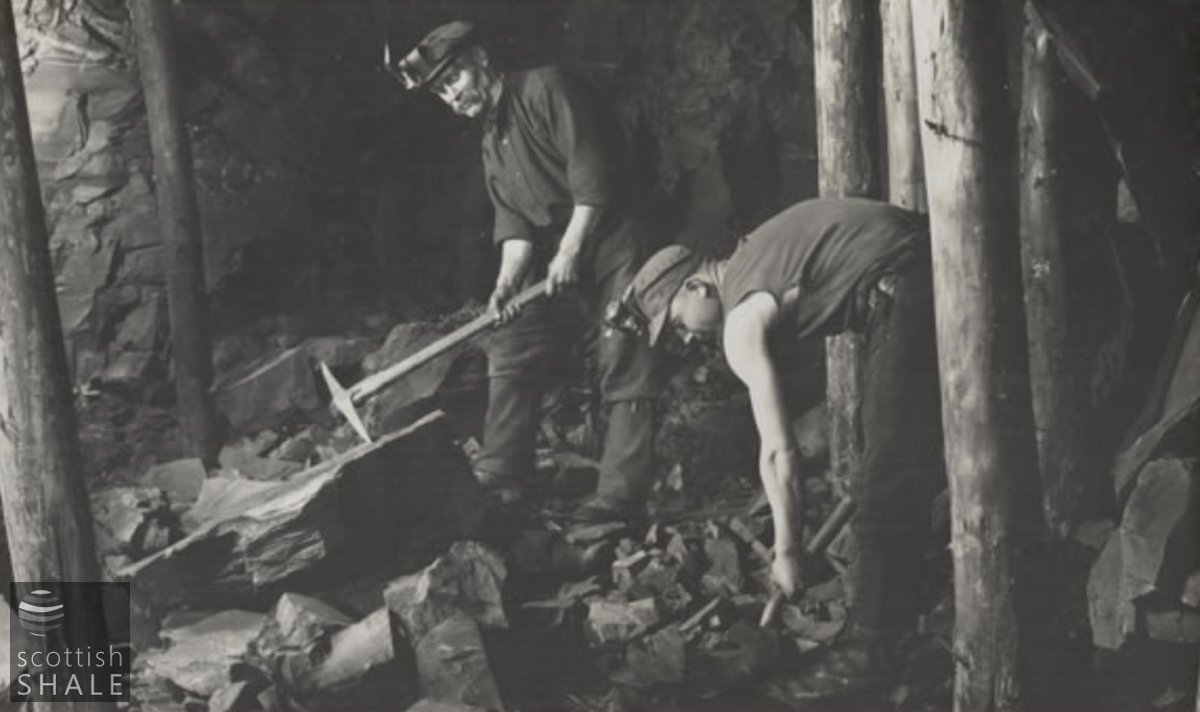 "Miners clearing up the working face after a shot has been fired". c.1929. 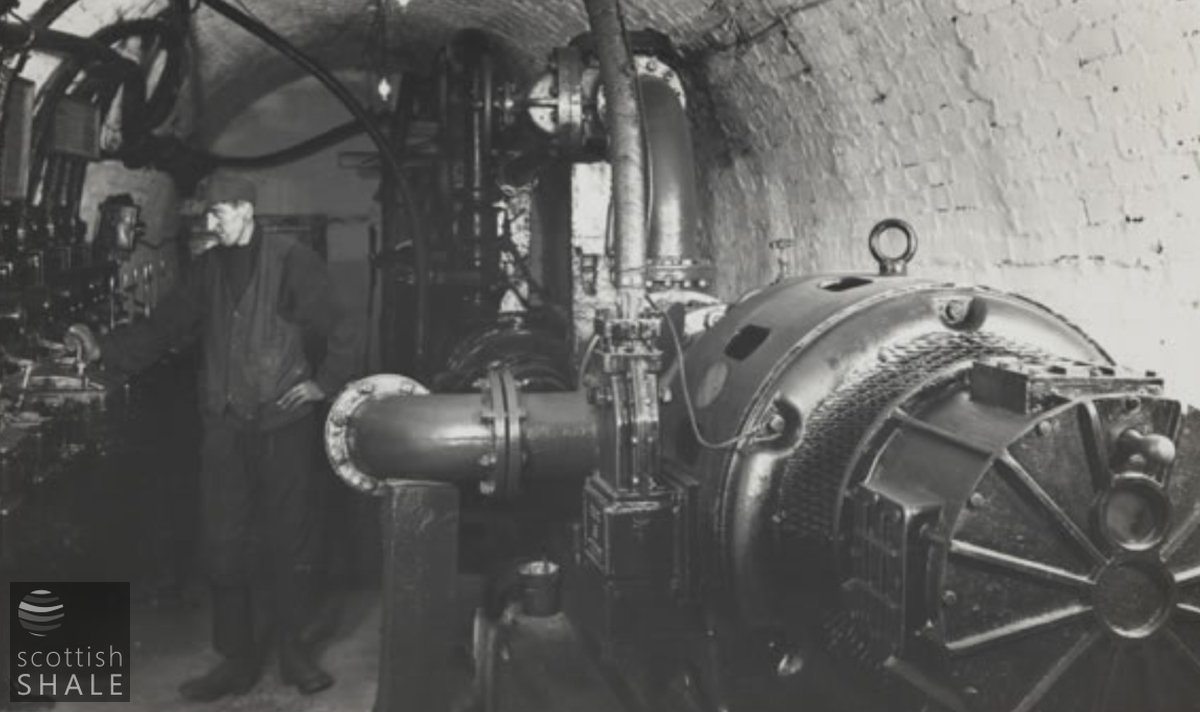 "Attendant in charge of a group of electrically-operated turbine pumps in a brick-lined chamber 700ft. below the surface. The capacity of each is about 500 gallons per minute." c.1929.