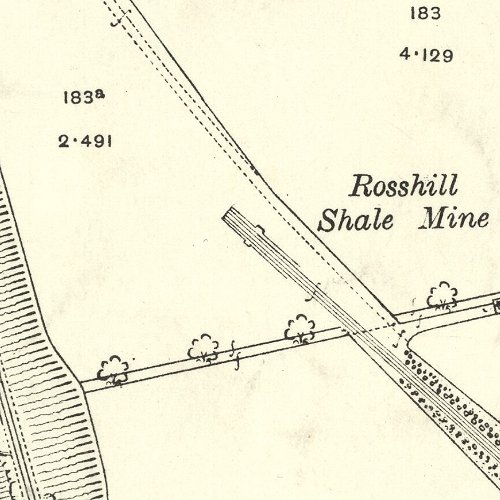 A bold scheme by the Dalmeny Oil Company to exploit shale reserves deep beneath South Queensferry and the River Forth.

Mapped by the Ordnance Survey of c.1917, showing mine entrance and route of tramway. 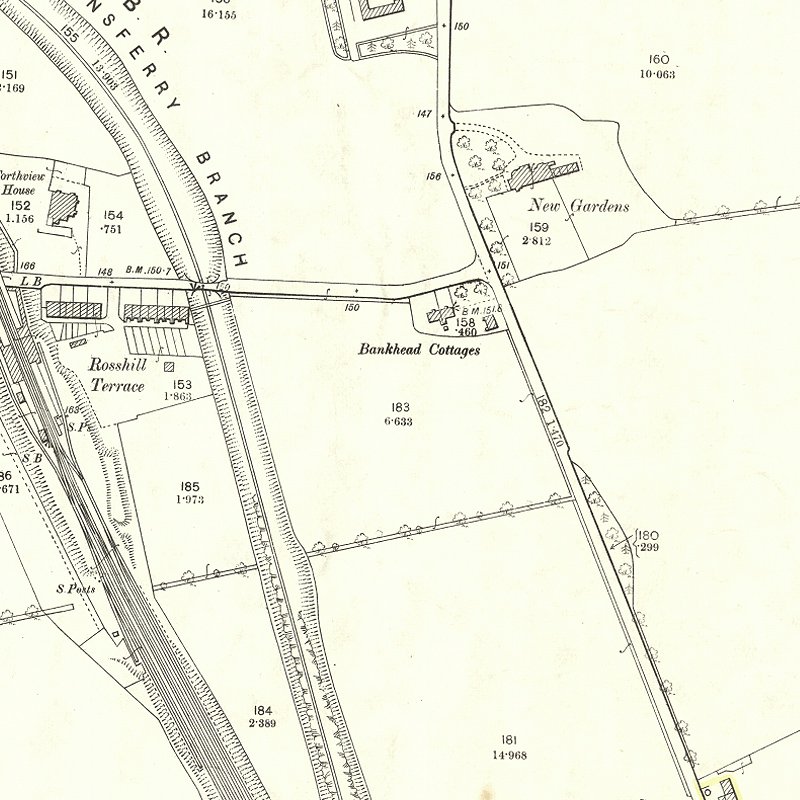 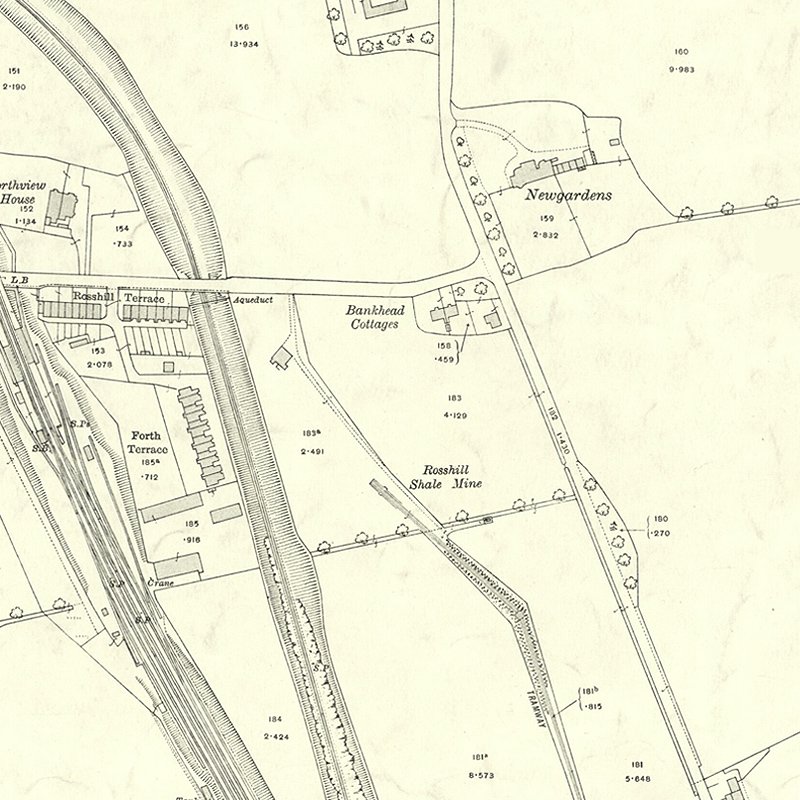 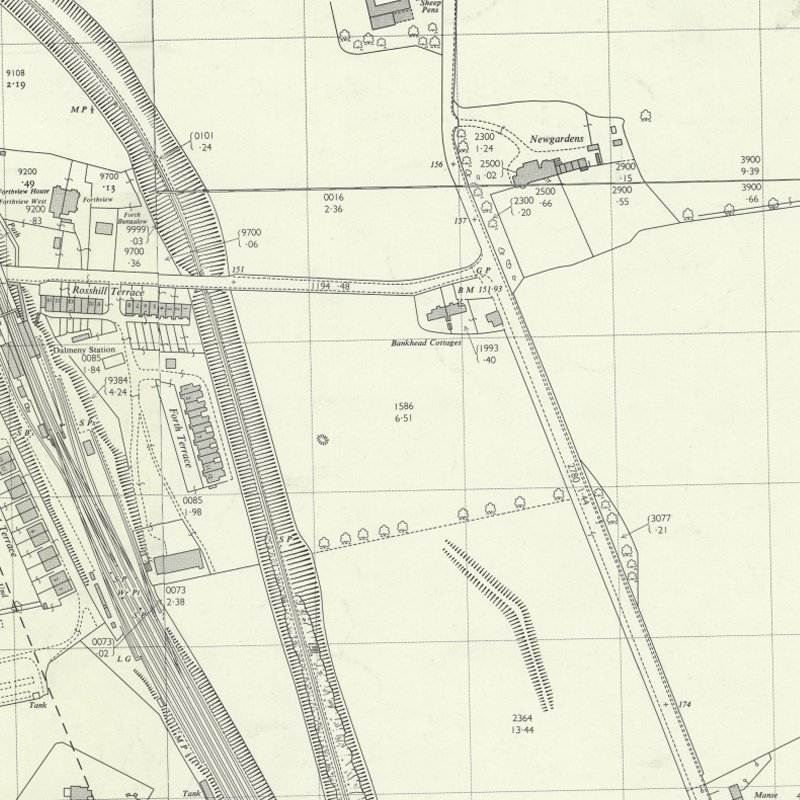 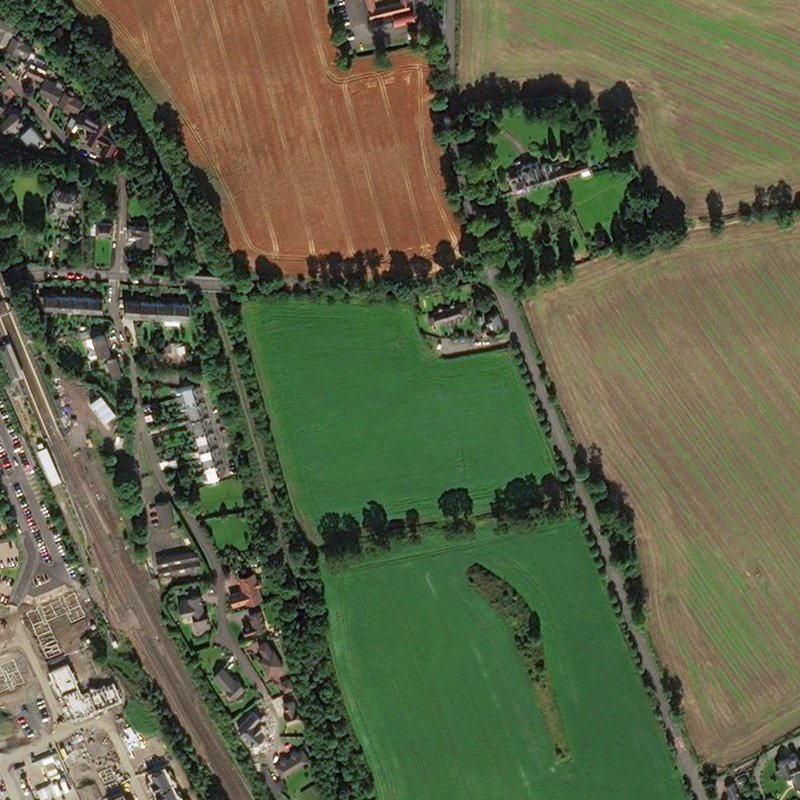 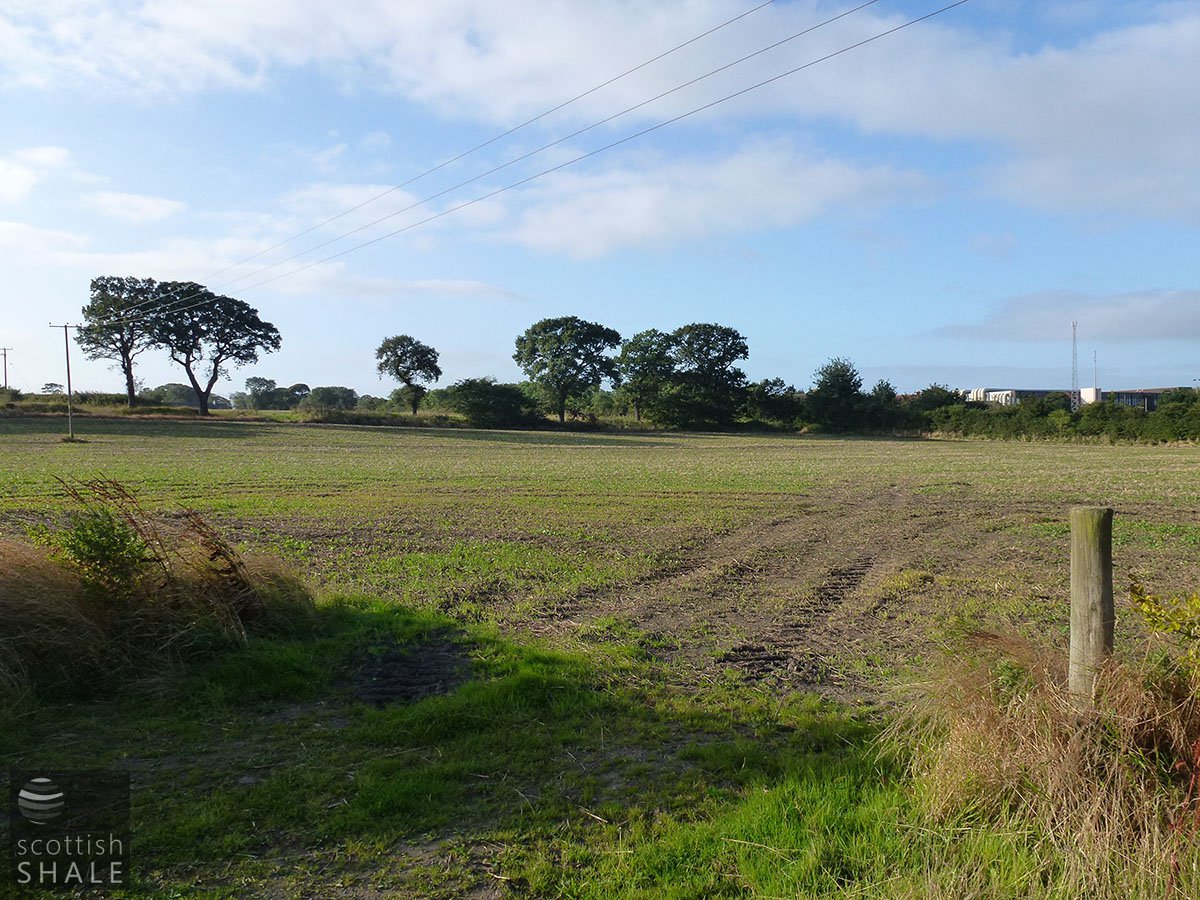 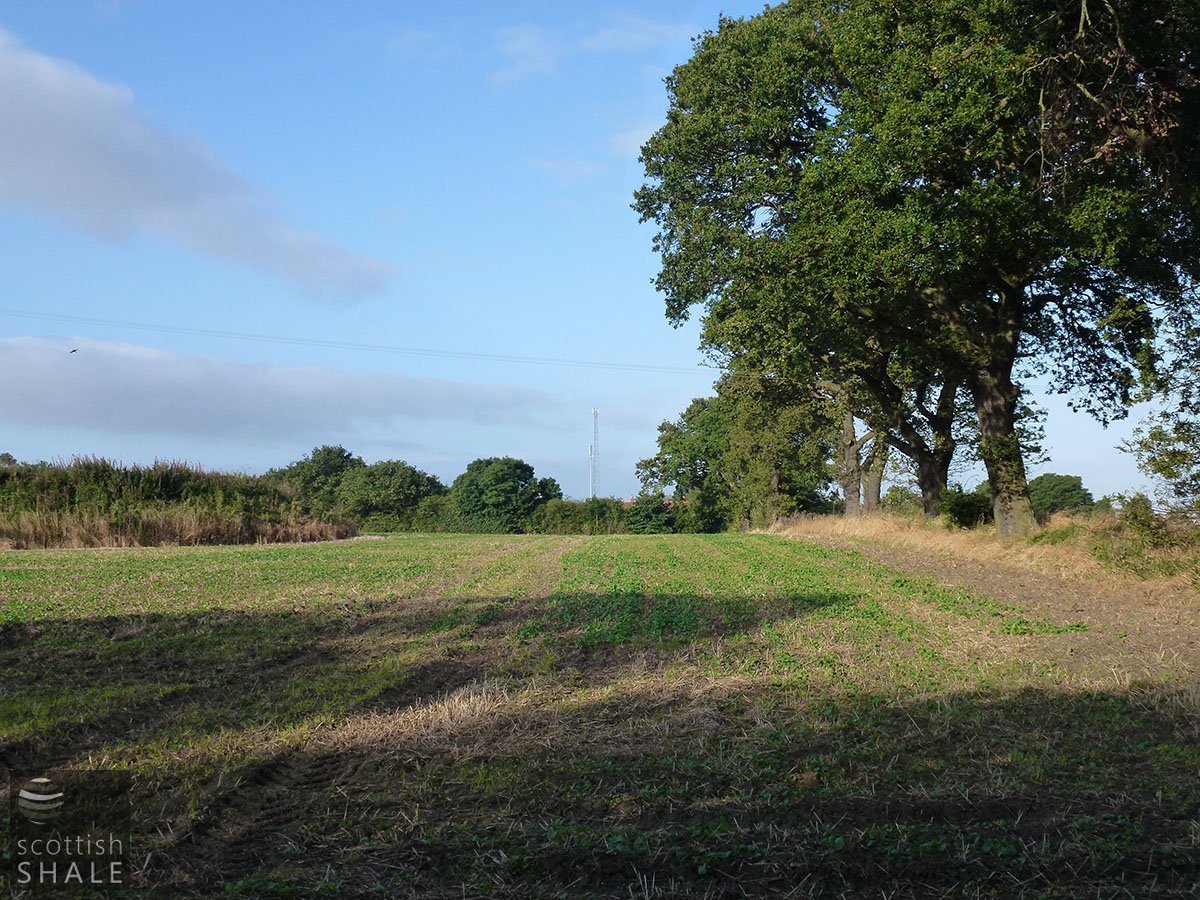 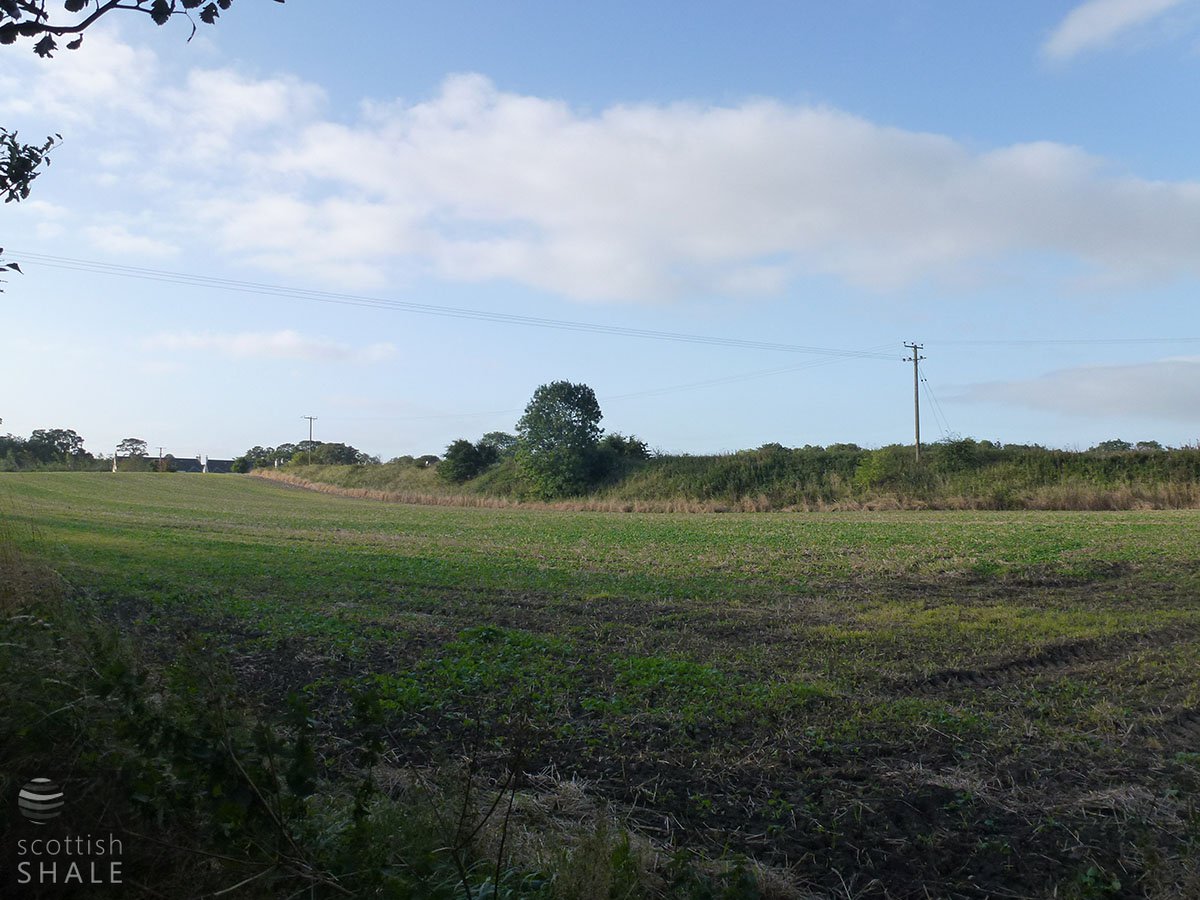 For some years preliminary works in connection with the opening of a new shale field have been actively pushed forward at Dalmeny Oil Works on the estate of Lord Rosebery. The original field, worked for so long by the company, had become exhausted, so far as profitable working was concerned, and an elaborate system of mineral boring was undertaken in order to definitely locate seams of shale known to lie in the neighbourhood. The operations were mainly to the north of the present workings, and eventually disclosed the existence of large deposits of the mineral, of varying quality, in the basin extending to the shores of the Firth of Forth and in the direction of South Queensferry, passing, of course, under the North British Railway line, leading to the Forth Bridge approaches. An attempt was at first made to tap the seams from a point in close proximity to the railway, but, after a considerable amount of expense had been incurred, the scheme was found unsuitable, and the partly constructed mine was dismantled and abandoned. The promoters then entered upon the work of opening up new ground. Having obtained the consent of the County Council, an open cast, afterwards covered by heavy iron beams, was run from the Dalmeny Oilworks through the west end of Dalmeny village, under the public road, emerging again in the open to the north in the vicinity of Dalmeny passenger station. Here, immediately to the east of the cottages, two mines have been driven,and already, at about 160 feet, after cutting through the upper lying mineral, which is of practically no value, the first signs of having reached the stratum of oil-bearing mineral have appeared. This is understood to be what is known as the "Barracks" seam, but immediately below a second seam is sought, while still further down the famous Broxburn seam lies. To be in accordance with the regulations for mining under Board of Trade rules, the plan first proposed was one under which the inlet would be large enough to permit a central wall being run, in order to divide the mine into two parts, and so provide for an efficient in flow of pure air, and an outlet for the foul air. Under the present plan two mines have been opened, their openings being close together, but in order to reach the mineral as soon as possible, the gradients have necessarily been made exceptionally steep – in one the dip is 1 foot in 1.5. Though the approach waggon ways have an advanced stage of completion, it is expected that about six months may elapse before the mine is in full working order.

MATCHES IN DALMENY FIERY MINE

At Linlithgow Sheriff Court yesterday, John Lafferty, miners' drawer, South Queensferry, was fined £3 for having had in his possession three lucifer matches in Rosshill shale mine, Dalmeny, which was an underground working in which safety lamps were used. Charles Houston, miners' drawer, Church Row, Dalmeny, pleaded guilty to a similar offence in regard to one match. A fine of £1 was imposed in this case.

A PIPE IN A SHALE MINE

At Linlithgow Sheriff Court on Tuesday - before Sheriff Macleod - Angus M'Kay, a mioner residing at 16 Railway Row, Dalmeny, was fined £1 for a contravention of the Coal Mines Act, 1911, by having had a pipe in his possession on 14th July on Rosehall [sic.] Shale Mine, Dalmeny.

Mr Fraser reported that great difficulties had been experienced in working the shale at Rosshill Mine....which had led to reduced output and consequently high cost of the shale supplied from there to the works at Dalmeny, and that he therefore proposed to close the mine. For some time past a proportion of the shale heated in the Company's works had come from Youngs Company's Ingliston Pit.

Coal Authority Mine Abandonment Catalogue No. 7237, showing workings in the Upper, Mid and Lower Shales from Rosshill No. 1 & 2, abandoned in 1921.