A substantial crude oil works exploiting local oil-shales. Less than two years after construction of the oil works, a public limited company (The Dalmeny Oil Company Ltd) was formed to take over the interests of the business. A close working relationship later developed with the Oakbank Oil Company Ltd, who refined much of Dalmeny's crude, and ultimately owned the majority of the company's shares. Following the formation of Scottish Oils Ltd, much of the shale produced at the Ingliston pits were transported to Dalmeny for retorting.

Redwood commented "This company has been a phenomenal success, and as it has always been a crude oil work only, and has not had any special advantages as regards shale fields, &c., it points to the fact that there is not much profit in refining unless done on a sufficiently large scale; and if some of the other ventures had followed the Dalmeny Company's example, and stuck to the crude oil business and left the refining to those more capable of doing it, it would have been better for all concerned." 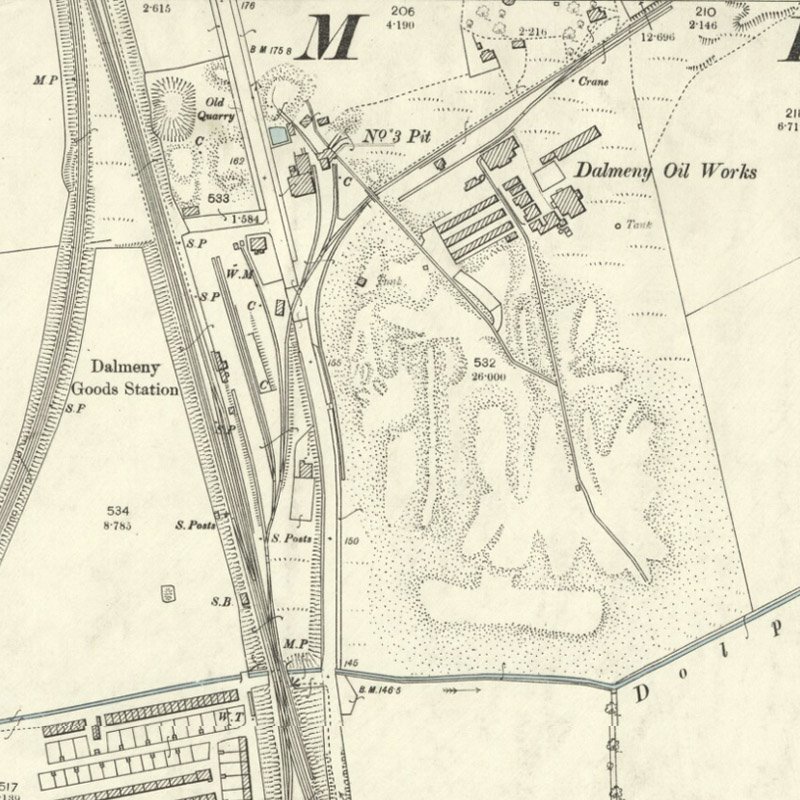 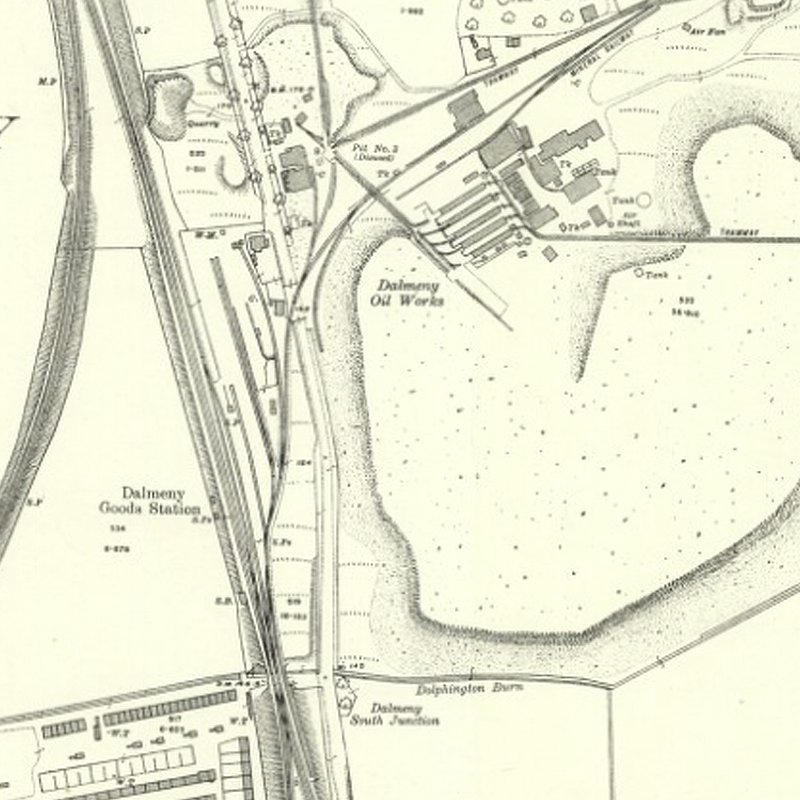 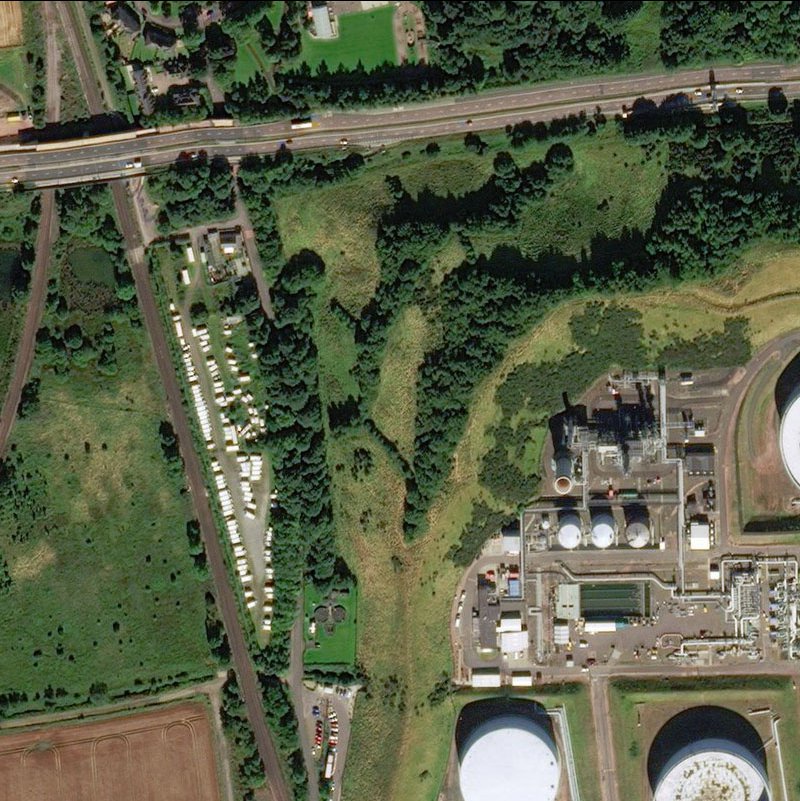 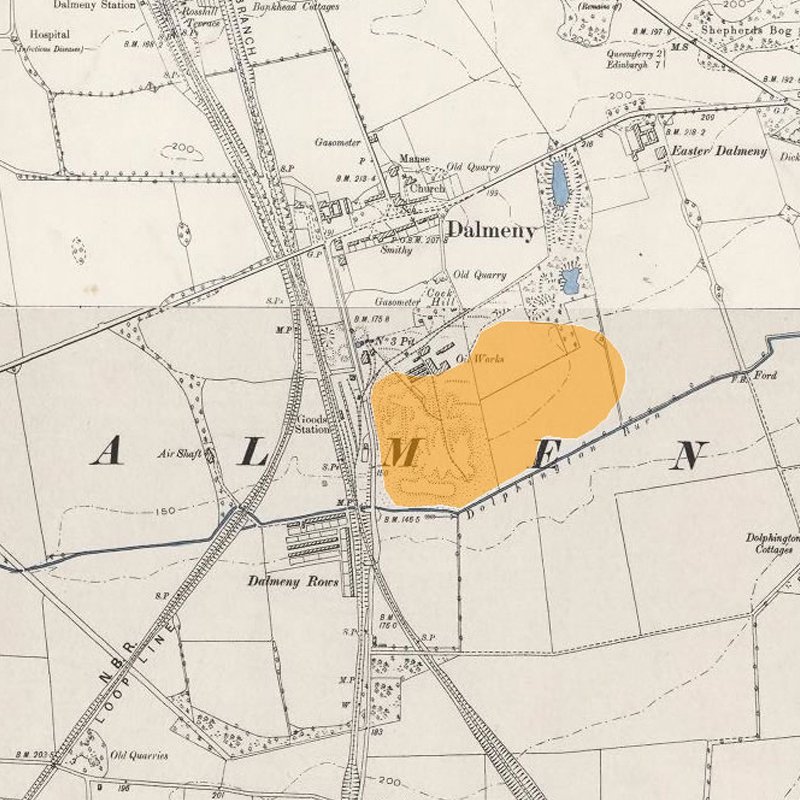 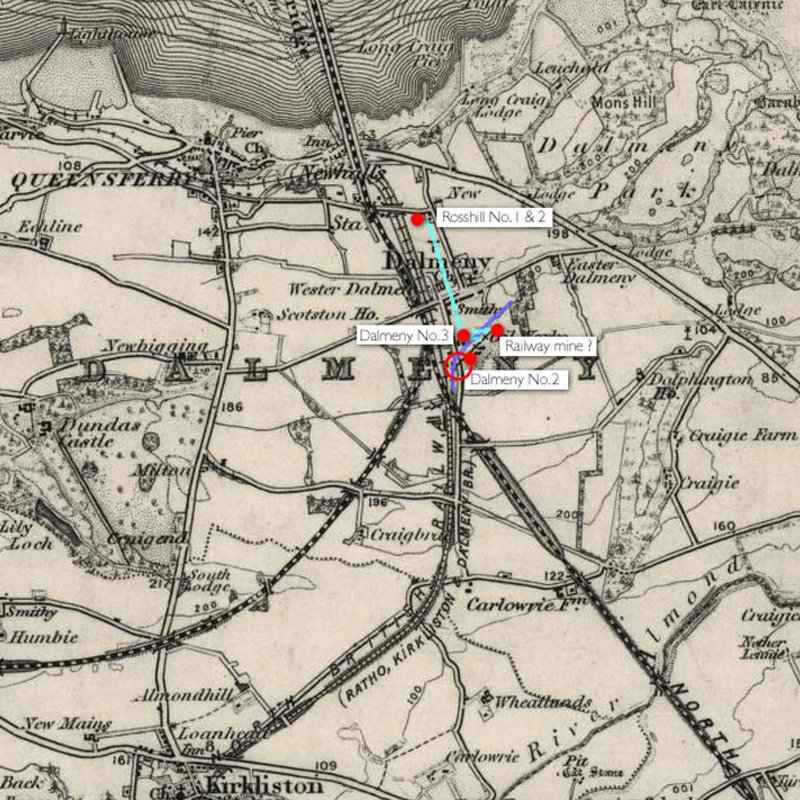 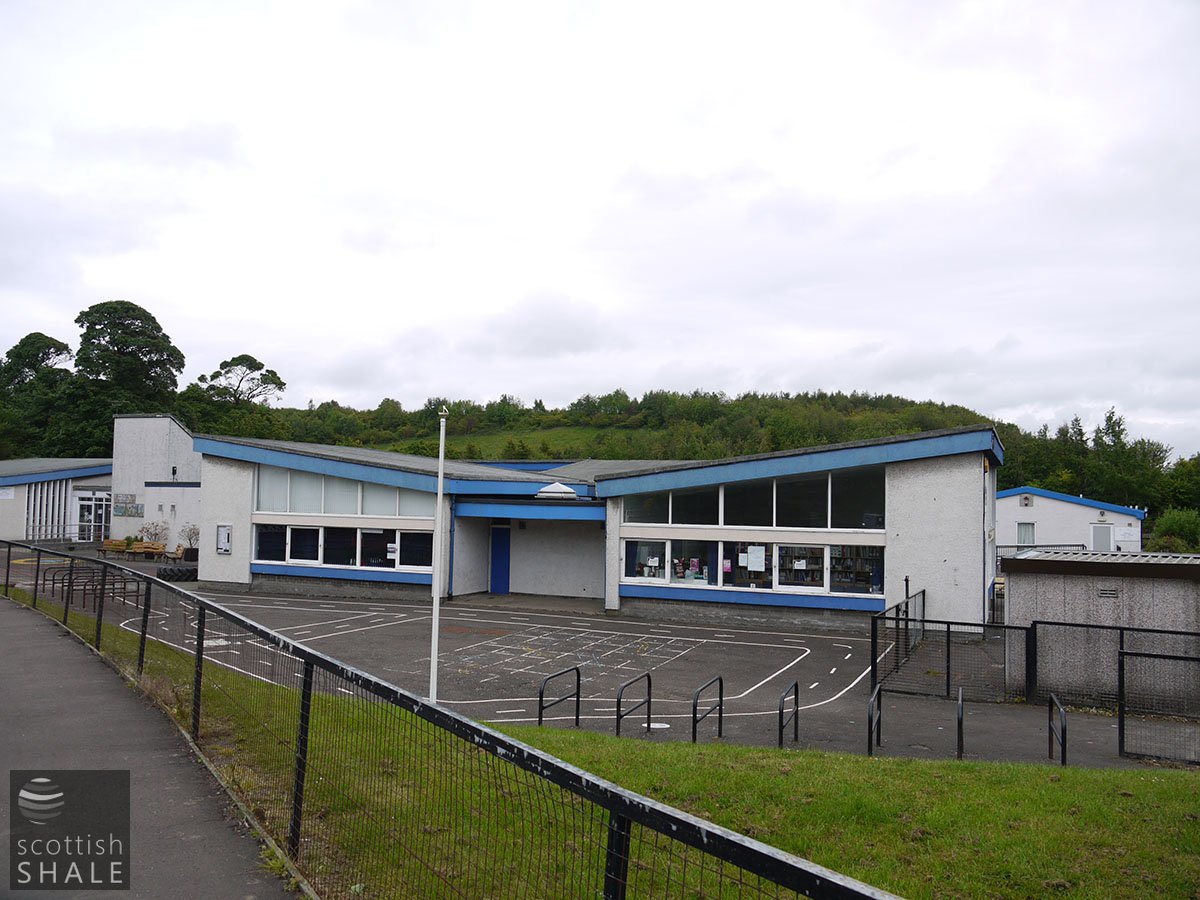 The oil works site lies between Dalmeny nursery school and the greened bing on the horizon, immediately south of the M90. Looking south. June 2011. 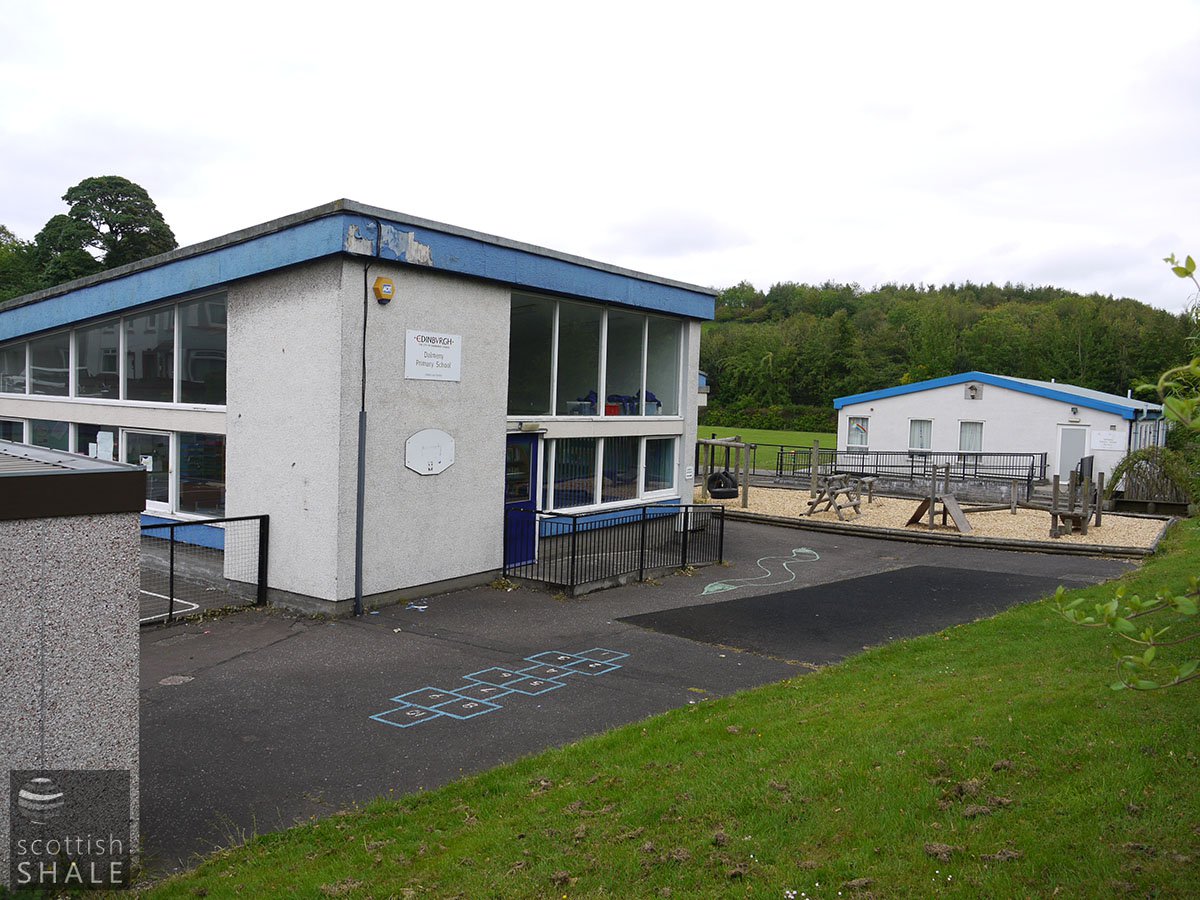 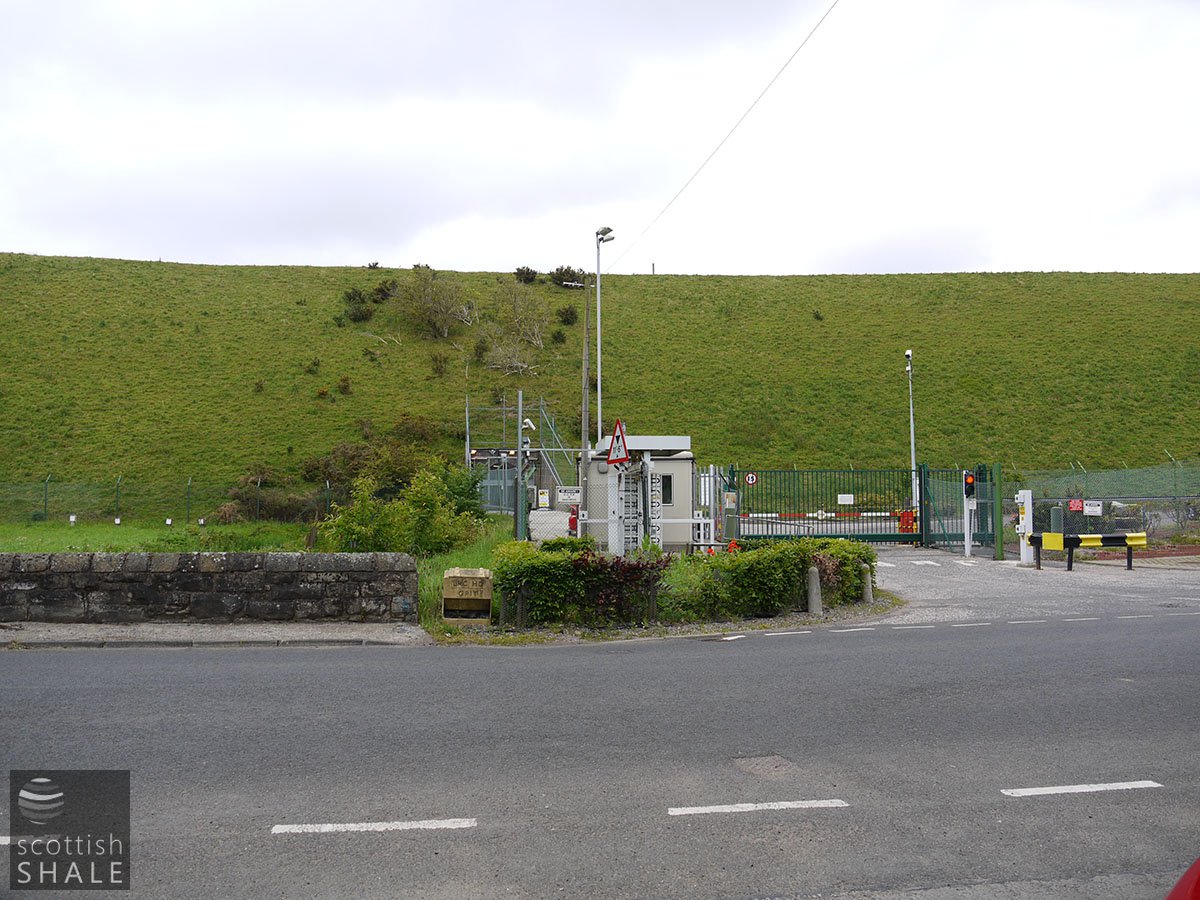 This COMPANY is being formed for the purpose of acquiring the DALMENY SHALE and OIL WORKS, near Queensferry, with the lease of shale and other minerals in part of the DALMENY ESTATE of the EARL OF ROSEBERRY. The mineral field is intersected by the Queensferry Branch of the North British Railway Company, and the works connected with that branch by a short line of private railway. The extent and contents of the mineral field have been amply proved by mineral workings and by boring. The mining machinery has been completed so as to admit of an output of 200 tons of shale per day, and by a little further expenditure, this can be easily increased. The Oil Works were erected within the last eighteen months and having been gradually extended during that time as the commercial value of the undertaking was proved. They contain 33 upright and 44 horizontal retorts with relative machinery and plant. A relatively small proportion of additional expense will increase the Oil Works, so as to use the output available from the mining plant.

Prospectus in The Scotsman, 2nd October 1871

Our works are situated on the Dolphington Burn, a tributary of the Water of Leith. Employ 141 hands. Rateable value of works, 600/. The bed of the stream has not silted up. Our works are not affected by floods. There has been no alteration in the condition of the stream above our works within our knowledge. It is not polluted by works above, nor by mines. Obtain supply of water pumped from our pits, and consume yearly 1 5,000,000 gallons. Use yearly bituminous shale, 30,000 tons, and sulphuric or other acid, 100 tons. Produce yearly, crude oil, 950,000 gallons, and sulphate of ammonia, 100 tons. The waste liquid produced at our works flows into the burn. Produce yearly about 24,000 tons of solid refuse shale, which is accumulated in large heaps around the works, and used sometimes for repairing roads. Use steam, 80 nominal horse-power. Consume nearly 7,000 tons of coal the ashes from which are used to repair roads and footpaths. The excrements of our workpeople, mixed with ashes, are removed periodically by farmers, and used for manure. Have no suggestions to offer as to the best means of avoiding pollution in future, or as to the conservancy of rivers and streams.