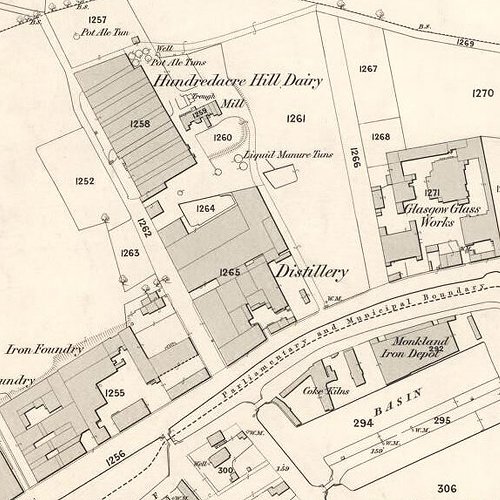 Redwood noted that Vulcan Works, Port Dundas, were active between 1864 and 1866.

The available evidence suggests that Robinson, Donald & Co., and their successors J & E Robinson refined paraffin oils on this site, most likely using crude oil from Loanhead (Glentore) Oil Works. The companies also seem to have had a minor interest in Avonhead Oil Works and Port Dundas Oil Works.

Directory entries list the address of Vulcan Oil Works as "Canal-bank", and the newspaper account of a fire (see "snippets") places the works on the north side of the canal. It seems probable therefore that the works fronted onto North Canal Bank Street and Vulcan Street. 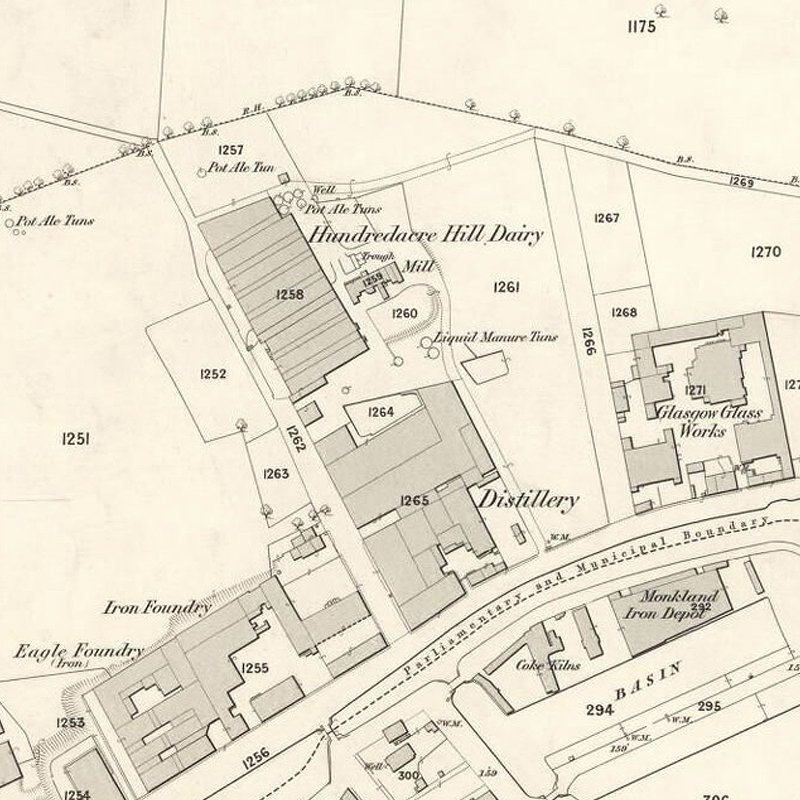 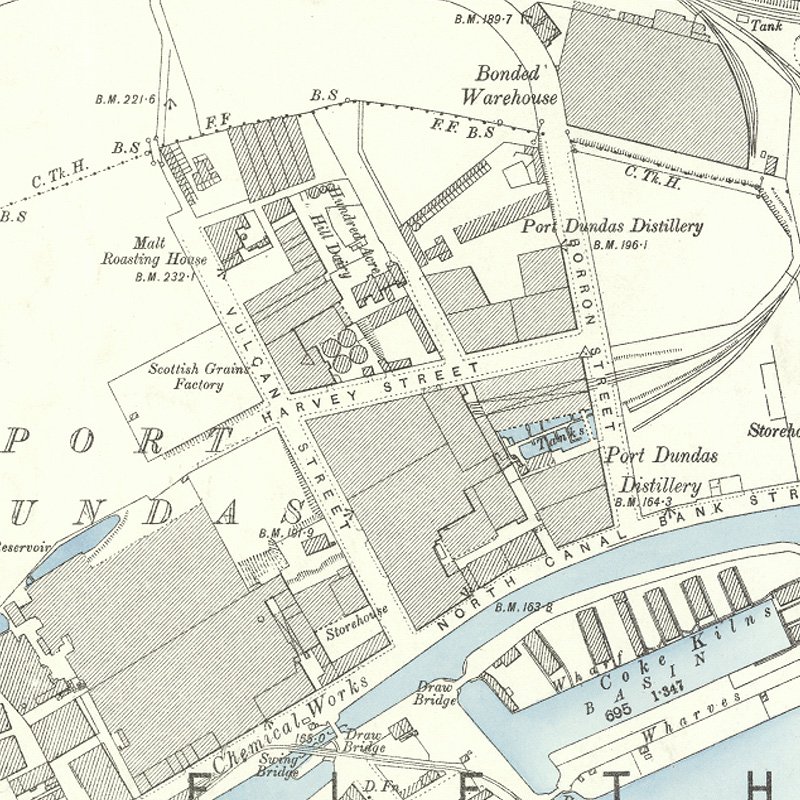 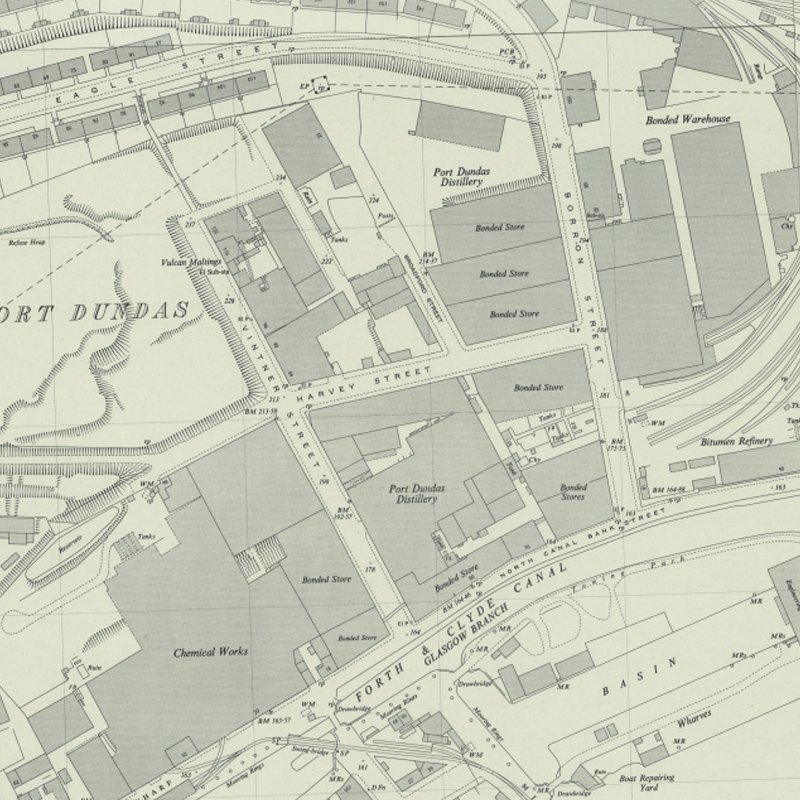 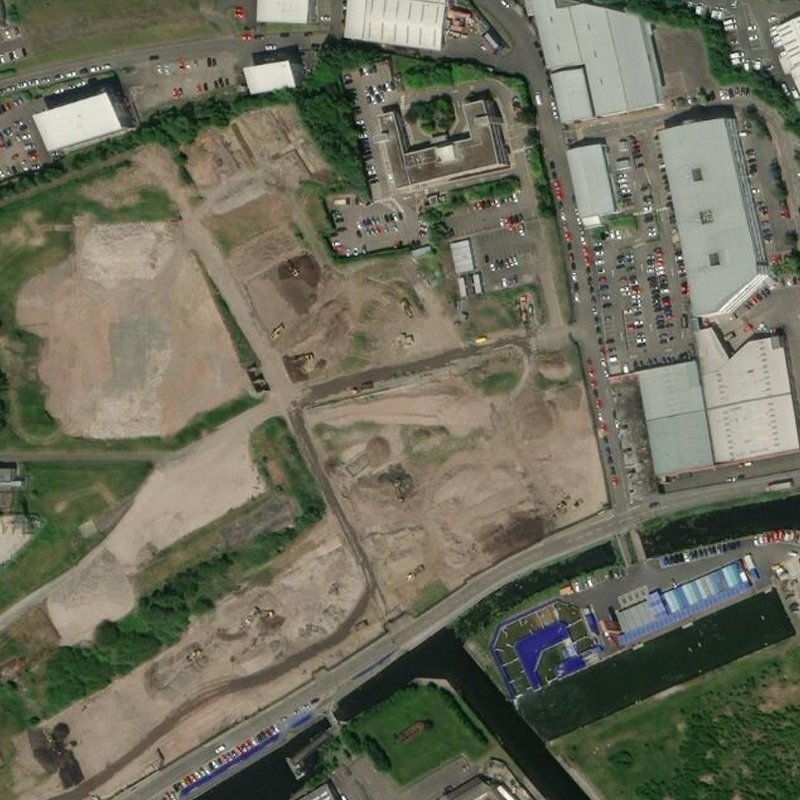 Between six and seven o'clock yesterday evening, fire was discovered to have broken out in the Vulcan Oil Works, Port Dundas, belonging to Messrs J. & E. Robinson, paraffin oil manufacturers. The works, which are on the north side of the canal and beyond the municipal bounds, occupy about an acre of ground; and the fire originated in a large "treating" shed to the north, which was completely consumed. A crude oil store and a cooperage, both placed behind the shed, were also entirely destroyed. The Northern Brigade, and a portion of the Central Brigade under Mr Bryson, were upon the spot, and through their exertions the conflagration was confined to the parts of the premises we have mentioned. The main building, containing the store, offices, workmen's houses, stables, &c., was saved, as well as a large tank containing a quantity of oil, which was situated to the north. For a time the fire had a very alarming appearance, and the glare which it produced was seen from considerable distances. The damage is estimated at about £2000, and is covered by insurance.

FOR SALE, BY PRIVATE BARGAIN, - UNRESTRICTED GROUND AND BUILDINGS AT PORT-DUNDAS , The VULCAN OILWORKS, situated on the North Bank of the Canal, presently occupied by J. & E. Robinson. The Subjects contain about 4910 Square Yards, having a Frontage to the Canal of 200 feet. They are within 15 minutes' walk of of the Royal Exchange, and are close to the North British Railway Company's Station at Port-Dundas, and within 10 minutes' walk of the Caledonian General Terminus. There is tank accommodation for about 200,000 Gallons, with pumping Engines and Cooperage. The Premises are not only well suited for Oil or other Public Works. but for Stores for Petroleum or General Goods, There is a plentiful supply of Water from the Canal and Loch Katrine. Offers for the Ground and Buildings only, or together with the Plant and Machinery, will be received by Messrs J. & E.. Robinson, at the Works; or by George Rennie, Writer, 38 George Street.