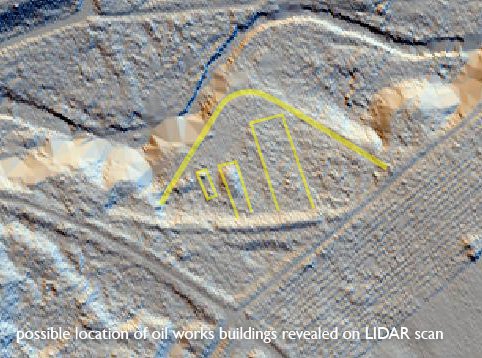 A substantial crude oil works, equipped with nine benches of horizontal retorts, two shale mines, worker's housing, offices, and a brickworks, representing an investment of almost £20,000. The oil company also constructed a railway siding from the Caledonian Railway's Cleland and Midcalder line, and owned a number of railway wagons for transporting their products.

The works were established by Matthew Dunnet, initially in partnership with James Ferrie and later with James Brown, trading as the East Hermand Shale Company. It appears that the company ran out of capital, and the partners were declared bankrupt in 1872. No buyers were found for the works, which appear to have been dismantled in about 1874, and the site reverted back to Thomas and James Thornton, who retained the mineral lease of the Hermand estate.

It is possible that some brickworks plant remained on site, as bricks were produced at East Hermand from at least the 1880's until at 1915 . Between the 1880's until about 1900, sandstone was quarried to the south west of the oil works site where the Dunnet shale had earlier been mined, producing an excellent quality building stone, was used in some of Edinburgh's finest buildings, including the Royal Museum of Scotland.

Hermand brickworks were advertised for sale, as a going concern producing 10,000 bricks per day, by proprietor John B Walker in Glasgow Herald 28th April 1886. See also Dunnet's mine, East Hermand.

No maps of the oil works are known to survive. The second edition OS map, surveyed in 1895, show an industrial landscape that had changed considerably over the twenty years or so since East Hermand oil works were demolished. This map shows a triangular arrangement of railway lines. It might be imagine that the top part of this triangle represents the original railway siding serving the oil works. A line heading south from this siding may have been installed to serve the Hermand sandstone quarry which is thought to have opened in the early 1880. Trains would need to pull into the headshunt and then reverse direction to descend the gradient into the quarry. The third side of the triangle curved southwards towards pits in the Hermand estate opened prior to 1883, serving the Hermand brickworks en-route.

This subsequent development may have obscured many remaining traces of the oil works. Much of the spent shale bing of the oilworks remains beneath a covering of vegetation, with red blaes exposed on steeper slopes. This bing merges into tips of waste excavated from the quarry to the south. The most likely site for the oil works lies on flat ground between the railway siding and burn. Two short lines on the 1895 map perhaps represent a low retaining wall. Although invisible beneath dense vegetation, LIDAR reveals some faint rectangular forms in this area, perhaps the traces of oil works building.

Offices and fourteen houses were constructed along with the works. A flat area that remains between the bing and the burn seems the most suitable location for these buildings. 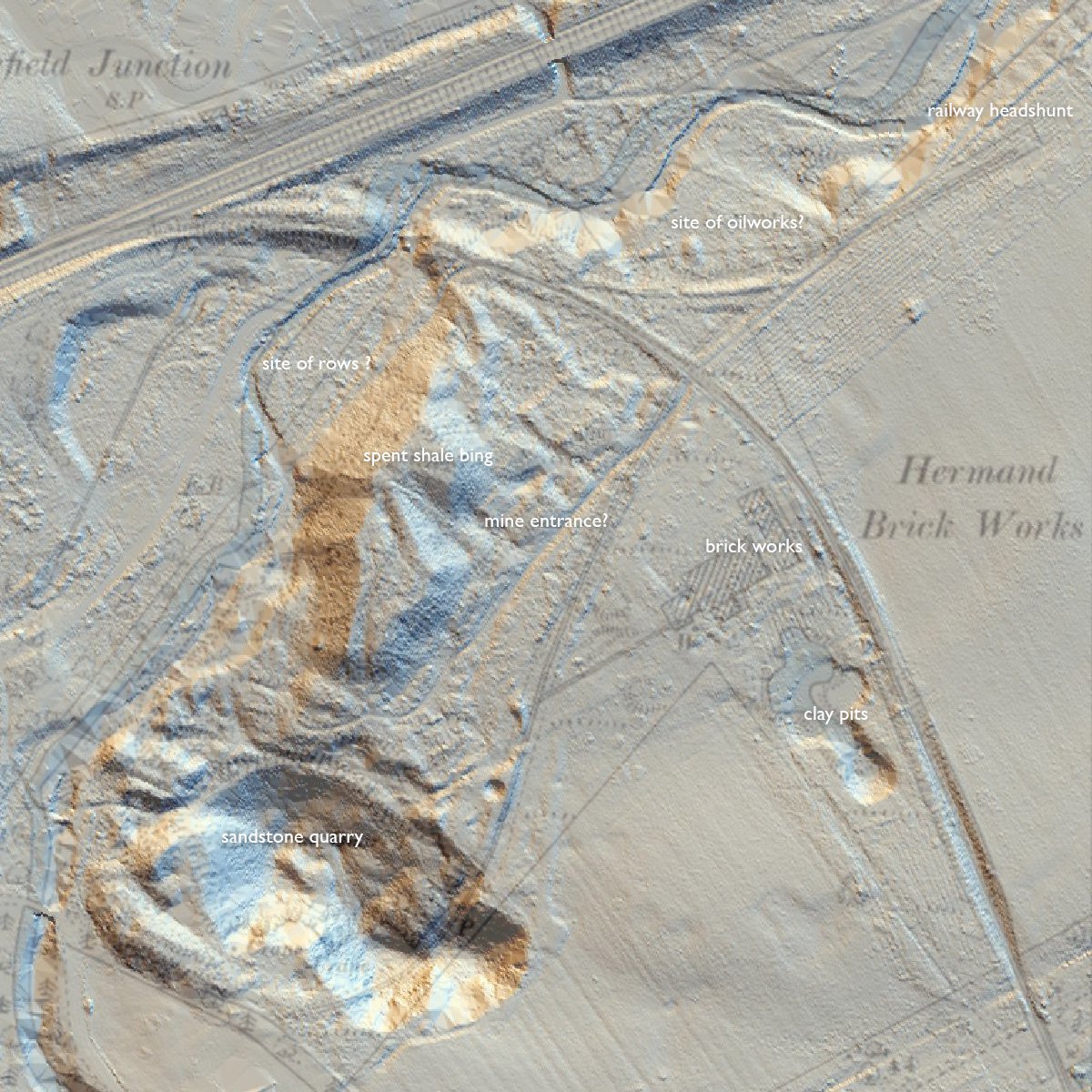 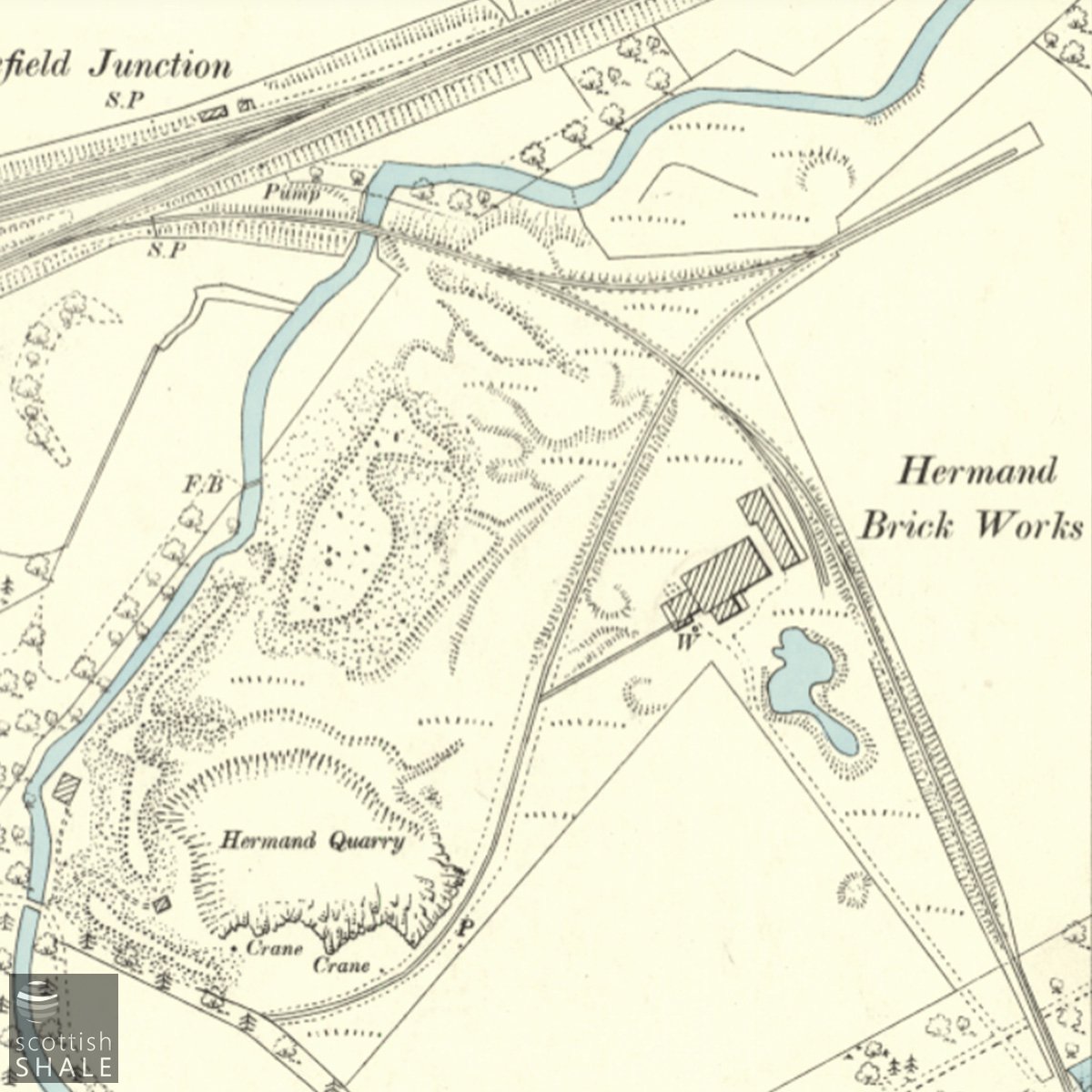 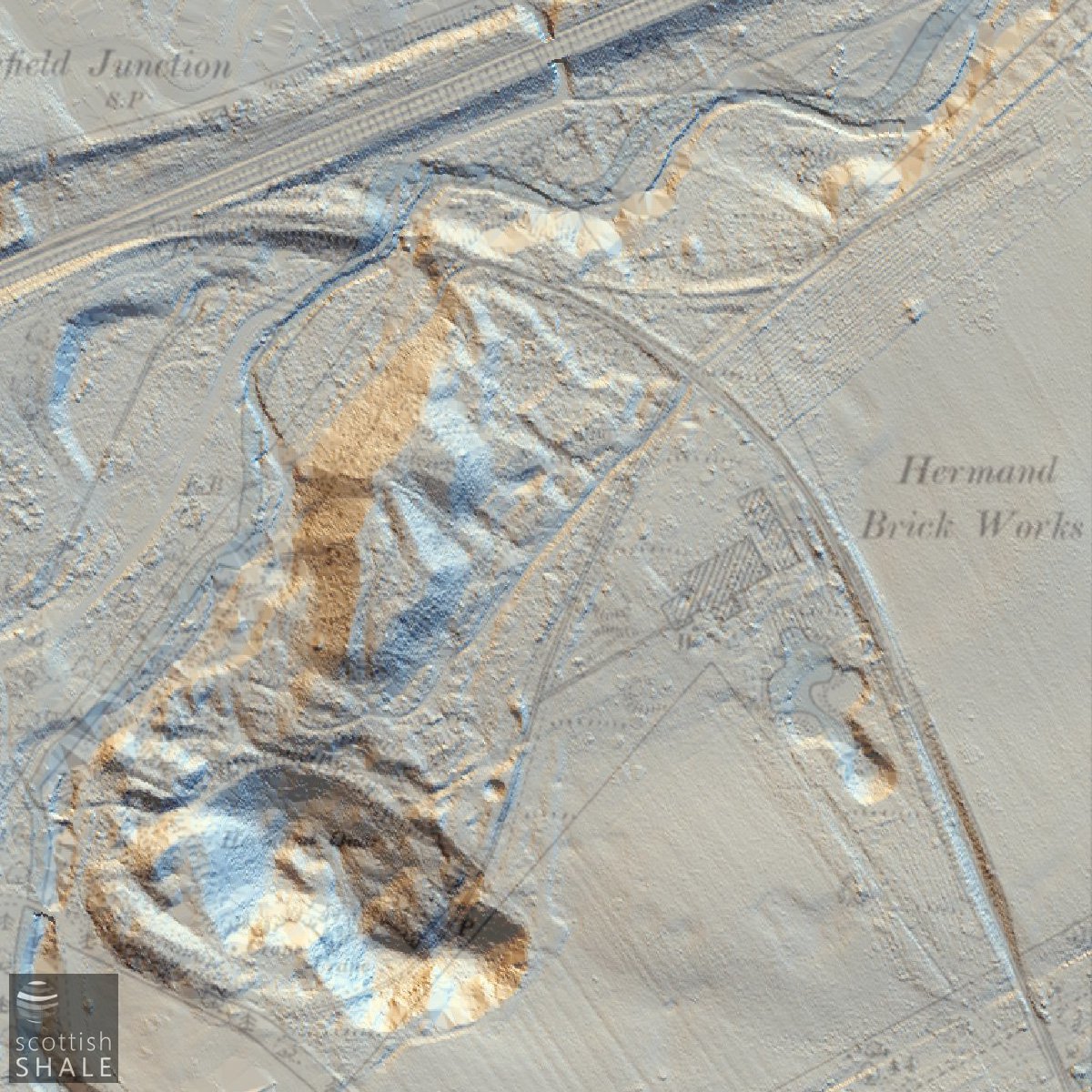 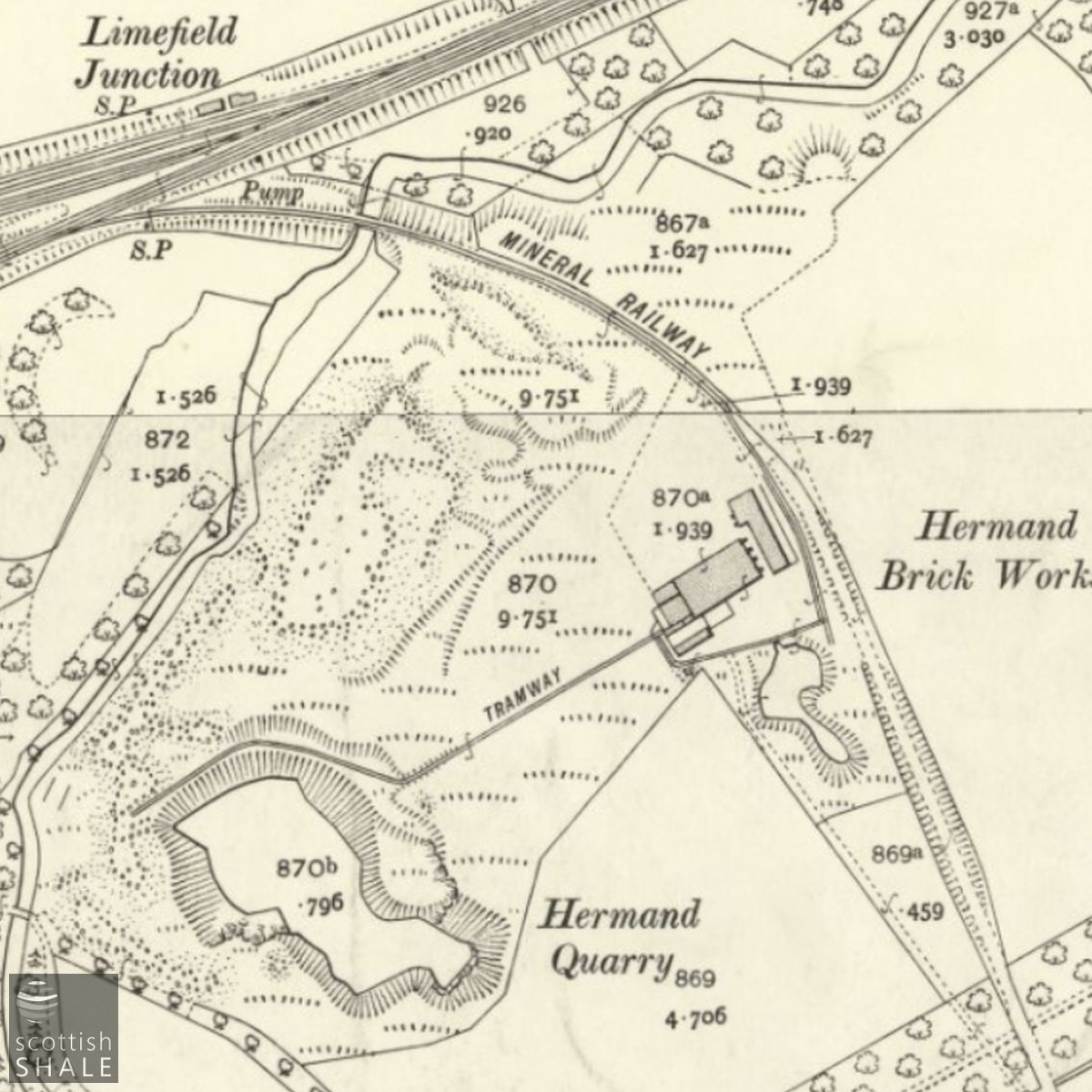 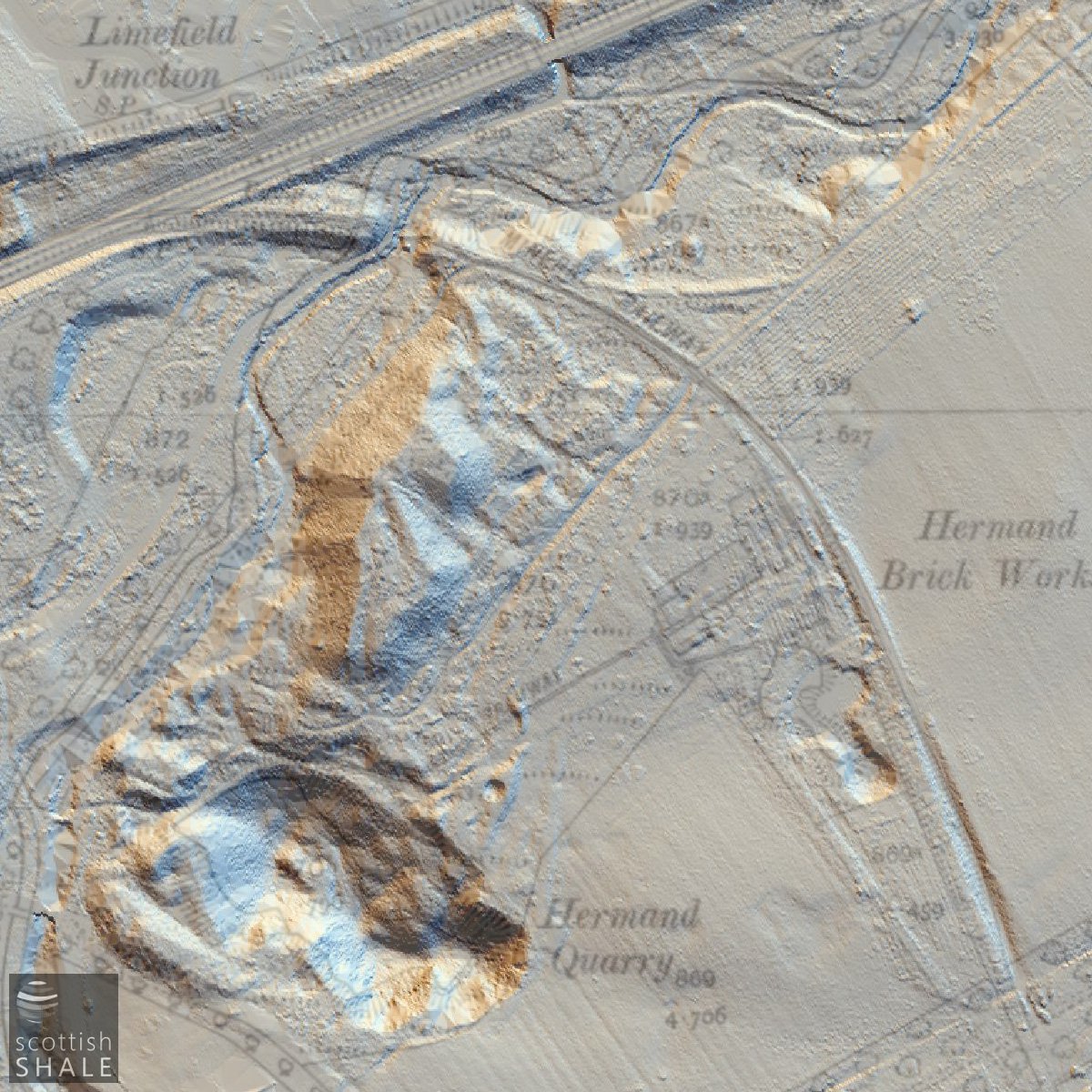 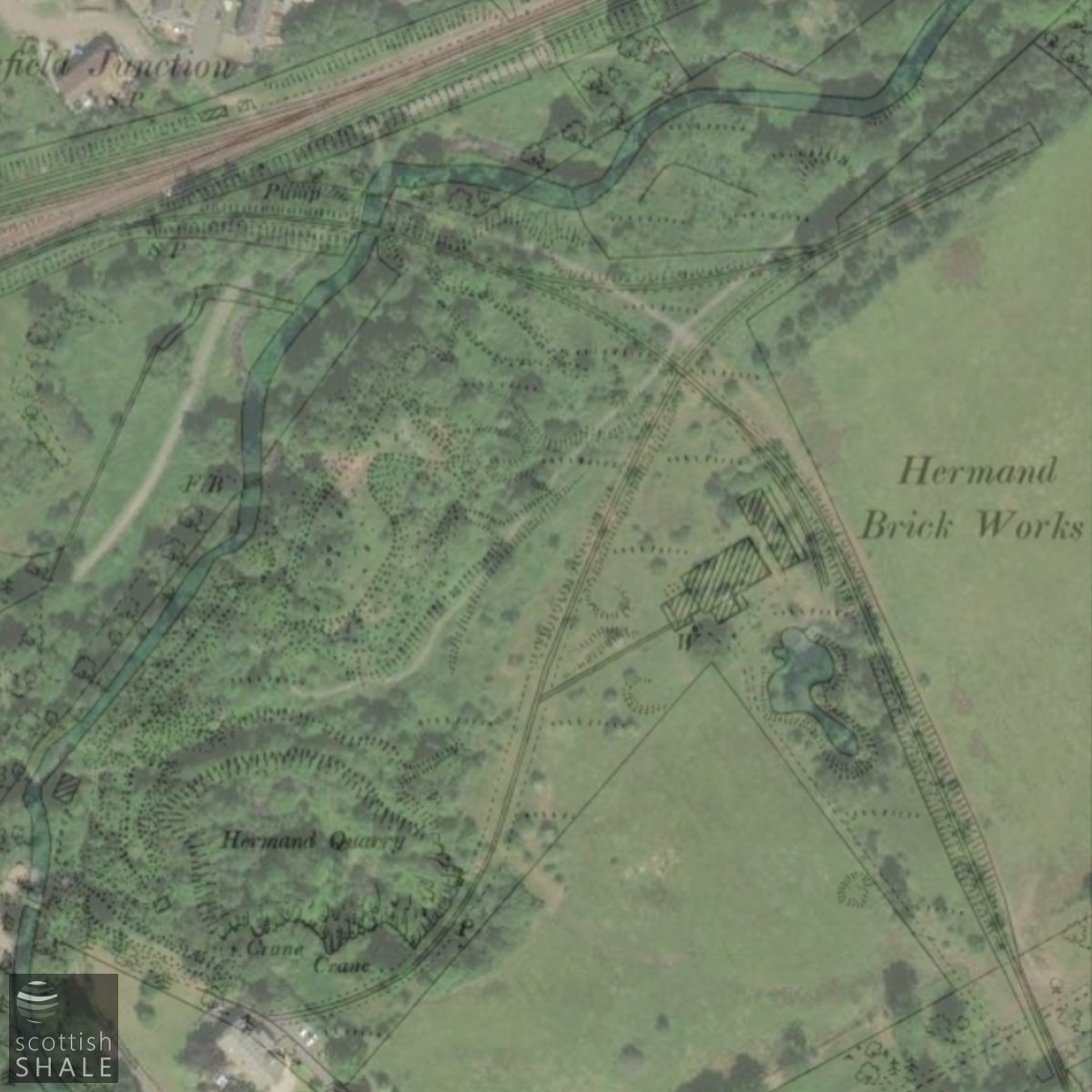 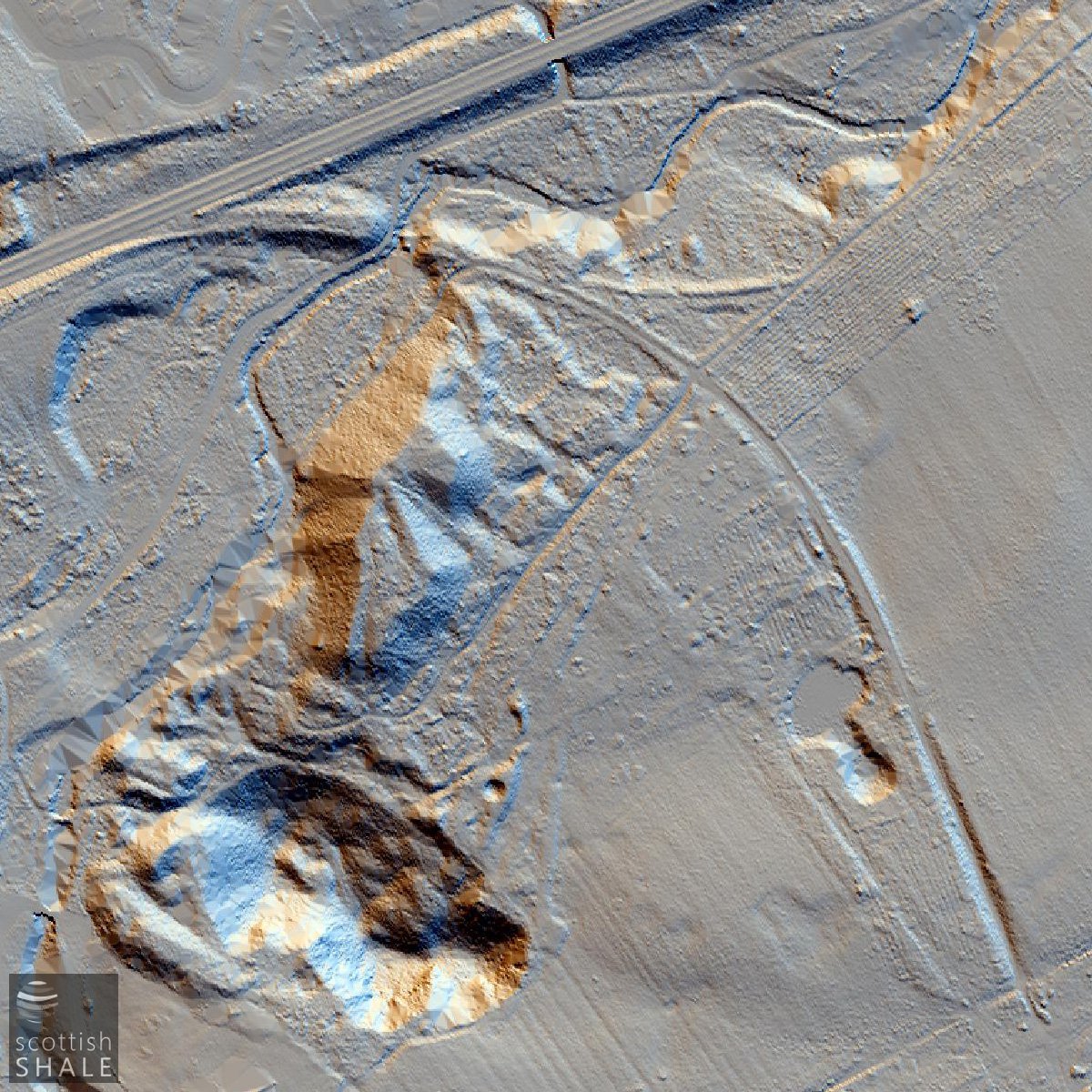 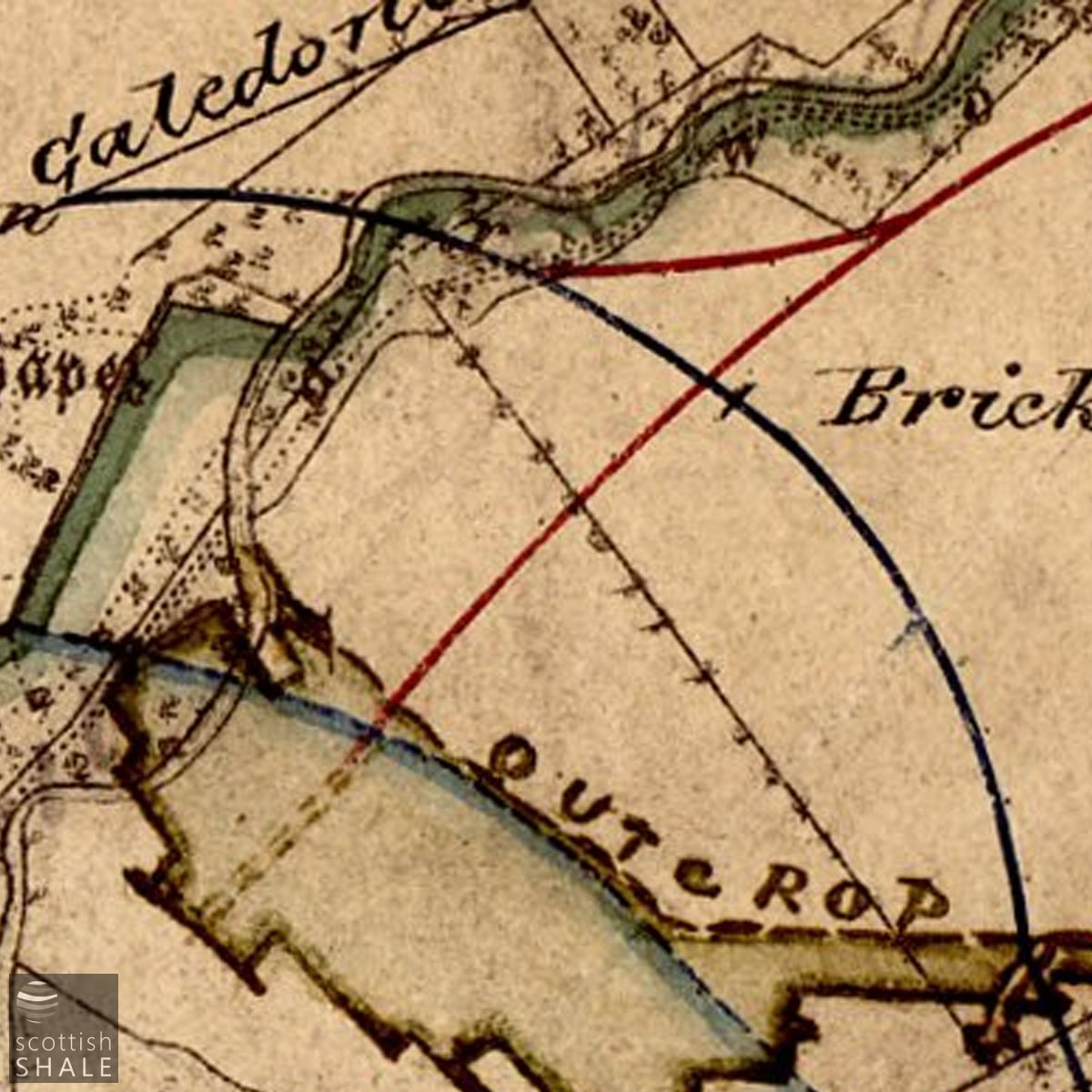 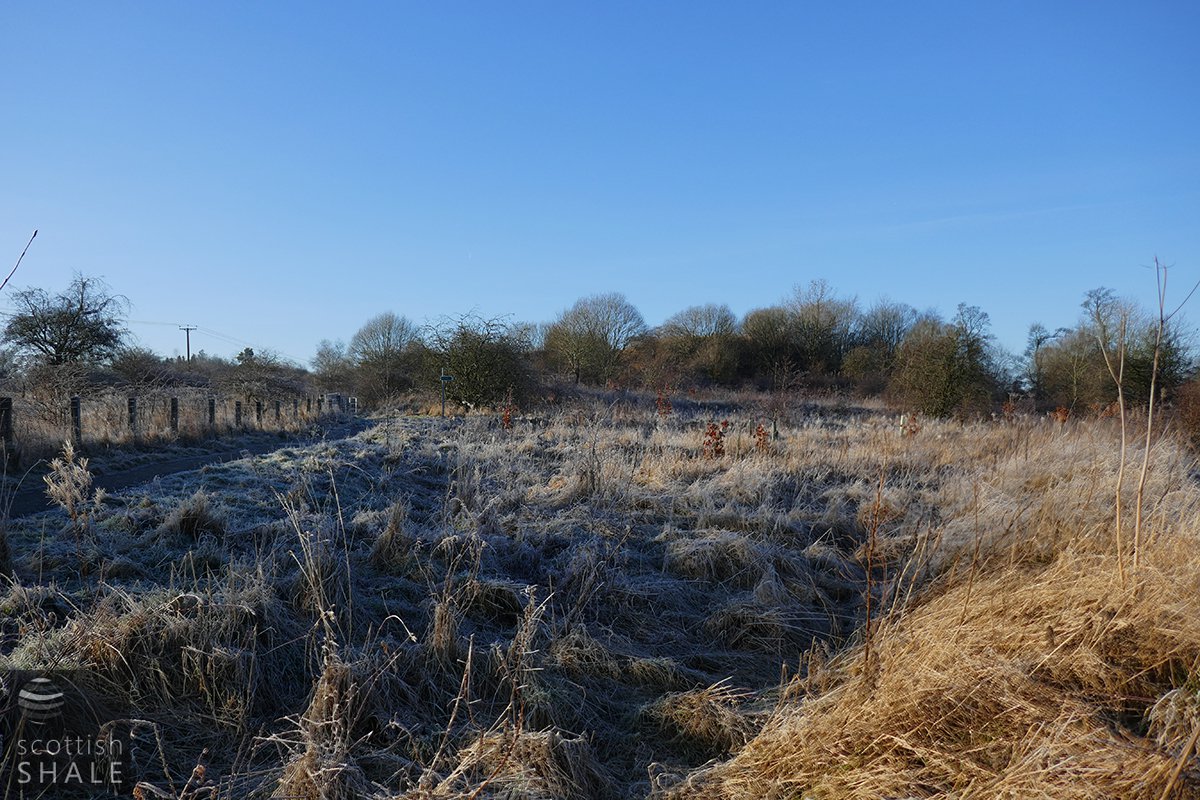 View across presumed oil works site, with bing on the horizon. Pathway (left) and bank ( far right) mark the routes of sidings which meet in a headshunt behind the viewer. Looking south west. January 2017. 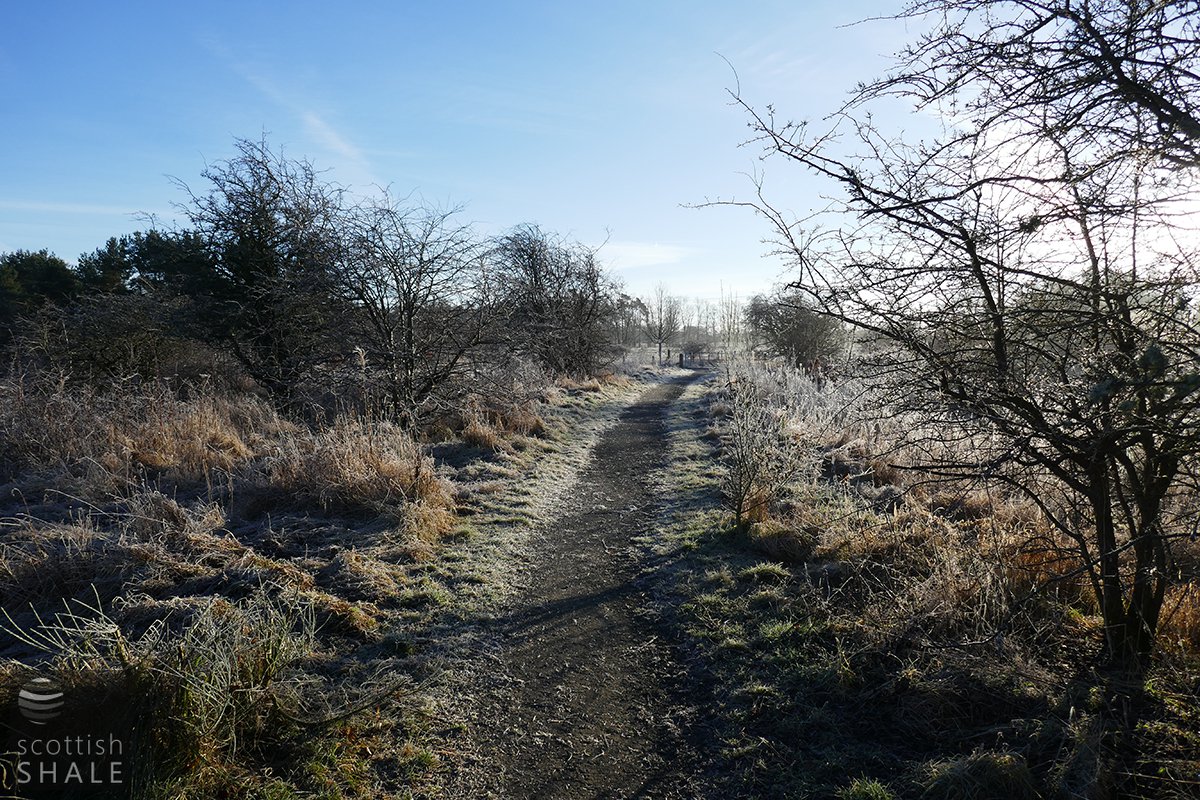 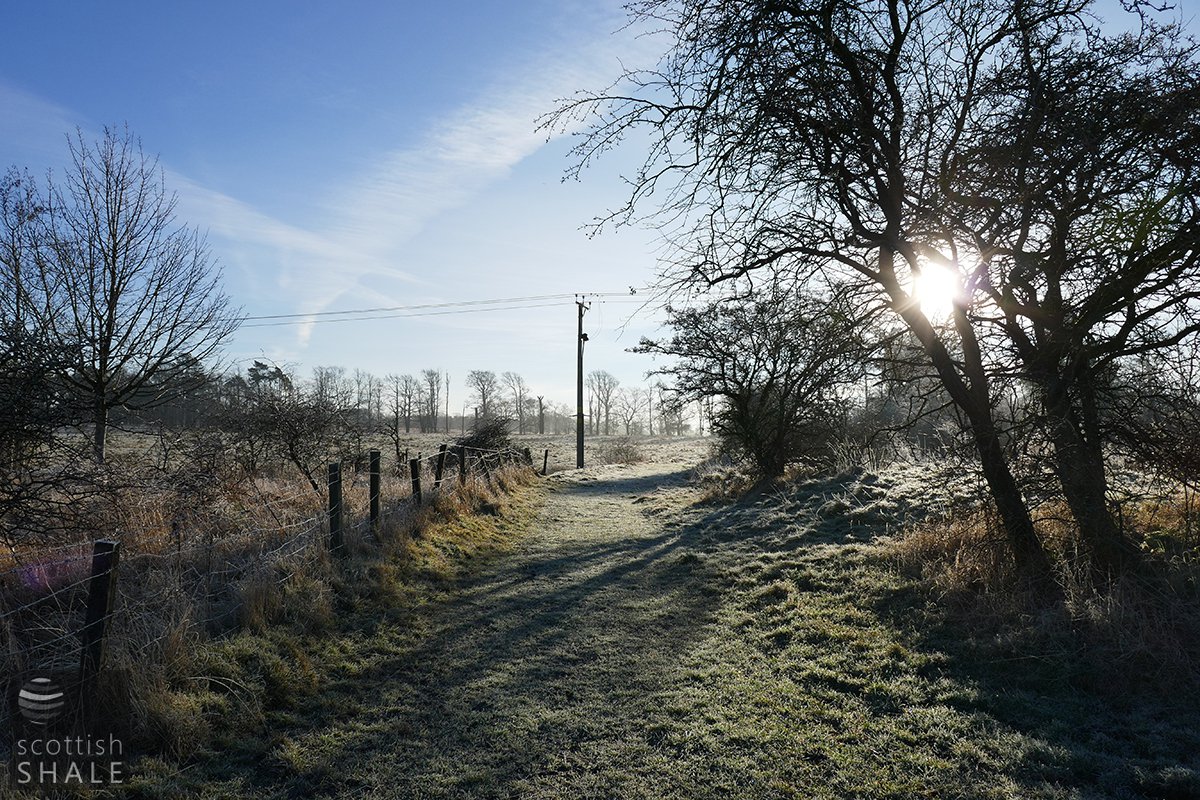 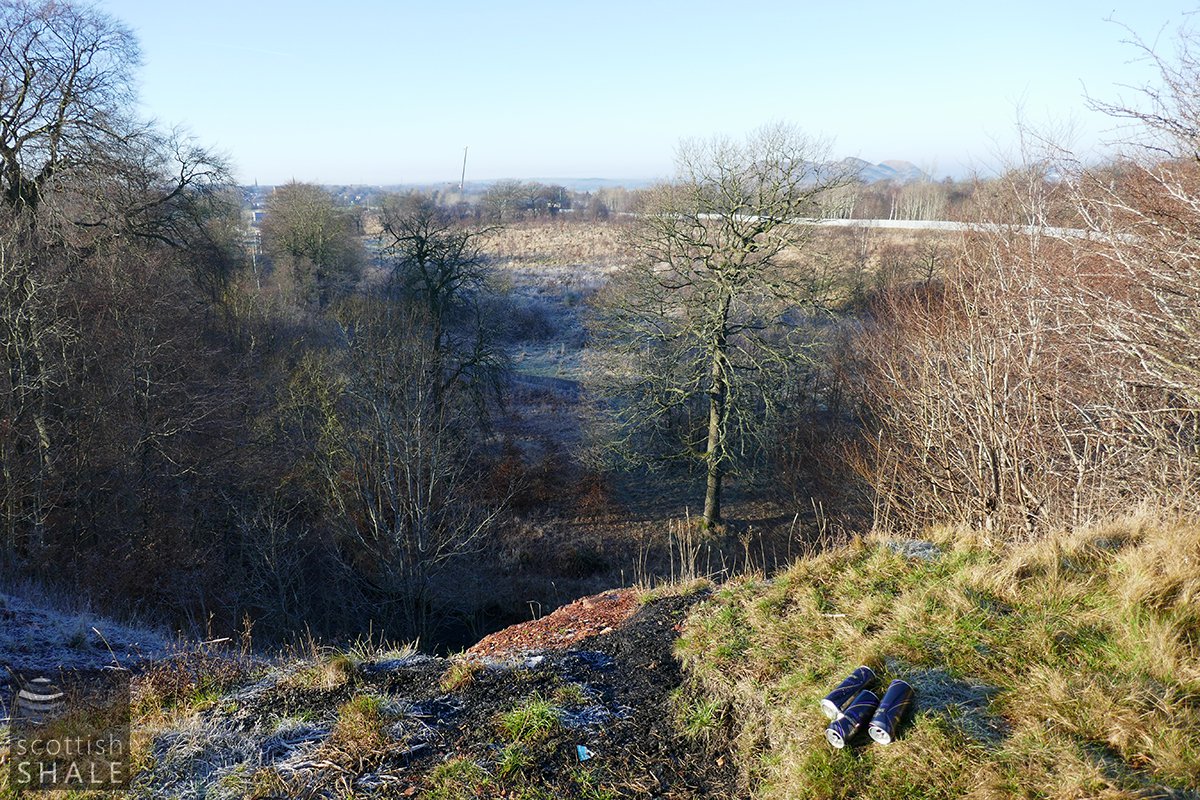 View from crest of the bing, looking towards West Calder. Looking west. January 2017. 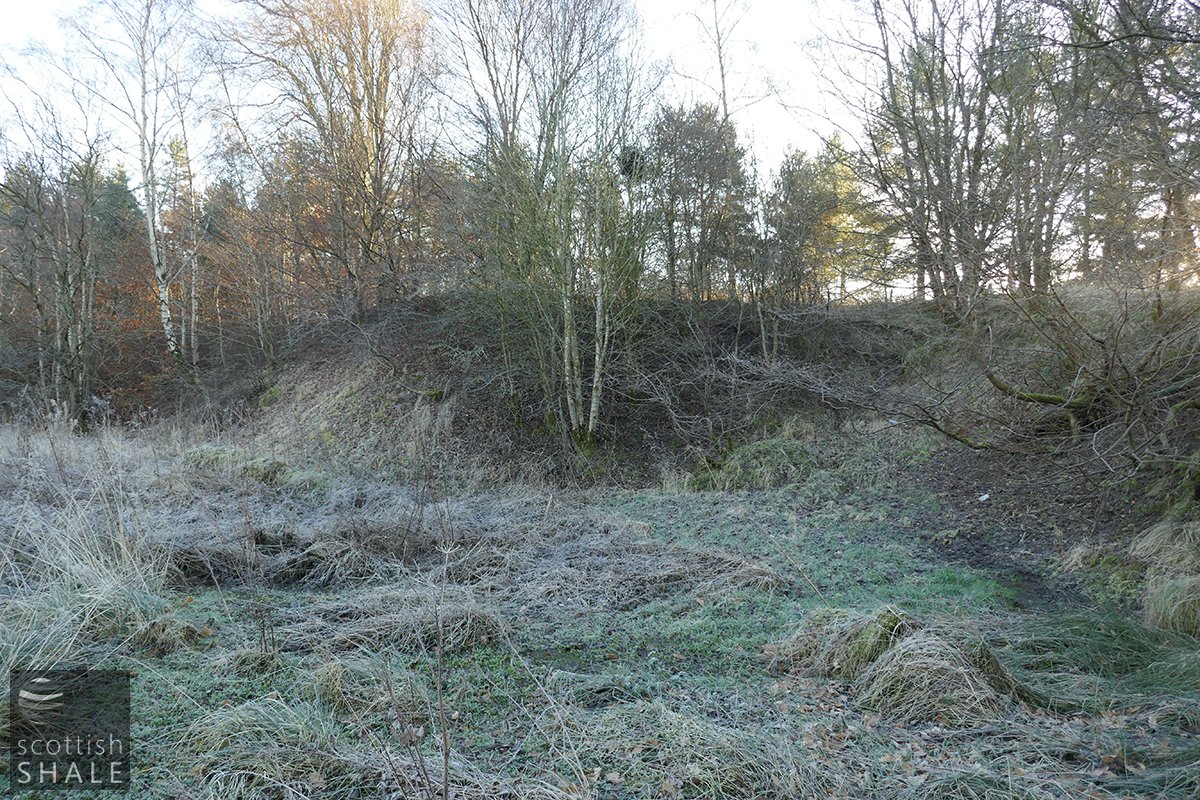 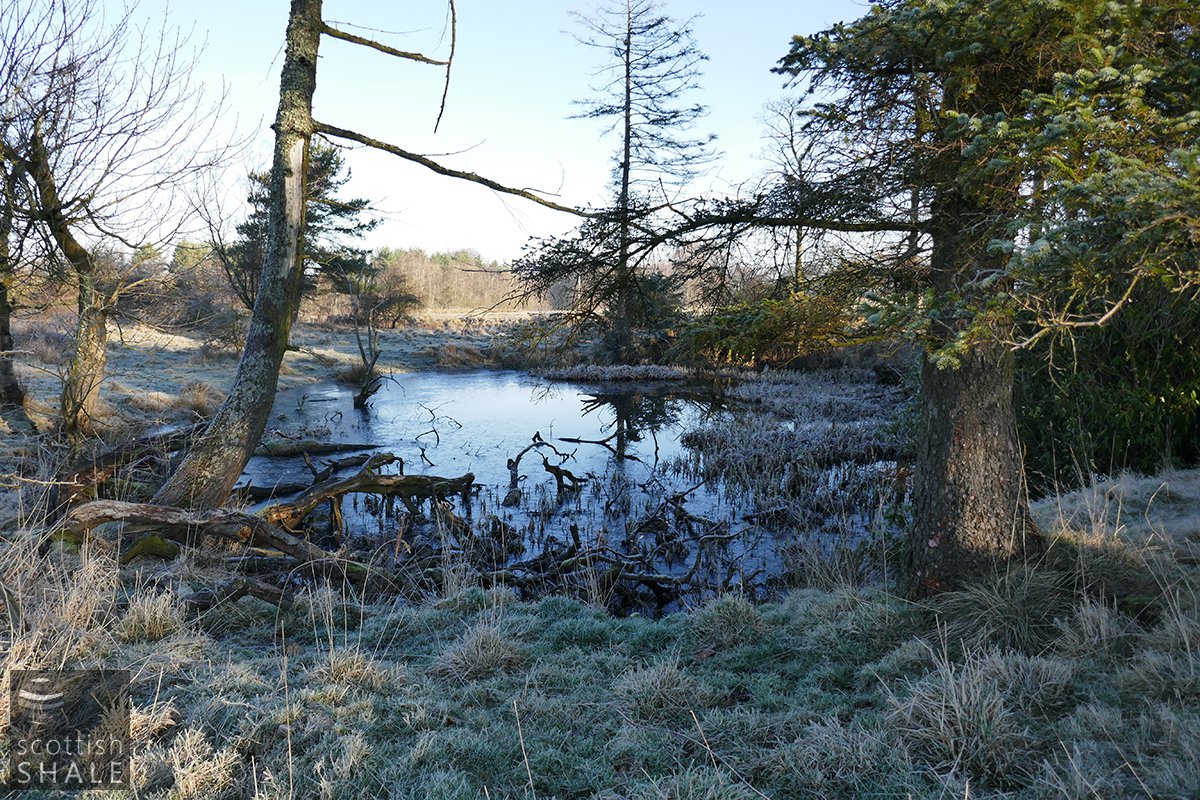 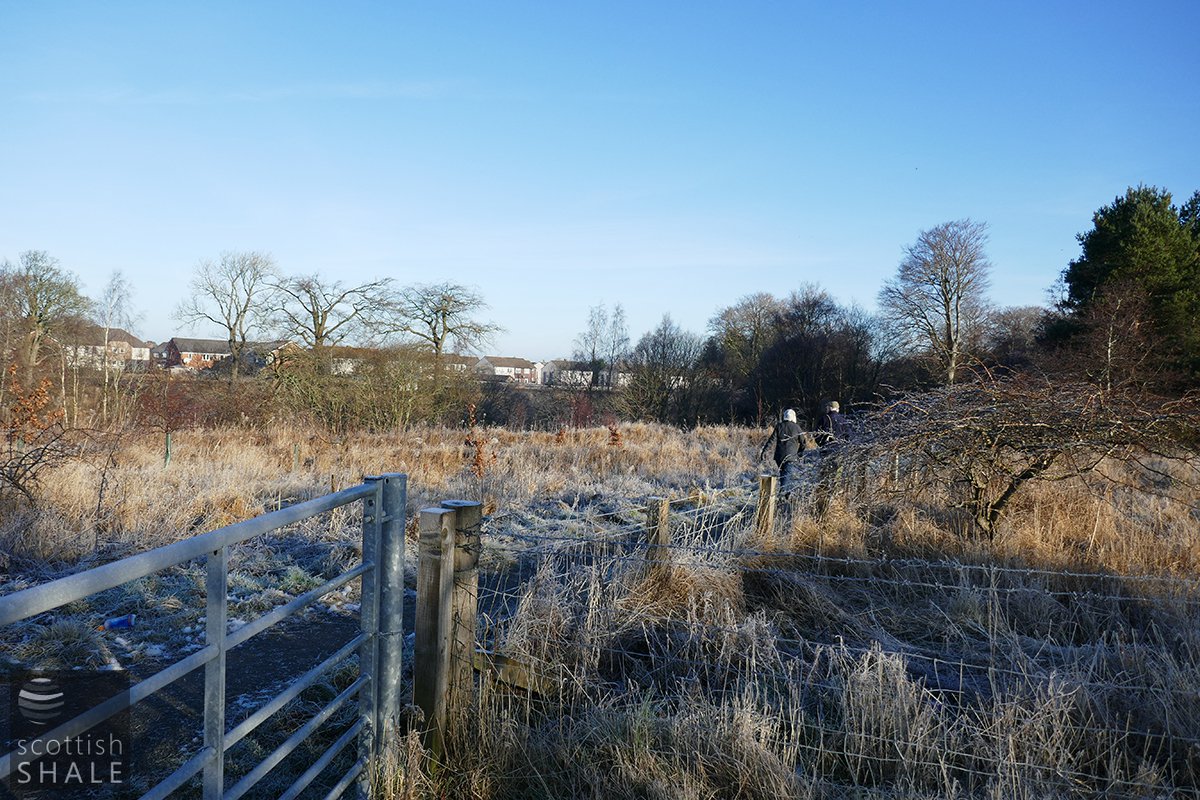 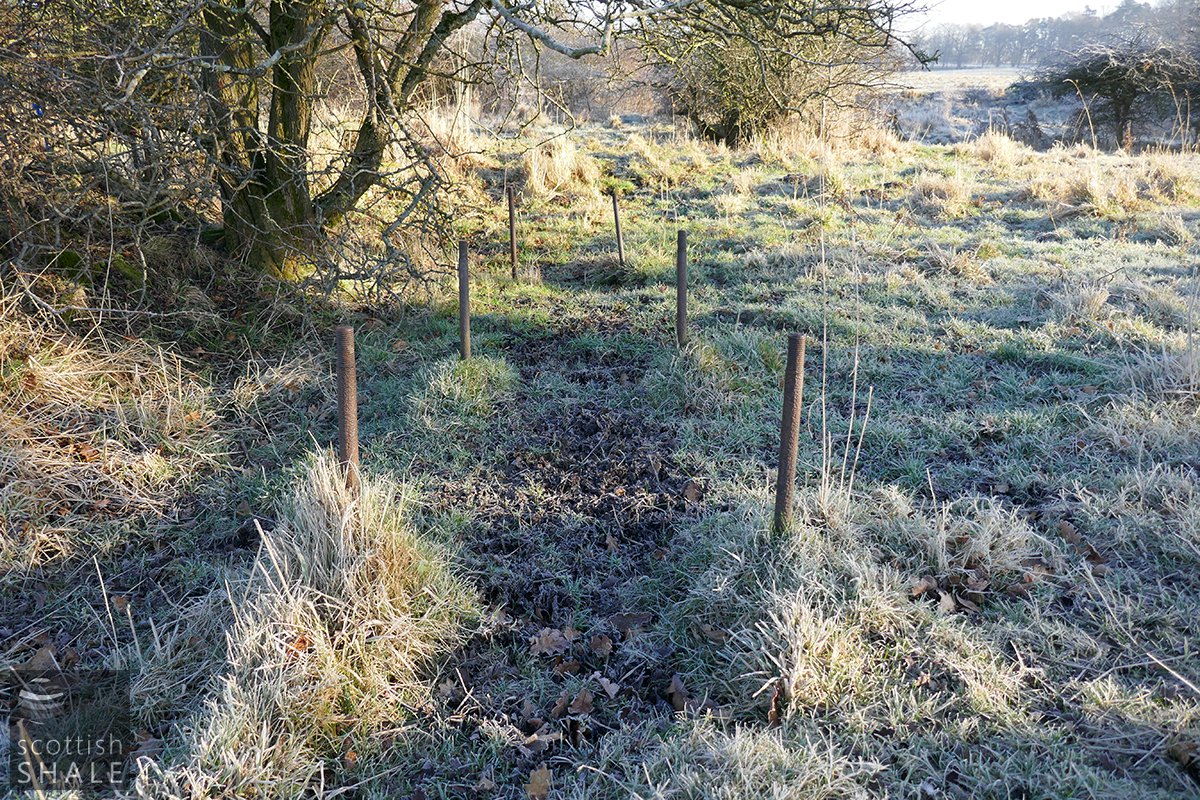 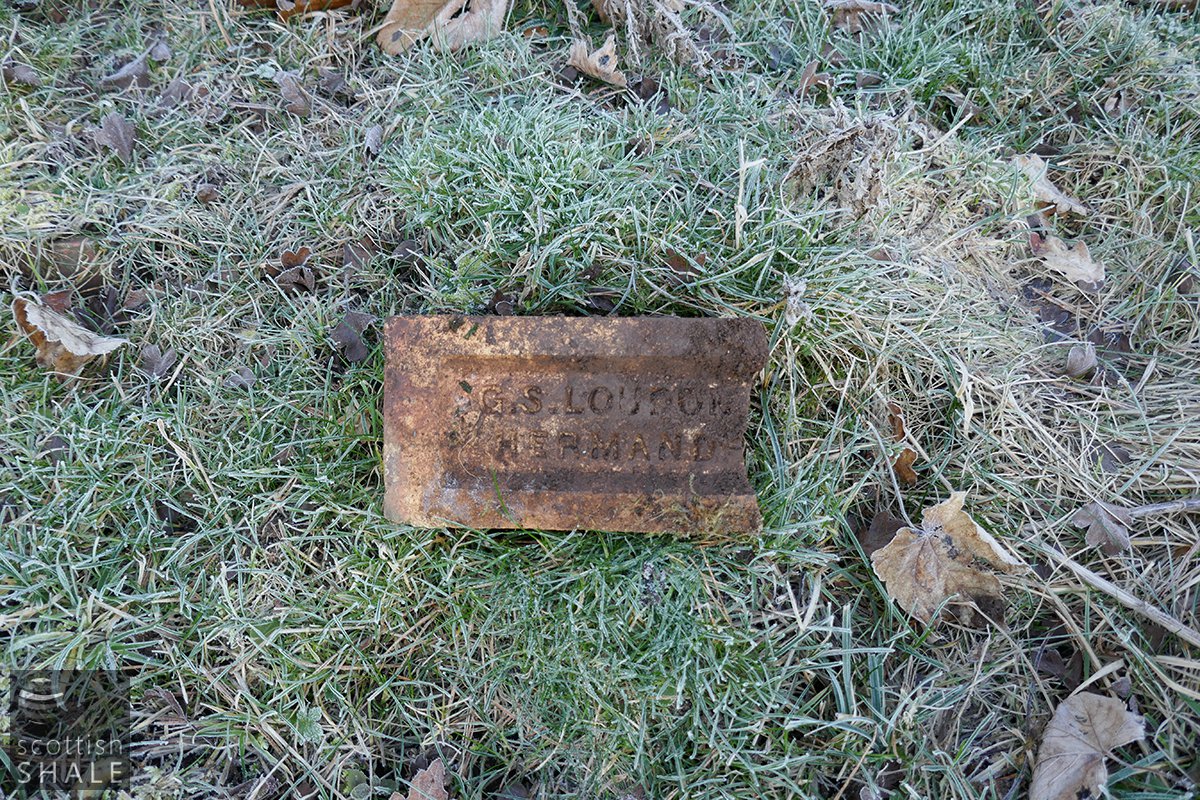 Brick exposed in the undergrowth. January 2017.

To be SOLD by PUBLIC ROUP, within Dowell's Salerooms, 18 George Street, Edinburgh, on Wednesday, the 4th December next at Two o'clock Afternoon.

The SUB-LEASE of the MINERALS lying under the EASTERN PORTION of the LANDS of HERMAND, extending to about 250 acres or thereby, and belonging to the EAST HERMAND SHALE COMPANY, of which 25 years are still to run, with the whole Works, Plant, and Machinery belonging to the Company. The Works, which have been erected within the last five years, at a cost of nearly £20,000 are upon the most approved principle, and are fully equipped with all the necessary apparatus for the manufacture of Crude Oil and Sulphate of Ammonia. They embrace –

There is also a Level Railway Siding and Branches, connecting the Works with the Cleland and Mid-Calder Line of the Caledonian Railway, the Works being within a mile of West-Calder Station.

The examination in bankruptcy of Matthew Dunnet and James Mungo Brown, individual partners of the East Hermand Shale Company, West Calder, was made on Thursday, in Edinburgh, before Sheriff Hamilton ……. Dunnet, after being sworn, deponed "ln 1866 I began business in the manufacture of crude oil from shale in partnership with James Ferrie. We took the sub-lease from Messrs Thomson (sic, Thornton?) of the East Hermand shale field in July 1866. The duration of the lease was thirty-one years from May of that year, and the rent was payable either m fixed rents or in lordships at the option of the proprietor. My capital consisted of sums borrowed from my friends. I had capital under the contract with Mr Ferrie was £1000, his being £2000. In consequence of Mr Ferrie not putting in the capital stipulated, the partnership was dissolved in December 1866. Up to that time we had been going on with the erection of the works. For the next twelve months I continued erecting the works and developing the shale fields on my own account, and in December 1867 I arranged with Mr J. M. Brown to join me as at lst January 1868. He was to furnish £2500, and I was to furnish £2000 of capital. Both of these obligations were implemented. From the beginning of 1868 up to our stoppage we were periodically extending; the work at an aggregate outlay of about £19,600, which was provided by cash advances and by parties with whom we were trading. I attribute my difficulties to our capital being too small for the largeness of our business, and to losses sustained on contracts made in the opening of the present year, and the great rise in the price of coal. If the works were still of the value equivalent to their cost, the firm would be solvent and able to meet its obligations". Mr James Mungo Brown, after being sworn, concurred in omnibus with Mr Dunnet so far as related to the period after which he became a partner.

An appeal for a deliverance of the trustee of the bankrupt estate of the East Hermand Shale Company (Limited), West Calder. At the date of the bankruptcy of this company the Caledonian Railway Company were their creditors for an account of £70s, 14s. 8d., of which £263, 4s 2d was stated to have consisted of charges or tolls for carriage of oil for the company; a second proportion of the account, consisting of charges for the supplying of engine-power and other expenses in carrying certain wagon-tanks in which the oil was held; and the third, of rates for the carriage of other goods along the railway, including therein tolls for the use of the railway, the amount of these tolls much exceeding, it was said, £280. The railway company, also at the date of bankruptcy, held a number of wagons and tanks, in which the oil was carried along the line, belonging to the shale company, the estimated value of these tanks being £280.

The above will be sold cheap. Can be seen at the Works; or apply to Thomas Gentles, East Hermand, West Calder.