A major new crude oil works constructed by the Oakbank Oil Company near Winchburgh to exploit the Duddingston shale-field and other previously untapped reserves of shale beneath the Hopetoun Estate. The works were the first to use electrical power for all major processes, and a pioneering 2'6" gauge electric tramway was constructeed to convey shale from mine to oil works. This tramway ultimately served mines at Duddingston No.1 & 2, Duddingston No.3, Tottlywells No.3, Philpstoun No.1 and Philpstoun No. 6. The crude oil produced at Niddry Castle was transported by rail to Oakbank refinery until this closed c.1932.

Most of the workforce of the oil works were accommodated in company housing at Winchburgh.

Plentiful supplies of shale beneath the Hopetoun estate ensured that Niddry Castle works continued in operation almost until the end of the Scottish shale oil industry; ceasing production in 1960. 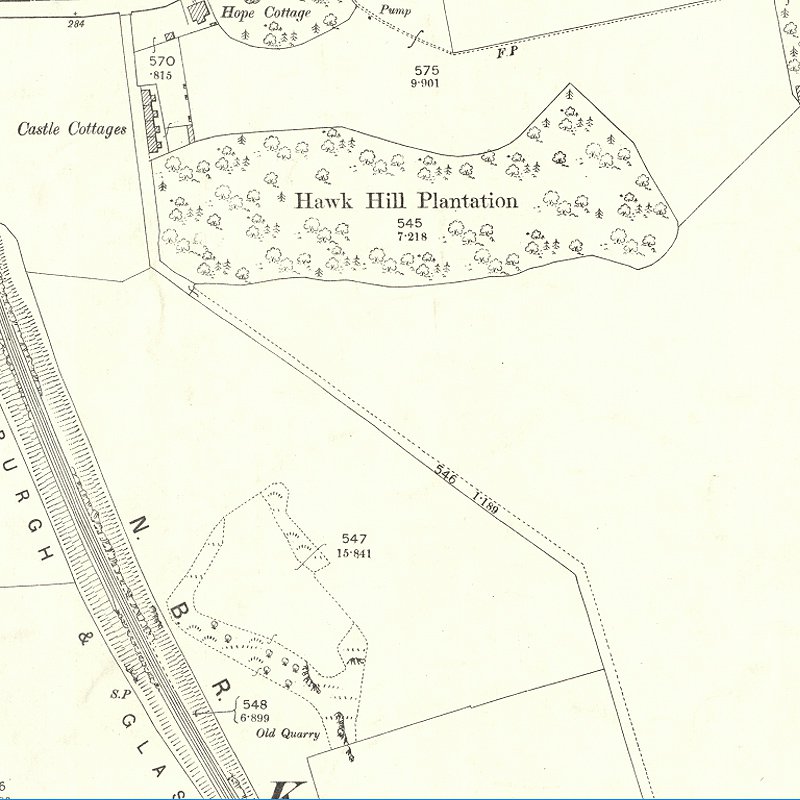 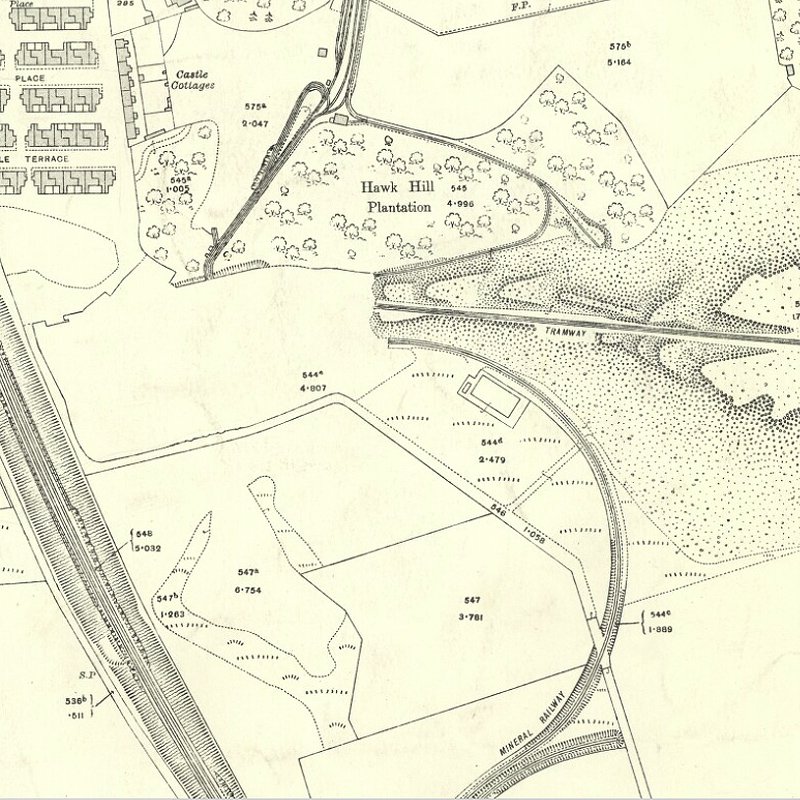 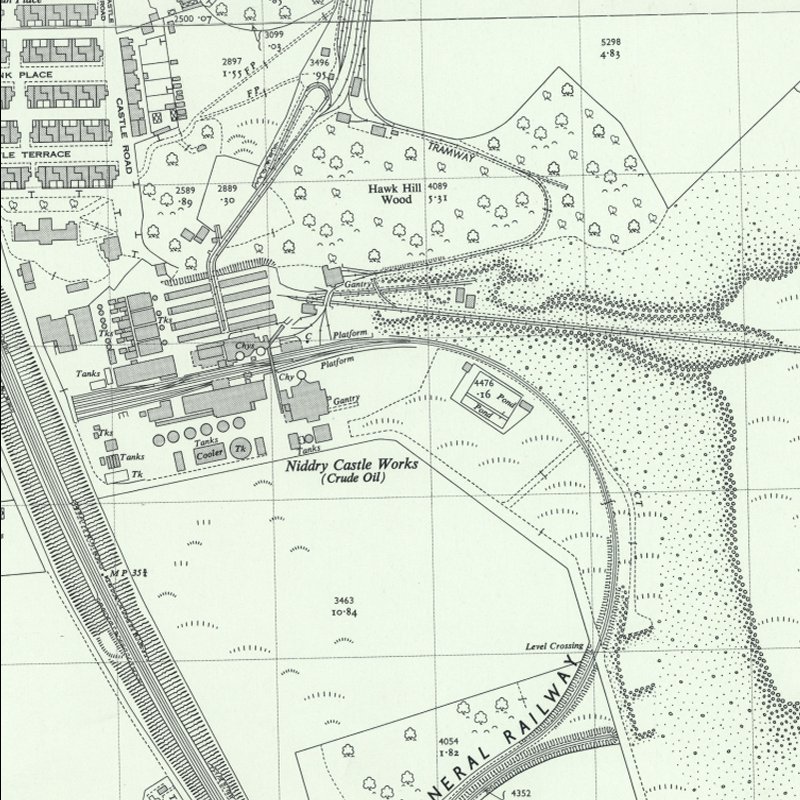 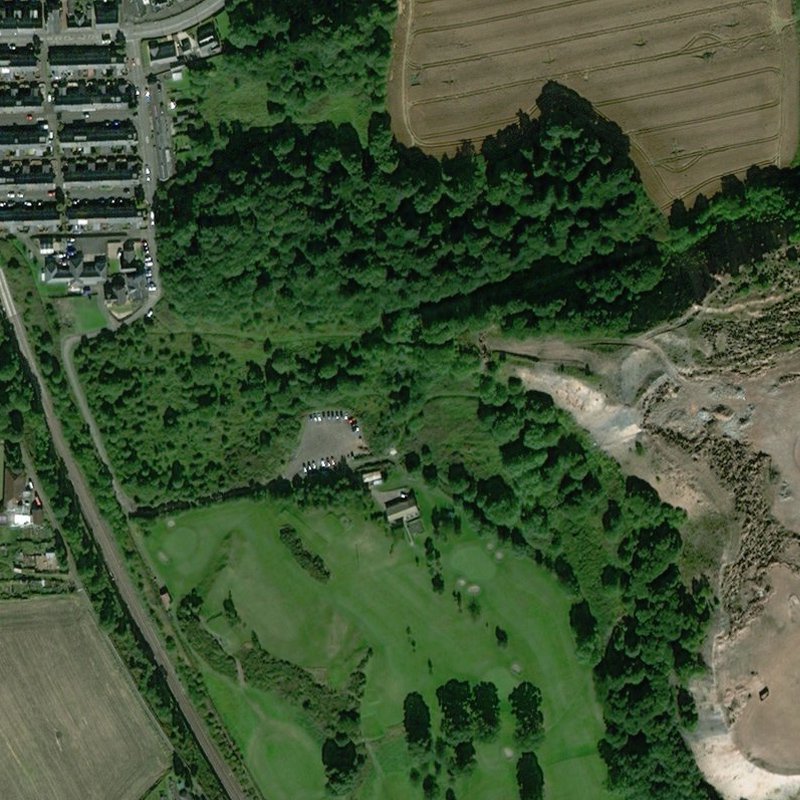 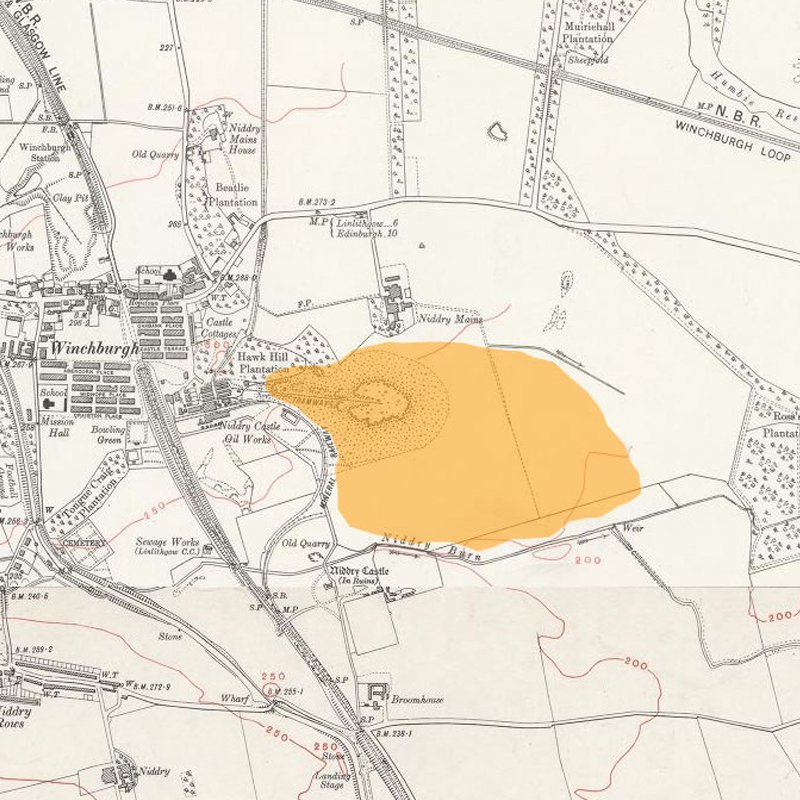 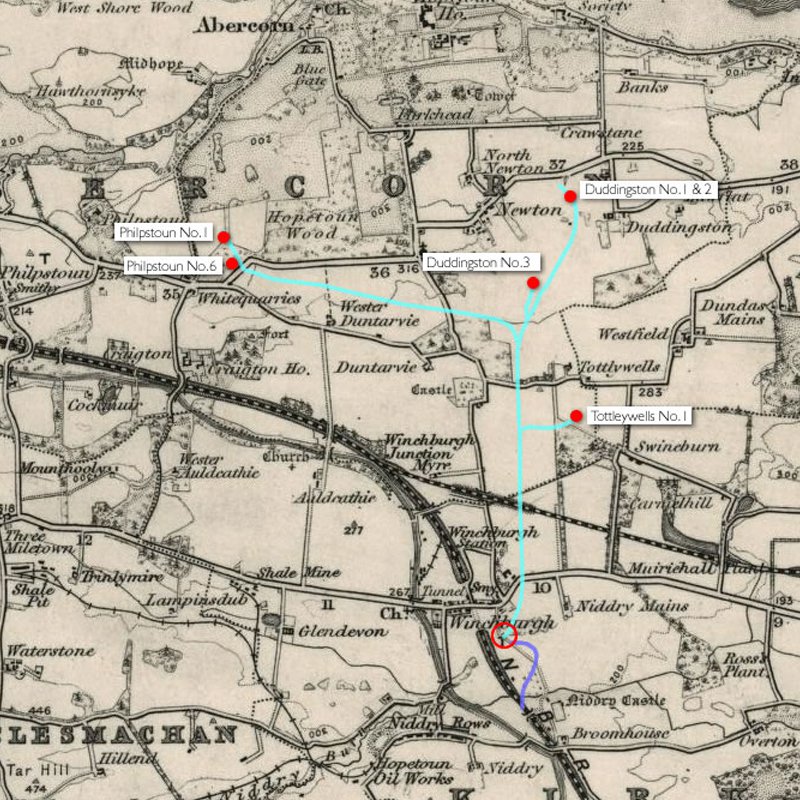 Railways and mines serving the works, plotted on 1" OS map. 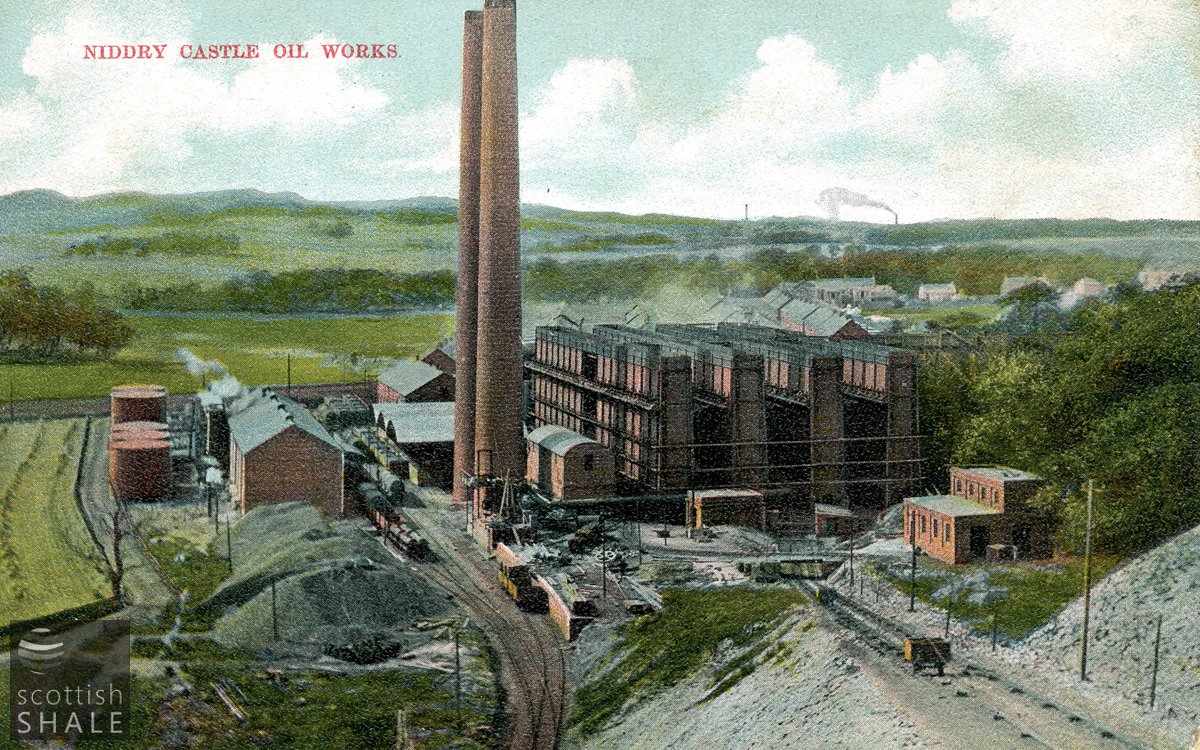 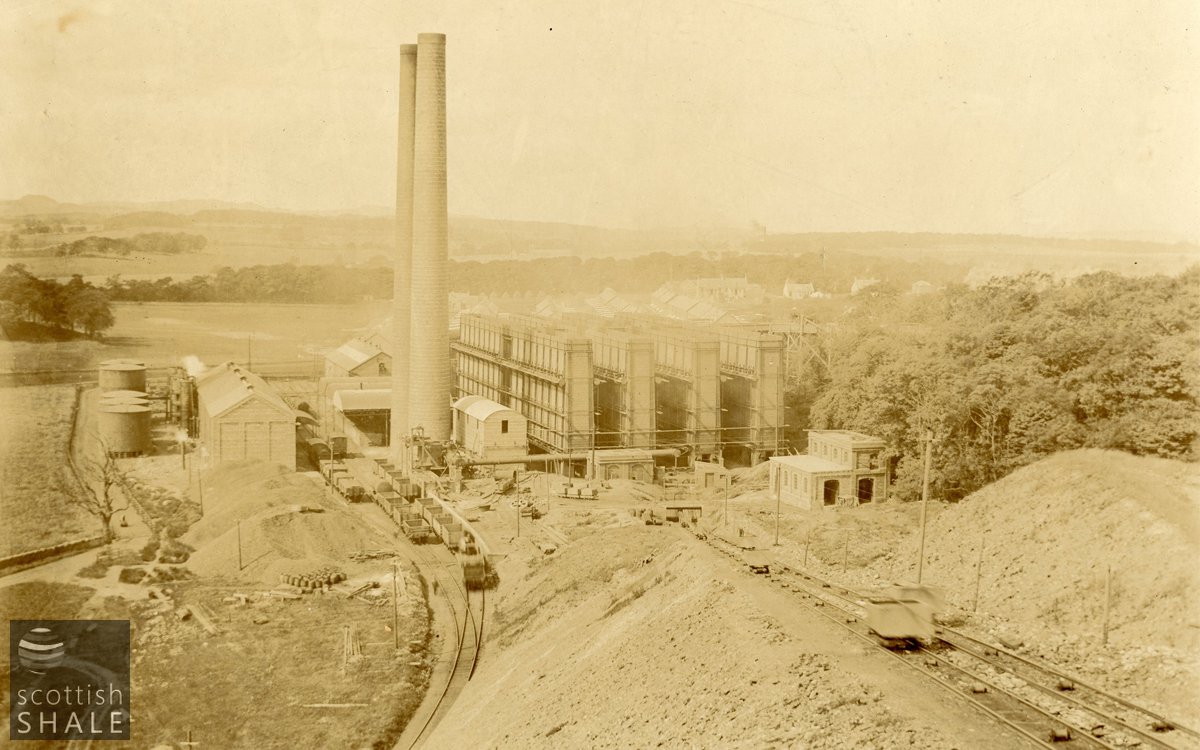 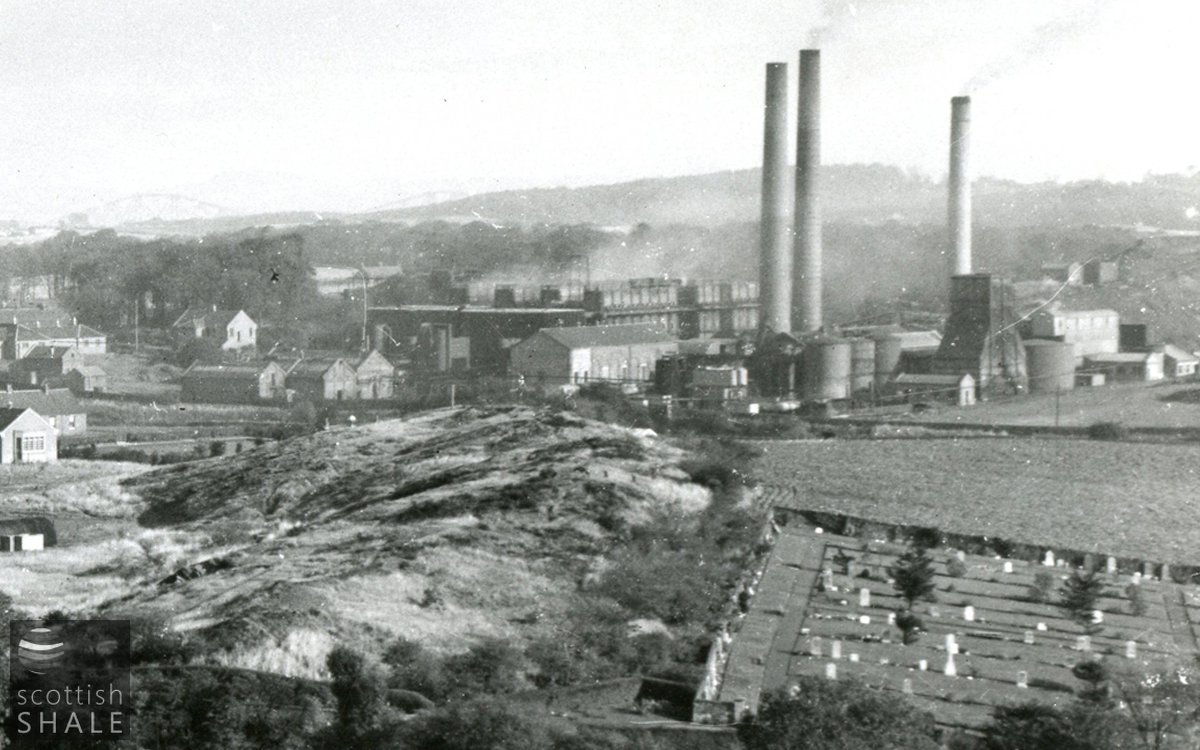 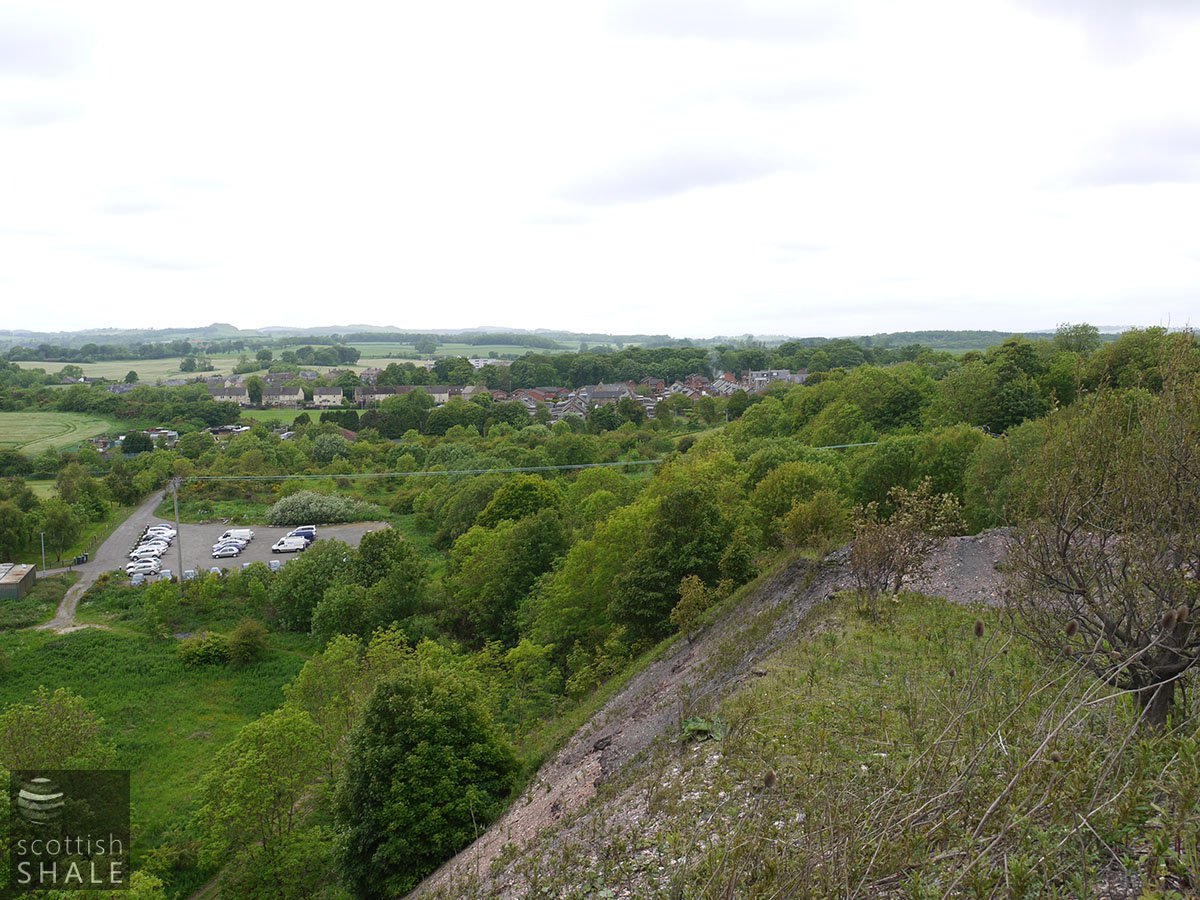 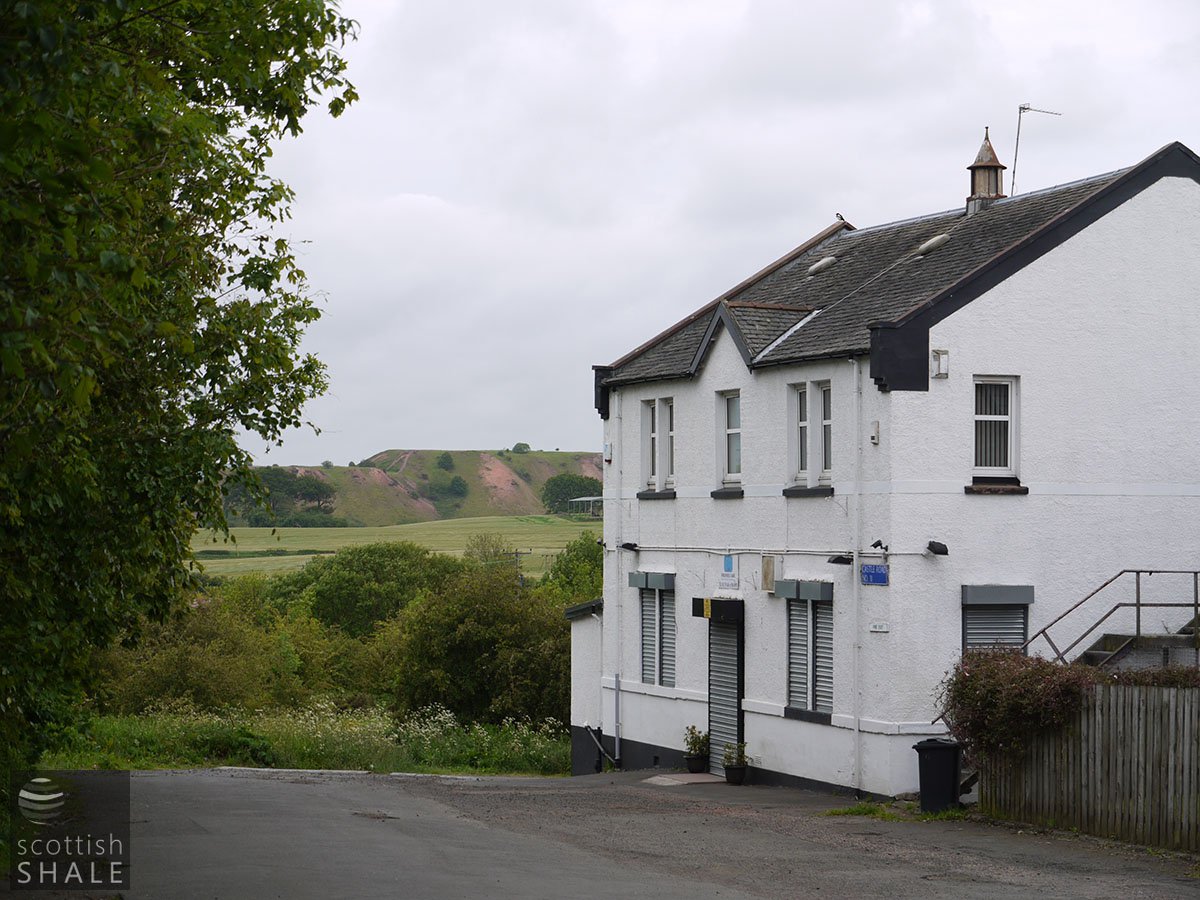 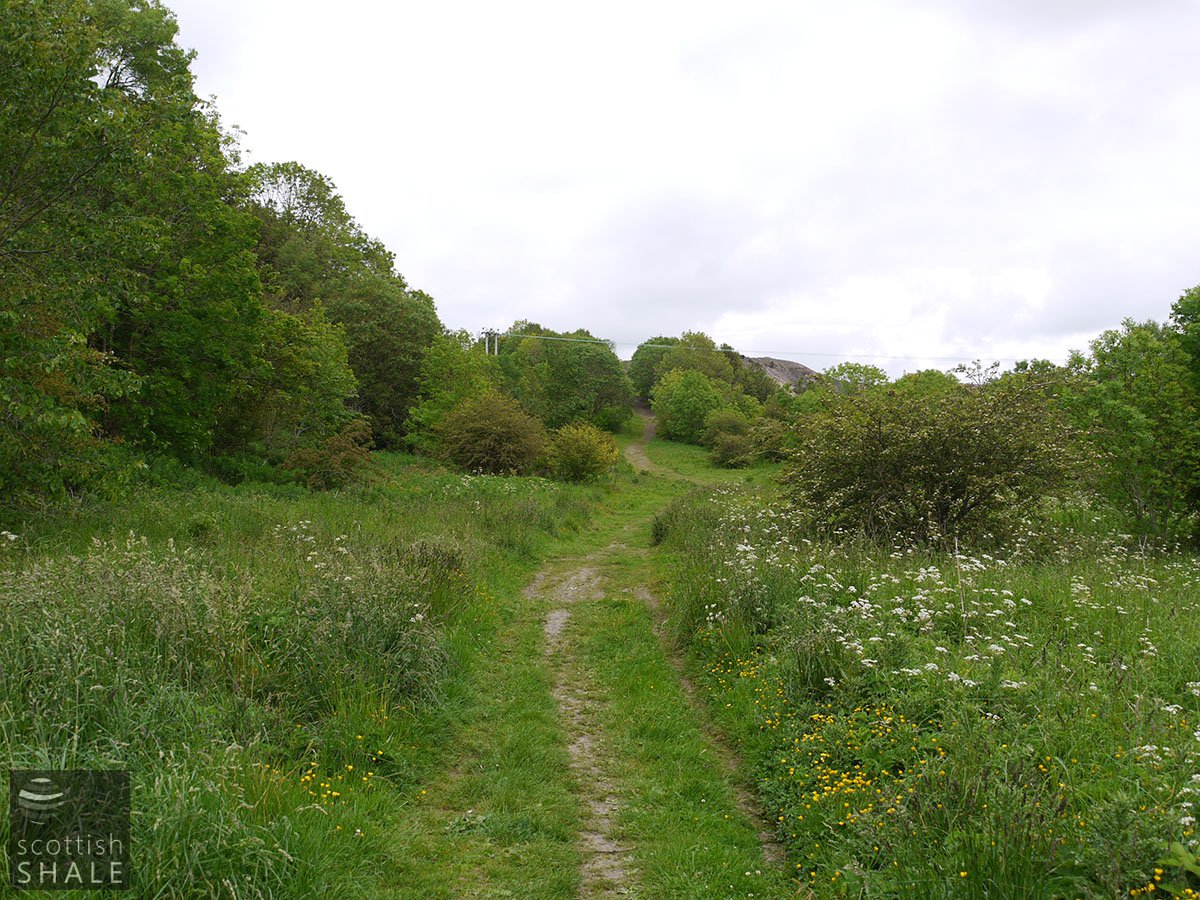 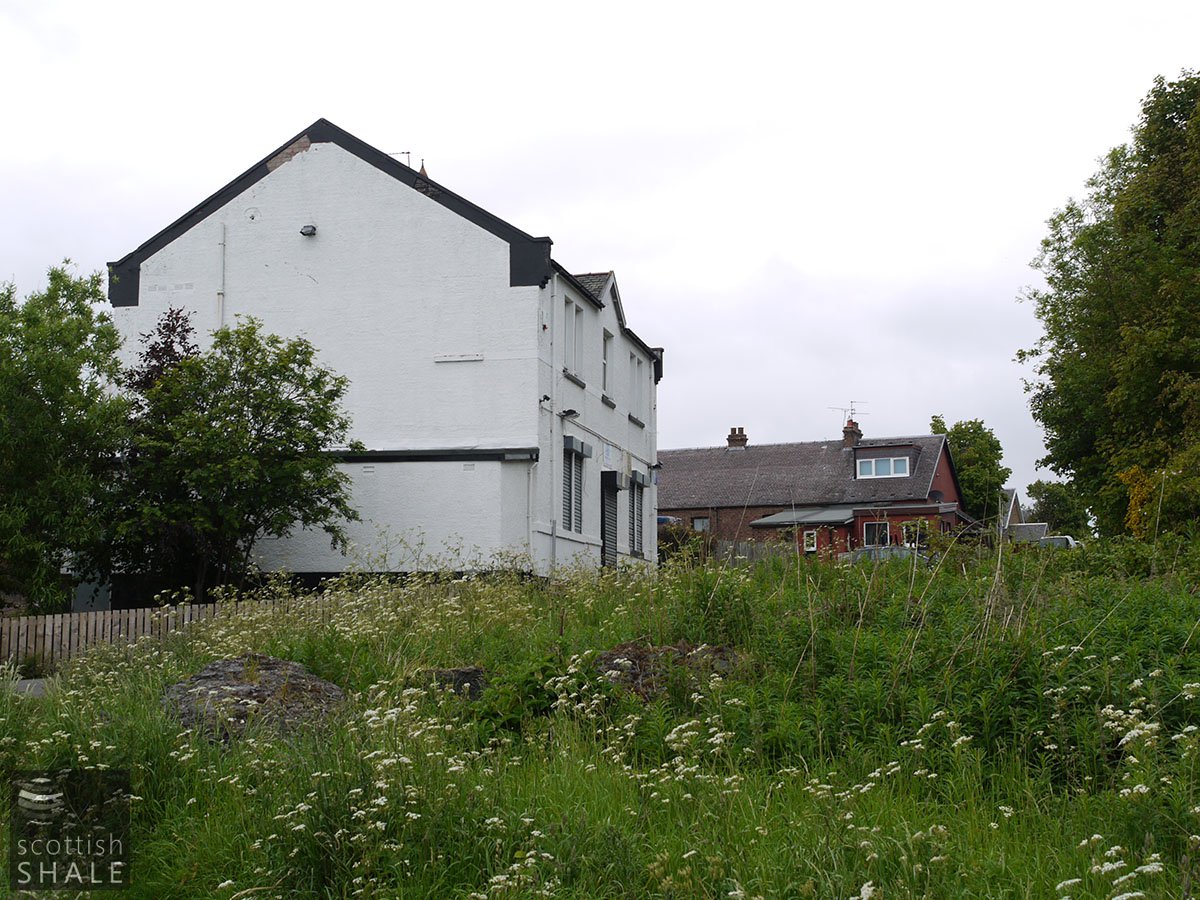 Considerable progress has now been made the erection of the new works the Oakbank Oil Company at Winchburgh. In addition to several blocks of workmen's houses, the retorts, sulphate house, and other departments have been completed, as also the line of railway in connection with the mines. Another block of tenements is at present being built, and operations are in progress with the branch railway connecting with the main line. The shale field is valuable one, and the industrial prospects of the district are very good. Many workmen thrown idle by the stoppage of the Linlithgow Oilworks have found employment at the new works.

The retorts have been finished and the mines are in active operation, shale from which is being stored in bing to meet future demands. The other portions of the new works are also now practically completed, as are the one hundred houses which the company are erecting for their employees. Trading premises are springing up all around, and large new premises, intended to be licensed, are being built Mr T.M. Woodcock of the Star and Garter Hotel Linlithgow. Schedules are also out for the erection of a new Roman Catholic school.

The oil works and the mines, which are two miles apart, are connected by an electric railway. Motive power for both proceeds from a central electrical station at the oil works, where all the steam is used up with the least possible loss of heat and power. These Stirling boilers, with chain-grate stokers, give the necessary steam at 150 lb. pressure. On account of the distance of the mines from the power station, three-phase electric apparatus is installed, generating at 3300 volts 25 periods, with step-down transformers at the power station for the oil-works; and also at the mines, for supplying current at 440 volts to the various motors. In connection with the power station it is interesting to note that the generating units are two Westinghouse single-acting compound engines, capable of developing 400b.h.p. at 250 revolutions per minute. The engines are fitted with flywheel inertia governors.

The Directors are pleased to report that the Marquis of Linlithgow has granted the company a lease of the shale in the lands of Humbie, Niddry Mains and New Mains. Bores are now being put down in these lands and give every indication of a considerable area of shale being found. The Niddry Castle works were started in May of last year and have been in full operation since the month of October. The yields and costs attained have realised the anticipations of the directors, and have justified the expenditure necessary to construct and fit these works on the most modern scientific principles.

Oakbank Oil Company have now commenced operations in connection with the opening of another mine in the Duddingston leasehold. It is proposed to go on increasing the size of Niddrie Castle Works at the same time, to overtake the increased output of shale. We understand that contracts are closed for the erection of other two waterproof boilers, similar to those already in the works, as well as two additional engines of 750 horsepower each, and two generators of 500 kilowatts. About 200 more miners will be employed when the new mine is open and that the Company intend building more house in Winchburgh for their workmen, it being stated that they will erect fifty new houses there at an early date.