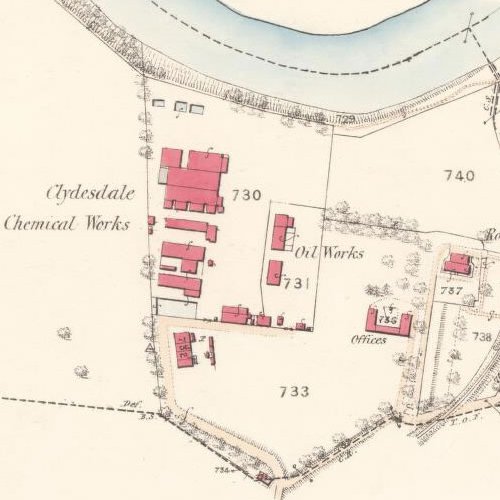 Redwood notes: "In 1853 the Clydesdale Chemical Company, often erroneously called the Cambuslang Chemical Company, started in the oil business, and its operations led to one of the most famous lawsuits ever tried by jury. The trial commenced on November 1, 1860, and lasted over a week , during which time the services of Great Britain's most eminent chemists were brought into requisition by either one side or the other, their testimony being taken to determine the line of demarkation between shale and coal. The Clydesdale Chemical Company's works were built at Cambuslang by Brown Bros. & Company, with Bain (on whose estate the works were situated) a sleeping partner. When operations were first commenced, crude oil was produced from Parrot Coal, but the company eventually resorted to the use of Boghead Coal, which they retorted by the process known as Continuous Distillation in Ovens, obtaining by this process a yield of 85 to 90 gallons of 880 specific gravity, crude oil per ton of coal."

"Refining operations were also carried out at these works and everything went along prosperously for about seven years. As the company was using an infringement of Young's patent, it very naturally made every endeavour to prevent the nature of the work it was engaged in from becoming public; but not withstanding every precaution taken, work reached Young's ears of what was going on in the works, and he immediately started the law plea above referred to; and, being awarded a favourable verdict by the jury, he stepped in and relieved the Clydesdale Company of £6000 and 3d on every gallon of crude oil manufactured by it. The result was disastrous to the company, which was completely ruined, and Brown Brothers withdrew from the business in 1862; but Bain took Carlisle (who had previously been acting as chemist for the company) into partnership, and the new firm carried on the business under the name of Thomas Carlisle and Company until the year 1867, when the work was finally abandoned."

Mapped by the Ordnance Survey of c.1864, showing the chemical works and associated oil works. 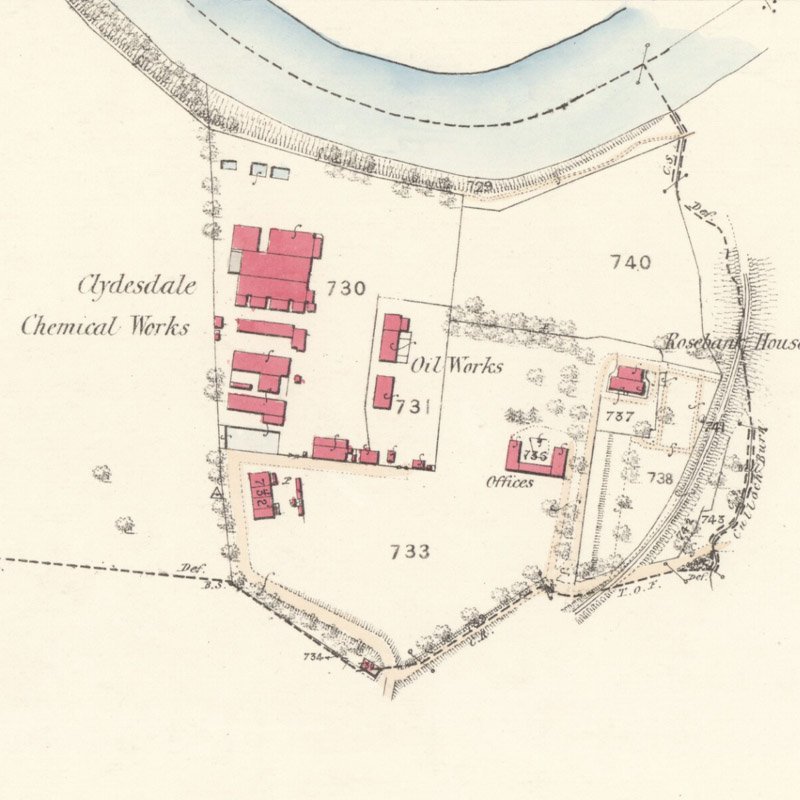 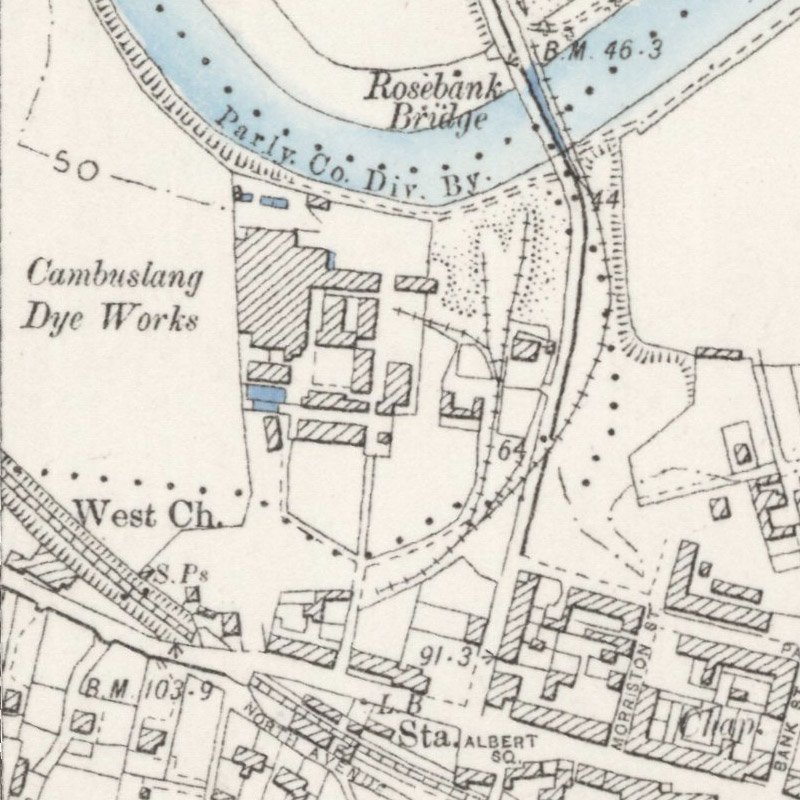 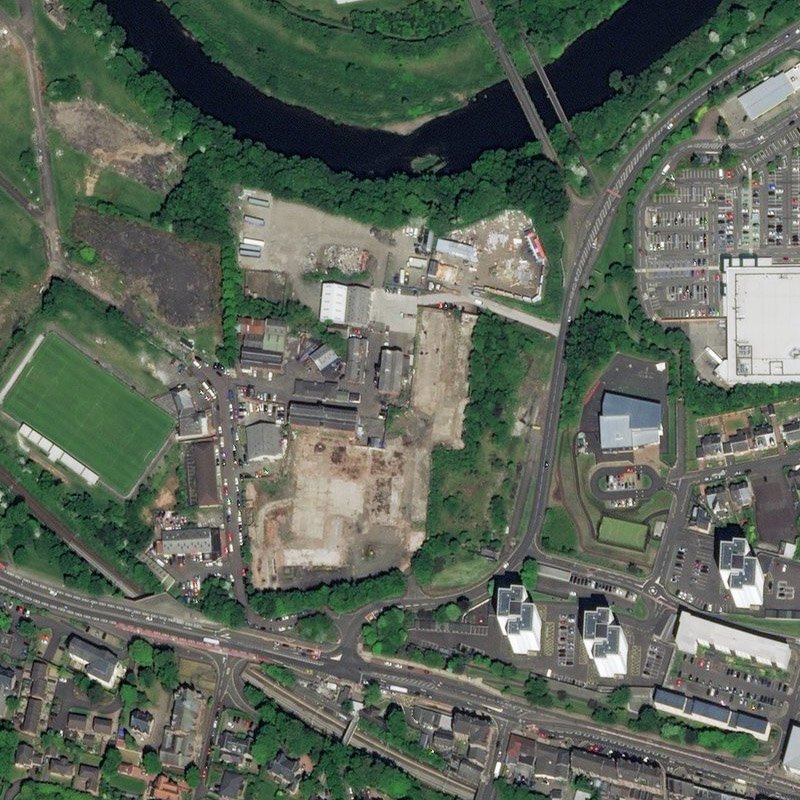 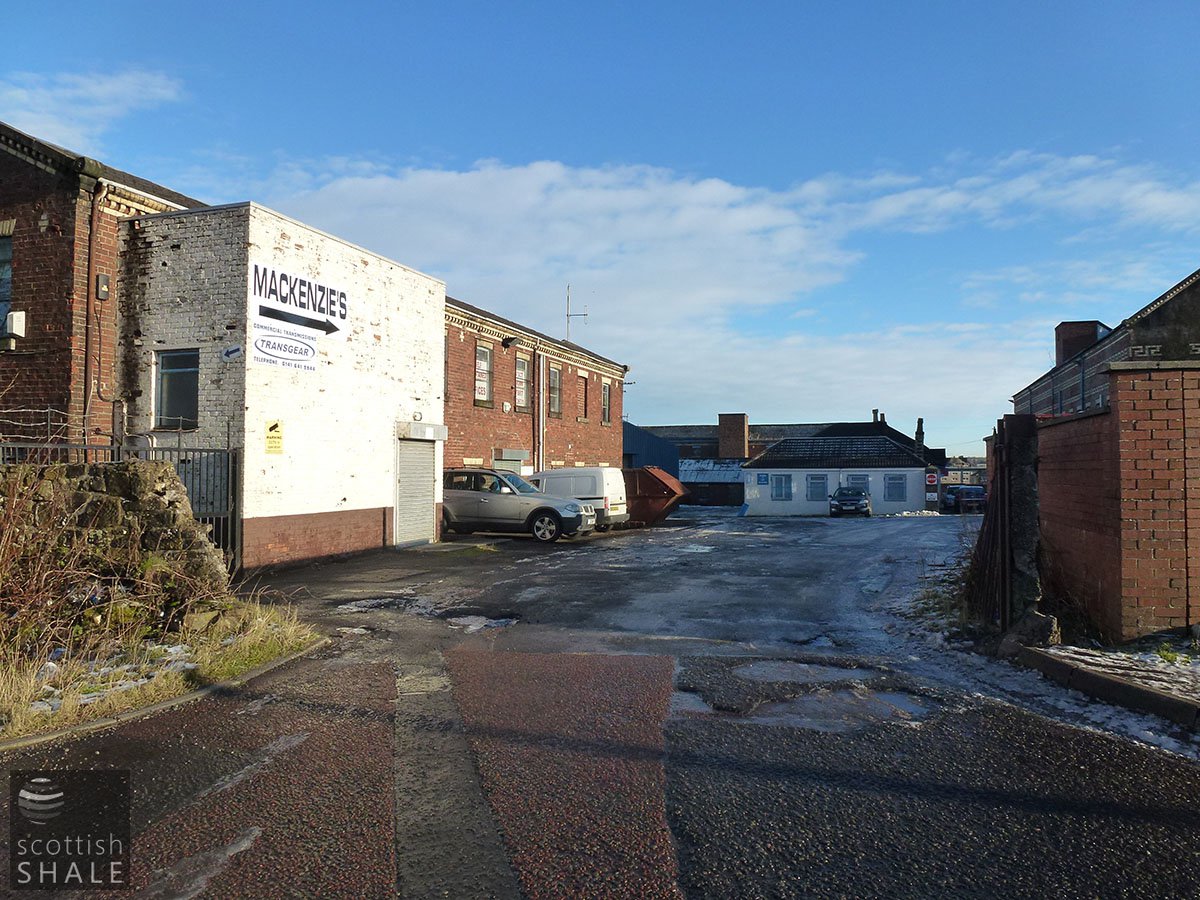 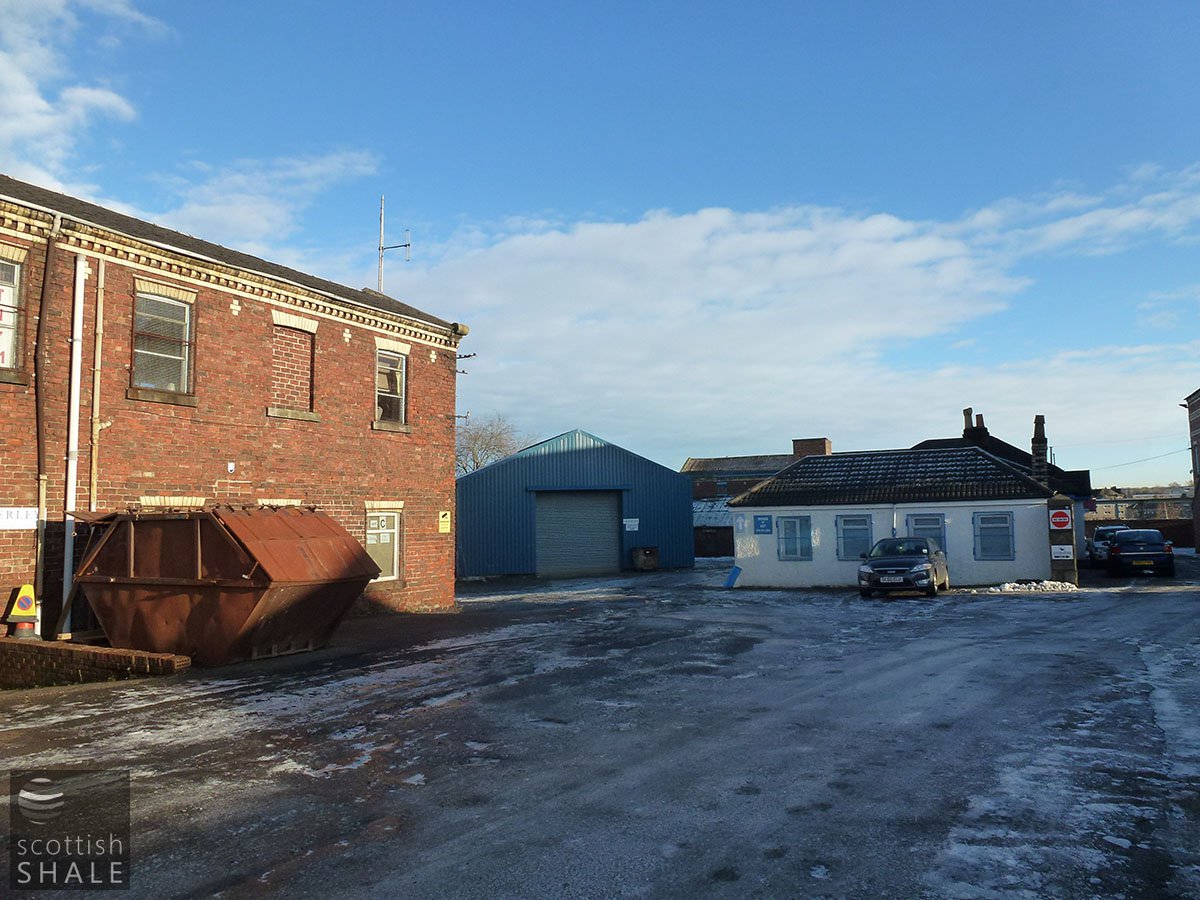 Within the works yard with a glimpse of "oil works" buildings visible between the office and blue/grey shed. Looking east. December 2011. 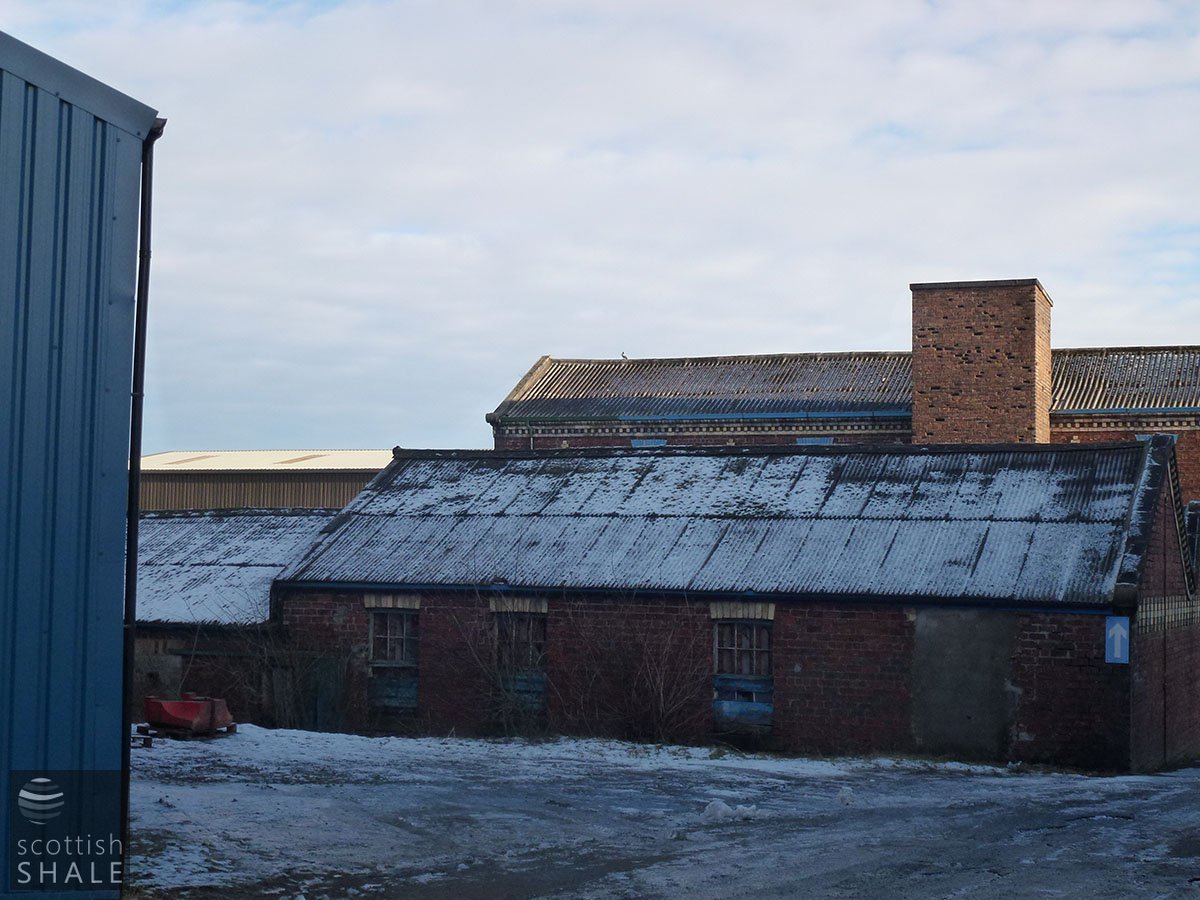 VALUABLE PUBLIC WORK ON THE RIVER CLYDE AT CAMBUSLANG, NEAR GLASGOW.

To be SOLD by Public Roup, within the Hall of the Faculty of Procurators, St. George's Place, Glasgow, upon Wednesday the 23rd day of May 1867 at Two o'clock Afternoon, under the power of sale contained in a Bond and Disposition in Security; THAT PUBLIC WORK known as THE CLYDESDALE CHEMICAL WORKS, situated at Rosebank, on the South Side of the River Clyde in the parish of Rutherglen, close to the Glasgow and Hamilton Road, and to the Cambuslang Station of the Caledonian Railway, as presently occupied by Messrs. Thomas Carlisle & Co. as an Oil-Work. The ground extends to Three Acres and Ten and a-Half Poles or thereby, and is well enclosed on Two Sides by a substantial Stone Wall. There is a Steam Engine of Twenty-five Horse Power on the Premises in good working condition, with Pipes and Pumping-Gear for Drawing Water from the Rice; also a Large Water Tank and Purifying Ponds. Part of the Buildings have been destroyed by Fire, but could be Restored at a Small Expense. The Greater Portion, however is Standing in a Good State of Repair, and has been Valued by Competent Valuators at £1717, 16s 4d., exclusive of the Steam Engine. There is a Good Counting House and Two Cottages of Two Apartments each connected with the Works. From the convenient situation, the unlimited water Supply, and the facility of access to Glasgow and Greenock and to the Mineral Districts of Lanarkshire, these Works are peculiarly suitable not only for the Parties connected with the Oil Trade, for which they have been fitted up, but for a Public Work of any description. For particulars application may be made to JAMES McMICHAEL, Accountant, 36 Argyll Arcade; or MONTGOMERIE & FLEMING, Writer, 62 Miller Street Glasgow, the latter of whom are in possession of the Title-Deeds and Articles of Roup. DUNCAN KEITH, Auctioneers, Glasgow 13th April 1867.