This site was occasionally referred to as Stankards Oil Works, but was more commonly known as Uphall Oil Works. From the outset it served both as a crude oil works and as a refinery, processing the crude oil produced at Uphall, Boghall and Hopetoun oil works. It is probable that the Uphall Oil Works were built on the site of the Buckside (Pumpherston) Oil Works of Peter McLagan. The short-lived Stankards Paraffin Refinery, active in the mid 1860's, also appear to have been sited in the vicinity of the Uphall Oil Works.

Redwood notes the original proprietors as Meldrum, McLagan & Simpson from 1866 to 1871, when it became the property of the Uphall Mineral Oil Company Ltd. He also notes " The Uphall Oil Work, started by Messrs Meldrum, McLagan and Simpson, had a successful run for some years. Meldrum supplied the necessary funds, McLagan the shale, as well as the management of the estate, and Simpson took the management. This work became the property of the Uphall Oil Company Limited in 1871.....capitalised at £170,000, which bought up the Uphall and Sterlaw [sic] Oilworks.... The company eventually met with insurmountable reverses, and unable to do any better, finally amalgamated with Young's company."

The company constructed housing for its workforce at Stankards Rows, and subsequently at Beechwood Cottages and Uphall Station Rows. The oil works were initially served by Stankards No. 1 shale pit, sunk close to works, but reserves were exhausted by 1873 and supplies of shale then had to be transported by mineral railway from Forkneuk, about a mile to the north.

When the Uphall Oil Company Ltd was amalgamated with Young's Paraffin Light & Mineral Oil Company Ltd in 1883, it provided Young's with a more practical site to retort shale produced at its recently-opened Newliston mine. Newliston shale was transported three miles to Uphall rather than having to be carried more than 10 miles to Young's works at Addiewell. When Young's opened mines at Ingliston, c.1892, this shale was also transported to Uphall for retorting.

Crude oil production at Uphall ceased c.1923, however the refinery was then used to develop plant and processes for the refining of imported crude oils. Techniques developed at Uphall were applied in the development of a new refinery at Grangemouth, which opened in 1924. A pipeline was laid from the tank farm at Grangemouth to supply Uphall Refinery with imported Iranian crude oil. "BP" motor spirit and other fuels were produced there. Refining ceased c.1937 and the plant was demolished c.1942. 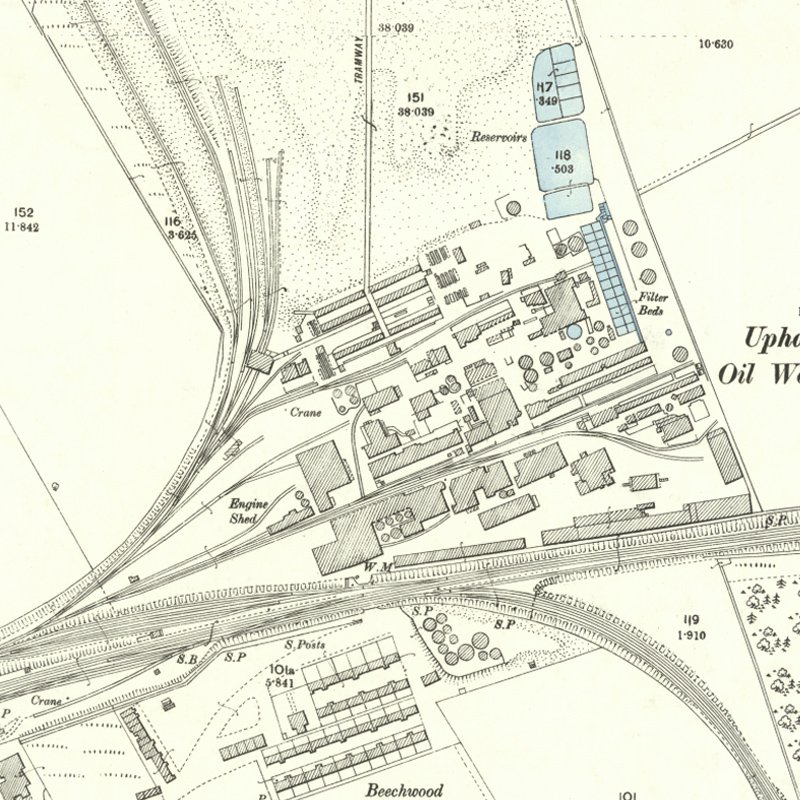 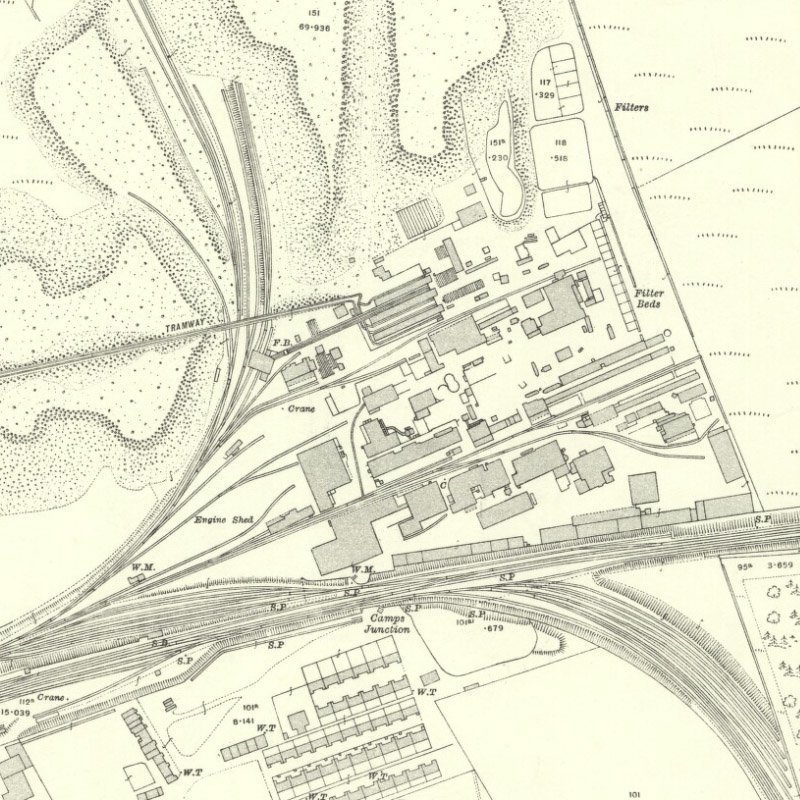 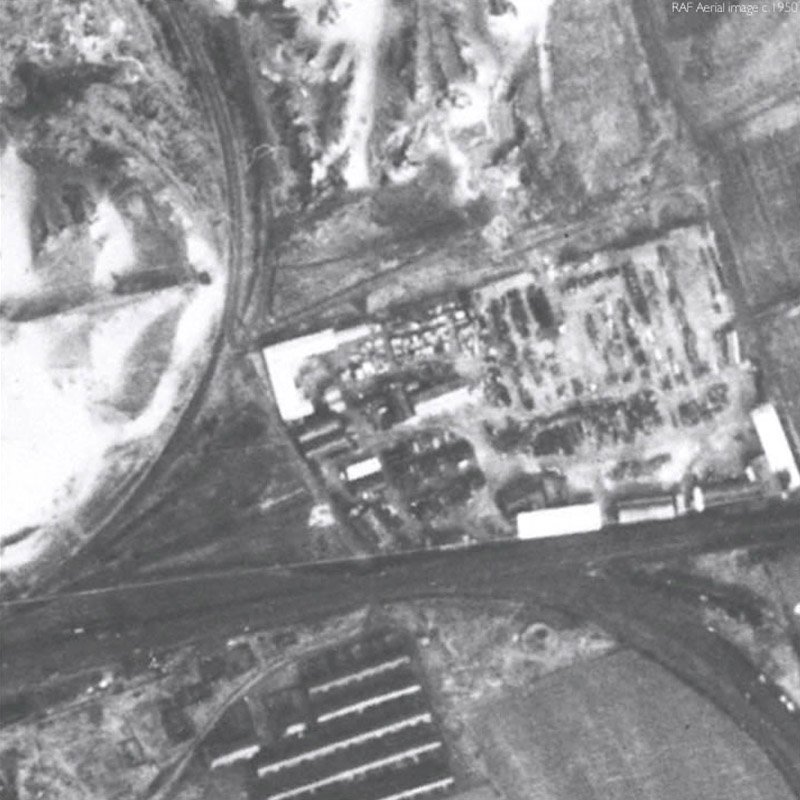 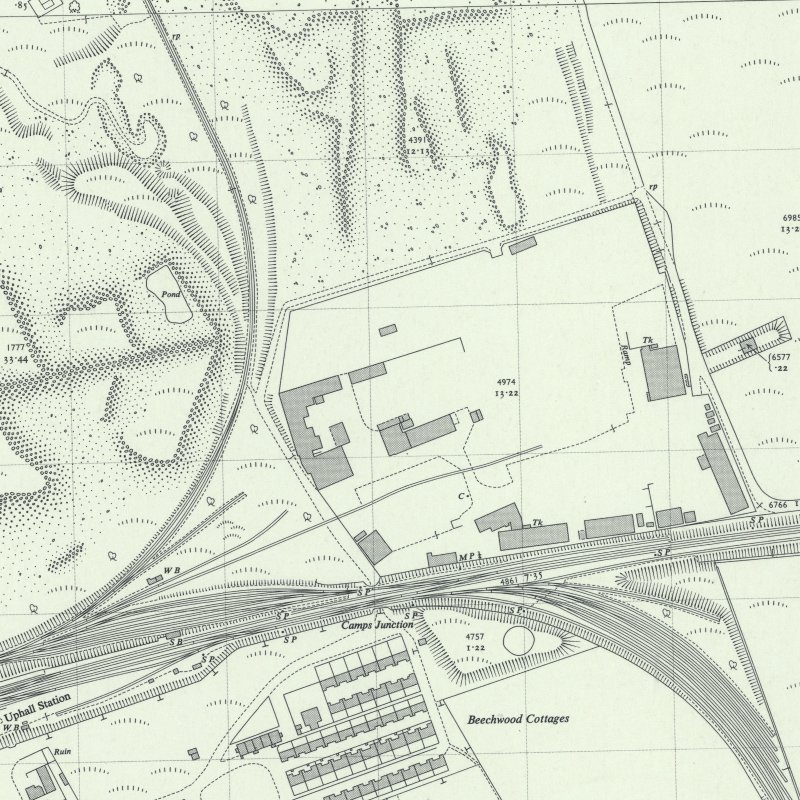 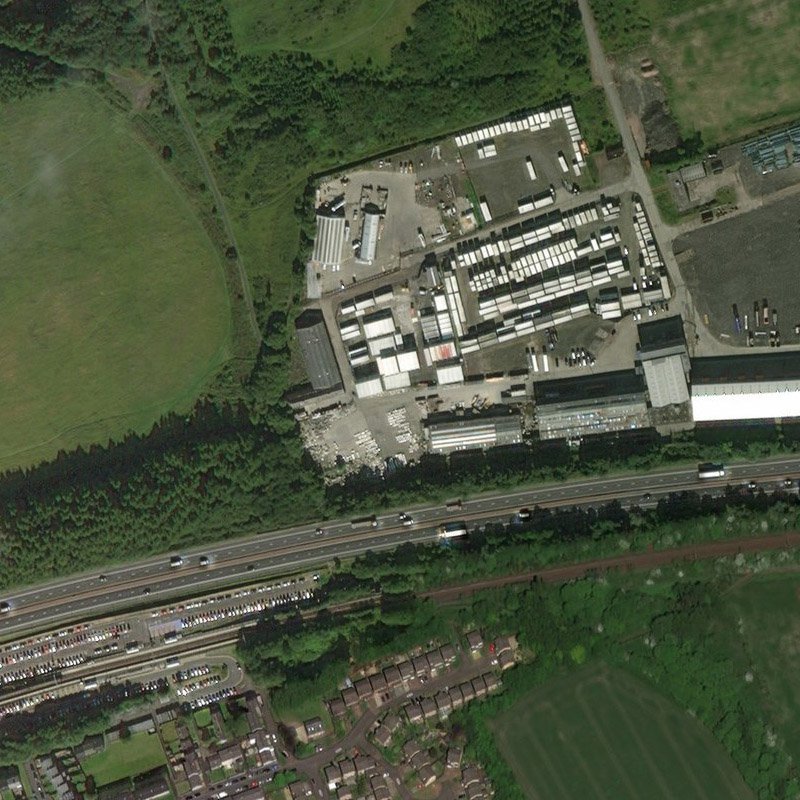 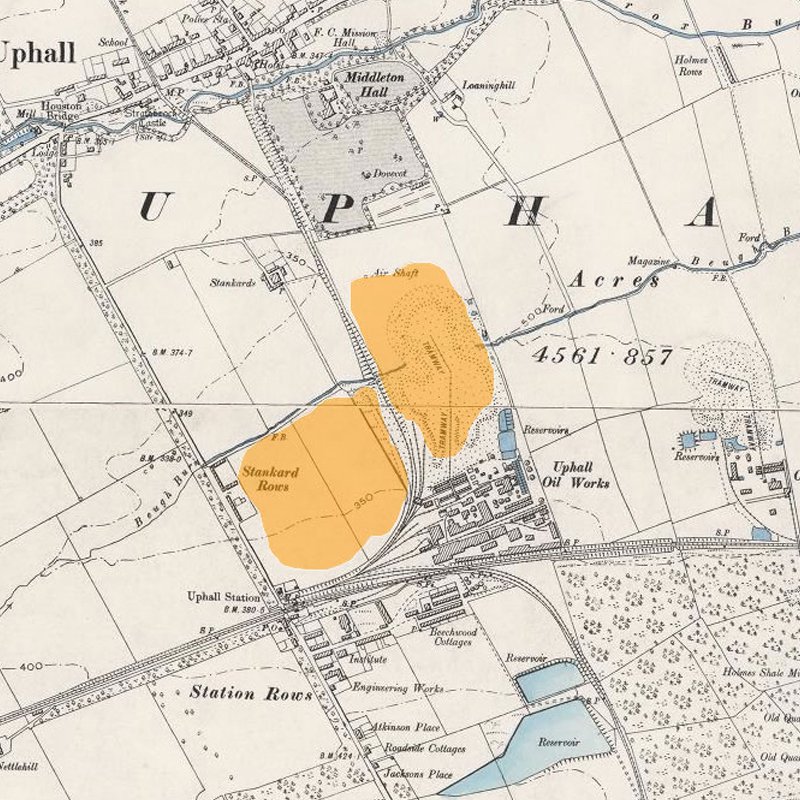 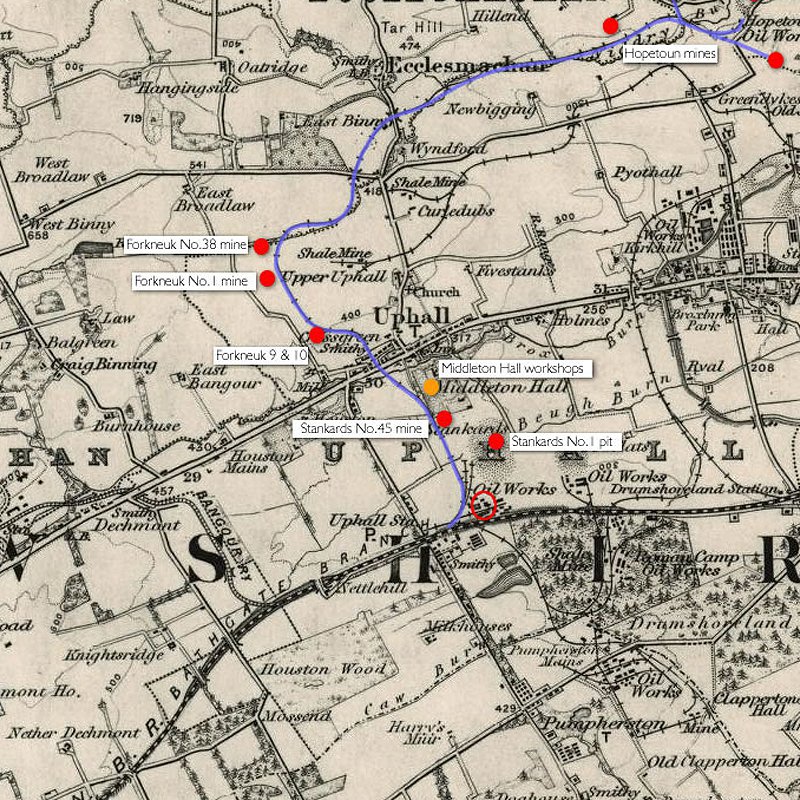 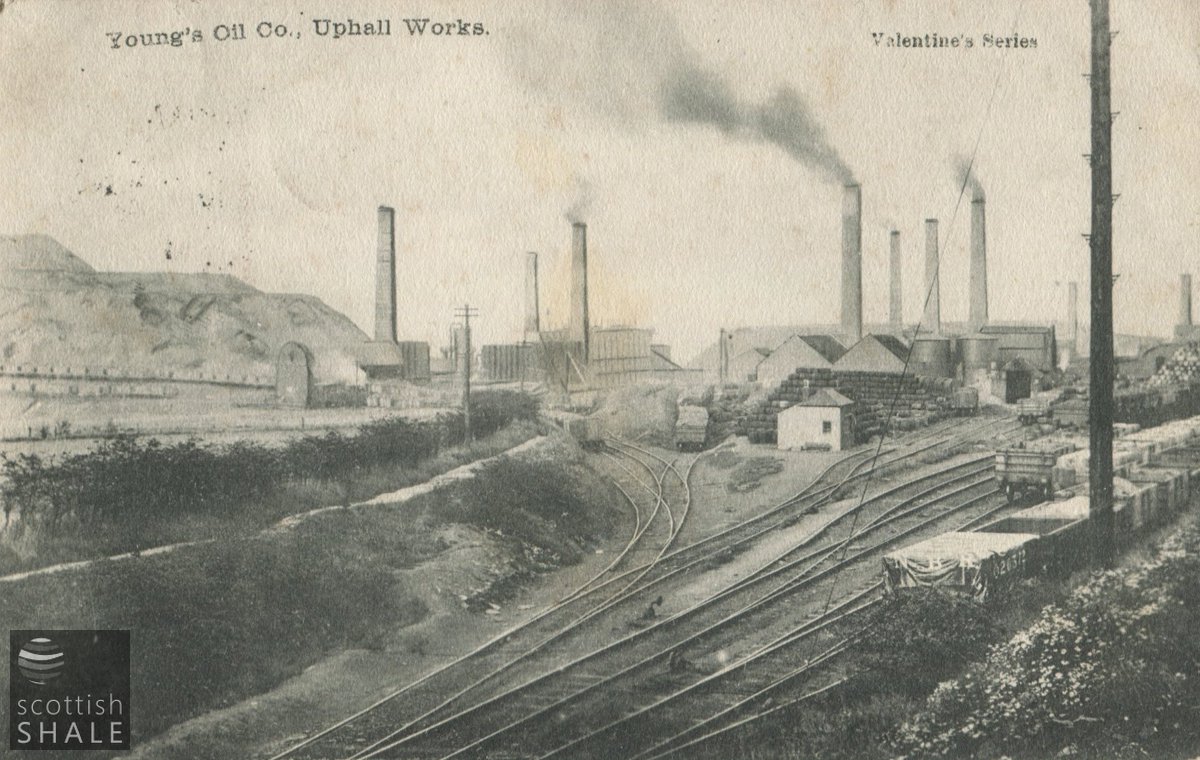 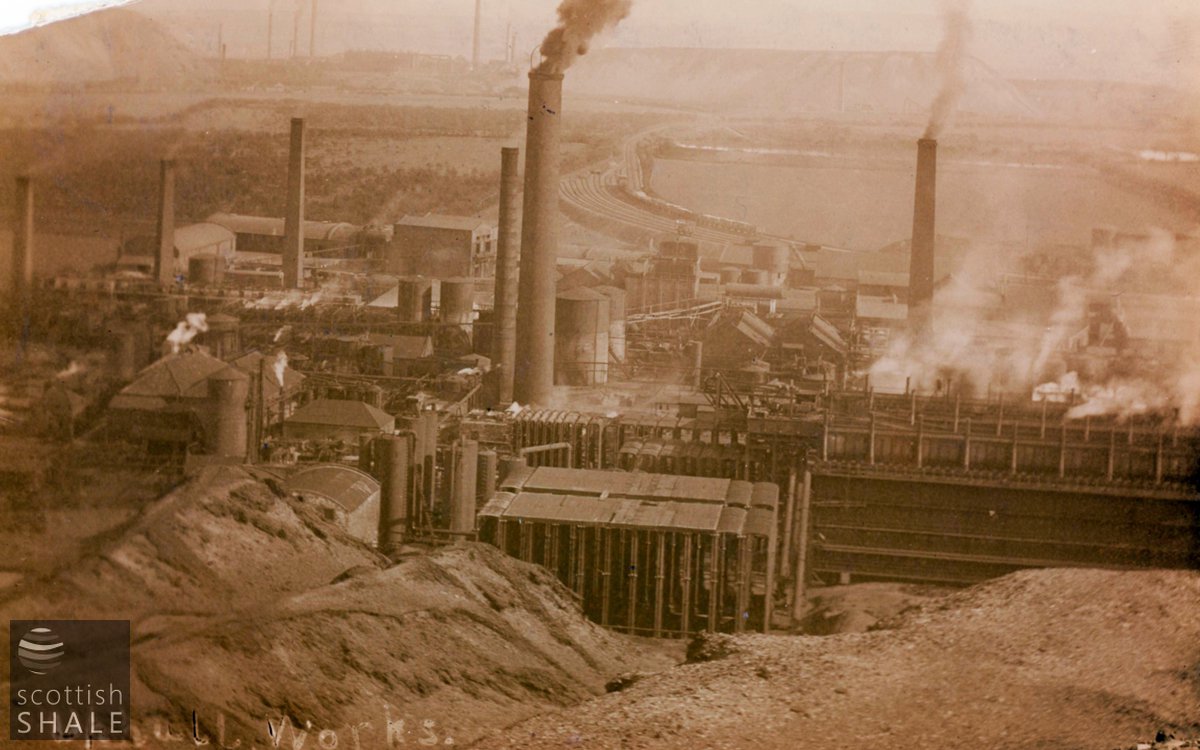 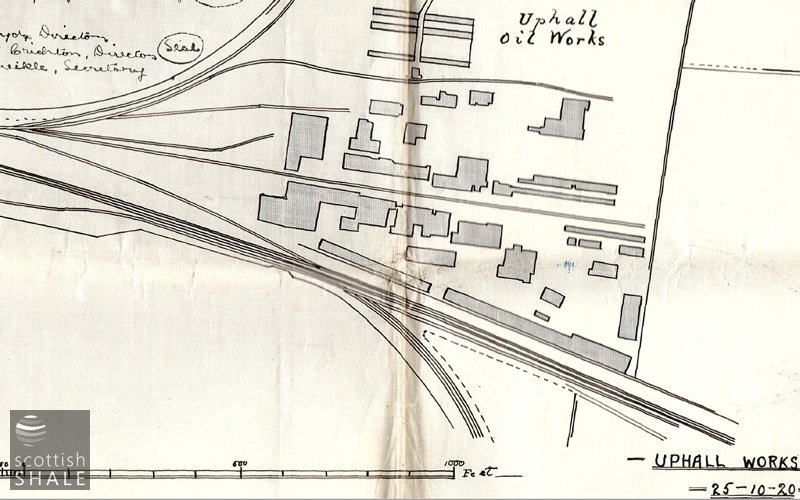 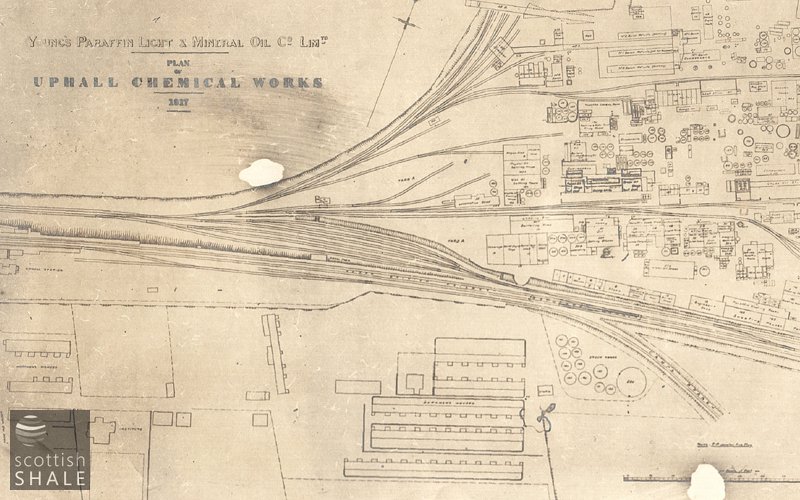 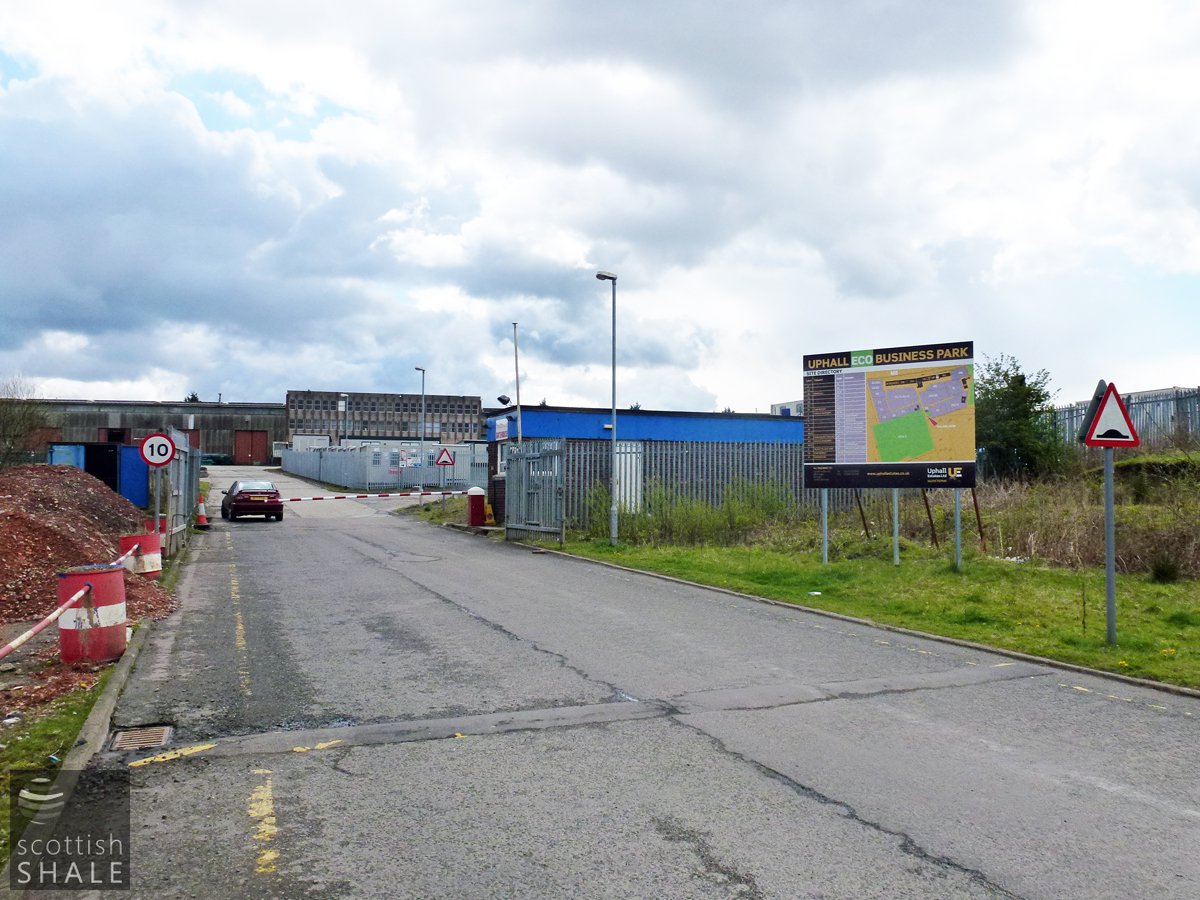 FIRE -The large works at Uphall, belonging to the Uphall Mineral Oil Company, to Messrs P. M'Lagan, Esq., M.P. ; Edward Meldrum, Esq. of Dechmont ; and George Simpson, Esq. of Benhar, have had a narrow escape of being totally consumed by fire. On Sunday morning, at 1 o'clock, while one of the workmen was on his way home from a neighbour's house, he observed flames rising from the direction of No. 4 boiler, and at once roused Capt. Birnie, the manager of the works, who lives in Uphall village, and who was early at the scene of the fire, and by the almost superhuman exertions of himself and a number of willing workmen, who happened to have a strong supply of steam at their command, the fire was entirely mastered at 3 o'clock. The men deserve great praise for the manner they acted under the able commands of Captain Birnie, as in some instances the heat was so oppressive as to blister the men's necks. From an inspection made after the flames were got under, it was supposed the fire was originally caused by the door of No.4 boiler not being properly fastened and screwed up, thus allowing the oil to sip through the crevices and gradually gaining bulk ignited.

The Uphall Mineral Oil Works, which, till within the last few months, belonged to Messrs Peter M'Lagan, M.P., Edward Meldrum of Dechmont, and George Simpson, Benhar Colliery, were established in 1866. Situated in close proximity to the Edinburgh and Bathgate Railway, they cover 36.5 acres of ground, and comprise, besides a prolific shale pit, all the necessary appliances for manufacturing crude oil, and obtaining the various products resulting from the refining of that article. The shale and other mineral fields connected with the works extend to about 2000 acres, and the quantity of crude oil produced exceeds a million gallons per annum. The undertaking of the firm referred to also embraced the Boghall works, with mineral fields extending to 3000 acres, and apparatus capable of producing 900,000 gallons of crude oil per annum. In the spring of the present year, the original copartnery was merged in a limited liability company, having for its object the extension of the undertaking by the acquisition of the Hopetoun shale field, and the combination of the various works, so as to carry on the manufacture to the greatest possible advantage. The arrangement adopted is to work the shale in all the fields simultaneously, and to manufacture the crude oil in each case in the immediate vicinity of the pits. The process of refining is confined to the Uphall works, to which the crude oil from Boghall and Hopetoun is conveyed by railway.

Evidence of the Uphall Mineral Oil Company, Paraffin Oil Manufacturers, Uphall, near Edinburgh. Our works are situated on the Breich Water. Employ 269 hands. Rateable value of works, £500. The bed of the stream is not silted up. Our works are not affected by floods. It is polluted by works above, not to our knowledge by mines. Obtain supply of water jointly from reservoir and from bore holes, and consume 16,000,000 yearly. Use yearly 38,500 tons of bituminous shale, 500 tons of sulphuric acid, and 125 tons of caustic soda or other alkali. Produce yearly, naphtha, 40,00 gallons; crude paraffin, 500 tons; lubricating oil, 120,000 gallons; illuminating oil, 1,000,000 gallons; sulphate of ammonia, 250 tons; and ammonia water, 500,000 gallons. The spent sulphuric acid after the first purifying process, and the spent caustic soda and the tarry matter after the second purifying process, are all recovered and used again as far as possible. The other liquid refuse flows into the stream. Produce yearly 32,000 tons of spent shale, which is deposited in heaps on our premises. Use steam, 110 nominal horse-power. Consume yearly 24,000 tons of coal, and make about 4000 tons of ashes, which are used chiefly for making and repairing roads. The excrements of our workpeople are used for manure. Have no suggestions to offer as to the best case of avoiding pollution in future, or as to the conservancy of rivers and streams.

Purchase and fusion of the Uphall Oil Co. ... The shareholders have been made aware from time to time that the shales in the West Calder district, although rich in oil, are more expensive to work, and do not yield the same profit, to those in some places further to the east. For a number of years your directors have been on the outlook for shalefields better suited to the altered circumstances of the trade and, as announced at last year's Annual General Meeting, they secured a lease at Newliston.... The company's Newliston shale could be distilled at Uphall thus saving considerably on railway carriage.

About six o'clock last night a fire broke out in Uphall Oil Works, belonging to Young's Paraffin Light and Mineral Oil Company (Limited), and caused damage estimated at about £10,000. It is not known what caused the outbreak, as it was discovered about half an hour after the men had stopped work. It originated, it is supposed, in the glueing shed adjoining the cooperage, from which it spread rapidly to the filling house, where about 200 barrels of oil were standing ready for dispatch, and these fed the fire to a great degree. The dispatch office and the loading bank caught fire, and then the bleaching house, containing a large number of settling vats filled with oil, became ignited. All these buildings were destroyed. Four stock tanks, the capacity of which was over 20,000 gallons each, next caught fire, and were also destroyed. Fortunately the wind kept in a favourable direction, and the fire was confined to the west end of the works. The work of the company will be dislocated owing to the fact that facilities for finishing the oil and dispatching it are practically destroyed. Coming as the fire does, at the busiest part of the season, it is most unfortunate for the company, as well as for the workmen who will be affected. The fire was seen for miles round the district, and the scene was visited by large crowds of people. The damage is covered by insurance.

Sir John Cargill referred to the arrangements which are in hand for the further development of the refining of Persian crude oil at Uphall. The work of laying a pipe-line, fourteen miles in length, from Grangemouth to Uphall, for the conveyance of the crude oil is now progress. He anticipated that within a few months they would bo able to take crude oil from tank steamers lying at their own jetty Grangemouth into the large storage tanks on the refinery site, and thence through the pipe-line to the refinery at Uphall. Not only would this facilitate operations at Uphall, but it would give a substantial saving railway carriage.

Noxious Smells in Uphall District - September 5, 1935 - Sir, - The fumes from the Uphall Oil Works, referred to by "A Sufferer" affect a much wider area than Uphall Parish. They Reach the-Newbridge-Ratho district where I reside. On occasions, even the residents at Ratho Station Road, about five miles from the oil works, get more than a sniff of them. This, I think, points to the fact that there is no mere-incidental "leakage" from the works, but: that a great volume of noxious vapour is allowed to escape into the atmosphere I put it quite moderately when I say that not infrequently the pollution of the air even at such a remote distance from the oil works as Newbridge is such as seriously to disturb one's rest at night, apart from the discomfort caused throughout the daytime. Surely, with modern methods of distilling and refining this menace to public health need not continue, and I hope with "A Sufferer" that the medical authorities of the county will, take some action in the matter. I am, &c. X.

Notice of Closing at End of September - 150 MEN AFFECTED - Scottish Oils (Ltd.) posted notices in Uphall Oil Works yesterday intimating to the workmen there that the works would be closed down at the end of September. Uphall Works were converted in 1920 from a shale oil works into an experimental works for dealing with foreign crude oil. From time to time plants were scrapped as better methods were discovered, and now centralisation at Grangemouth seems desirable. Since 1920 the Uphall Works have been supplied with foreign oil by means of a pipe line laid between Grangemouth and Uphall , and the refined products - petrol, Diesel oil, &c . - were distributed by motor tanks to all parts of the country. EXTENSIONS AT GRANGEMOUTH - This action on the part of the Company will affect something like 150 men. In view Of the large extensions known to have been proceeding at Grangemouth for a considerable time, the news has not been altogether unexpected. The hope that work for a number of the displaced workmen may be found at Grangemouth is believed to be a slender one, owing to the capacity of the new and improved plants established.

It was reported that on 6th October, 1924, Grant of Servitude by the Marquis of Linlithgow with the consent of the Hopetoun Estate Development Company and the Marchioness of Linlitbgow in connection with the pipeline from Grangemouth to Uphall was executed on behalf of the Company, which was confirmed.

It was reported that on 15th October, 1924, Grant of Servitude by the Earl of Buchan and others in connection with the pipeline through the lands of Strathbrock was executed on behalf of the Company, which was confirmed.