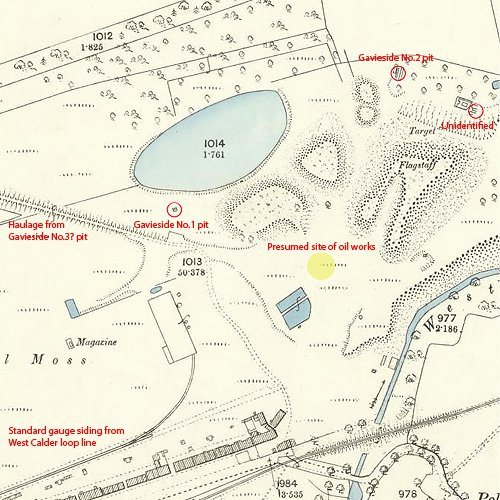 A substantial oil works and one of the first to be built in the West Calder area; sometimes refered to as the West Calder Oil Works, or Fell's Works after A.M. Fell, the first manager. Served by at least three pits in the vicinity of the works, the company also held mineral rights at Cobbinshaw. A limited company, West Calder Oil Company Ltd was established in 1872 to take forward the business, but went into liquidation in 1878.

Gavieside village was built to house the workforce and was purchased, along with the mineral rights, by Young's Paraffin Light & Mineral Oil Company Ltd following the bankruptcy of the West Calder Oil Company. Redwood notes that West Calder Oil Works operated between 1862 and 1879 and that it was bought by Young's Company in 1869 (sic) then pulled down.

Redwood also notes that "This work was originally intended for crude oil business only, but after a few years of prosperity, the company launched out into the refining business also. This move was the principal cause of the downfall of the company, because the market value of finished products fell to such an extent, just when the refinery was ready to start, the anticipated returns from the money invested in the refining plant were never realised. The company failed in 1879 and its work was bought by Young's Paraffin Light and Mineral Oil Company, who pulled down all the apparatus that was of any worth, and transferred it to their Addiewell and Bathgate Works."

No map showing the layout of the works is known to survive. The 1895 OS map shows a site cleared of most features other that a bing spilling down to the banks of the Breich water, and a pool presumably created to hold cooling water. A mineral railway to Gavieside No.40 mine was subsequently built across the site.

Mapped by the Ordnance Survey of c.1895, with the site of the works marked in yellow. 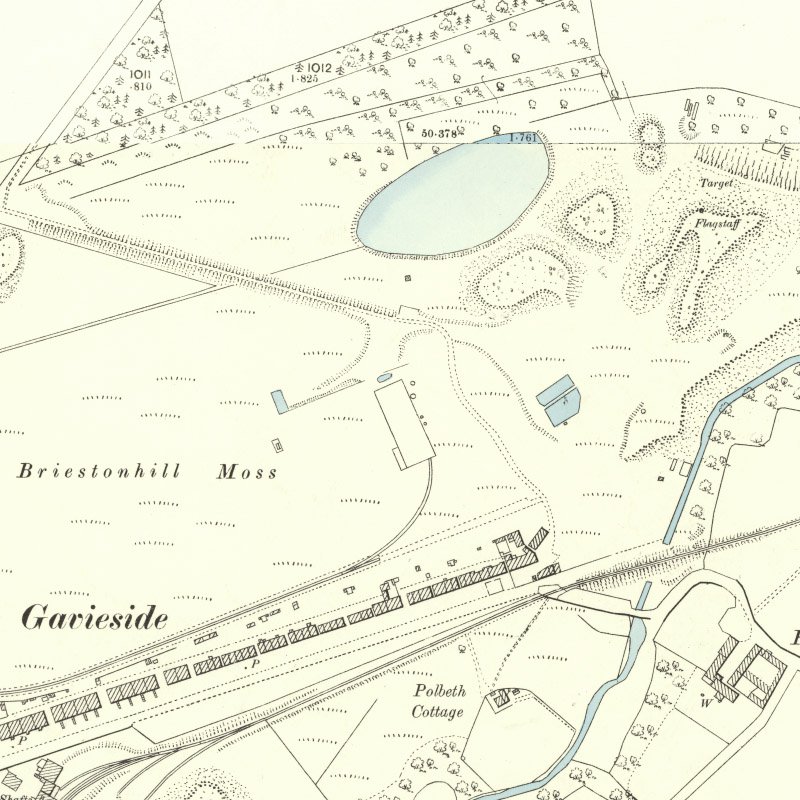 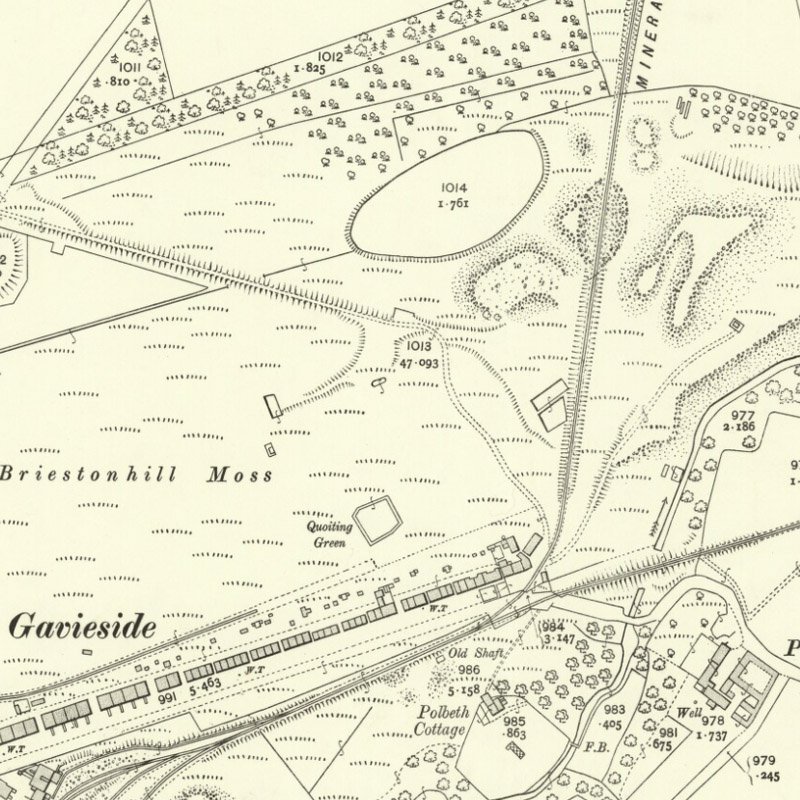 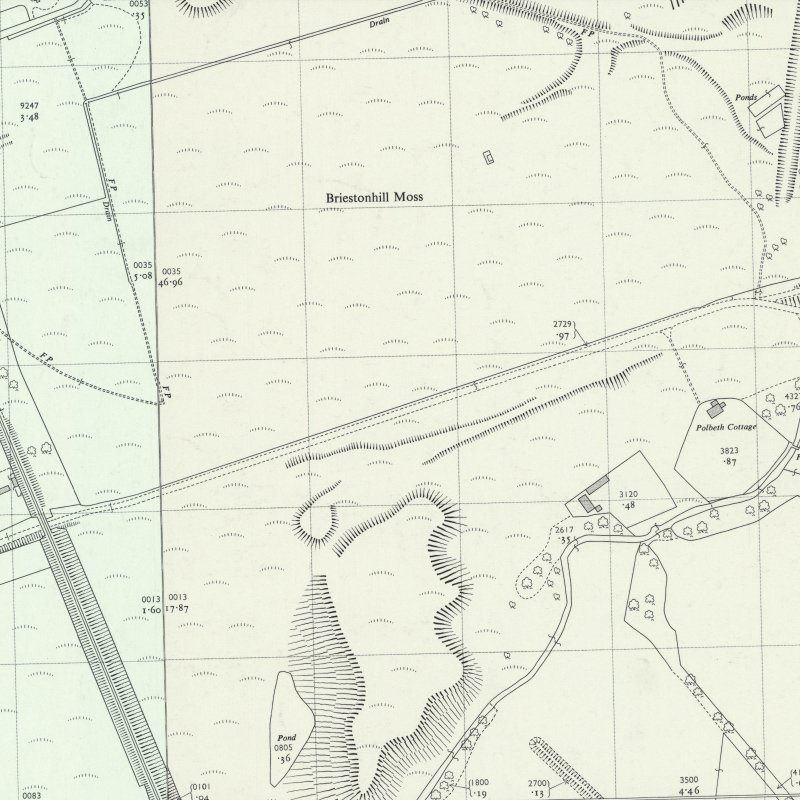 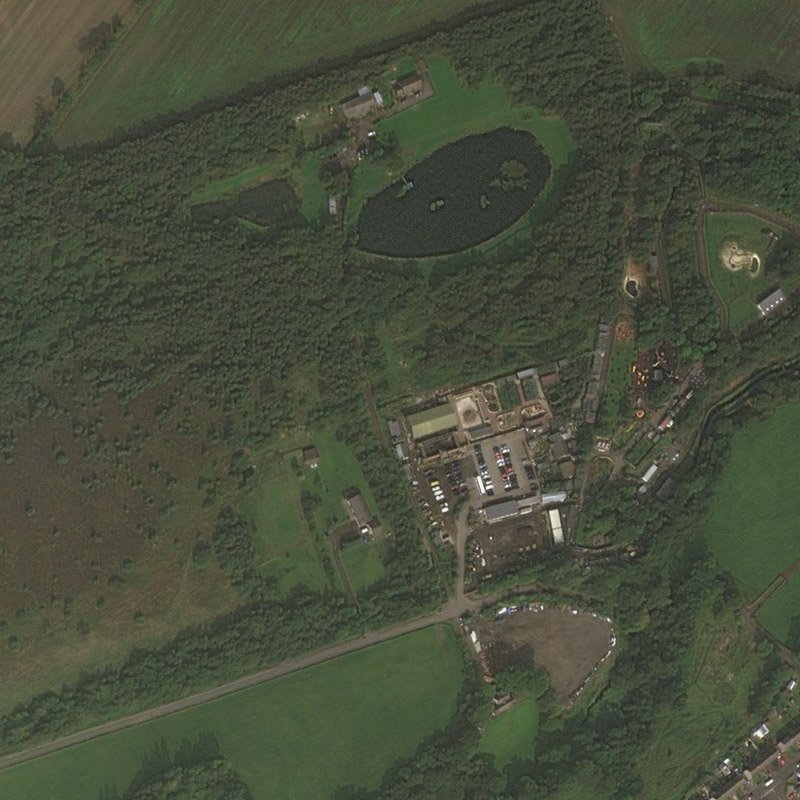 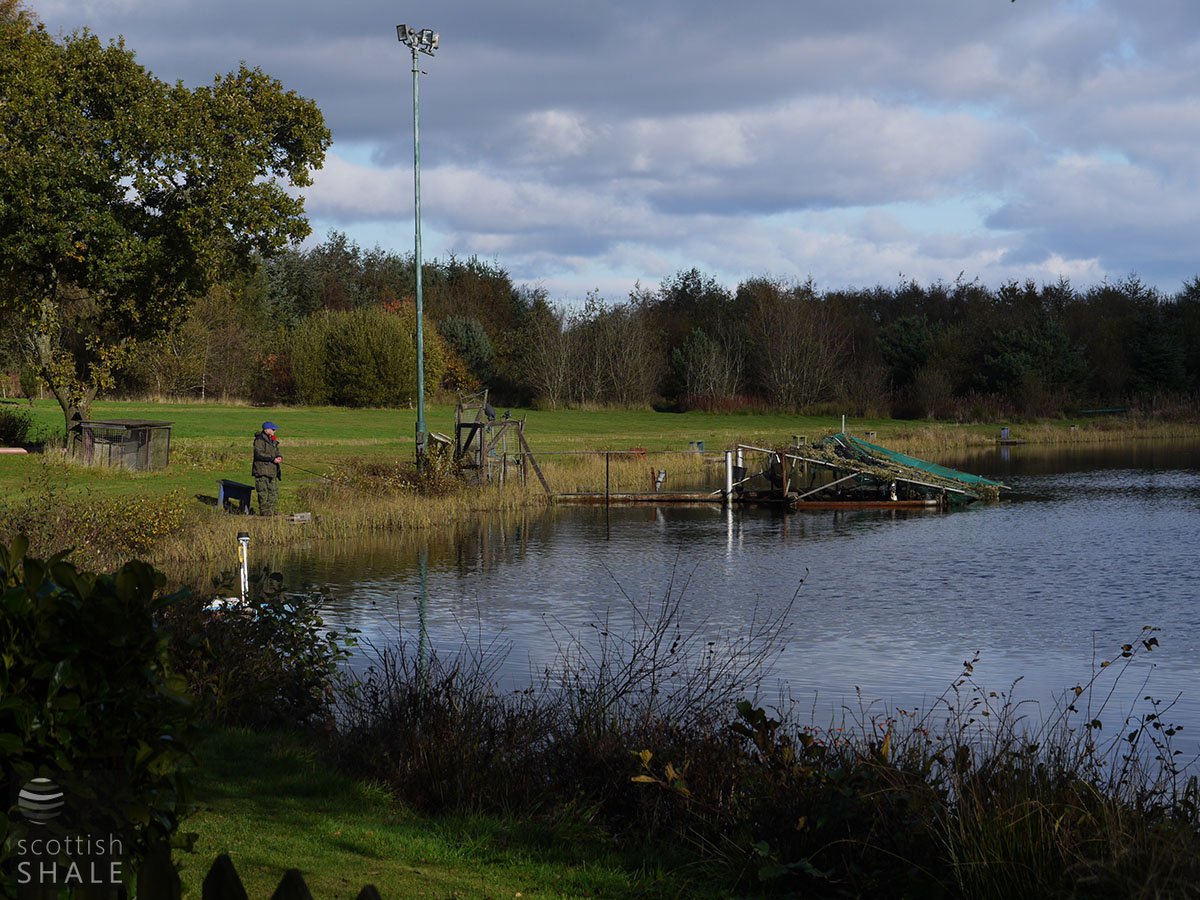 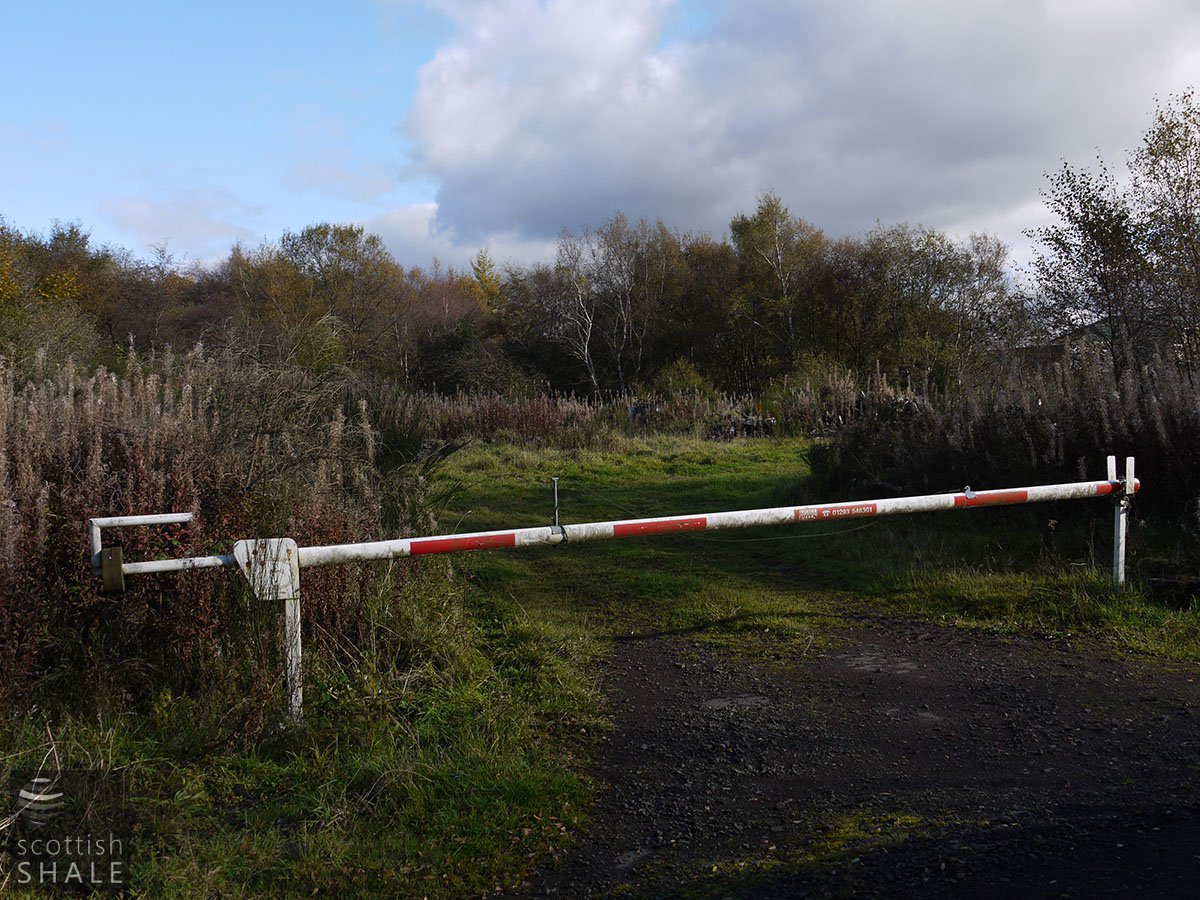 A fire broke out on Wednesday morning in the West Calder Oil Works, managed by Mr. A. M. Fell. The fire was first observed about seven o'clock on Wednesday morning. It appears that the men, in order that a pressing demand for oil should be supplied, went to work at an earlier hour than usual. After operations had proceeded for some time, it was observed that a certain pump was not working properly, and one of the persons engaged in this department, noticing the defect, and fearing that the "well" might overflow, went into the refined oil store with a policeman's lamp to see that all was right. Almost immediately after this, and while this workman was standing on the premises, the oil in the tanks began to blaze, and the man was singed about the face by the flame. It is supposed that the vapour, or gas, arising from the oil at a certain temperature, had been ignited by the lantern, and hence the fire. It should be stated that, in the ordinary course of matters, no lamps are aloud near the vicinity of the oil, whatever light required being supplied – through the medium of reflectors – from lamps fixed at a considerable distance, out of the reach of any possibility of their causing danger or disaster. At first the fire wore so alarming an aspect that it was feared the whole premises, covering nearly ten acres, would be destroyed. To have poured water upon the building would simply have added "fuel to the flame," and it was found that the French patent extinguisher upon the place took too long a time to "charge" to be of much use in such an extreme emergency. Fortunately, there was a large number of the workpeople at hand, and through their strenuous, and in some cases daring, exertions in throwing sand and pouring sulphuric acid upon the burning liquid, they managed to confine the fire to the house in which it first broke out, and the flames were completely subdued by eleven o'clock in the afternoon. Underneath one of the store tanks was chained a fine watch dog belonging to Mr. Fell, who happened to be at Glasgow on Wednesday, and in endeavouring to save the animal, one of the principal workmen, noticing that the tap allow the flow of oil from a large tubular tank was shut, immediately turned it so as to admit of the oil running off. Had he not done so, in all probability the boiler or tank would have exploded and carried the flames into the other parts of the work. He was not, however, successful in saving the poor dog (the fire being too hot), which was burned to death. This, however, was, we are happy to say, the only casualty. Had it not been that every precaution has been taken by the proprietors first to guard against fire, and, in the event of its breaking out, to prevent its spread beyond the locality in which it first appeared – all communication being shut off by fire-proof walls and doors between one department and another – the chances are that the loss would have been very serious. As it is, about 7000 gallons of oil were consumed, the store house, roof and walls, were reduced to a shapeless mass, and the iron tanks have suffered much from the calamity. The damage cannot yet be accurately ascertained, but it is estimated at about from £1500 to £2000. We understand it is covered by insurance.

The Gavieside, or West-Calder Oil Company, was founded in 1862; and at this establishment the appliances for working up the matter left after the extraction of the oil from the shale is most complete. The works contain about 100 retorts and between 200 and 300 men are employed.

WEST CALDER PARAFFIN OIL WORKS, for sale as a going concern. For sale by public roup on Friday 25th may at 2 o'clock Afternoon at the Faculty Hall, St Georges Place, Glasgow, the MINERAL OIL MANUFACTURING WORKS of the WEST CALDER OIL COMPANY LIMITED, with COAL and SHALE PITS and all relative leases. The pits at Gavieside are in good working order with a command of Shale at the very best quality, and which can be raised at low cost. The Cobbinshaw Field, which is estimated to contain over Four Million Tons of Shale, is one of the finest in the Kingdom. The Machinery and Buildings as Gavieside are to a large extent of recent construction, and the appliances are of the most modern and approved description. They include Retorts for the Manufacture of Crude Oil; Stills, Washers, &c., for the Manufacture and Refining of Burning and Lubricating Oils; Plant for the Freezing and Pressing of Crude Paraffin and for the Manufacture of Sulphate of Ammonia. There are Counting-House, Stores, Stables, Workshops, &c., provided with all necessary Fittings; also a School-House, Manager's House, and Workmen's Dwellings – all in good condition. The Refinery is at present capable of working over Two Million Gallons of Crude Oil per Annum, and with a small outlay could be made to accomplish about a half more. Upset Price, £40,000.

The West Calder oil works, pits, leases &c., which originally cost upwards of £100,000, have been acquired for the sum of £17,752, 10s. 8d. It is not intended to resume manufacturing operations at these works, but to transfer to Addiewell and Bathgate such plant as is suitable for the Company's purposes, and to dispose of the remainder. Annual Report of Young's Paraffin Light & Mineral Oil Company Ltd.