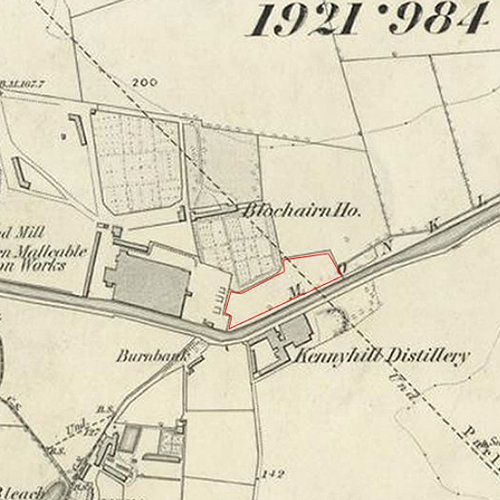 Evidence suggests that Blochairn Chemical Works were established to refine coal tars and imported petroleum, but increasingly focussed on the refining of Scottish paraffin oils and was latterly known as Blochairn Oil Works. There is no indication that coal or shale was retorted on site. The works are not listed by Redwood.

In 1870 Blochairn Chemical Works and their senior proprietor Robert Binning were subject of a lengthy court case in which the local parish board alleged that the works produced "a disgusting, nasty, loathsome, and nauseous smell". As a consequence, a ban was imposed on the works burning paraffin coke as a fuel. Robert and John Binning, the sole partners in Robert Binning & Son, were also copartners in the Clippens Shale Oil Company, concerned with the development of Clippens Oil Works.

The Machinery and Plant of Blochairn Oil Works were sold off in 1873 and it seems likely that the site was subsequently subsumed into that of Blochairn Steel Works, constructed by the Steel Company of Scotland during the 1880's. Little trace survives of this industrial landscape; the steel works closed in 1958 and its site is now occupied by Blochairn Market and other commercial premises. The Monkland Canal was infilled in advance of the construction of the M8 Monkland Motorway in about 1980.

The works, sited on Garngad Hill Road, cannot be clearly identified from available OS maps; the suggested location is derived from the description in the sales notice that the works were "immediately east of Blochairn Iron Works".

Mapped by the Ordnance Survey of c.1865, with possible site of oil works marked in red. 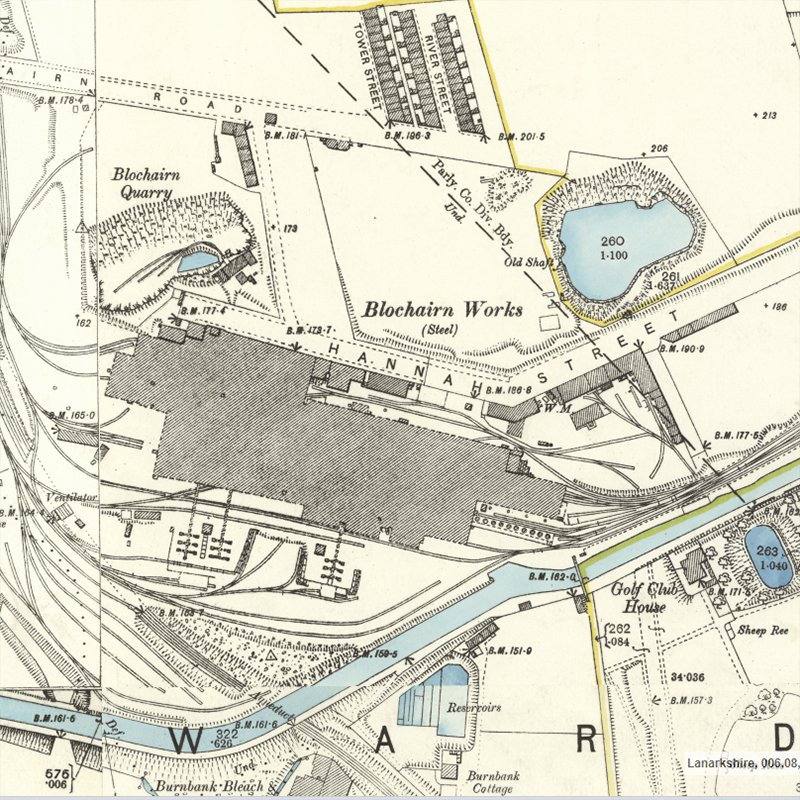 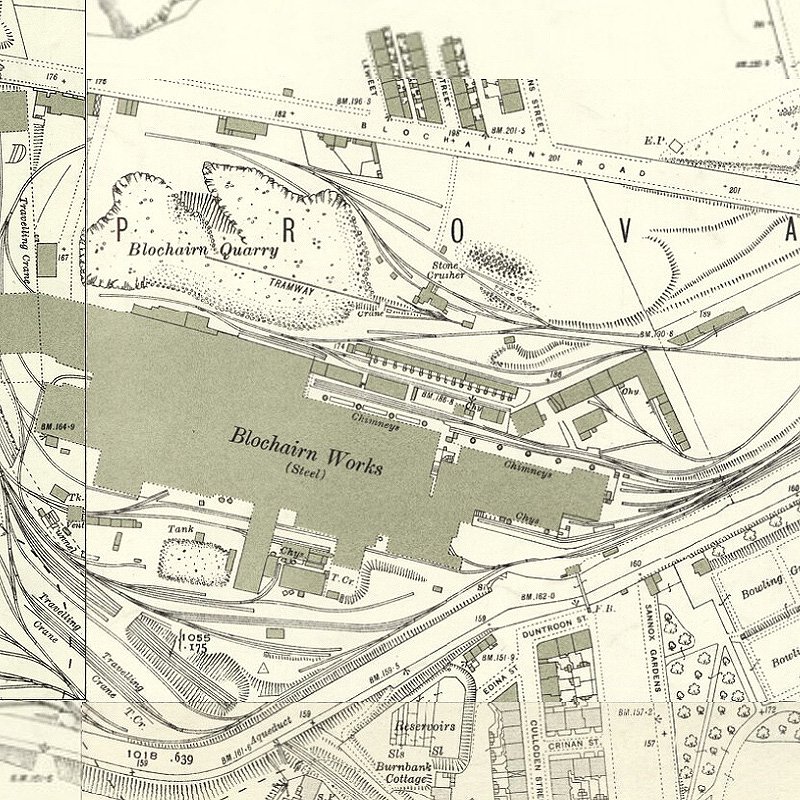 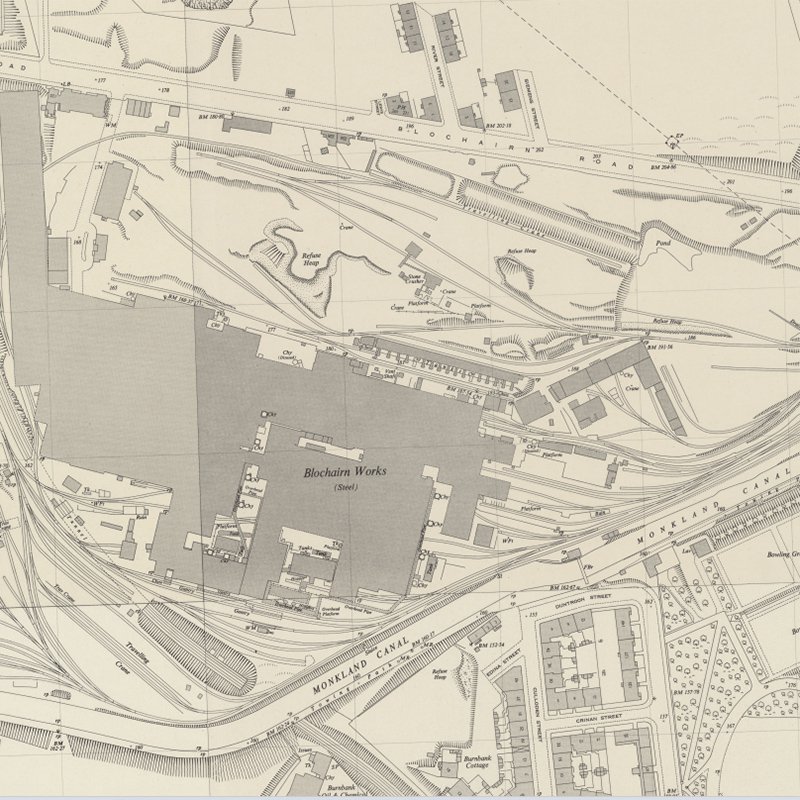 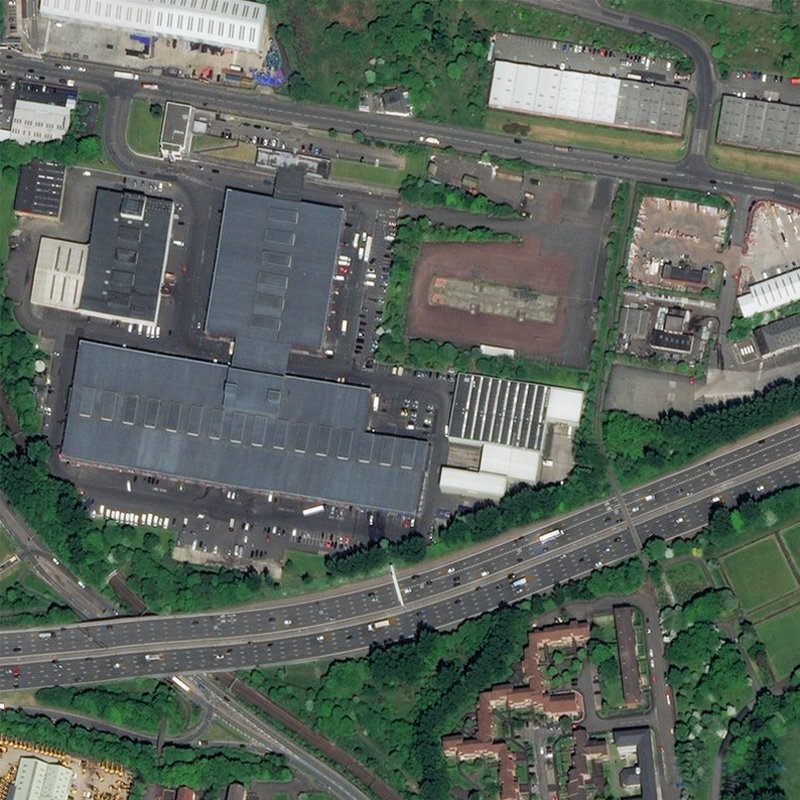 Detail of postcard, c.1910 showing the view across Alexandra Park towards Blochairn Steelworks, which were constructed on the site of Blochairn Chemical Works. 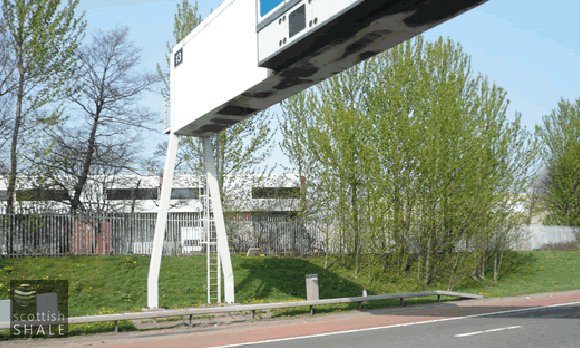 In this action the pursuers, merchants and commission agents in Liverpool sued Binning & Son, coal-tar and petroleum distillers, Blochairn, near Glasgow...

Yesterday Sheriff Bell pronounced decision in an action at the instance of the Barony Parochial Board, Glasgow, as Local Authority under the Public Health (Scotland) Act 1862, against R. Binning & Sons, paraffin oil and coal-gas distillers, Blochairn Chemical Works. The petitioners set forth that an effluvia, offensive and injurious to health, was emitted by the works of Messrs. Binning, and asked his Lordship to ordain the respondents to discontinue the nuisance complained of.

The GROUND on which the Works stand will be SOLD by Private Bargain. It is outwith the Municipal Boundary, and lies immediately East of Blochairn Iron Works, and it extends to Three Acres Two Roods and Four Poles. It adjoins the Banks of the Forth and Clyde Canal, the intervening Ground being held on Lease by the Proprietors. Feu-duty, £105, 16s. 10d. AN OMNIBUS will leave the Exchange, Queen Street at a Quarter to One on 12th FEBRUARY, and Convey Purchasers to Blochairn. Catalogues of the Machinery and Plant will be Furnished by Mr. ROBERT BINNING, Clippens Shale Oil Company.

The condensed water separated from the tar after removal of naphtha is evaporated. The spent sulphuric acid, and the spent caustic soda, and tarry matter, after first and second purifying processes are recovered, and the tar is burnt. The other liquid refuse produced flows into the stream. The spent shale is deposited in heaps near the pits. Use steam, 25 nominal horse-power. Consume yearly 8,000 tons of coal, the ashes from which are deposited in heaps. The excrements of our workpeople are carted away and used for manure.

Have no suggestions to offer.