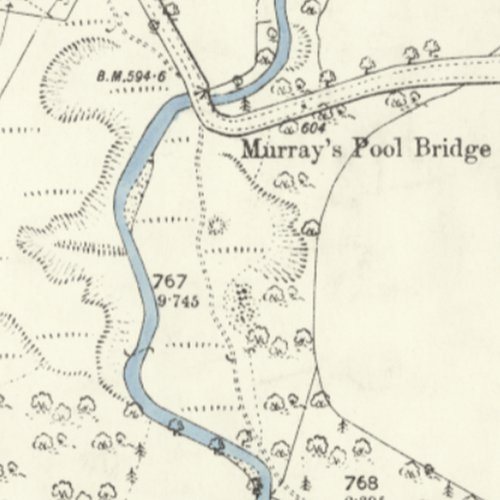 Redwood lists an oil works at Hermand that was operated by Thornton between 1864 and 1870. This seems likely to be the "Hermand Shale Oil Works" which valuation rolls record were owned by Thomas and James Thornton between 1867 and 1875. Two other oil works are known to have operated within the Hermand estate; the East Hermand Crude Oil Works (in existence between 1866 and 1873) and the Hermand Oil Works (in existence between c.1883 and 1894).

The location of the Hermand Shale Oil Works is not plotted on any known map, but seem likely to have been sited close to Hermand Old Rows that the Thornton Brothers constructed during the 1860's to house their workforce.

A succession of grassed promontories project into the valley on the west side of the Harwood Water at a site south of Murray's Pool bridge, and about 150m from the site of Hermand Old Rows. Where the grass has eroded it can be seen that this landform is composed of "red blaes" (spent shale) and seem likely to have been tip points where hutches of spent shale from a nearby oil works would be tipped into the river valley. The second edition OS map (c.1893), surveyed following closure of the works, shows the landform much as it exists today. The first edition OS map (c.1858) however shows that the Harwood Water once followed a very different course and seems to have been diverted as a consequence of tipping spent shale and other industrial activity.

Between the promontories, an earthwork following an even grade up the steep slope from the river can still be discerned. This feature is also marked on the 1893 OS map. Evidence on the ground suggest that shale was worked from an adit on the east of the Harwood Water (See Hermand Murray's Pool mine) then moved a short distance to the foot of a tramway incline from where it would be hauled on a bridge across the river and then up the valley side. The earthworks at the top of the incline are now obscured, suggesting that the land in this area was regraded following demolition of the oil works. 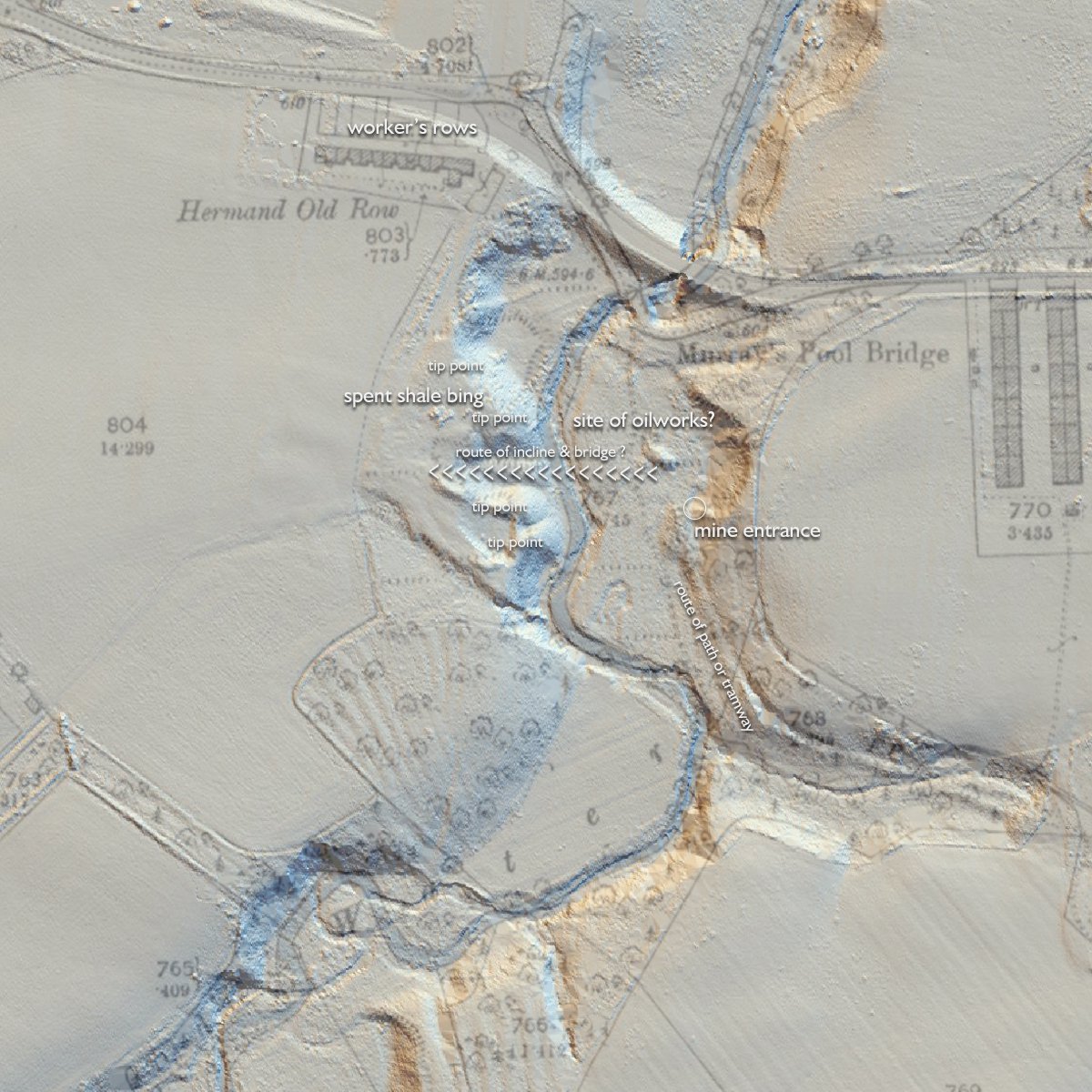 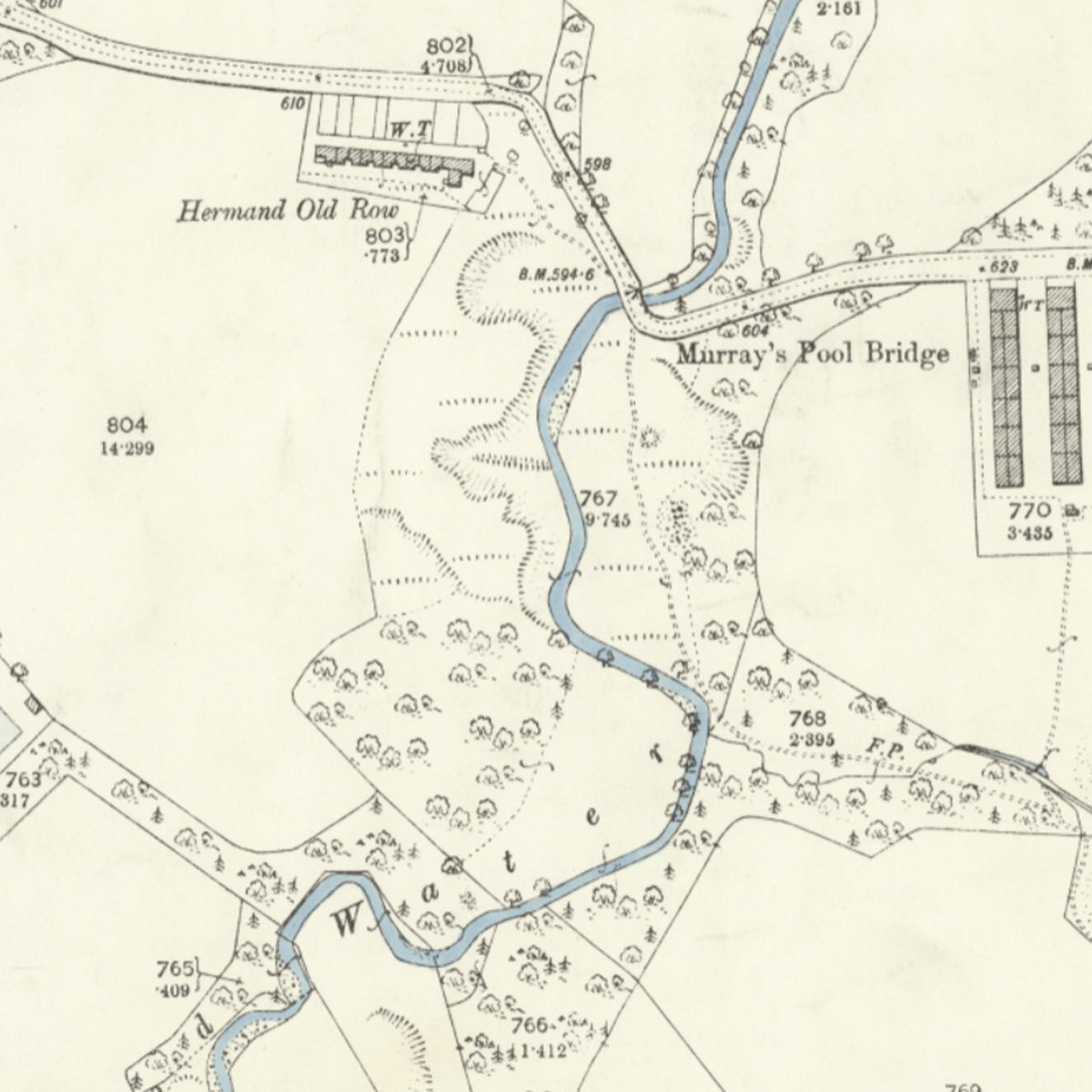 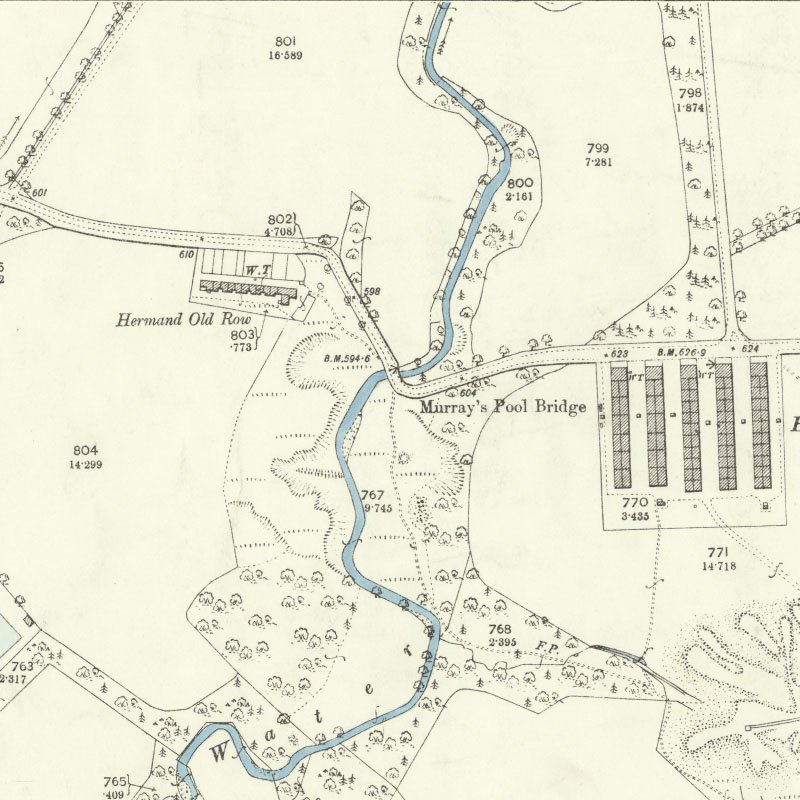 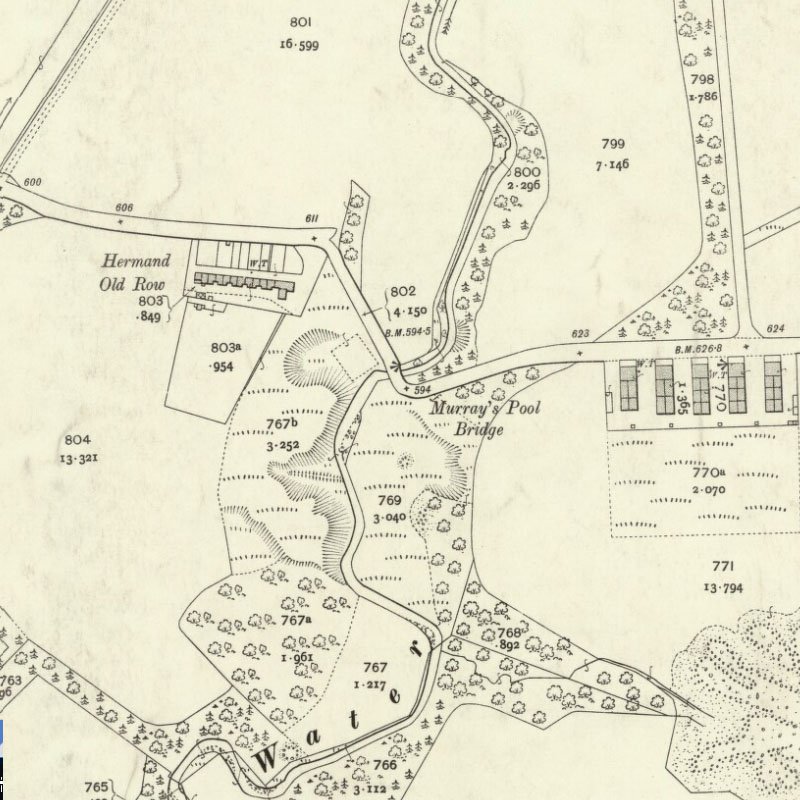 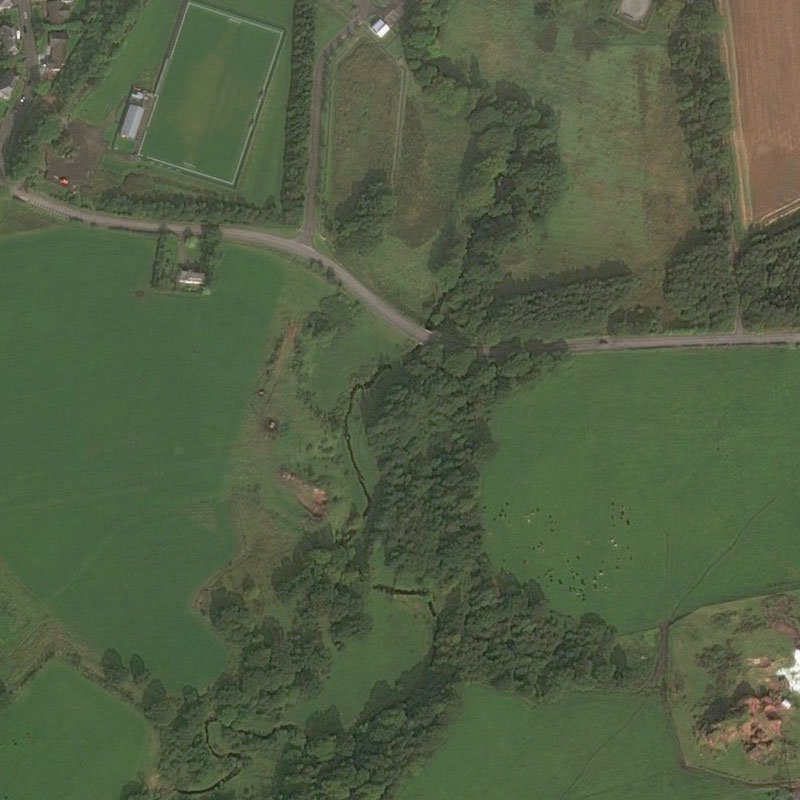 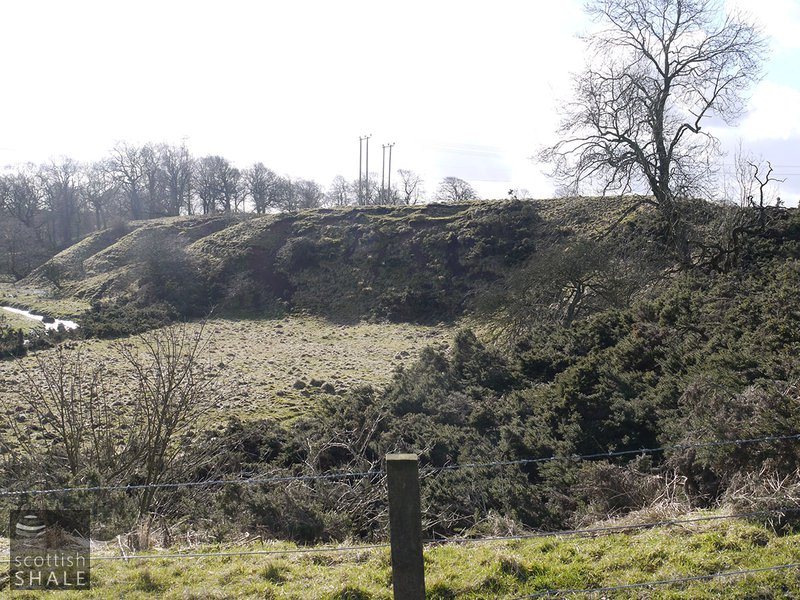 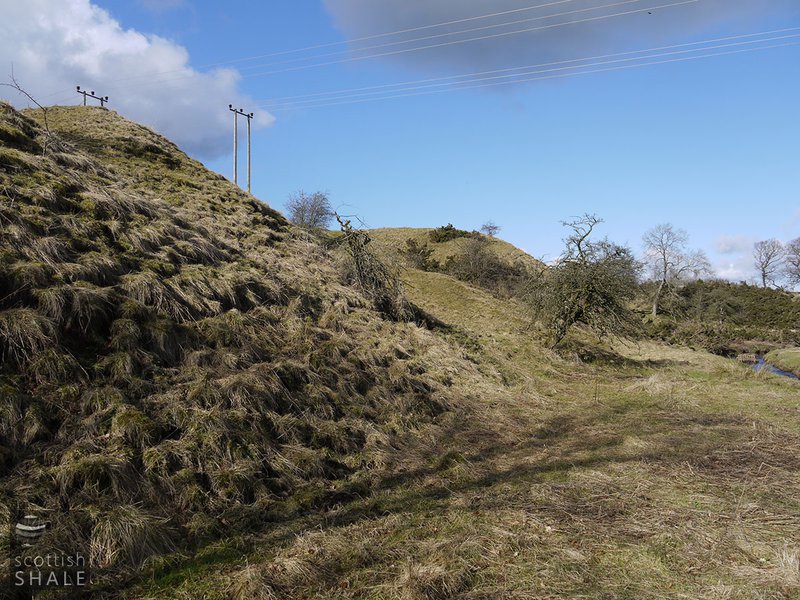 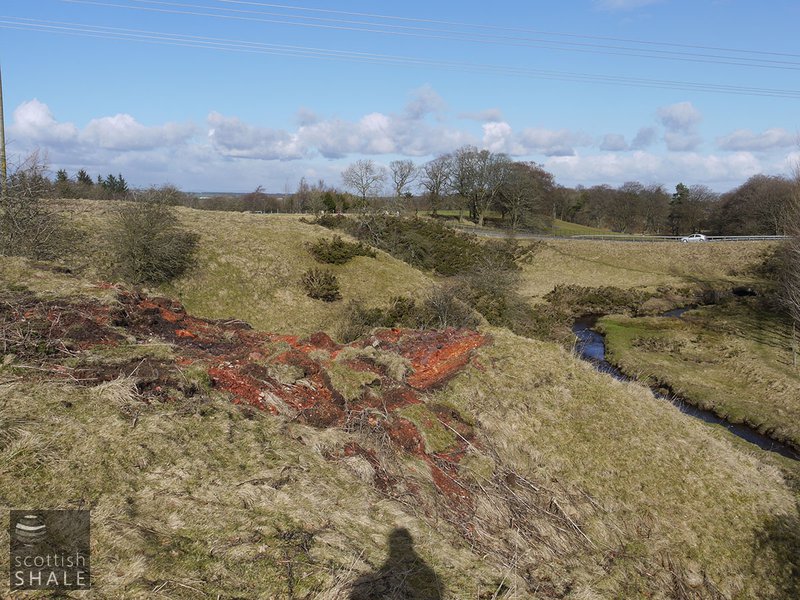 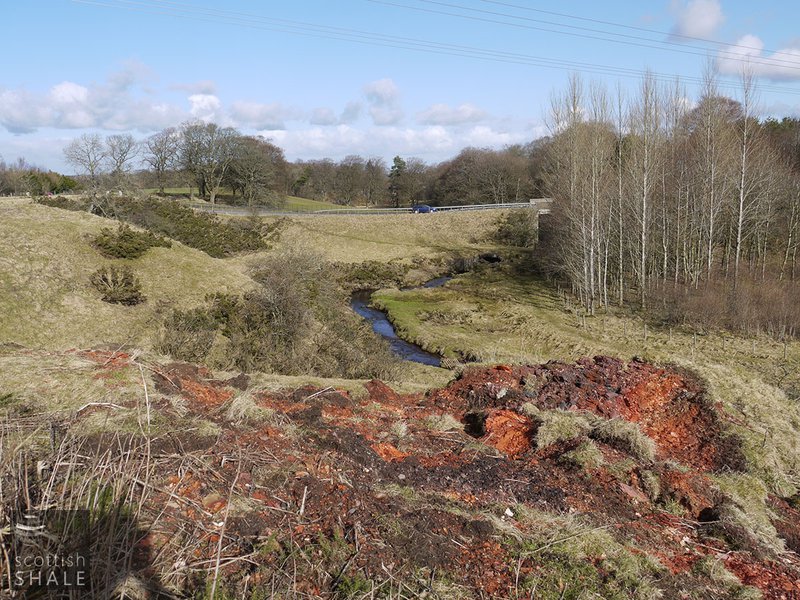