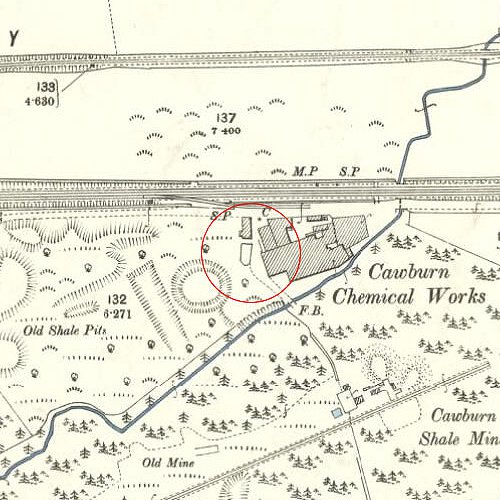 Surprisingly, not listed by Redwood.

An undated mining plan shows workings by Wm Fraser and Wm Fraser Junior near Cawburn, and also outlines surface buildings, presumably retorts and other oil works structures. This suggests that the site of the Roman Camp Shale Oil Works was subsequently developed as Cawburn Chemical Works.

When put up for sale in 1866 (see snippets) the works were described as having 78 retorts, a refinery, a shale pit (perhaps associated with Cawburn mine) a brickworks, and a manager's house. Presumably no buyers were found as the works were put on the market again in 1867.

The works appear to have been purchased c.1869 by Dr. James Steele, (who also owned works in Broxburn and Stewartfield), in partnership with David Hamilton. This business arrangement proved short-lived (Dr Steele had his partner imprisoned!), the works were put up for sale again in 1871 and, failing to find a buyer, the plant was sold off in 1872.

Mapped by the Ordnance Survey of c.1897, showing the location of the works marked in red. 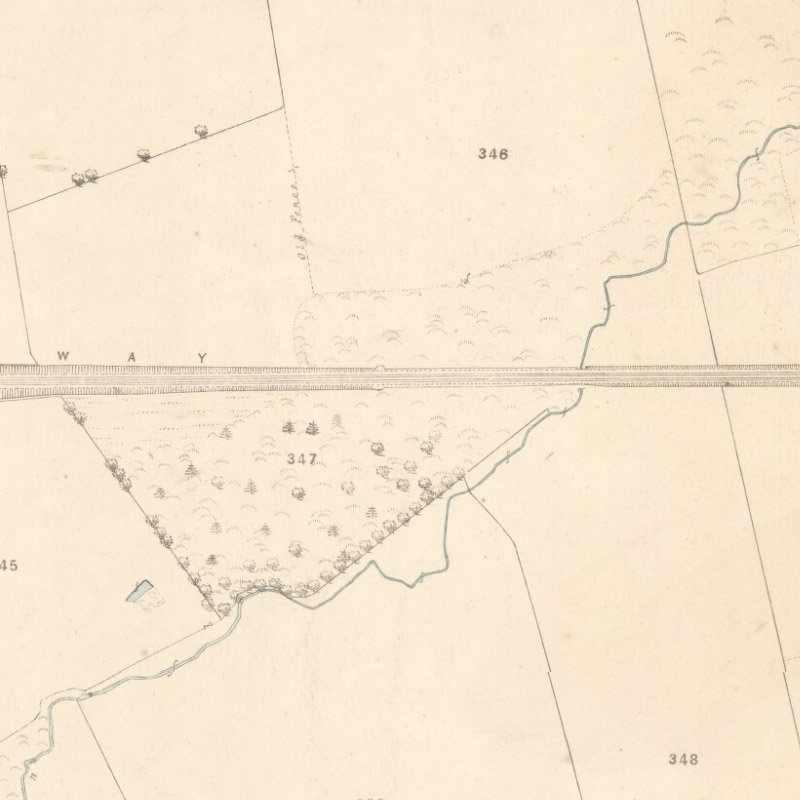 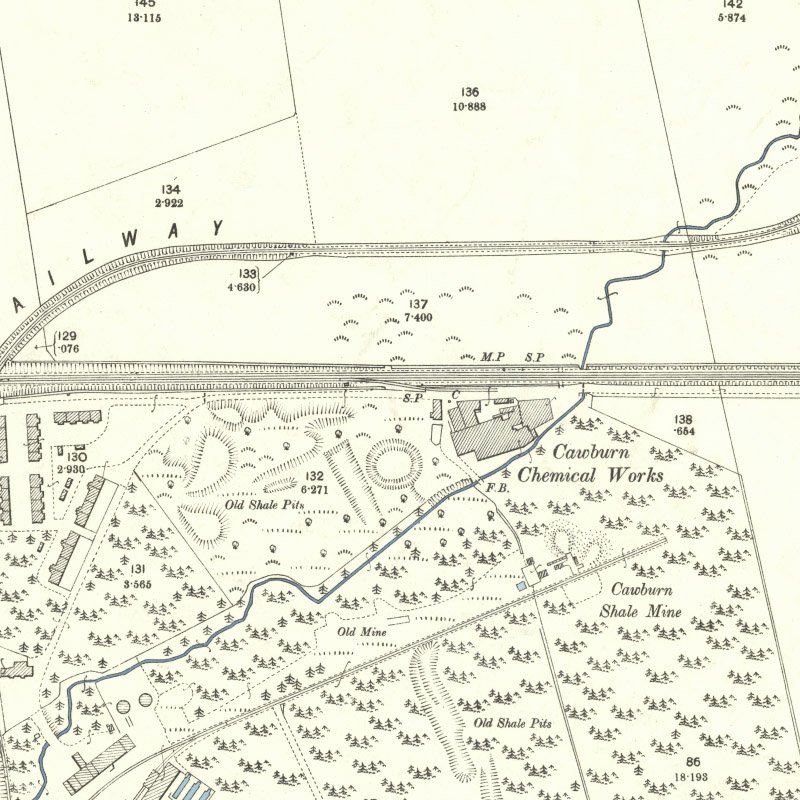 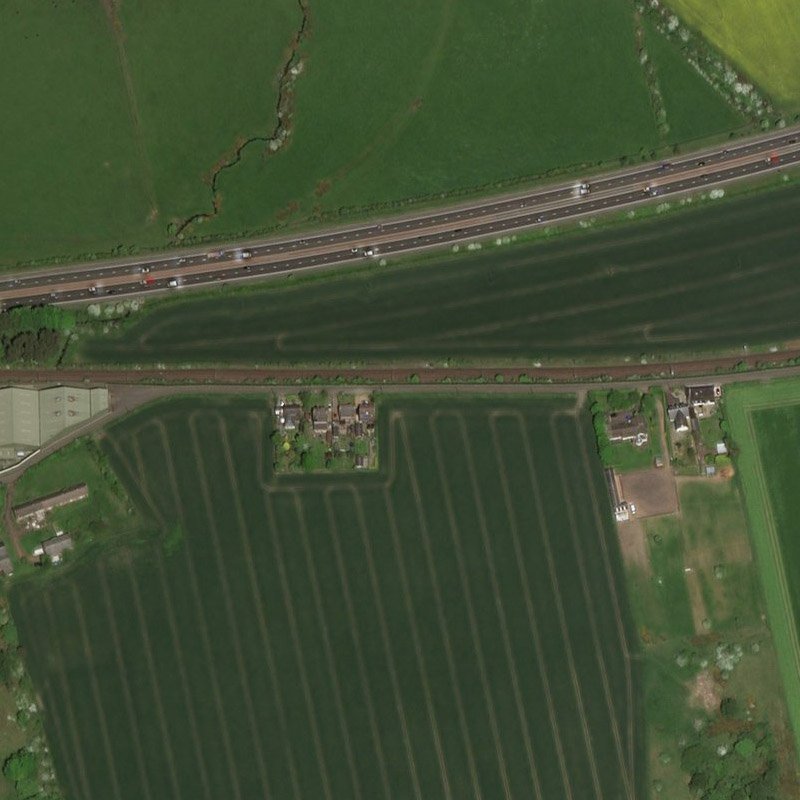 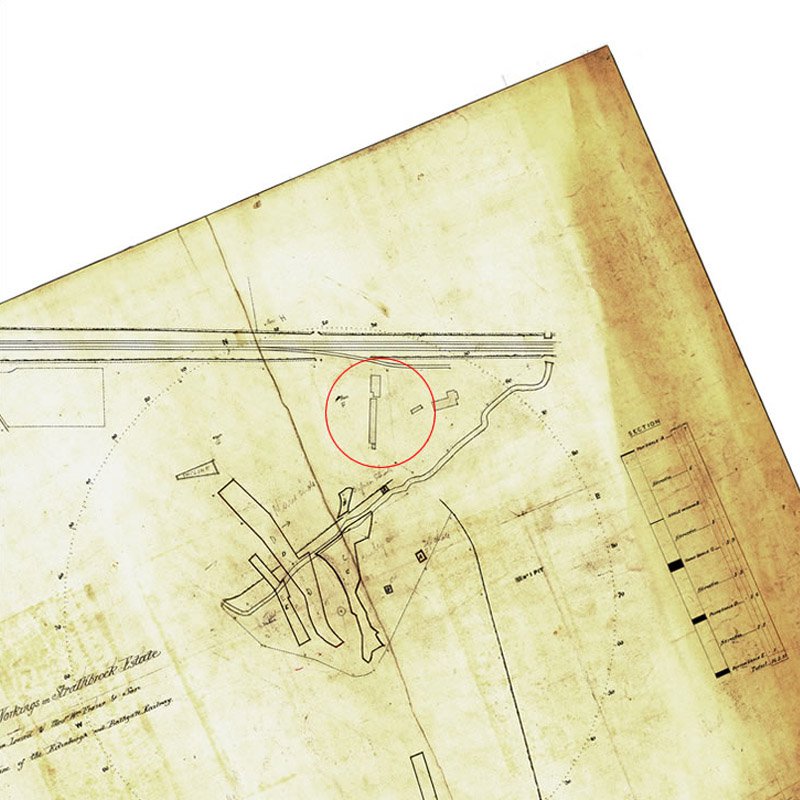 The Copartnership carried on by the Subscribers, WILLIAM FRASER, Junior, and JAMES MEIKLE, as Manufacturers of Paraffin Oil, &c., near Broxburn, was DISSOLVED of this date, by mutual consent. The debts due by and to the said Firm will be paid and uplifted by the said William Fraser, Junior. THE Business will be carried on as formerly by the said William Fraser, Junior, solely. J. MEIKLE, WM. FRASER, Jr.. Edinburgh, January 6, 1865.

On Saturday evening, about 7 o'clock, a man named Hugh Elyon, 52 years of age, residing in Broxburn, was employed at his usual avocation in the Roman Company's Oil Works near that place, when a still containing crude mineral oil, which appears to have been over-heated, suddenly exploded and burned the poor fellow so severely that he died Monday morning from the injuries sustained.

The Society's sixth excursion for the season came off on Saturday, but owing to the inclemency of the weather, very few of the members turned out. They proceeded by the 12.45 train to Broxburn, intending to visit some of the principal shale works in the neighborhood, but the rain prevented them getting any further than Mr. Fraser's Roman Camp Shale Works. There, however, under the guidance of Mr. Andrew Taylor, one of the society's members, they had an opportunity of seeing the various processes of distillation, and noting the different changes the shale undergoes in its manufacture – from raw material to the "crude oil", mineral spirit, paraffine oil, solid paraffine and lubricating oil respectively. They returned afterwards by the 2.10 train to Edinburgh.

VALUABLE CRUDE SHALE OIL AND REFINING AT BROXBURN FOR SALE.

To be SOLD by Public Roup, within the Faculty Hall, Glasgow, on Tuesday 18th December, at Twelve o'clock noon (if not previously Disposed of by Private Bargain). THE RIGHT and INTEREST in a LEASE of 133 Acres of LAND at the ROMAN CAMP, near BROXBURN, for Nineteen Years from Martinmas 1864, with a break in favour of the tenant at Martinmas 1867, Martinmas 1870 and Martinmas 1876, held under the Trustees of Lord Buchan. The Works are known as "THE ROMAN CAMP OILWORKS, BROXBURN." They consist of a Shale Pit and Mine, with Engines and Winding Machinery complete and in perfect order. There are Seventy-Eight Horizontal Retorts, with all the fittings necessary for the manufacture of oil. There is also a Refinery of Five Stills with Two Washers, Engine, &c., attached. Besides these, a Brick-Work of Two Pan-Mills, Engine and Boiler complete, as well as a Manager's House, have been erected, and also a Blacksmith's Shop and other conveniences. The shale is most abundant and the oil produced is of first-rate quality. The Landlords will, if satisfied with the proposed purchaser, interpose no obstacles beyond the fair protection of rights, in the way of a transfer. There is a Siding from the adjacent line of the North British Railway into the Works. For further particulars apply at the Works, or to Messrs J. & J. GARDINER, S.S.C., 16 Hanover Street, Edinburgh.

UPSET PRICE £2,500. To be SOLD by Public Roup, within Messrs Gay & Black's Rooms, No. 65A George Street Edinburgh, on Wednesday the 6th November, at One o'clock Afternoon (if not previously Disposed of by Private Bargain) The INTEREST of the PRESENT TENANT in the unexpired Period of the LEASE of a SHALEFIELD near BROXBURN, granted by the Trustees of the Earl of Buchan to Messrs William Fraser and William Fraser. Jun. For Nineteen Years, from Martinmas 1864, together with the Whole BUILDINGS, HOUSES, and WORKS. MACHINERY, ENGINES, RETORTS, PIT FITTINGS. PLANT, and ROLLING STOCK at the Work known as the Roman Camp Oil Work, which the Shale Field adjoins. The offerer to be preferred must arrange with the Landlords to accept him as an Assignee under the Lease. For further particulars apply to ADAM GILLIES SMITH, Esq., 59 George Street, Edinburgh; or to Messrs J. & J. GARDINER.

I, JAMES STEELE M.D. Wishaw; hereby intimate that I AM NOT RESPONSIBLE for any DEBTS and OBLIGATIONS incurred by DAVID HAMILTON, Shale Oil Distiller and Refiner, Roman Camp Works, Broxburn from since the 1st day of February 1870.

Court of Session OUTER HOUSE . (Before Lord Ormidale) SUSP. HAMILTON v. STEELE. This is a suspension and liberation at the instance of David Hamilton, shale oil manufacturer, Roman Camp, Broxburn , against James Steele, doctor of medicine . Wishaw, by which the complainer seeks to have suspended an extract registered protest proceeding on a bill for £ 300, dated 17th March 1870, drawn by the respondent upon and accepted by the complainer and payable three months after date, and in respect of which the complainer was, upon 14th October last, incarcerated in the prison of Edinburgh by the respondent . The complainer presented this note of suspension and liberation, alleging that the respondent is his partner in the oil works at Roman Camp, Broxburn, the business of which was carried on under the name of the complainer and that the bill for £ 300 was truly an advance to the capital of the concern by the respondent, and not a personal debt, as alleged by him.

JAMES WINK, C.A., Glasgow, has been appointed by the Court of Session Judicial Factor on the Copartnery carrying on business as Shale Oil Manufacturers at the 'Roman Camp Works," Broxburn, under the Name of DAVID HAMILTON, or DAVID HAMILTON & CO. All Persons having Claims against the said Copartnery are requested to send statements thereof to the Subscribers before 1st October proximo. MITCHELL, WATSON, & WINK. 4, National Bank Buildings, Glasgow, September 1, 1871.

There will be Exposed for SALE by Public Auction, by James Wink, C.A., Judicial Factor appointed to wind up the Facility Hall, St. George's Place, Glasgow, on Wednesday the 20th December 1871, at Two o'clock P.M. THE LEASE, BUILDINGS, MACHINERY, and UTENSILS of the ROMAN CAMP SHALE OIL-WORKS near BROXBURN, belonging to James Steel M.D., Wishaw, and David Hamilton, Shale Oil Manufacturer at said Works. The Lease comprehends the whole Coal, both Common and Gas Coal, and oil shale and Ironstone within a portion of the Earl of Buchan's Lands of Strathbrock, in the parish of Uphall and the County of Linlithgow, lying to the South of the Edinburgh and Bathgate Railway. The lands extend to about 330 imperial acres and contain the well-know Broxburn Oil Shale in favorable position. The lease is for Seventeen Years from Martinmas 1868 with breaks in favour of the Lesses in 1873, 1876, 1879 and 1882. The fixed rent is £150 per annum, or, in the opinion of the landlord, a lordship on Shale of one-tenth of the value realised by the Lessee, and moderate lordships on other minerals. The Machinery consists both of Mining and Manufacturing Machinery, of which an Inventory and Valuation had been made (the latter amounting to £2,800.) There are Fifty-one Horizontal Retorts, and the necessary Apparatus for Refining their produce. The whole subjects will be exposed for Sale in One Lot, at an Upset Price to be stated in future advertisements. Orders to inspect the works may be obtained from the Judicial Factor, and intending offerers are referred for further particulars to J.A. DIXON, Writer, 156 West George Street, Glasgow; or to JAMES WINK, C.A., of Messrs Mitchell, Watson & Wink, 4 National Bank Buildings, Glasgow, the Judicial Factor on the Estate.

VALUABLE SHALE OIL WORK PLANT WITH MINERAL LEASE AND WORKMEN'S HOUSES, AT BROXBURN There will be SOLD, within the Facility Hall, St George's Place Glasgow, on Wednesday the 19th June curt., at Two o'clock, the following subjects, in Three Lots ;- I. The ROMAN CAMP SHALE OIL WORKS.; with MINERAL LEASE. The Plant consists of 78 HORIZONTAL RETORTS, capable of consuming 39 Tons Shale Daily, 4 STEAM ENGINES with Boilers, 6 Stills and Connections, Sulphate of Ammonia Still with Connections, Paraffin Press, Malleable and Cast Rails, Dwelling House, Smith's, Joiner's, and Cooper's Shops, Sulphate of Ammonia House, Store-House; Tool-House, and Refinery Buildings, &c.. The Lands Leased for Minerals extend to about 330 Imperial Acres, and contain 3 workable seams of Shale, the best of which produces, in Vertical Retorts. 32 gallons, and in Horizontal , 28 Gallons per Ton. The Lease has thirteen and a-half years to run, with breaks in the Tenant's favour, at Martinmas 1873 and every third year thereafter. The fixed Rent is £150; and the Lordships in lieu thereof, in the Landlord's opinion, are 1-10th of market value on Oil Shale; and for Common Coal, 6d., and for Dross, 2d. Per ton on 22 cwt. Upset Price, £1,700.