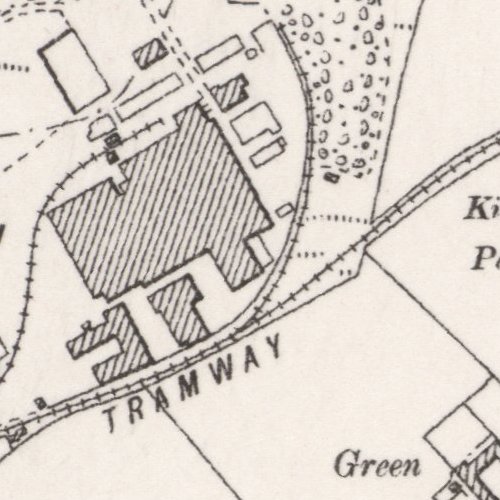 Redwood notes erroneously that Clippens Oil Works was operated by Robert Binney & Son [sic] between 1869 and 1873 and thereafter by Robert Binney [sic] only, with 272 retorts producing crude oil and refining products. He notes that the site was taken over by the Clippens Oil Company in 1880, serving as a refinery only from 1881, and was marked as "still going".

In fact the works were built c.1870 by the Clippens Shale Oil Company; a co partnership of Robert Binning, John Binning, and Thomas Inglis Scott. After financial problems and court case, the business was carried forward by James Scott, father of Thomas Inglis Scott, who then promoted The Clippens Oil Company Ltd. in 1878. In 1876 the oil company took over mines in the area from Messrs. Merry & Cuninghame, until that date, supplies of shale were purchased from that company.

Recognising the limitations of coal-oil production in Renfrewshire, the Clippens Company acquired lease of oil shales at Midlothian in 1879 and began the development of the Pentland Oil Works. Crude oil production then ceased at Clippens, although the refinery remained active until c.1890, processing much of the crude oil produced at Pentland.

OS maps do not record Clippens oil works in operation but, given the large volume of waste material around the site, it is assumed that the Sun Foundry, shown on the 1897 map, occupied the site of the oil works and refinery.

Below: Minerals entry from 1859, Oil works entries from 1870 to 1893. This schedule requires further verification, latter references to Clippens Shale Oil Co. should surely refer to the Clippens Oil Co. Ltd, and the footnote relates to Pentland works. 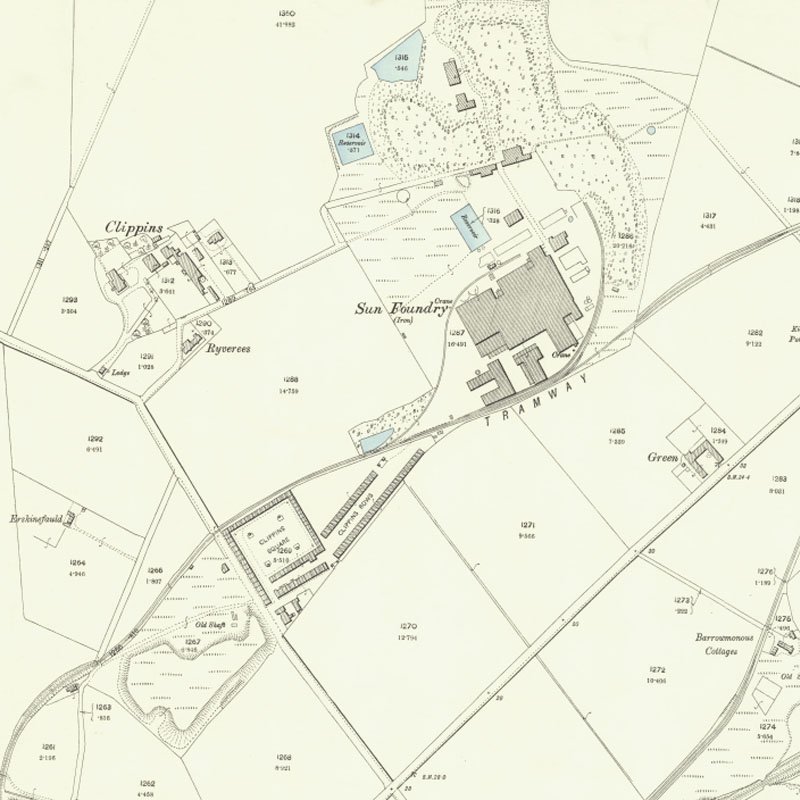 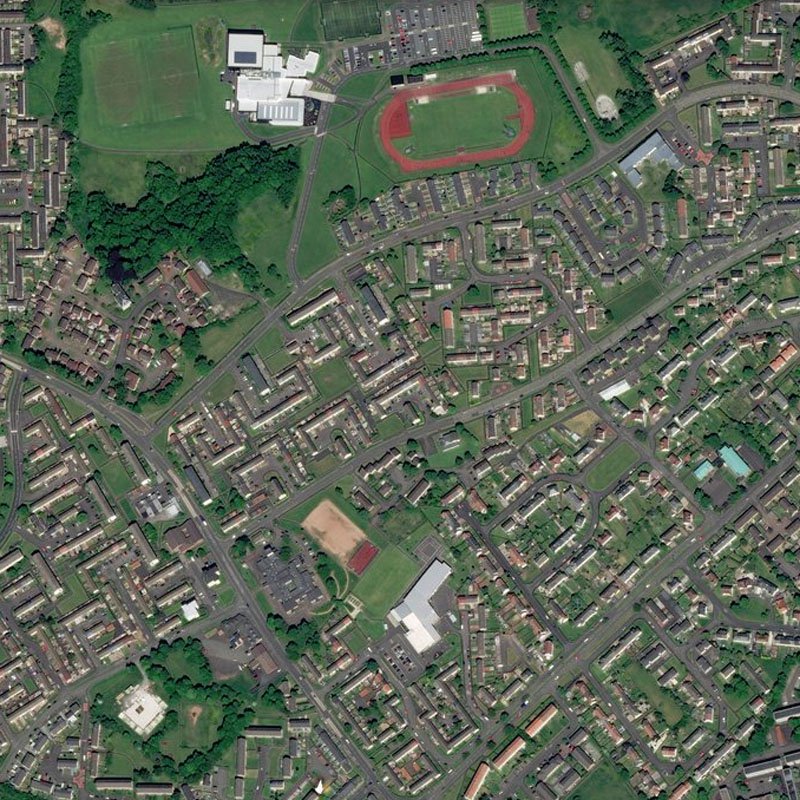 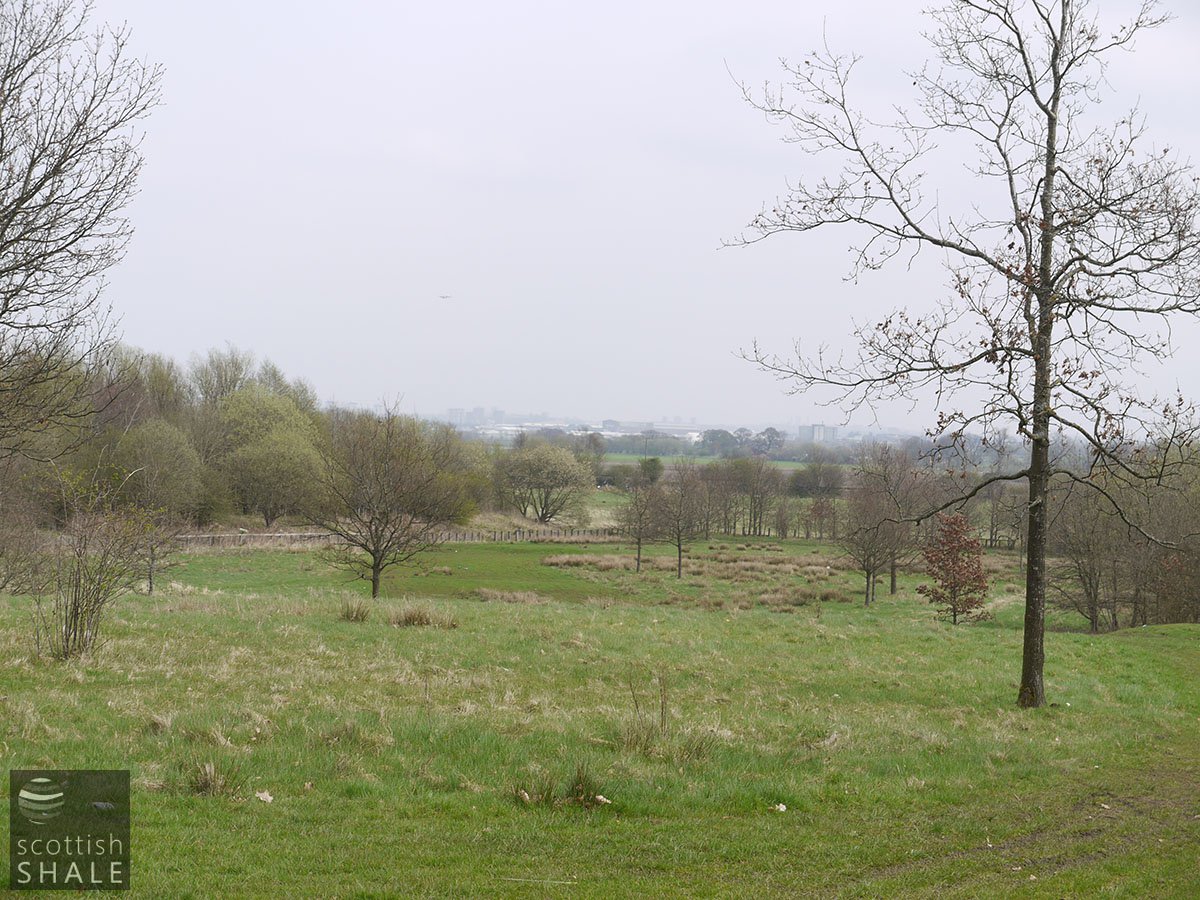 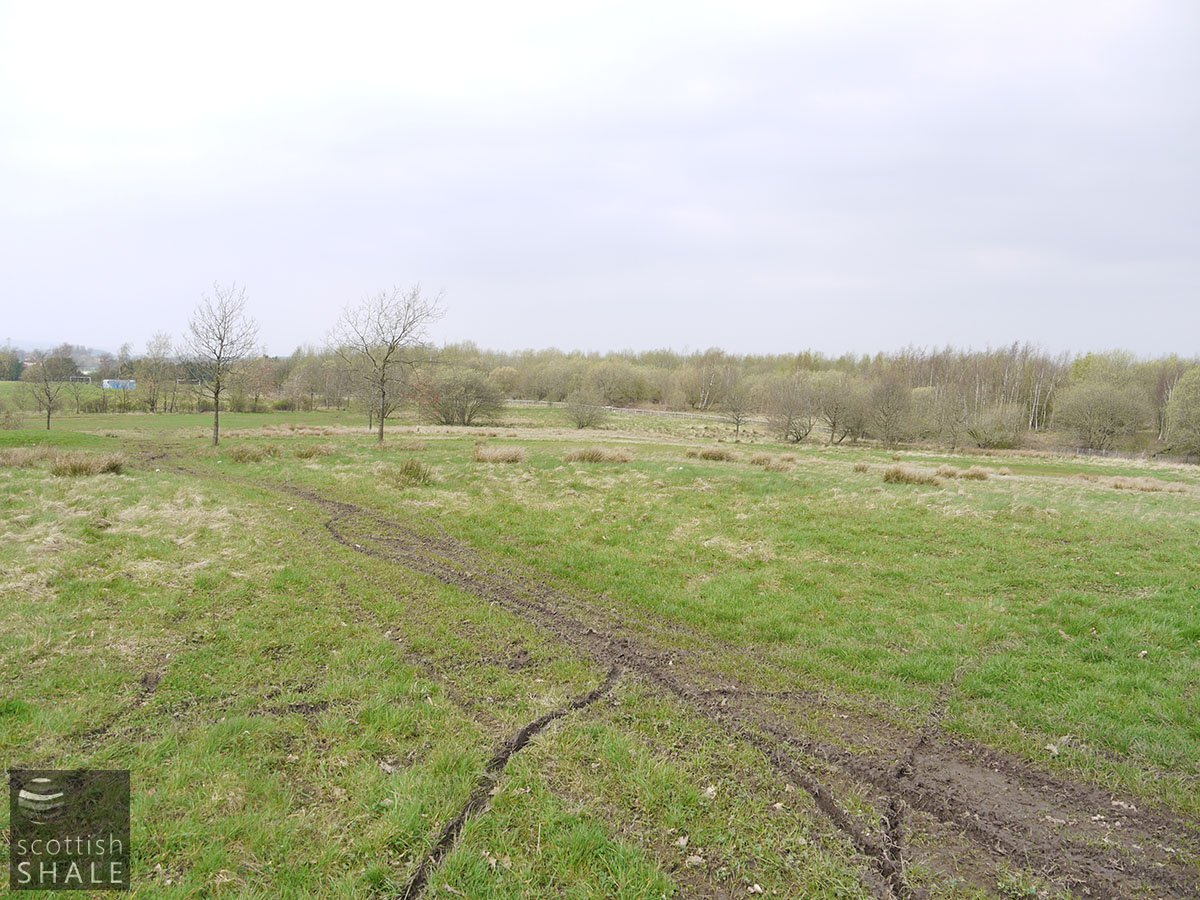 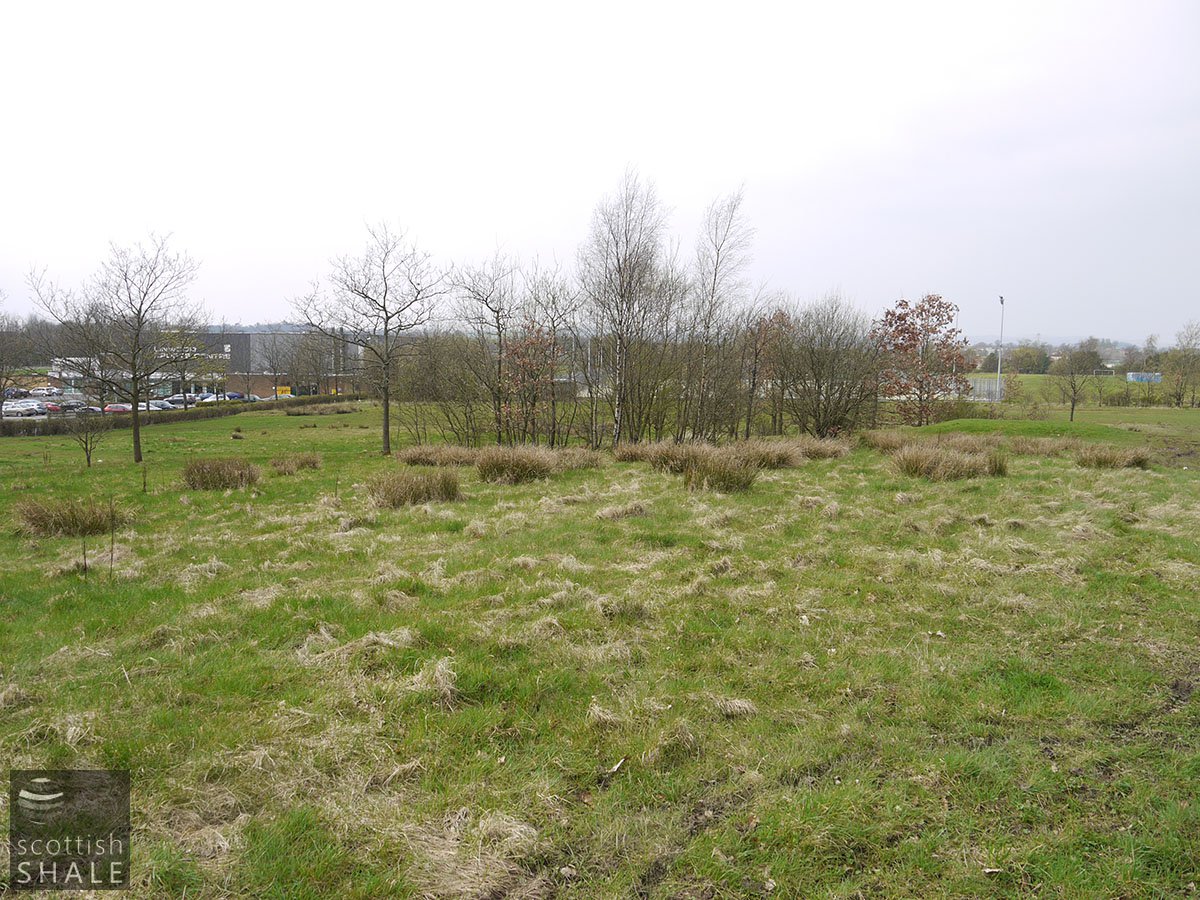 JOHNSTONE – ACCIDENT AT A SHALE WORK.

The proprietors of the Clippens Shale Works, near Johnstone, are erecting a large number of retorts for the manufacture of shale oil, and on Saturday, while a retort was being hoisted into its position by a crane, it swing round, and coming into contact with another retort which had been secured in its place, knocked it down, the force being communicated to the others, the whole row, amounting to twenty, fell with a crash. One of the diagonals of the crane and the jib were broken, but the men escaped unhurt. A number of the retorts were broken. The damage done is estimated at £700.

Messrs Binning & Campbell, shale oil manufacturers, whose extensive works are situated near Linwood, and who employ a large number of workmen, have granted their employees a 15 per cent advance on their wages. This advance has been given in compliance with a requisition from the men. The above firm have just completed a fine row of houses for the accommodation of their workmen. The houses are built a substantial style, and must prove great boon to the men, many of whom had travel a long distance to their employment. Others of a similar character are in course of construction.

GALES - ...but by far the greatest amount of damage has been sustained by the Shale Company, at their works at Clippens. The roof of the presshouse was blown away 50 yards, and the refinery and the ammonia house were completely demolished.

MANAGER (Retort) Wanted to Take Charge of a Large Number of Retorts and Men. As good encouragement will be given, only competent parties need apply to Clippens Shale Oil Company, 16 Bothwell Street, Glasgow.

Johnstone – Body Found - A labourer, named William Bain, who wrought at the Clippens Shale Oil Works, and lodged with Mrs Lees in Quarry Street, went missing on Hogmanay, and though numerous enquiries were made no information could be obtained respecting him. On Sunday, his body, in his working clothes, was found in Glasgow, Paisley, and Johnstone Canal at Johnstone. Bain was 40 years of age, and unmarried. He was a native of Bathgate where he wrought for a number of years in the Glenmavis Distillery.

The extensive shale oil works at Clippens, belonging to Messrs Binning Co., Johnstone, have ceased operations, and a considerable number of workpeople have been thrown out of employment in consequence. The principal cause the stoppage is the want shale and coals.

The record was today closed in this action in which the Clippens Shale Co. sued for damages, estimated at upwards of £80,000, from the defenders' alleged failure to implement a contract for delivery, in certain specified quantities and at stated times, of Clippens or Clippens of Craigend shale. The defenders say that this action is concurred in by all the partners of the pursuer's company; that there was no completed contract such as is here founded on; and that, if there was, it depended on conditions which have not been fulfilled.

The Shale Oil Trade.—This trade has improved immensely the neighbourhood. The extensive works, near Balaclava, belonging to Mr Scott, are turning out greatly increased quantity. The trade has not been bettor for some years in this branch, and the surrounding works are all on full time.

Yesterday afternoon a serious fire occurred at the Clippens Shale Oil Works, near Linwood, about four miles from Paisley. The works had been in existence for about ten years, and during that period have been largely extended. About a month since they were transferred to a limited liability company. They occupy about fifteen acres of ground and the manufacture carried on is that of paraffin oil. Each department of the works is detached from the others. The fire yesterday afternoon occurred in one of the main buildings of the works, known as the crude scale-house, the most south easterly of four similar buildings, and detached by a roadway of about twenty feet form the adjoining building, the refining-house. The fire originated in the north-west corner of the crude scale-house, and, as may be supposed from the inflammable nature of the material, it rapidly spread. In the course of about half-an-hour the whole building was enveloped, the flames rising to a height of 100 feet in the air. The Johnstone fire brigade worked assiduously in protecting the adjoining buildings. About ten o' clock last night the fire had only partially burned out. It is estimated that machinery to the value of about £3000 has been destroyed, and other damage done will not be under £7000. A portion of the property destroyed only is covered by insurance. The origin of the fire is unknown.

On Saturday one of the stills in the Clippens Oil Company's Works exploded, very seriously injuring two men.

HENDERSON AND ANOTHER v. THE CLIPPENS OIL COMPANY (LIMITED)

The pursuer and reclaimer in this case is Norman Macfarlane Henderson, manager of the Broxburn Oil Works and the defenders and respondents are the Clippens Oil Company (Limited), 16 Bothwell Street Glasgow, whose works are situated in Renfrewshire and at Straiton, near Edinburgh.

...The Company was incorporated on 9th February 1879, and then took over the Works, Pits, Railways, Houses, Leases, &c. together with the Stock-in-Trade of the unincorporated Company called the Clippens Shale Oil Company, of which Mr. James Scott was the then sole partner, at a price of £150,000 as per agreement hereinafter referred to. The Company has since incorporation extended upwards of £25,000 in additions and improvements to the works at Clippens, and the result is that it has already refines and now can refine, upwards of 450,000 gallons of crude oil per month into Scale, Wax, Burning Oil , Lubricating Oil, &c. &c. The company has at present two Pit leases at Clippens (copies of which can be seen at the Company's Office), for shale, ironstone and coal, which it is at presently working, but which when the Pentland Property, hereafter referred to, is further developed, it is intended to discontinue working. In 1879, the Company acquired under lease, and on favour able terms, the extensive field of minerals at Pentland, about 6 miles from Edinburgh............ The Pentland works has been, for the last four months, in full operation with the most satisfactory results; but in order to drive the full benefit of the acquisition of this property, it is proposed to erect extra retorts and appurtenances, to enable the company to distil 180,000 to 200,000 tons of Shale per annum.... It is intended that the works at Pentland shall be devoted to raising the Shale and manufacturing it into Crude Oil, Ammonia. &c., and the works at Clippens to refining the Crude Oil into Wax, Burning Oil, Lubricating Oil. &c.