Hopetoun Oil Works operated for a longer period than any other crude oil works in Scotland. It was one of three oil works established by the Uphall Mineral Oil Company Ltd, and supplied crude oil to their Uphall Refinery by means of a circuitous railway line from Uphall (built 1886) that also served the company's Forkneuk pits. The works were initially supplied by Hopetoun No. 1 and Hopetoun No. 2 shale pits, adjacent to the works and subsequently by Hopetoun No. 3 mine which lay to the south east. The company constructed housing for most of the workforce in Niddry Rows.

Amalgamation of the Uphall Oil Company Ltd with Young's Paraffin Light & Mineral Oil Company Ltd in 1883 led to new investment in Hopetoun Oil Works and the replacement of the last of the vertical retorts originally used there. New mines were sunk to the north and west of the works served by a mineral railway that eventually extended as far as Fawnspark, close to Philpstoun.

The works were substantially rebuilt in about 1906 and new retorts installed. A substantial album of photographs records this construction work in progress (LVSAV2009.028). Having exhausted available space to dump spent shale in the vicinity of the works, a haulage was constructed as part of these modernisation works, passing beneath the Greendykes to Winchburgh road to a new tip south of the works. This bing was subsequently extended eastward, placing Niddry Rows in continual shadow, and ultimately formed a continuous mass with the Broxburn Oil Company Ltd's Albyn bing. 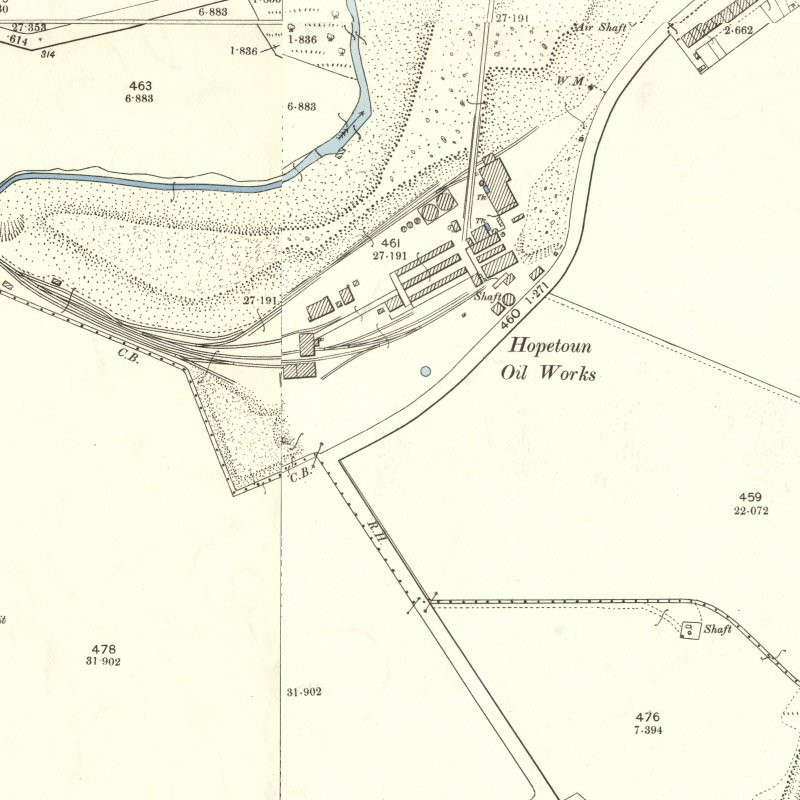 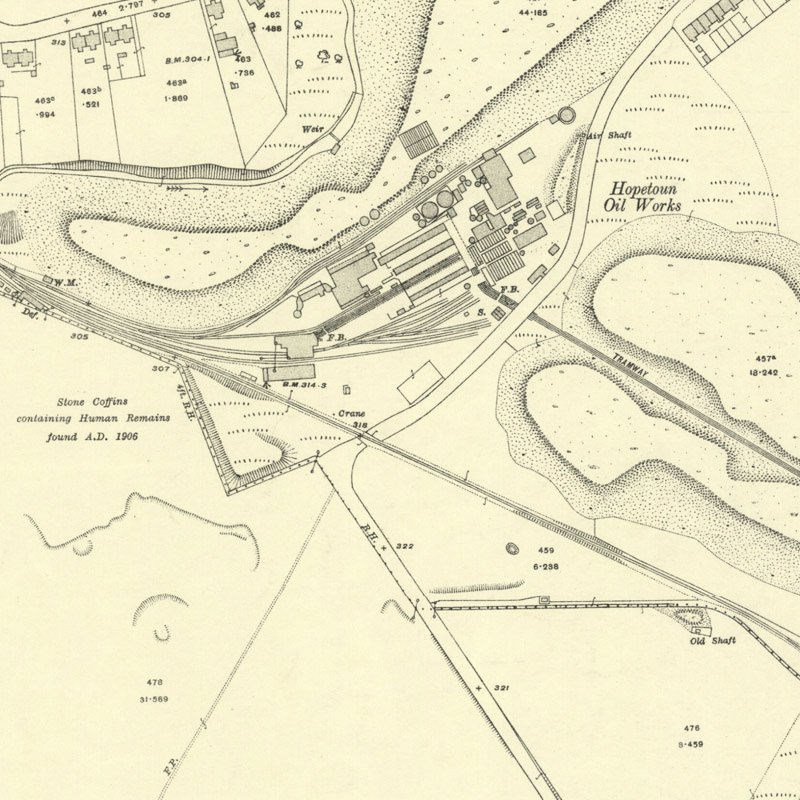 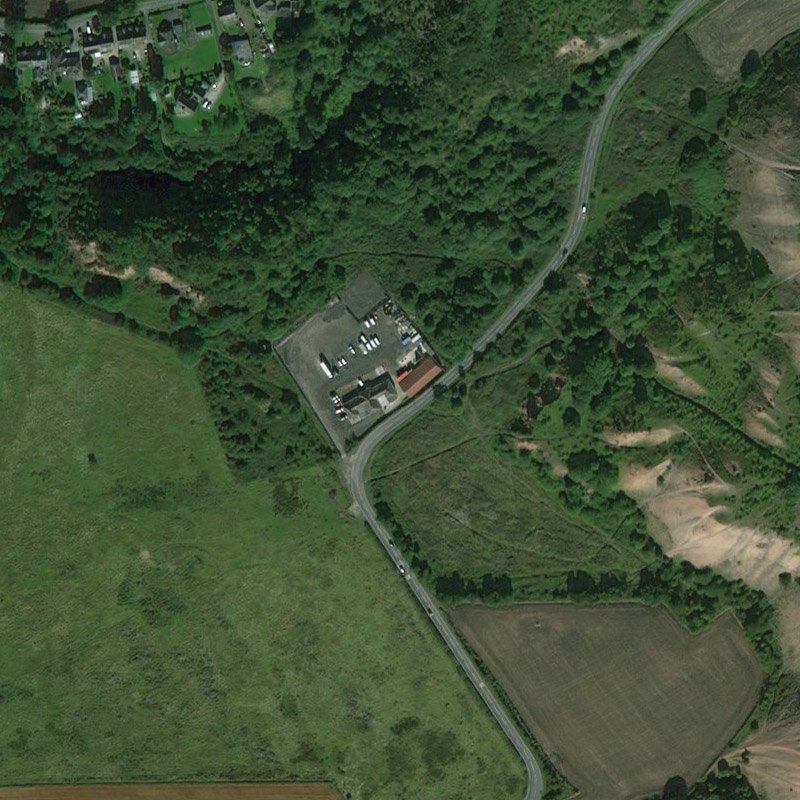 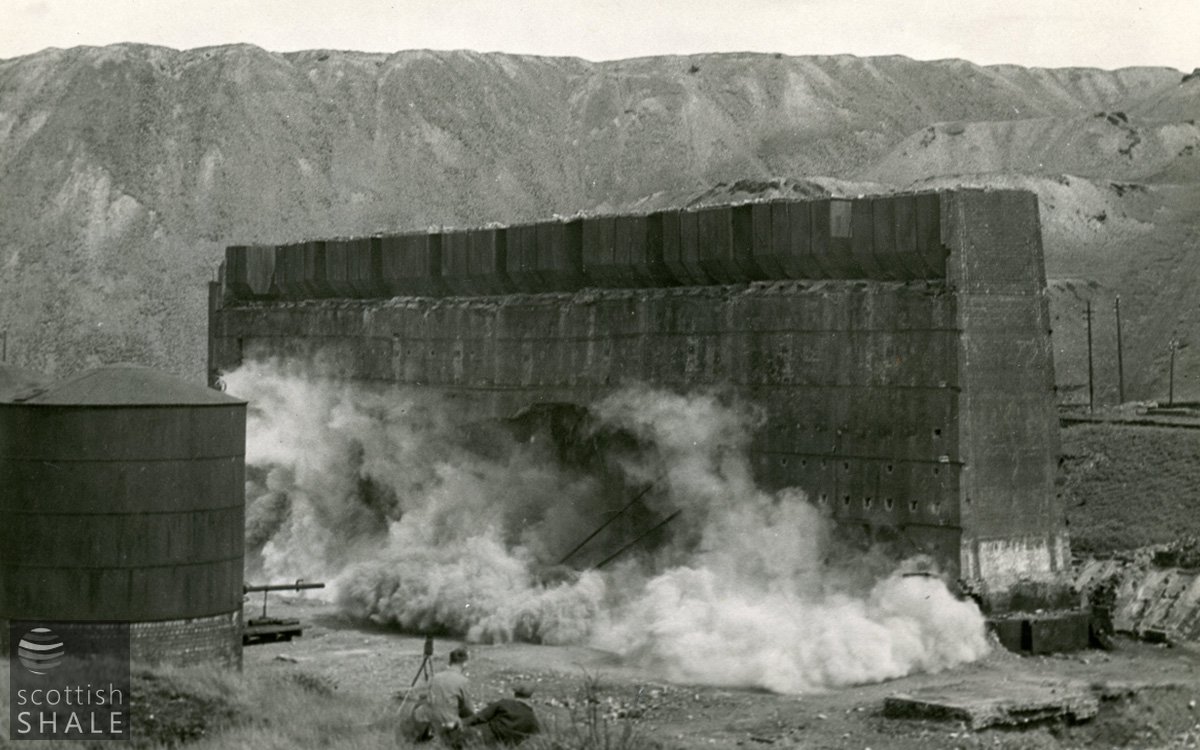 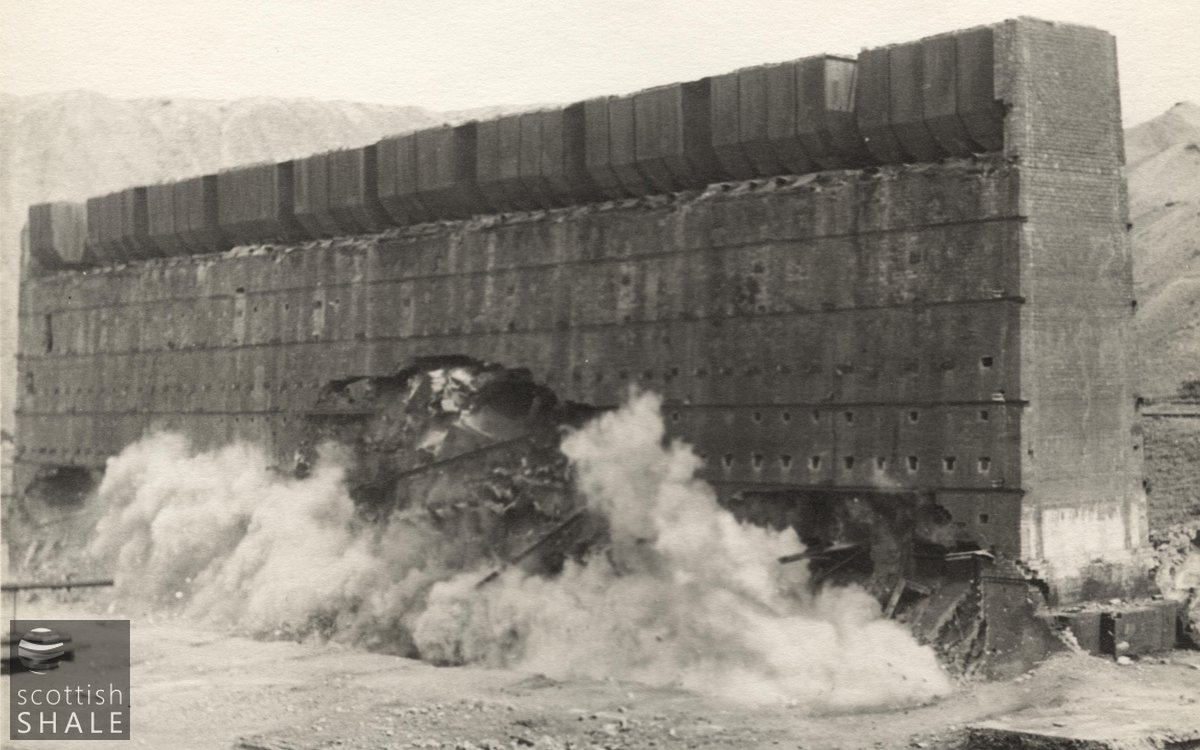 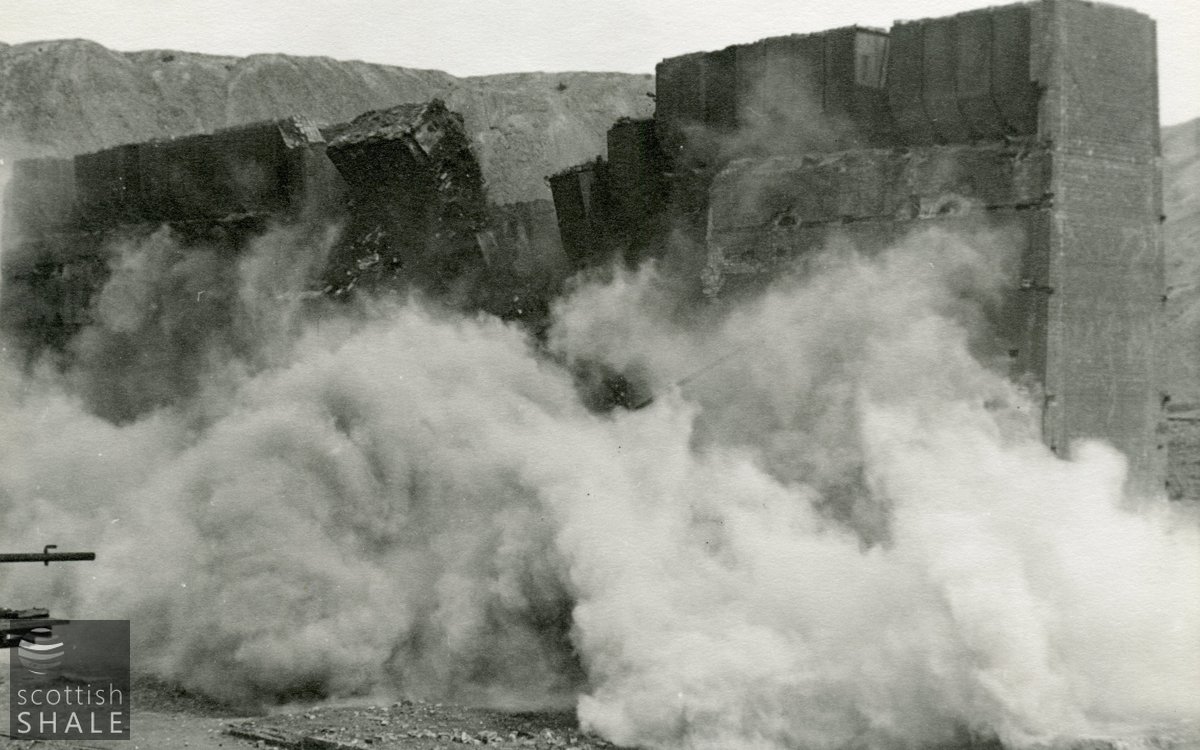 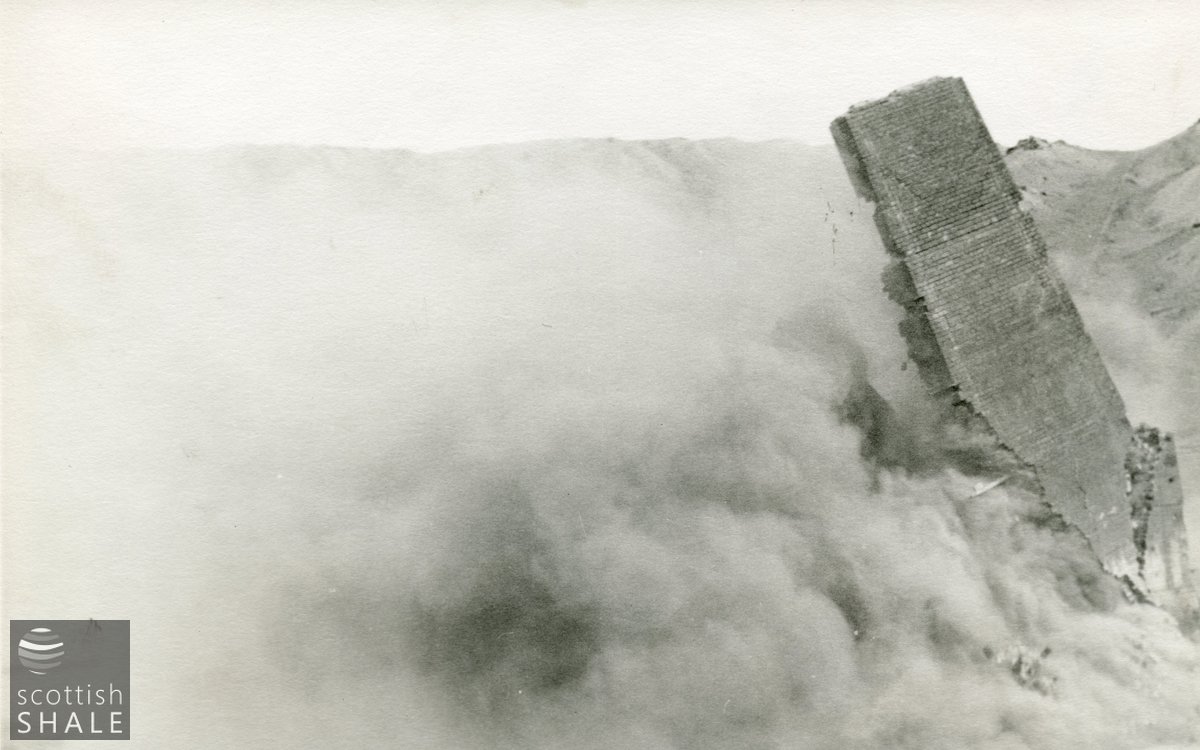 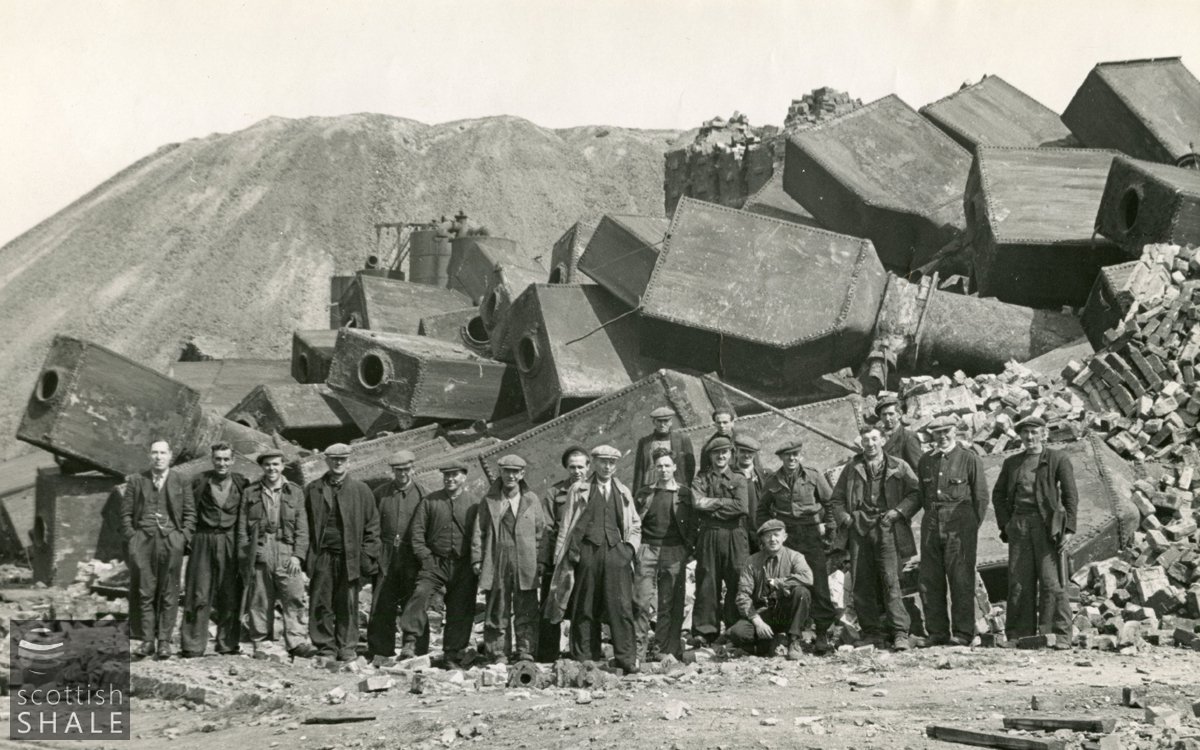 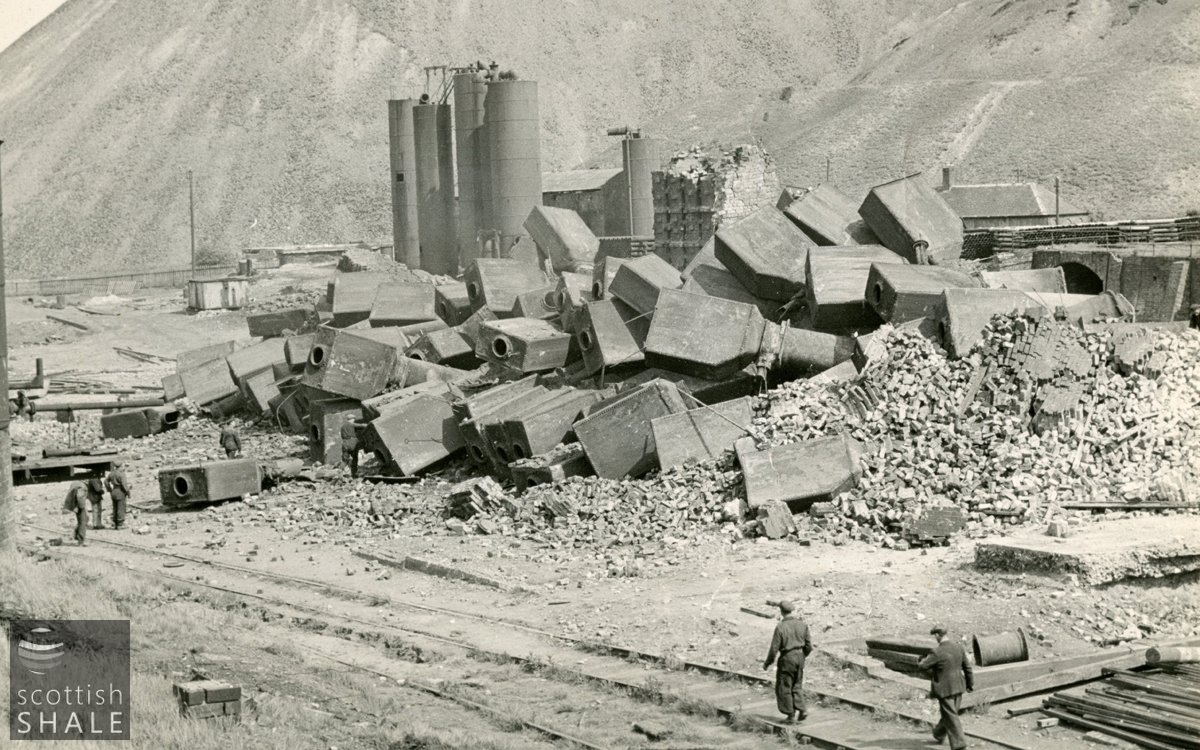 Spent shale from Hopetoun oil works seems initially to have been tipped to the west of the works, up to a boundary formed by the Niddry burn and the mineral railway that served the works. By 1894, when the second edition OS map was surveyed, waste was being tipped to the north and east of the works, already having buried the site of the first Niddry shale pits, with tipping operations increasingly hemmed in between the Niddry burn and Niddry village. In 1906, the oil works were reconstructed and a new bridge installed beneath the railway to a new tipping site south of the Niddry road.

The 1914 map shows that every part of the land north of the road had been used for tipping, with the course of the Niddry burn diverted in some places. The Hopetoun south bing already extended a considerable distance, with tipping taking place from stepped platforms on either side of the haulage route. As the 20th century progressed, the bing reached its full height, and then the tipping from the bing top extended north eastwards towards the village of Niddry, which lay in a progressively narrowing canyon between the north and south bings.

When the mineral railway between Hopetoun and Broxburn works was closed following the closure of Broxburn works in 1926, it became possible to extend the Hopetoun south bing towards the south. Eventually Hopetoun south bing meet and merged with the bing that extended north from Broxburn oil works, forming a long continuous plateau . This mountain of spent shale is now known as the Greendykes bing and (along with Hopetoun North bing) is now protected as an ancient monument. 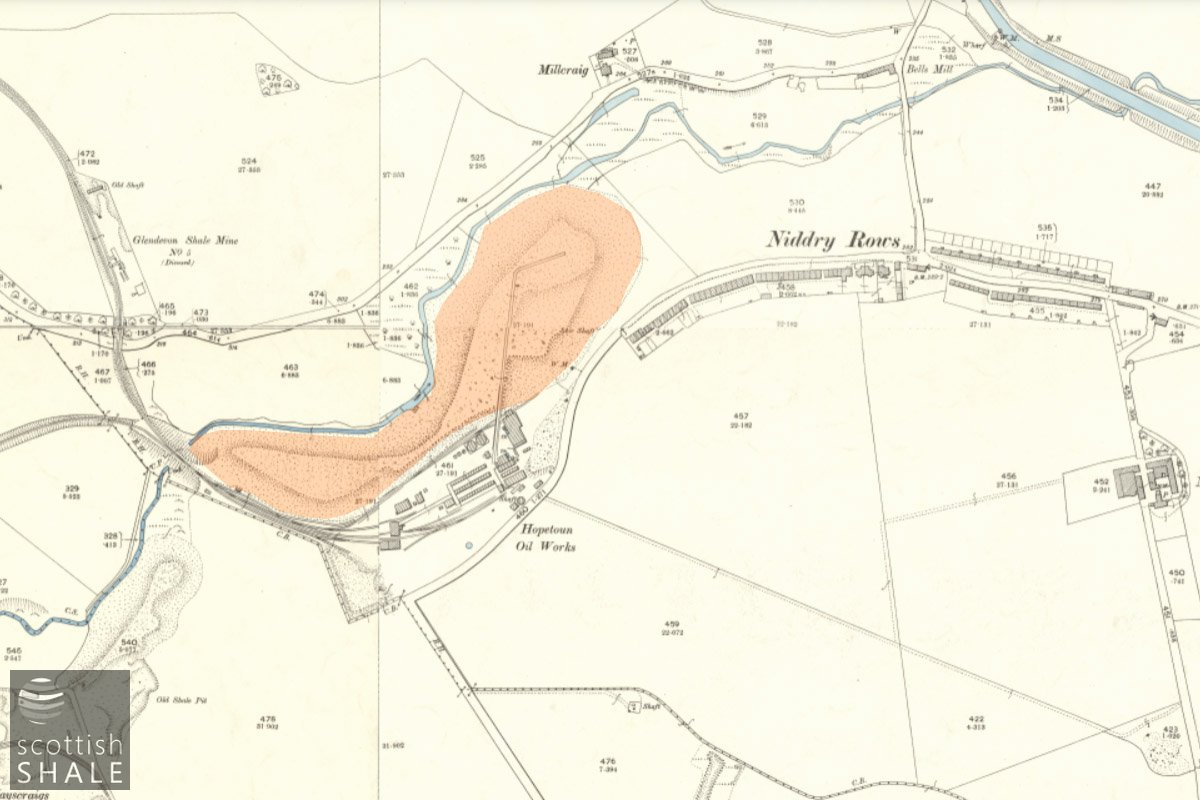 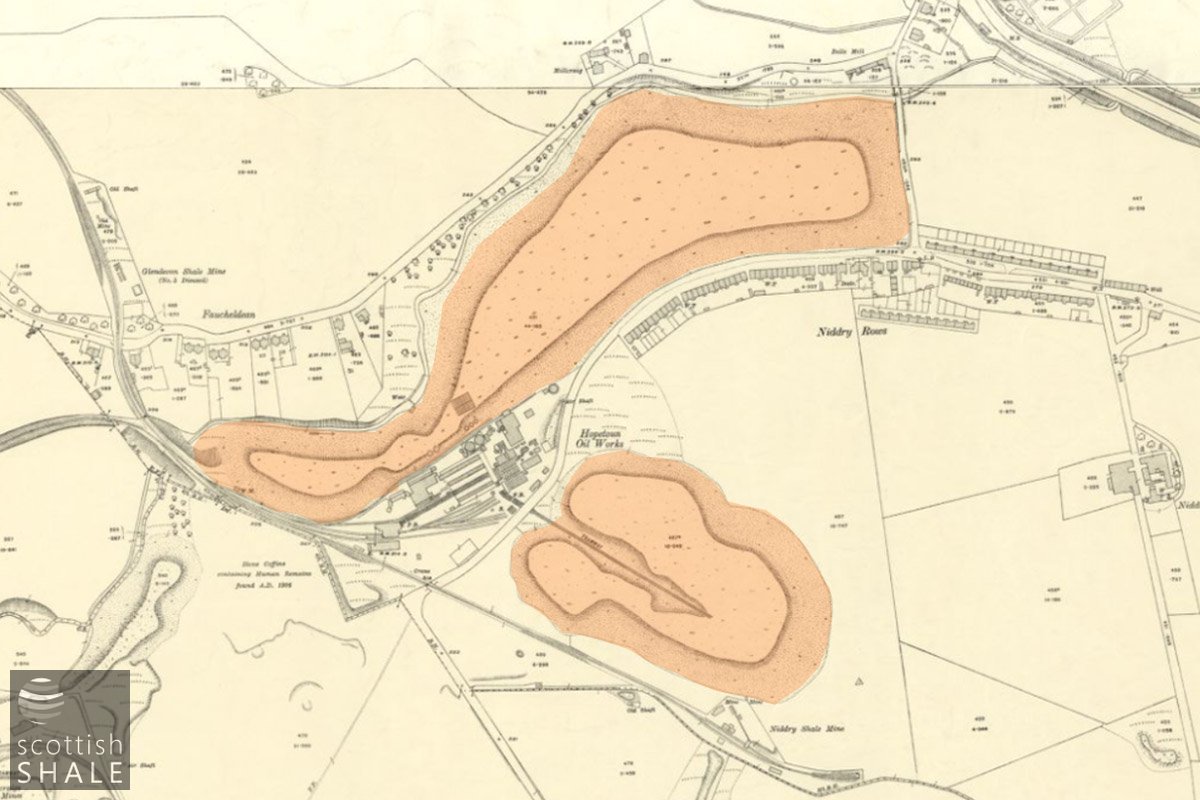 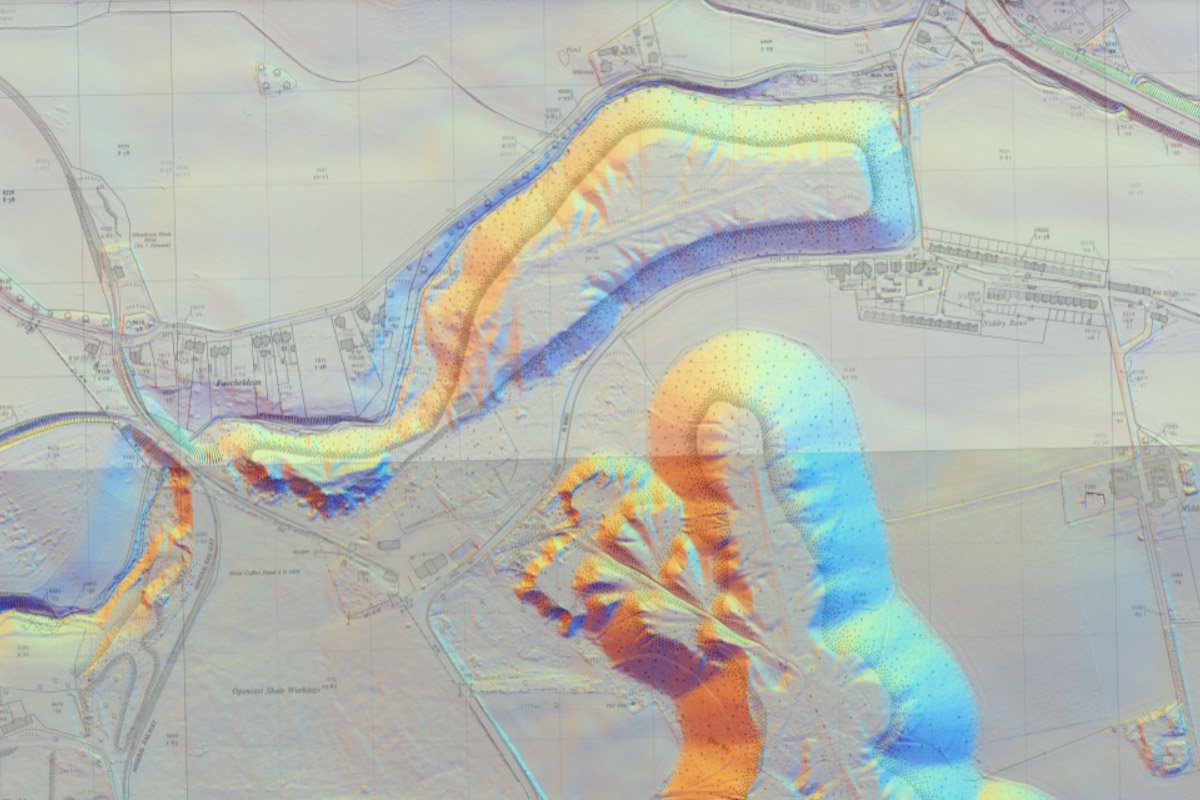 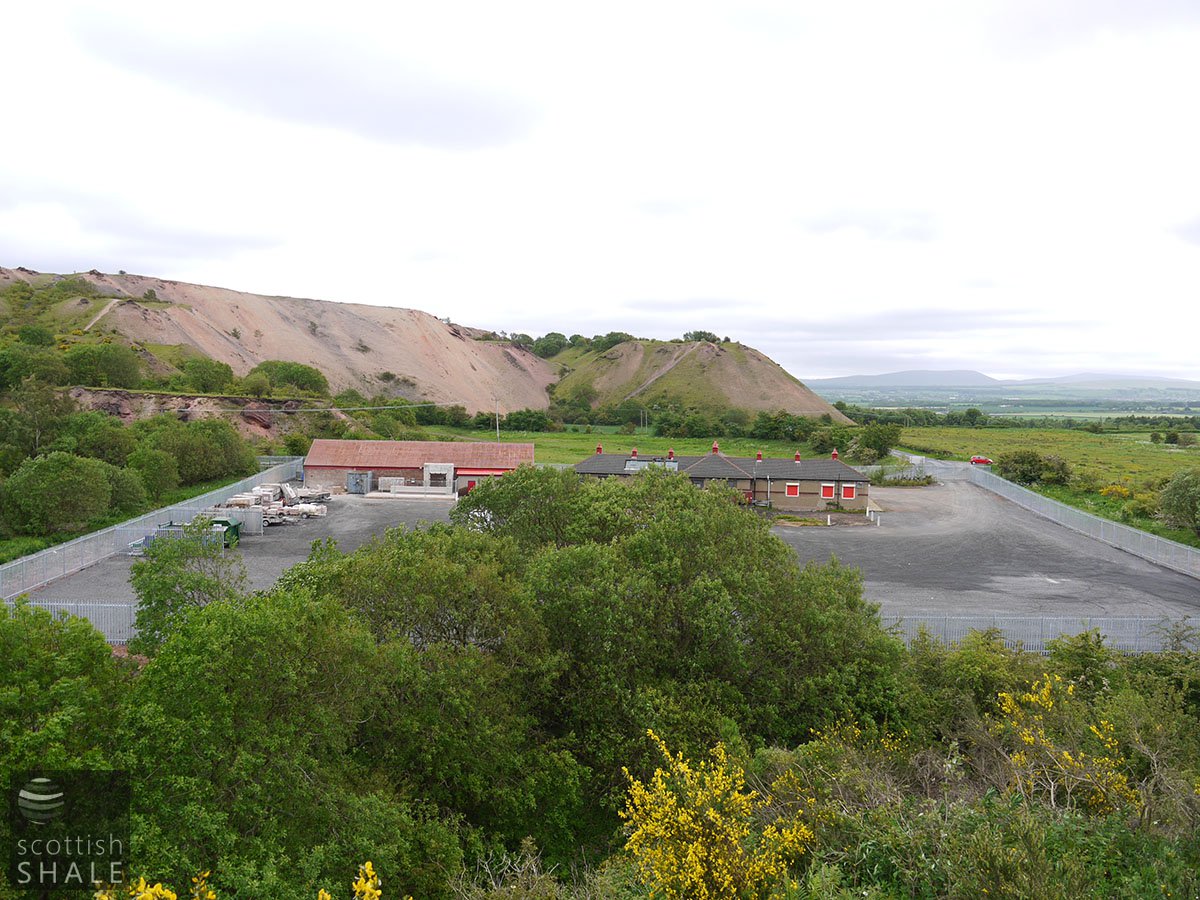 View from original bing, across site of the oil works toward the new bing. Looking south east. June 2011. 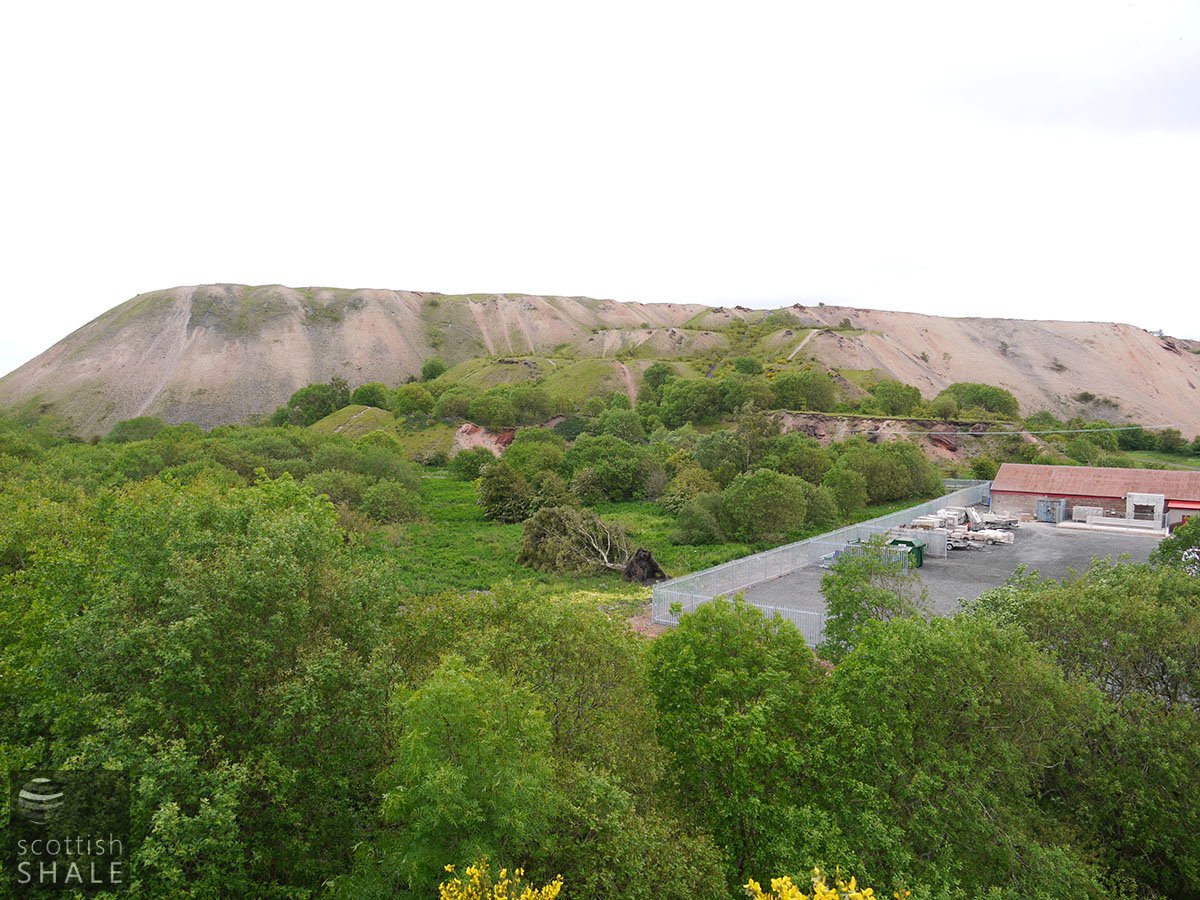 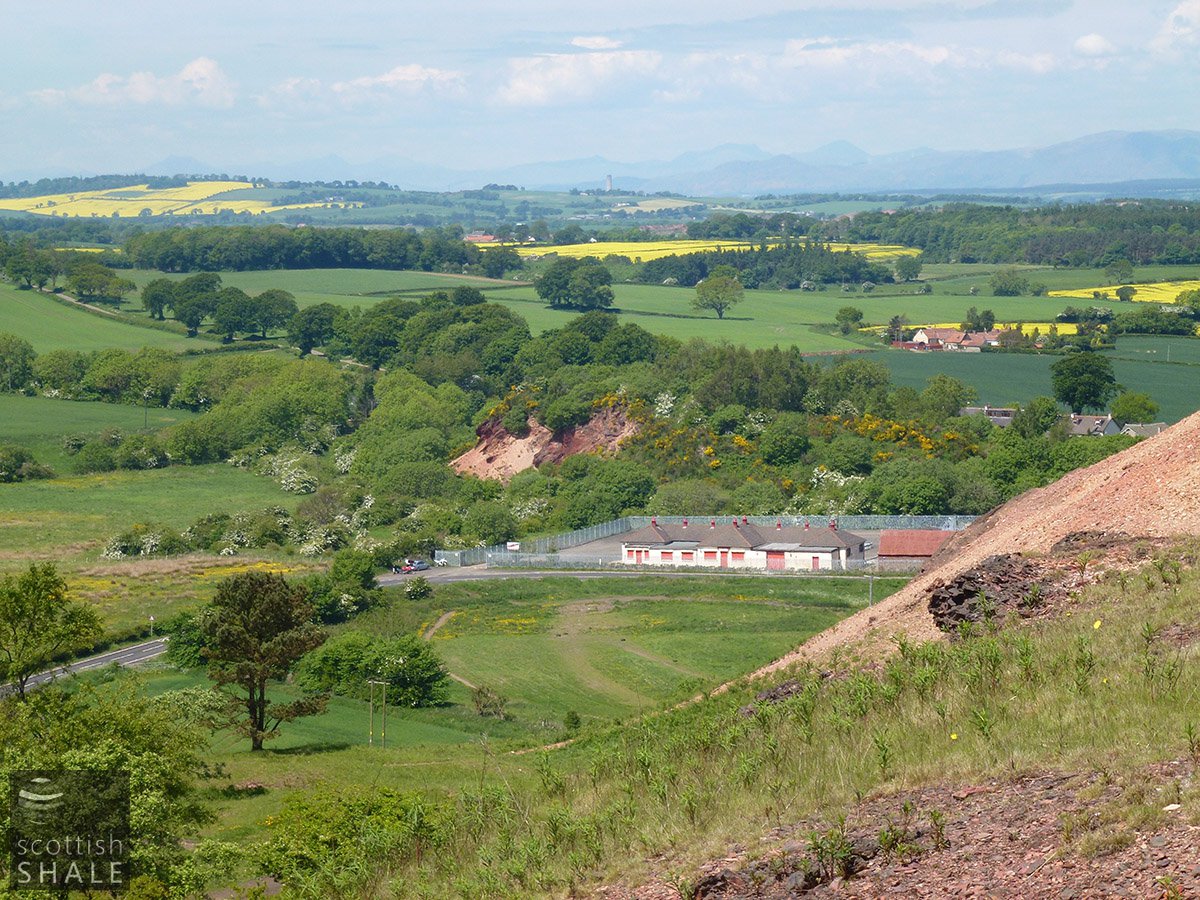 At Hopetoun the vertical retorts were stopped last month; and now the company's retort plant is all of the most modern and approved description, consisting entirely of the Pentland and Henderson retorts, the two best which have been yet devised.

Operations are going on apace in connection with alterations at Hopetoun Oil Works. Quite a number of labourers are engaged making the haulage road for the new spent shale bing, and it is expected that a new bench of retorts will soon be ready.

Young's Company is making rapid progress with its extension of plant at Hopetoun, Niddry. Mining operations have begun and a new mineral railway to Niddry will soon be busy.

A further step to improve the working conditions of their employees was taken by the Scottish Oils Limited, when new workmen's baths were opened at the Hopetoun Oil Works, Niddry, West Lothian. The baths are fitted with sprays in 160 cubicles, and a mess room and ambulance room. Seventy-live per cent of the workers used the baths during the first day. The innovation costs 4d per week to those workers over 21 and 3d to others.

OPENING OF NEW BATHS AT NIDDRY.

The Scottish Oil Coy., Ltd., have been supplying their workers all over the area with baths, and last week the subsidiary company. Hopetoun Oil Co., opened their baths at Niddry. These baths are situated near the works, and from them beautiful view may be obtained of the surrounding countryside. At one time the Rows were in the immediate vicinity, but demolition has taken place, and the populace has been housed in the new housing scheme at Millgate. They are similar to the baths recently erected at Winchburgh. and should prove as great a boon to the workers, who are taking full advantage of them. When the men arrive for their work, they place their clothes in a locker's and don suitable working garments. When they return at the end of their shift their clothes are placed in another locker, and they proceed to cubicle, which has spray at different temperatures. A system of heating has been introduced, which dries the clothes in the locker. The foremen, if they so desire, can indulge in a hot bath, as two large baths have been installed. For those who reside at a distance, there is a large room with seating accommodation, where the men may take their mid-day meal. In case of accident there an ambulance room fitted with the necessary equipment, and the company, in making the various appointments to the baths, have engaged men with ambulance experience. The weekly cost to the workers is fourpence, and to the boys threepence.