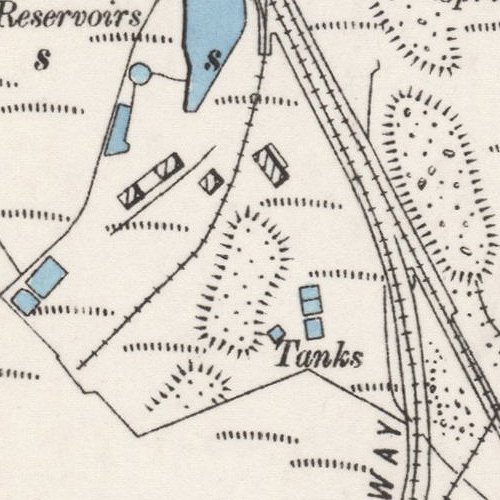 The precise history of oil work(s) at Benhar remains unclear, and bound up with the murky dealings of local coal-master George Simpson, who was responsible for a spectacular range of scandals, swindles, and insolvencies throughout his long career in the mining industries. Redwood lists Benhar three times in his historical list of oil works in Scotland.

" Simpson started a work at Benhar in this year (1860), and it was in operation until about 1874, when it became the property of a limited company floated by Simpson; but before the company had a chance to get started they found the capital had all been absorbed........... In 1874 a limited liability company was formed to take over Simpson's "Benhar" work, but the capital was all absorbed and Simpson suddenly found a change of climate necessary for his health."

Some of Redwood's comments are clearly incorrect (eg. the formation date of the West Lothian Oil Co. Ltd), others raise suspicions, notably an opening as early as 1860; a time when retorting processes were still covered by Young's patent. Until contrary evidence comes to light, it is assumed that some of Redwood's notes are spurious and that a single oil works existed at Benhar, that changed ownership on a number of occasions. The available evidence therefore suggests the following history:

It is not immediately obvious why oil works were ever established at Benhar; as the bituminous coals mined in the area were not particularly suited for oil production. For much of the period of operation, the site seems to have served only as a refinery, processing crude oil produced at various shale works that lay ten miles of more to the east. The site would seem far from ideal for this purpose, being located in remote moorland, with a poor supply of water for refining processes.

The works are not marked on any OS map or large scale plan, but the location and boundaries of the site might be surmised from the pattern of derelict ground marked on the 1895 OS map, which retained reservoirs, tanks, a siding linking to both the North British and Caledonian railways and a number of small buildings. Most of these small buildings survived on the 1939 OS map; one marked "Brickworks Cottage" suggesting the site had been used for that purpose in the preceding years.

Today the course of the railway siding and some of the reservoirs remain evident, with the foundations of the "brickworks cottage" remaining beneath the undergrowth. Areas of bing and rough ground have been levelled and returned to grazing, but a substantial brick-lined tank, presumably associated with treatment of waste water, survives on the lower part of the site. 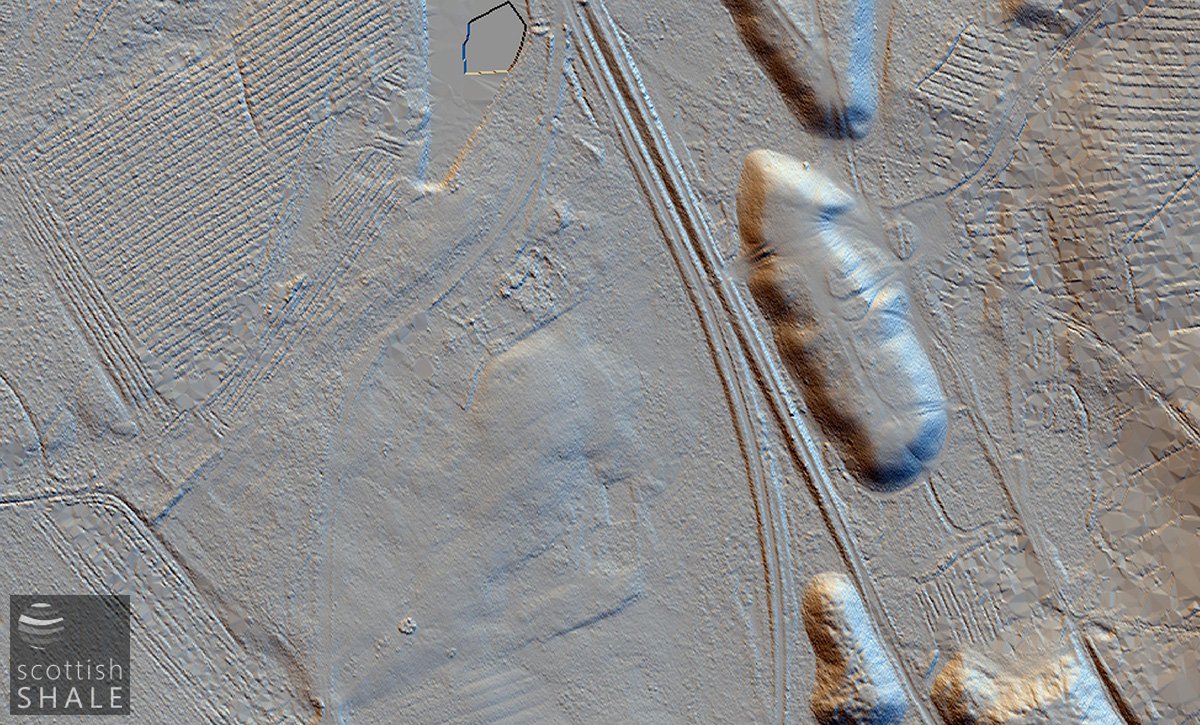 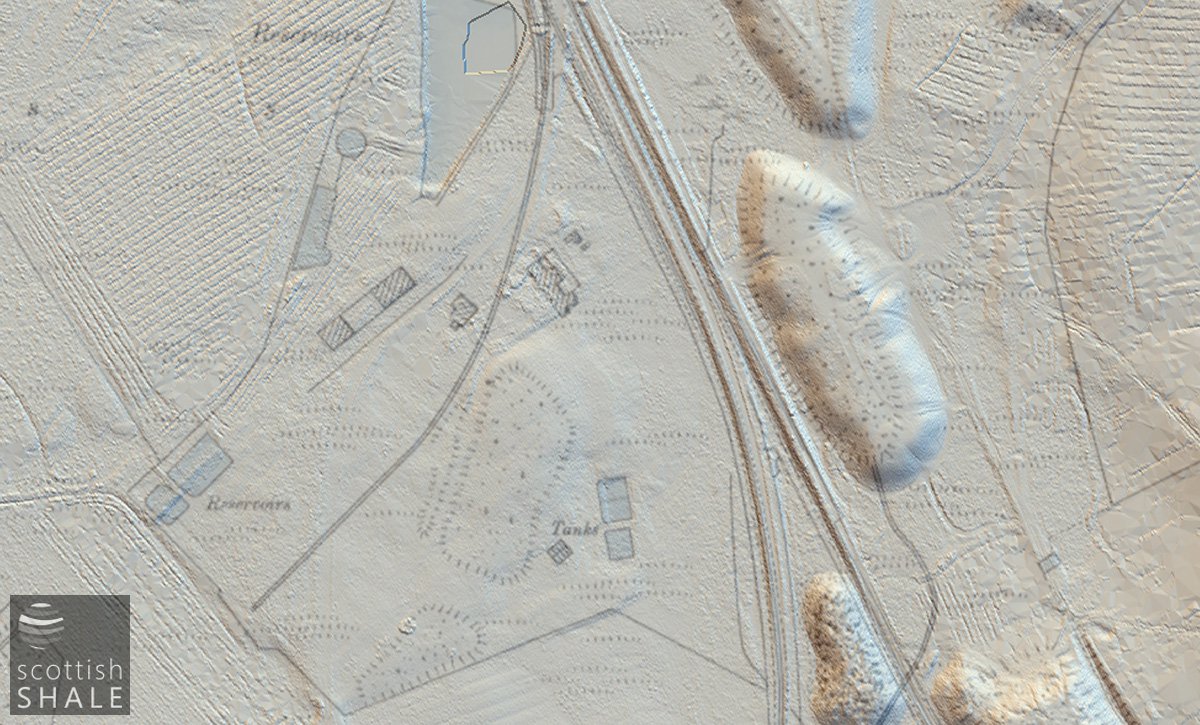 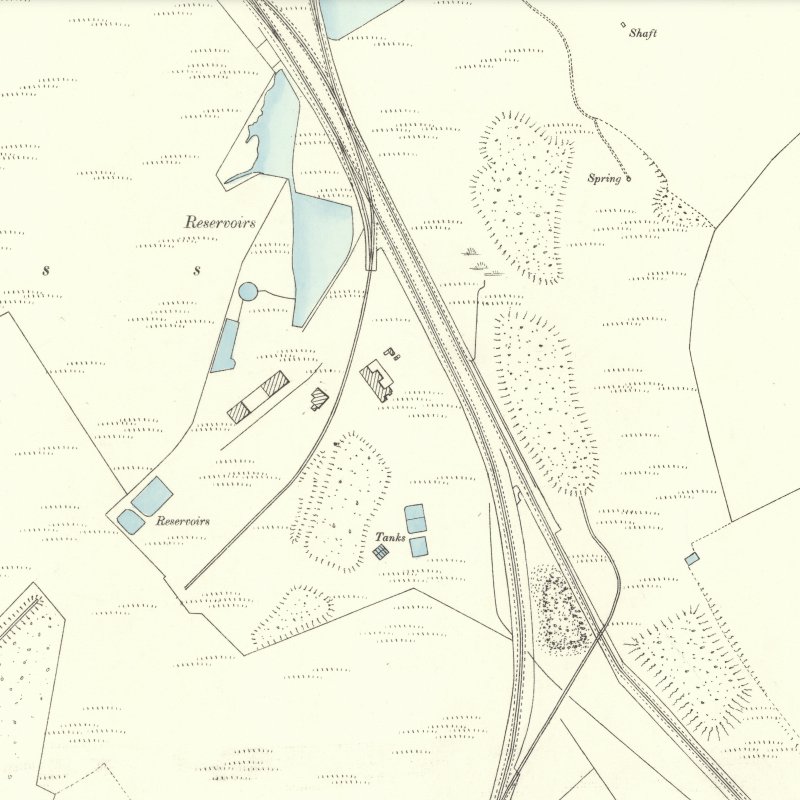 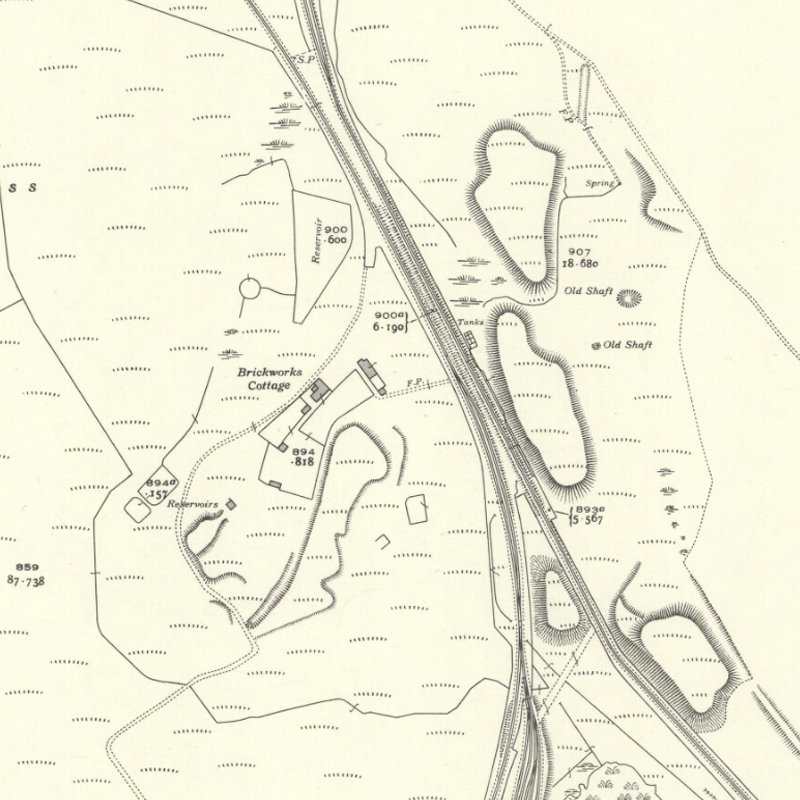 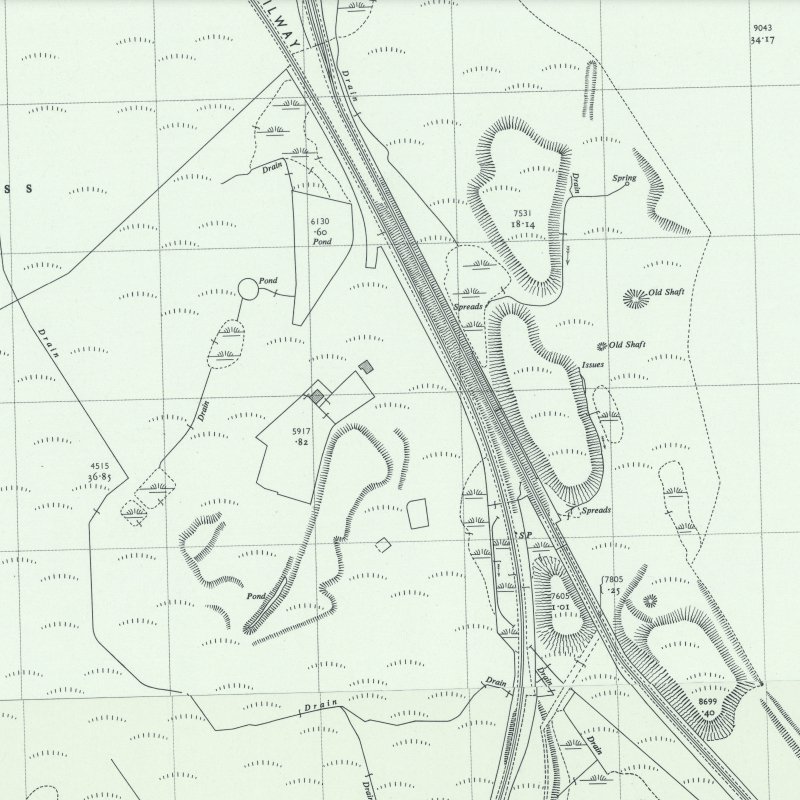 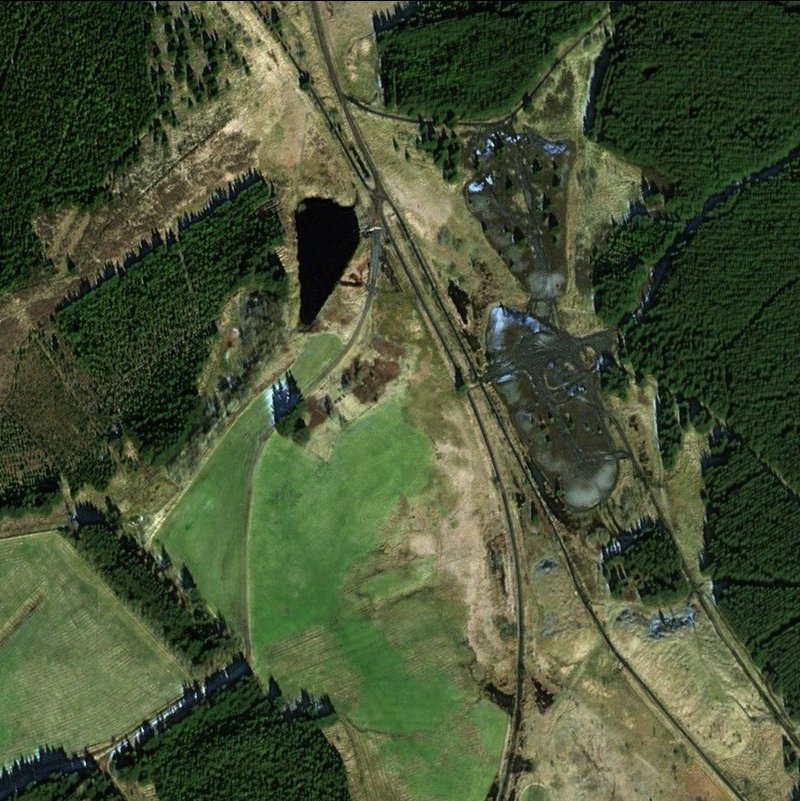 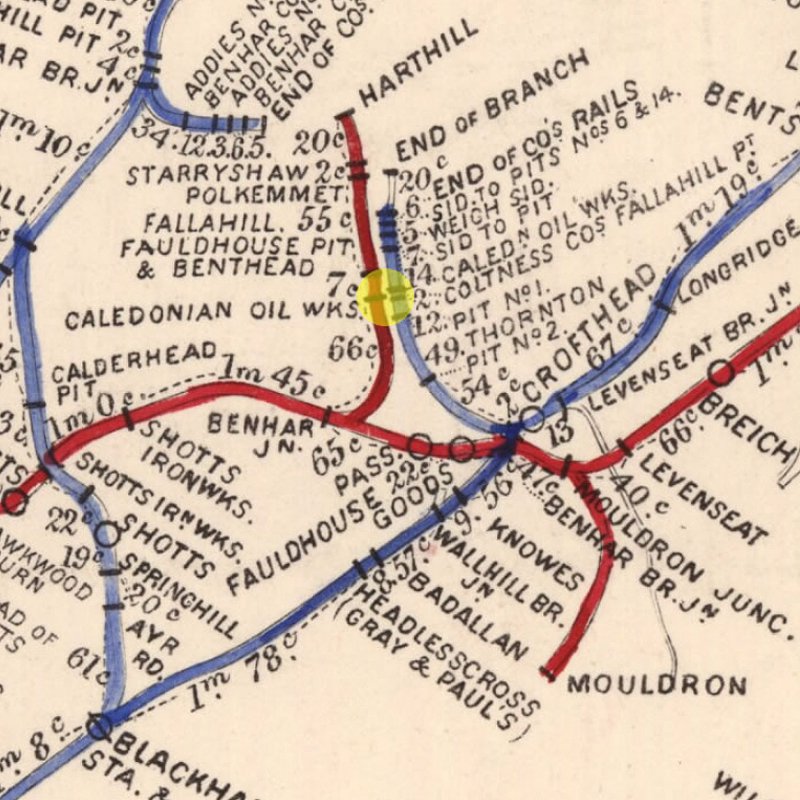 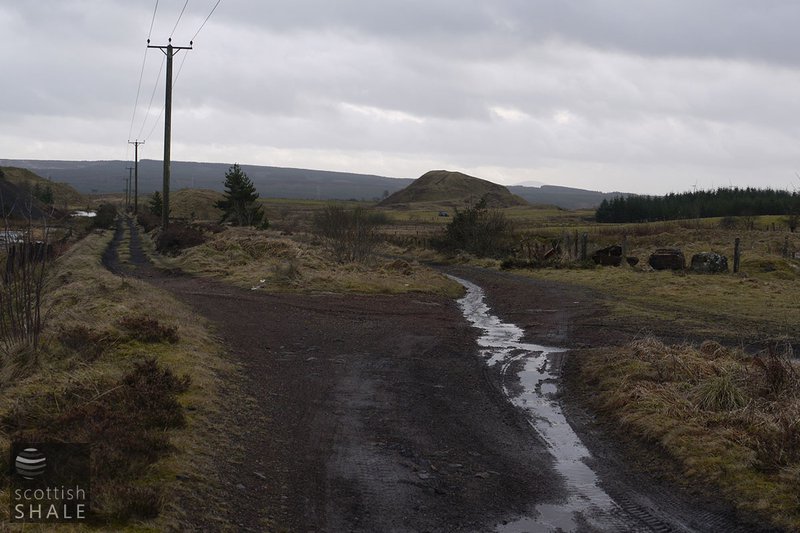 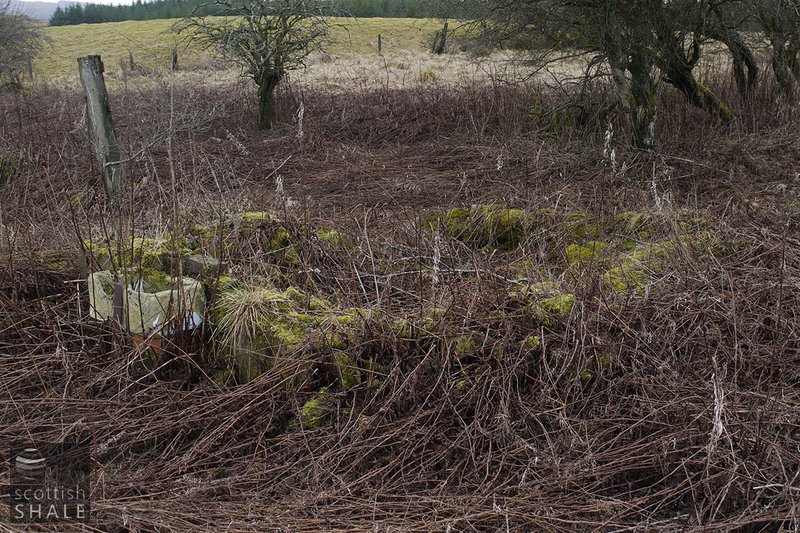 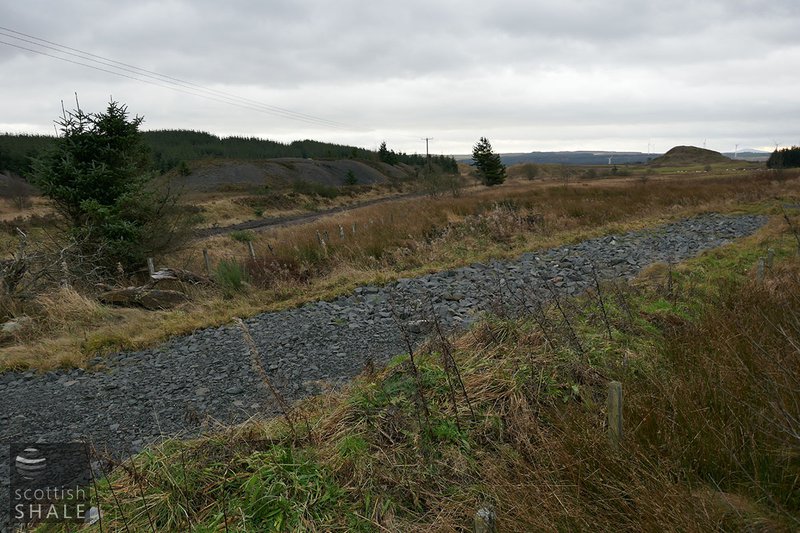 Hardstanding marking the route of the siding into the oil works site. Looking south. December 2016. 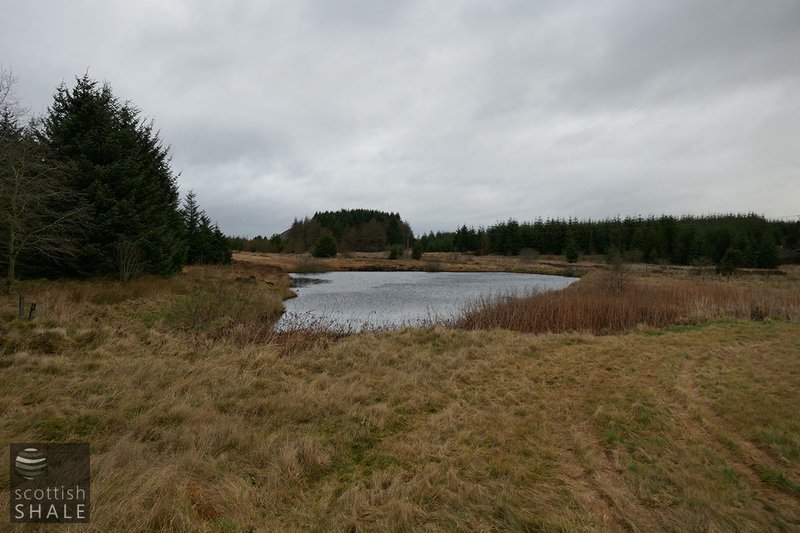 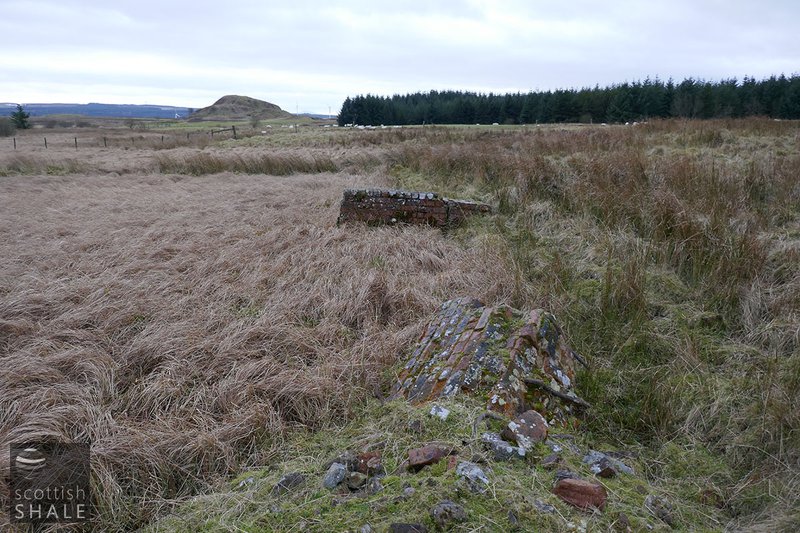 Mr George Simpson stated that he was the lessee of the Benhar Colliery, in the parish of Whitburn, from which he raised 70,000 tons annually. was sent by private railroad to the public railway, and did not pass along the road. He believed that if he were assessed upon the number of horses employed, he would contribute a sum fully adequate to the use he made of the road. Cross-examined — He kept two horses present. It was usual for mineral owners to hire horses.

Royal Infirmary – The following sums have been received by the treasurer of the Royal Infirmary: Persons in the employment of the Mr. Simpson, Benhar Colliery and Caledonian Oil Works, - £15.

At Benhar, on the 21st inst., the wife of Wm. Newlands, Cooper, Caledonian Oil Works, a son.

On Saturday, an accident occurred the Benhar Colliery branch of the North British Railway, whereby 15 coal waggons, partly the property the coalmasters and the railway company, were almost totally destroyed. The Benhar Colliery branch was constructed some years ago by Mr Simpson of Benhar. but has since been purchased the North British Railway Company, and to save expenditure, no doubt, was made as short as possible. The ground upon which it is formed, forms the ridge of hilly ground, and at one part of the line the gradient is about I in I5. The traffic is worked by tank locomotives, and the load is regulated to the peculiar nature of the gradients, the engines not being allowed take more than 8 full waggons down at a time with iron snibbles put into the wheels of several of them, to assist in retarding their motion.

On Saturday, it appears, 15 large waggons, containing coal, were brought to the top the incline, and the guard having put in one of the snibbles, and supposing the wagons would not run further, went with the engine which takes in water at a pit on the side the branch. Gradually, however. the weight of the train overcame the resistance presented by the snibbled waggon, and gaining momentum, dashed headlong at fearful rate to the bottom of the incline. The consequence was that 13 of the waggons were smashed, being literally piled one over the other. On Sunday, a large staff of men with sufficient engine power, was brought from Morningside for the purpose of clearing away the wreck, and we learn that six or seven of the waggons are beyond repair. The damage will exceed £400.

The refinery at Uphall is being enlarged and improved by the removal of the plant at Benhar, which has not been in operation for some years.

AGM of the Uphall Oil Company Ltd, reported in the Scotsman, 24th May 1877

In all, the capital expenditure reached the sum of £57,466, but that included £40,483 paid for the Benhar works... Perhaps they would remember that last year they were in litigation in reference to the Benhar works, but they had purchased these at a price which turned out to be a very good investment. The purchase of these would set the Company free from an obligation they were under to the Benhar Company to deliver a large quantity of shale, and that was a satisfactory feature of the bargain.... The quantity of crude oil produced at Benhar (was) one and three-quarter million gallons.

AGM of the Broxburn Oil Company Ltd reported in The Scotsman, 19th May 1881

The COMPANY is formed for the purposes of purchasing Oil Refining Works near FAULDHOUSE, with lease of lands connected therewith; also, the LEASE of SHALEFIELD, & c., in the Lands of Deans, Boghall, Caputhall, and Drumcrosshall, near Bathgate, and to carry out the Business of Manufacturers of Mineral Oils and the Products thereof.

Prospectus in The Scotsman, 3rd October 1883

In considering whether we should utilise the refinery at Benhar we found that in order to make these works anything like perfect, a considerable expenditure would have to be incurred. The plant on the ground was of a most inferior description. There was no shale in the immediate neighbourhood, and further, there was no supply of good water, which is essential for profitable manufacture.

AGM of the Broxburn Oil Company, reported in Glasgow Herald, 22nd May 1884

The refining works at Fauldhouse consist of Stills, Washers, Refrigeration, Buildings and the plant and apparatus necessary for refining Crude Paraffin Oil into its various products. These works are of thoroughly modern design, and were erected some four years ago under the personal direction of Mr. James Spencer, the present Manager of the works of the Burntisland Oil Company Ltd. They are connected with both the Caledonian and North British Railways, and have thus the benefit of competing routes for the manufactured products to the principal markets, while the railway carriage for the oil between the crude works and refinery is trifling.

FOR SALE, Large Quantity of OIL BARRELS lying at the Works of the West Lothian Oil Co., Fauldhouse. The SUBSCRIBERS will receive Offers up till Noon of Tuesday 3rd May, for the whole or any portion of the undernoted quantities of Oil Barrels lying as above. Viz.- 6500 more or less PETROLEUM OIL BARRELS, 4500 more of less PARAFFIN OIL BARRELS, 3500 more or less LUBRICATING OIL BARRELS. The highest or any offer may not be accepted. THOMSON, JACKSON, GOURLAY & TAYLOR, 24 George Square Glasgow or LINDSAY, MELDRUM, & OATTS, 87 West Regent Street, Glasgow.

For SALE by Public Roup, in the Facility Hall, Glasgow, Wednesday the 1st June 1892, at Three o'clock Afternoon (unless previously sold privately), ALL and WHOLE the REFINERY PLANT and other (excepting Stock-in-Trade and Stores, which can be had at a Valuation,) erected on the Leasehold Subjects of 11 acres or thereby, at BRAEHEAD, in the Parish of WHITBURN and the County of LINLITHGOW. The Refinery, which is at Fauldhouse, is favorably situated for Railway access, as both Caledonian and North British Railway have sidings into the Works. The Plant has been valued for a break-up at £1700. The duration of the lease is 31 years from Martinmas 1883, UPSET PRICE £5000. Further particulars may be had, and inventories seen, on application to MONCRIEFF, BARR, PATERSON & Co. Writers, Glasgow, who will exhibit the Articles of Roup and Lease.

Alleged Theft an Oilworker.—At Linlithgow Sheriff Court on Wednesday, David Robertson, joiner, Fallahill, Fauldhouse, was charged with having, on one or more of the days between 7th Nov., 1891, and 15th Feb., 1892, at Benhar Oil Refinery, Whitburn, belonging to the West Lothian Oil Company, stolen 12 yards matting, 3 locks, a pair of compasses, chisel, cooper's scollop, a half yard of straining cloth, half-yard of bung cloth, an iron pan, 2lbs. nails, 1 lb. leather, quarter lb. glue, 3 planks wood, and 4 fence posts. Accused pleaded not guilty, and was defended by Mr James Macdonald, solicitor, Linlithgow. The first witness called was Peter Thornton, manager of the West Lothian Oil Company's Refinery Works at Benhar. Prisoner, he said, had been employed by the company for some time. 7th Nov. last the works were closed, and Robertson, with others, was therefore dismissed from the employment. A constable had called on witness and requested to be accompanied to prisoner's house. Shown the articles alleged to be stolen, witness identified all as belonging to the company. Prisoner was foreman of the joiner's shop. Thornton had been manager for the company since July last. He had been in their employment since the formation of the company. Robertson was the only joiner connected with the work.

At FAULDHOUSE OIL REFINERY FAULDHOUSE. On THURSDAY, FRIDAY, AND SATURDAY, 16th, 17th, and 18th NOVEMBER, commencing Each Day at 12 o'clock. IMPORTANT PUBLIC SALE OF MACHINERY AND PLAN, Including

On View Tuesday and Wednesday 14th and 15th inst. From 10 till 4 o'clock. Full Particulars in Catalogues, to be had on application at the Auctioneer. For the convenience of Parties returning from the Sale, Express Trains, leaving Glasgow (Central Station) for Edinburgh at 4.50 P.M., and Edinburgh for Glasgow at 4 P.M. will stop at Fauldhouse.

The first inquiry under the recently enacted Fatal Accidents Act was held at Linlithgow on Saturday before Sheriff Substitute Melville and a jury. The inquiry was into the circumstances attending the death of Robert Galloway, labourer, Mid Seat Cottage, East Benhar, on 20th July last, who was killed by the falling of a brick wall on the top of him at East Benhar. After several witnesses had been examined, the jury returned a verdict unanimously finding that Galloway met his death by accident, and that the accident which occasioned his death took place on the date mentioned at a brick wall belonging to his father, John Galloway, dealer, Mid Seat Cottage, East Benhar, situated at the old oil refinery at East Benhar, and that the death was caused by the wall having fallen upon him whilst he had undermined it to a dangerous extent with a view to the removal of the bricks composing it, and without having protected himself by propping the wall during the operation.