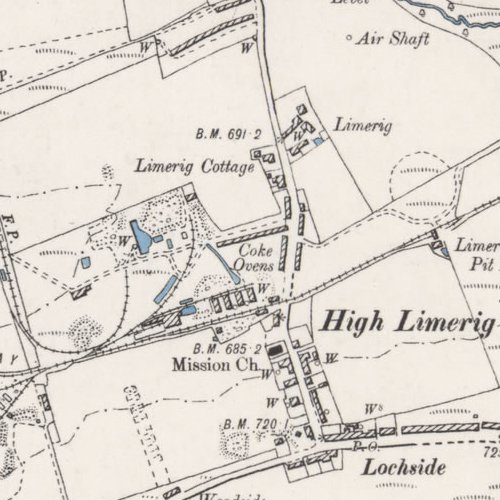 These works are noted by Redwood to have operated between 1864 and 1870 and was situated at Slammannon (sic). Redwood also noted that that Thirlstane Oil Works, Bo'ness, closed in 1867 and also owned by John Nimmo & Sons, had a refinery that "was never put into use, and was eventually pulled down and sent to Slammannon".

Evidence suggest that John Nimmo began in business as a coal master at Drumclair pit near Slammannan in 1858, having previously been manager of Kinneil ironworks, near Bo'ness. By 1868, he also operated Limerigg Colliery. In 1866, or thereabouts, he built Grangepans Oil Works, using cannel coal, including cannel from Methil shipped into the port of Bo'ness. After a short period of operation the works put up for sale. Presumably no buyer was found for them as a going concern and much of the plant was subsequently erected at Limerigg, where a seam of shale, found in conjunction with other coals, was used for oil production. Limerigg Oil Works included a refinery and produced a range of finished products including an illuminating oil, marketed as Koh-i-noor paraffin oil. The works seem to have been in full operation in 1873, when information on the pollution of Scottish rivers was collected (see snippets). The subsequent history is unknown.

The precise location of the oil works is not known, however it seems most likely to have been associated with the coke ovens and other coal processing activities at Low Limerigg.

Mapped by the Ordnance Survey of c.1896, showing the Limerigg area. 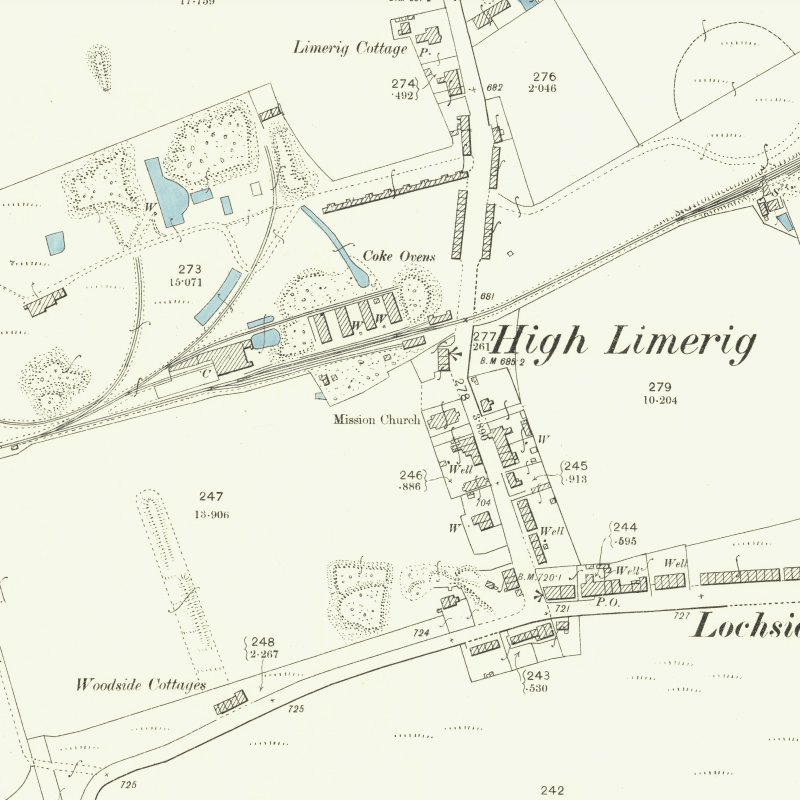 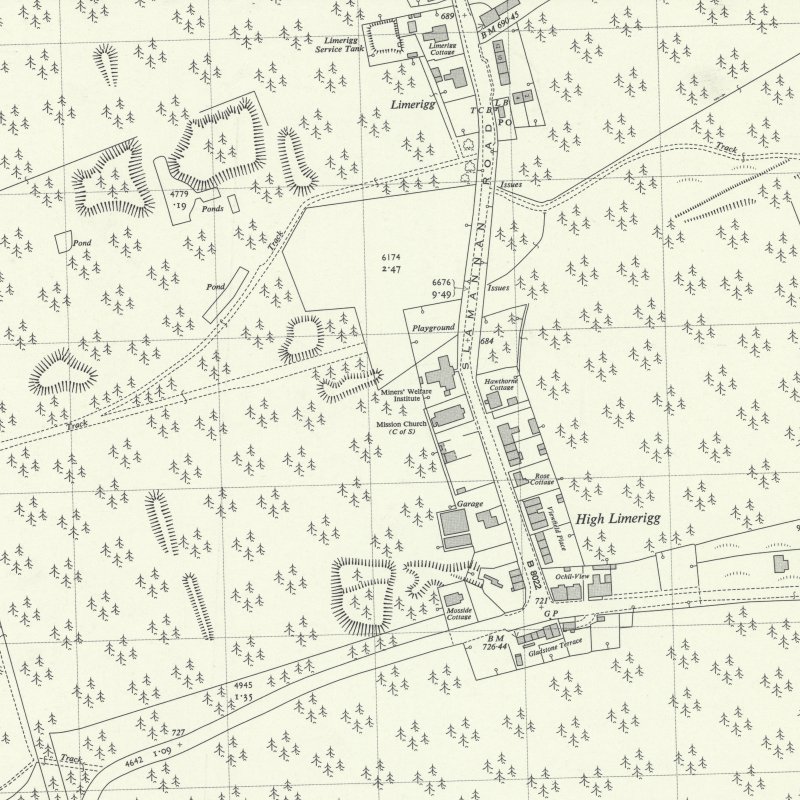 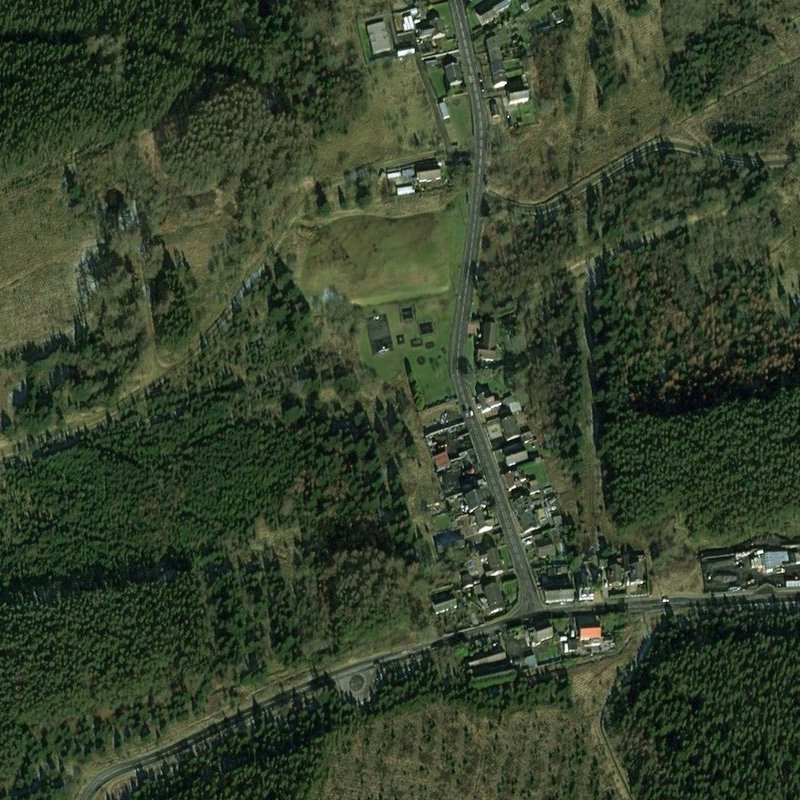 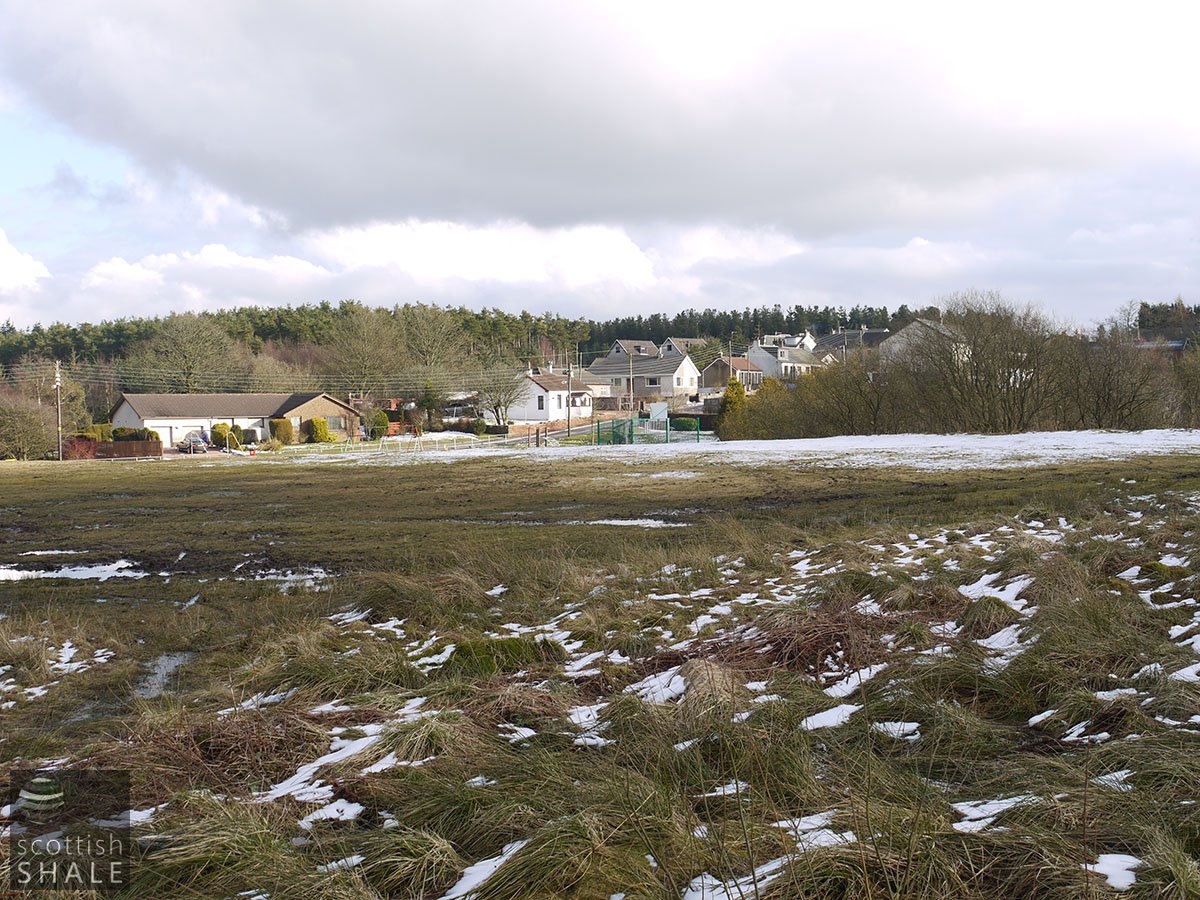 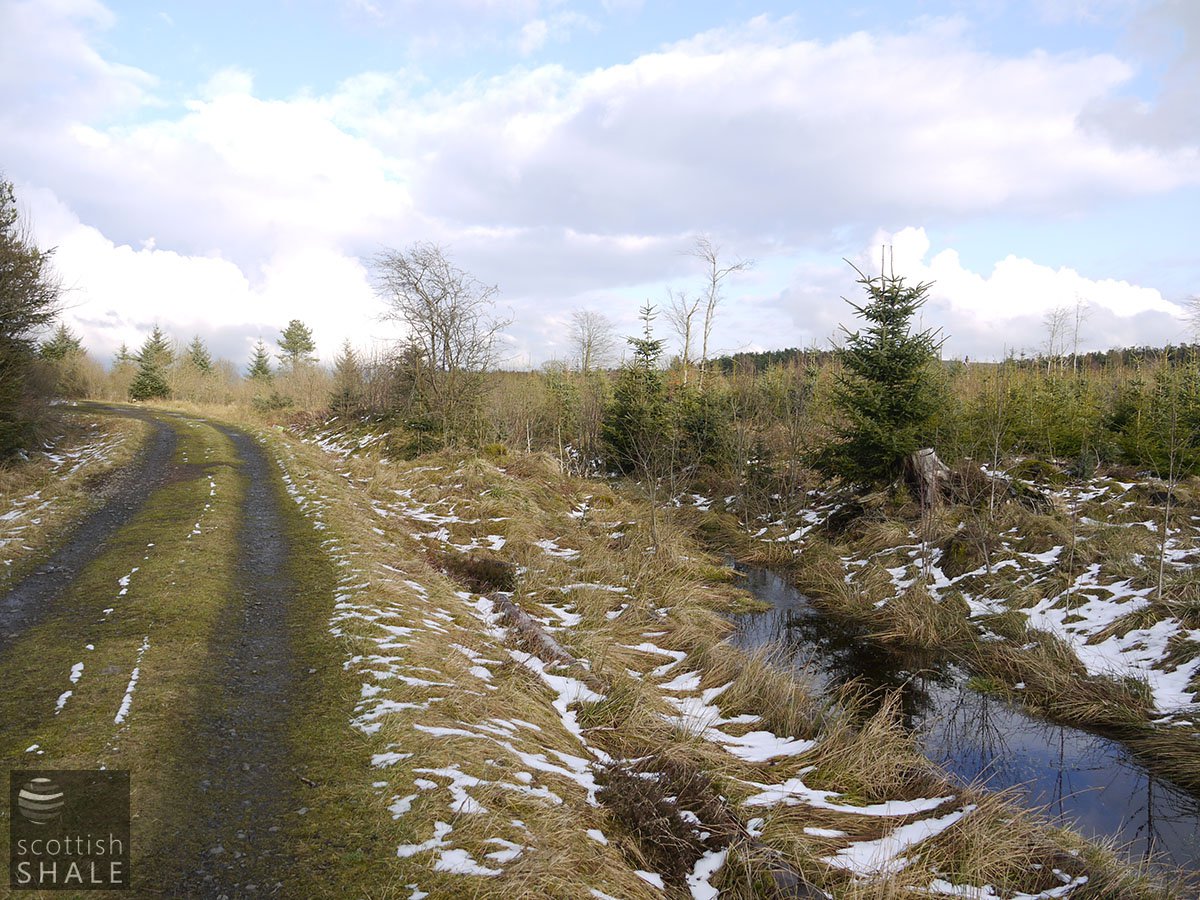 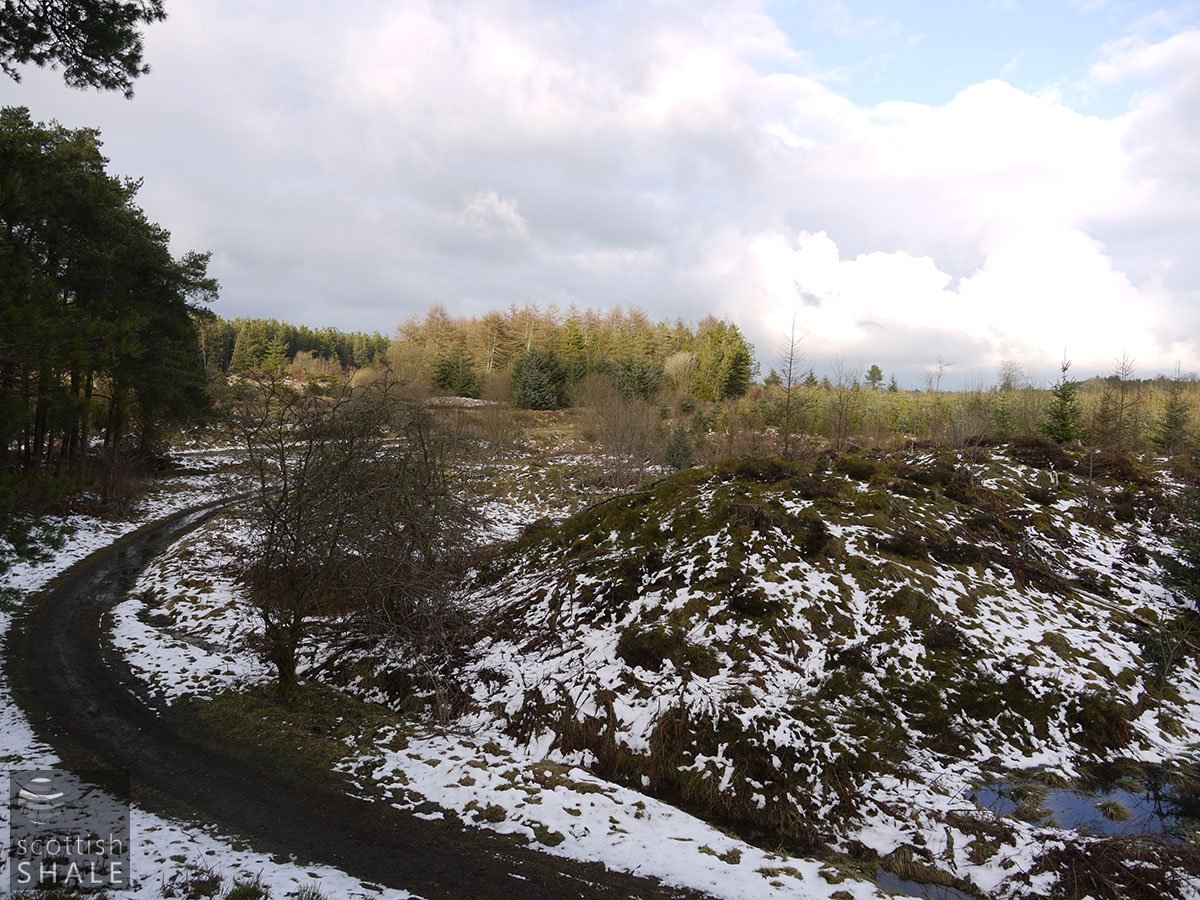 To BE SOLD (in consequence of the Proprietor going Abroad). LIMERIGG COLLIERY AND OILWORKS, in the Parish of Slamannan, as presently possessed by Mr. John Nimmo. The Lease consists of Two Seams of Coal- viz., "Vertuwell" Seam, 2ft 6in., with 9 inches of First Class Shale wrought in connection therewith, also 18 inches of Superior Fire-Clay. A pit is fitted and partially sunk to the "Lady Grange" Seam of Coal, out of which all the Seams will be wrought. The Crude Oil-Work consists of 46 Horizontal Retorts, 1 Ammonia Still, and Stock Tanks for about 20,000 Gallons. The Refinery, which is just completed, is fitted up on an approved principle, and capable of refining 30,000 Gallons Crude Oil Monthly. The Pit Workings are in good order, and the Oil-Works are also in first-rate repair. There is ample Plant on the ground for carrying on a very extensive business. There are also Workmen's Houses on the ground. The whole Works are well laid off, capable of great extension and are connected by a branch from the Monkland Section of the North British Railway. The Lease is on advantageous terms, and has a series of years to run. Every information requisite can be applied by applying to JOHN NIMMO, 35 Clerk Street, Edinburgh.

THE MINERS' STRIKE AT SLAMANAN.

Sir, —The strike amongst the miners of this district still continues, and judging from present appearances no hopes of early settlement are entertained. Most the works the miners have either left or are about to leave the masters' houses. I may mention however, as an honourable exception, the works of John Nimmo, Esq., of Limerigg Oil work and Colliery, who, I understand, will not resort to the severe measure of ejecting those of his workmen who are on strike from their houses.

SLAMANAN. Presentation. —On the evening of the 21st ult. the workmen in the employment of John Nimmo, Esq., met in Lochside schoolroom to do honour to Mr Robert Walkinshaw, their respected manager. Mr Wm. Gardner being called to the chair, briefly introduced the business of the evening, and requested Win. Beveridge to make the presentation. Beveridge then, in few well-chosen remarks, handed over to Walkinshaw a handsome gold watch and seal also, a very elegant gold ring to Mrs Walkinshaw. Mr Walkinshaw very feelingly replied, and observed that this was the fourth time that the workmen uuder his charge had shown in a tangible form their esteem for Mrs Walkinshaw and himself during a term extending over years. The rest of the evening was spent very harmoniously in song and sentiment. We may state the watch is one of Bent's of London, and was supplied by Barnett, 1 Argyle Arcade, Glasgow.

Evidence of John Nimmo Paraffin Oil Manufacturer, Limerigg Coal and Oil Works, Slamanan My works are situated on a stream, a tributary of the Avon. Employ 70 hands. Rateable value of works, £800. The bed of the stream has not silted up. My works are not affected by floods. The stream is no polluted by works above, nor by mines. Obtain supply of water from gathering ground, but cannot give the annual consumption at my works. Use yearly, bituminous shale, 2000 tons; sulphuric acid, 80 tons; and caustic soda, 10 tons. Produce yearly, crude paraffin, 65,000 gallons; lubricating oil, 10,000; illuminating oil, 30,000 gallons; and sal-ammoniac, 3 tons. We do not purify the liquid refuse produced at our works, but we burn it under the furnaces. Use steam, 10 nominal horse-power. Consume yearly 1000 tons of coal, the ashes from which are used to fill up hollow places and repair walks. The excrements of my workpeople are used for manure. Have no suggestions to offer as to the best means of avoiding pollution in future, or as to the conservancy of rivers and streams.