The notice of the public roup of the works (see snippets below) indicate that they were sited:

"about a quarter mile from Holytown Station, Caledonian Railway, and are connected by a Branch with the Main Line"

Mapped by the Ordnance Survey of c.1864, centred on the supposed site of the oil works. 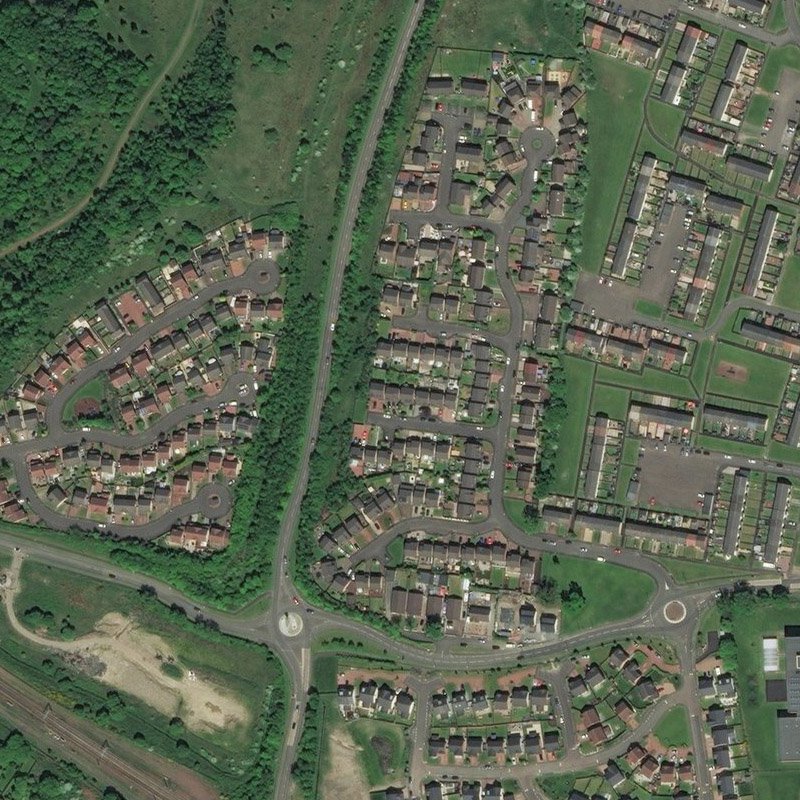 TO BE SOLD BY PUBLIC ROUP, AT WOODHALL OIL-WORKS, BY HOLYTOWN, On Monday, 23rd MARCH, at Half-past One o’clock, The Whole PLANT and STOCK-IN-TRADE at the above Works, comprising 15 Retorts, complete, 3 Oil Cisterns, (two of them can be used for steam purposes), about 22 Tons of Pit Rails, Set of Hutch Weighs, Hutches, Wheelbarrows, Planks. Office with Furnishings, Stable with Furnishings, Quantity of Pitwood, Sleepers, and other wood, about 200 Crude Oil Barrels, Bellows, Anvil, and other Smithy Tools, Scrap Iron, &c., 1 Pit Pony and 2 sets of Pony Harness, about 15,000 Gallons Crude Oil. The usual Credit or Discount. The Works are distant about a quarter mile from Holytown Station, Caledonian Railway, and are connected by a Branch with the Main Line. J. SHIRLAW & SON, Auctioneers, Wishaw 2nd March 1868.

HOLYTOWN. SALE OF OILWORKS – On Monday the oilworks belonging to Messrs Gibb and Neish, at Woodhall, were exposed by public roup, when 15 retorts were sold to Mr Ferrie, of Calderbank, for the sum of £165, and 1500 gallons of crude oil to Mr George Roberton, of Glentower, at about 3d per gallon.

MINERAL FIELD ON WOODHALL ESTATE TO BE LET.-The COAL IRONSTONE and FIRECLAY in the LEGBRANNOCK, KENNELBURN and CREEWOOD DIVISIONS of the Woodhall Estate, In the Parish of Bothwell, and extending to about 900 Acres, are to be Lot from Whitsunday,1870, in One or more Lots, as may suit applicants The Minerals are already partially wrought and mines are in active operation thereon. The Monkland Canal Terminus is within the field, and access to the Caledonian Railway near Holytown Station may be had by a private branch railway.